Storm Imogen was gearing up, so it was a very gusty day. On Crosby Marine Lake the windsurfers and yachtsmen were shooting around at great speeds. 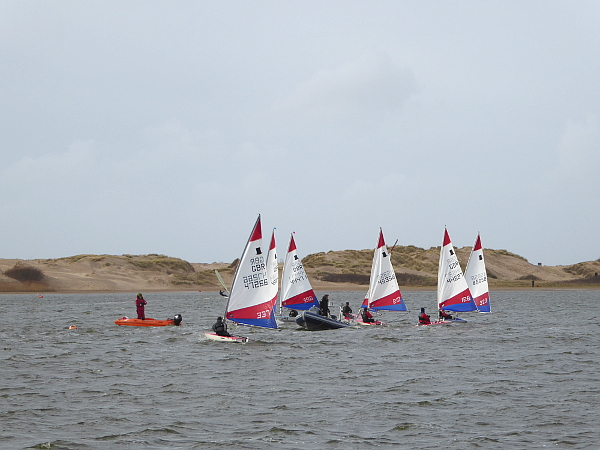 The grass banks around the Boating Lake had small flocks of Black-headed Gulls, with a few  Herring Gulls. Further over another flock had some Oystercatchers mixed in with them, and also one Lesser Black-backed Gull, which John thought was from the darker northern race, now referred to as a Baltic Gull, but not yet formally split from the LBB. The BHGs were showing a mix of white and dark heads, as their spring plumage grows in. 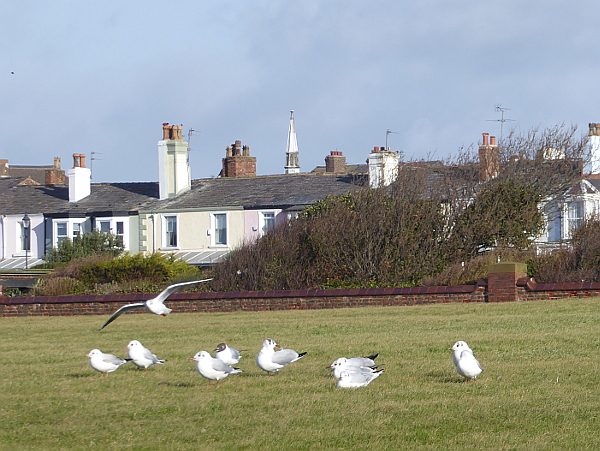 There were small flocks of Starlings, a couple of Magpies strutted about and some twittering Goldfinches flew over. The Boating Lake had more Gulls, some Mallards and a pair of Tufted Duck.  We were hoping for a Little Gull, as several have been seen on the move on the Lancashire coast recently, but no luck. A Skylark ran up a dune face and launched itself, flutteringly, into the wind, but it was too gusty for it to get going with its song. But another one did manage a song flight a few minutes later. On the sea side of the dunes the wind was whipping sand into our faces and piling  the waves up. 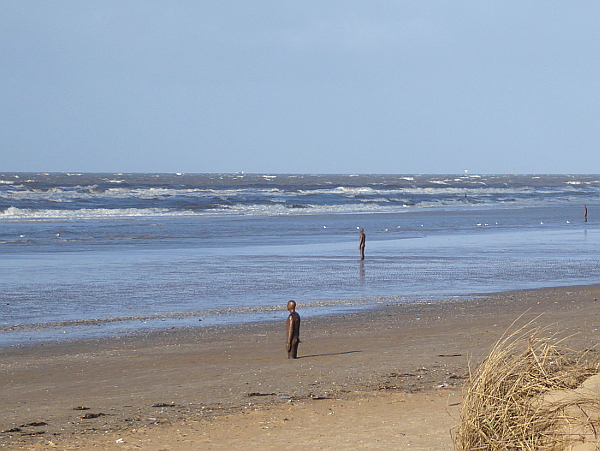 We went a short way northwards on the prom, over big sand drifts partly blocking the way. A Carrion Crow was picking through the seaweed on the beach, and we saw a fly-past of Cormorants. We soon turned back inland, past Harbord Road pumping station, and headed for the shelter of the seafront gardens. In Beach Lawn Garden the lawn edges had flowering Daisies, Shepherd’s Purse and Groundsel, taking advantage of the less-intensive management of the grass now that the Council has cut back. We lunched in Adelaide Gardens around the plinth which used to hold a Toposcope, a structure like a sundial, but with lines pointing to the things that could be seen in various directions. The Friends of Waterloo Seafront Gardens are planning to restore it soon.  There were plenty of House Sparrows in the shrubs and we admired the clumps of carefully-placed Holly trees. 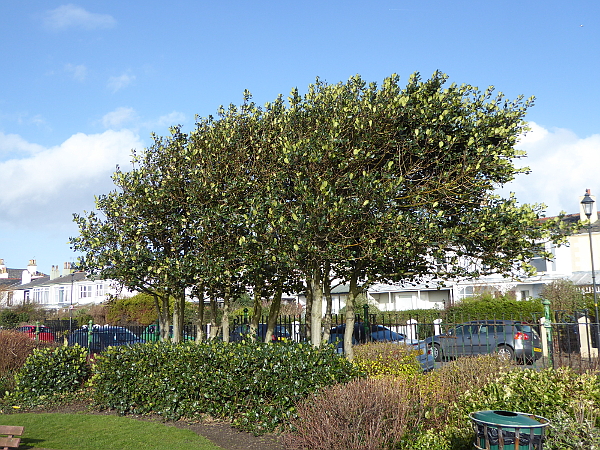 In Crescent Garden we spotted a Collared Dove, several Wood Pigeons, and also a shrub bearing small white flowers and pink buds, rather like Blackthorn, but it wasn’t. I think it’s an early plum, the Myrobalam Plum Prunus cerasifera. Mitchell’s Field Guide to the Trees of Britain says it is normally the first Prunus in flower, often mistaken for Blackthorn. It’s supposed to flower in early March, but everything is so early this year. 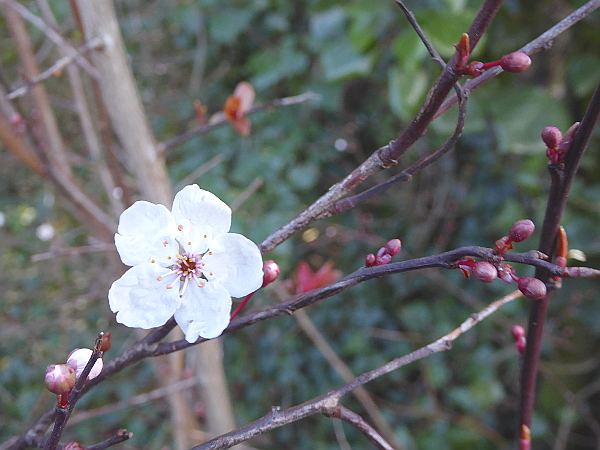 There are also several Fig shrubs in Crescent and Marine Gardens,  bearing many unripe fruit. 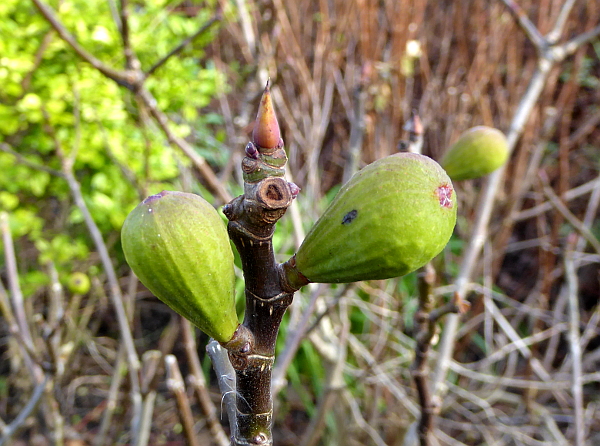 When I was in Marine Garden on 10th January, I commented that the Holm Oak there appeared to have completely failed to produce acorns, perhaps because it was on its own. But it isn’t alone, there’s another one on the opposite (seaward) side of the same garden, so it isn’t for lack of fertilisation that the acorns failed to develop. Today I also spotted evidence that there had been SOME acorns on the tree, as some twigs bore empty acorn cups. But this must just be something Holm Oaks do, perhaps the opposite of a “mast” year, an ”un-mast” year! 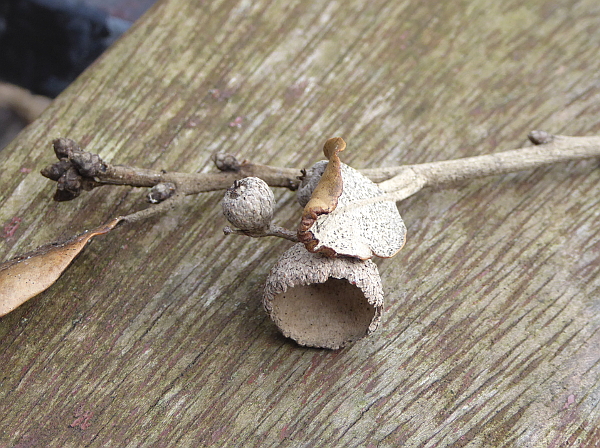 .
Near the Rockery in Marine Garden were our Trees of the Day, a small grove of three multi-trunked Willows, clustered around a small pond and shaped to the prevailing wind. The bare twigs were a dark reddish-fawn. 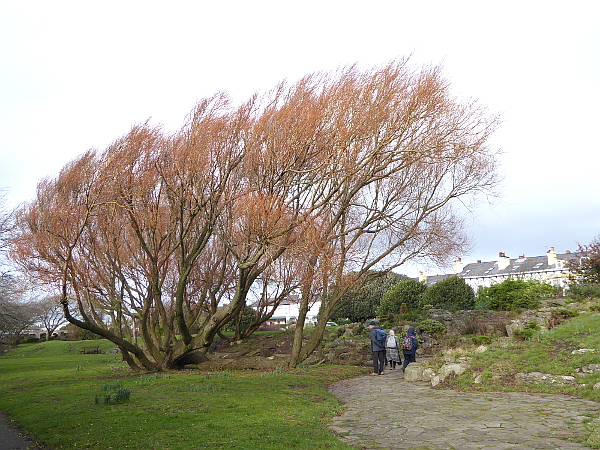 The twigs were all very upright, but some low trunks had grown parallel to the ground and had re-rooted. They were clearly not Weeping Willows, but were they the non-weeping type of the same species, the White Willow Salix alba? We looked up willows in the book and decided they might have been Crack Willows Salix fragilis because Mitchell talks of “long slender upswept branches” and “old trees with heavy, twisted, low branches”. He doesn’t say the winter twigs are red, though, calling them “pale orange in March, before the leaves appear”. We need to look at them again, when the leaves are out. 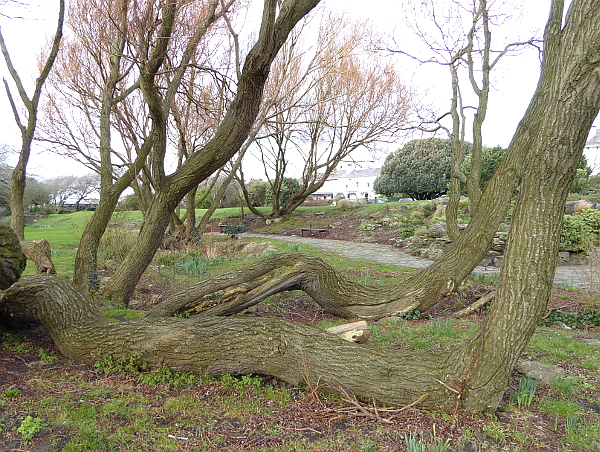 I walked home through Victoria Park, seeing more of that white blossom, and blooming miniature Daffodils and Snowdrops.

Public transport details: Train from Central at 10.23, arriving Waterloo 10.45. We were back at Waterloo Station in time for the 2.25 train, arriving Liverpool Central 2.45.