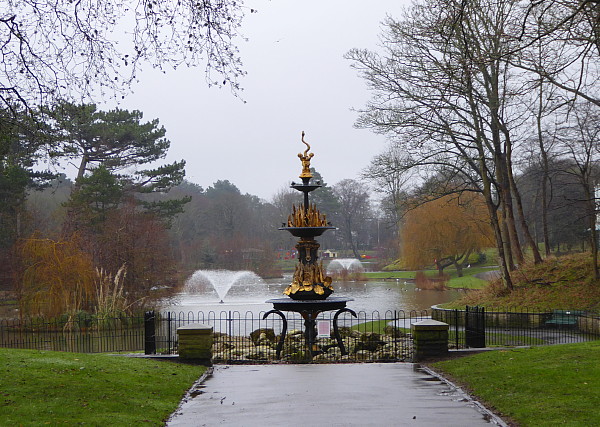 Near the Park entrance we noted a Blackbird and some Wood Pigeons, and Eric spotted a Treecreeper. We also heard a Nuthatch there when we were on the way out. On the lake were Mallards, Coots, Moorhens, three Tufted Duck, Black-headed Gulls, Herring Gulls, a pair of Mute Swans (with no cygnets) and a single Cormorant on the edge of the island. The water was very high, lapping over the grass edges but wasn’t quite onto the paths. Heavy rain all day had been forecast, but it was only a bit drizzly, the worst being the drips from the trees overhead. 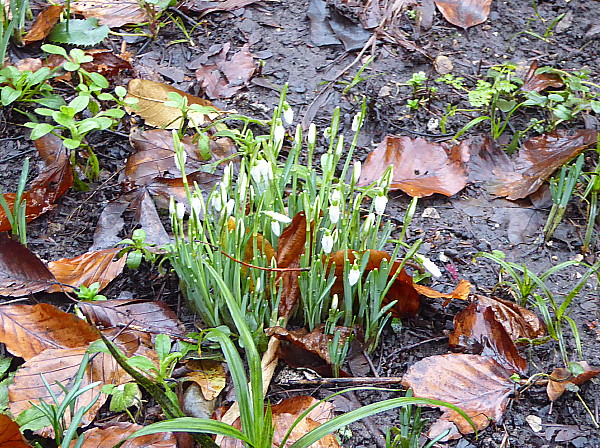 The spring bulbs were struggling out. Some clumps of Daffs had one or two buds open, yellow Crocuses made a splash of colour, and the Snowdrops were just on the verge of flowering. 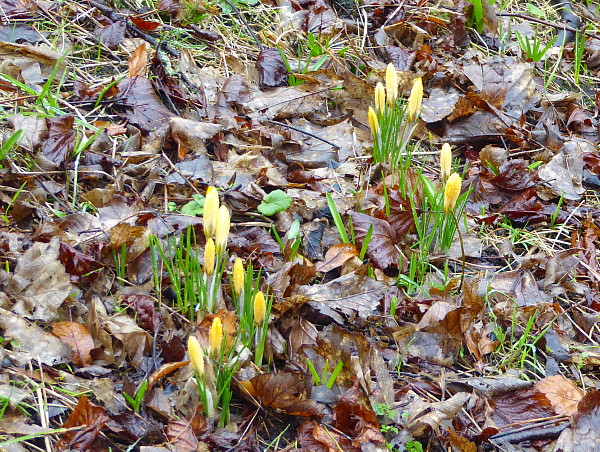 Near the northern edge of the park, next to the Sensory Garden, is a Specimen Tree Garden holding “a number of large unusual specimen trees including Persian Ironwood, Magnolia, Liquidambar, Gingko and Katsura.” 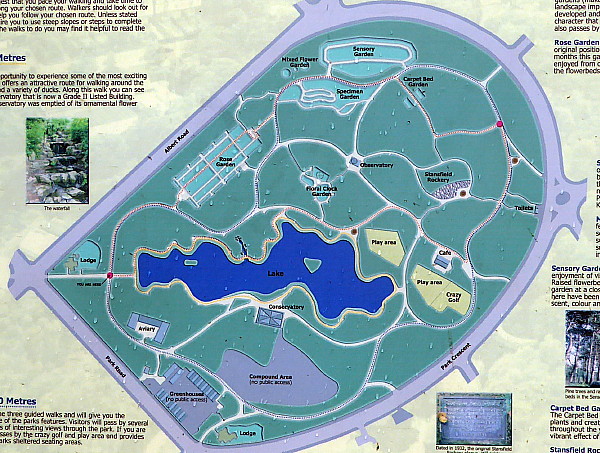 Some are labelled, and we looked at the Persian Ironwood and the Katsura, and also a Dawn Redwood with a label, but there’s not much to see on trees at this time of year. We also noticed a couple of Japanese Pagoda trees (which are really Chinese) Styphnolobium japonicum. The park holds two which are the Lancashire County Champions for height, at 16m (52 feet), but this one was less than half that size. 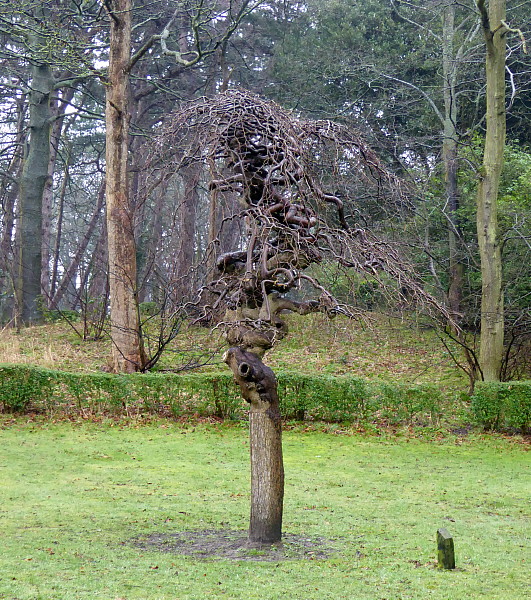 We lunched at the octagonal shelter at the north end of the lake, which wasn’t much protection from the drizzle, so we decided to head into Southport and visit the warm and dry Atkinson (Museum).   In the south lobby is the Crossens canoe, suspended and lit from below and looking like a whale. 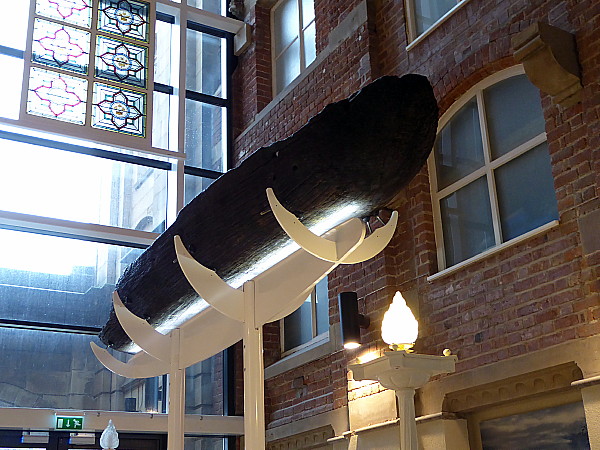 It was found on a drained section of Martin Mere in 1899 by a farmer. Carbon dating says  it is from about AD 535, although when it was found it had been repaired with small lead sheets and there was a musket inside it.  Was it still in use many hundreds of years after it was made, or was it found and re-used when it was about a thousand years old? 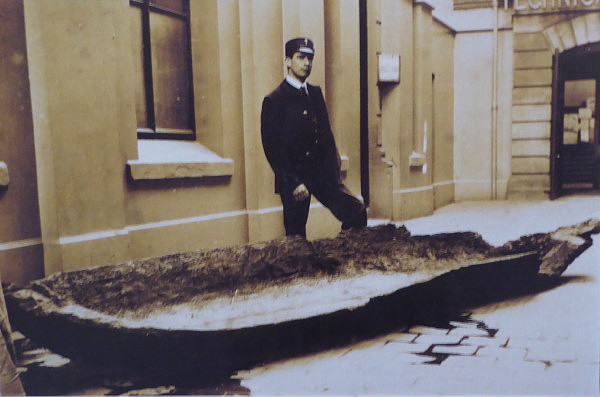 On the first floor was an exhibition of Lord Street memorabilia, including pictures of the earliest hotel in the area. A man called William Sutton, known to locals as The Old Duke, built a new inn in 1792, which he called South Port Hotel, but the locals, who thought he was mad, called it Duke’s Folly. The Hotel survived until 1854 when it was demolished to make way for traffic at the south end of Lord Street. Today the site is marked with a plaque and the street takes his name, Duke Street. On display was a tiny ivory model of it by A W Kiddie c 1900. The building is about three inches tall and the fence only half an inch. Of course, we don’t approve of carving in ivory nowadays, but it was a wonderful material for fine work. 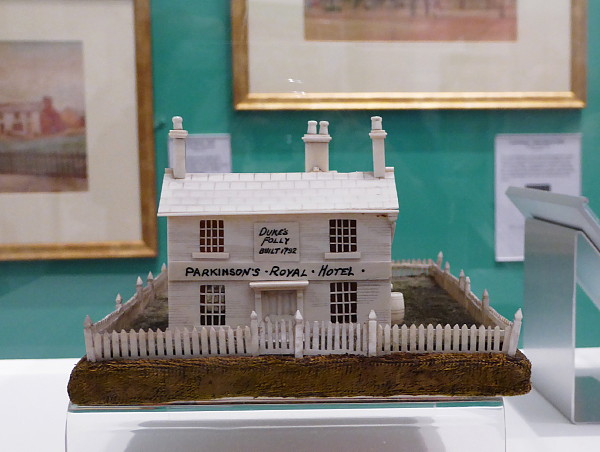 On the second floor is an exhibition on the history of Sefton. Their website says they “hold important collections of natural history and taxidermy with many local species represented.” We wondered if that would include the collection of stuffed birds that used to be in Churchtown Botanic Gardens Museum, but when we asked an attendant she said many of their heads had fallen off! However, they did have a stuffed fox, owl, red squirrel and badger, and six cases of stuffed birds, said to be the work of Cecil Bishopp of Oban and W R Hine of Southport, two of the best taxidermists of their time. The birds were Oystercatchers, a Heron, a Cormorant, a Green Woodpecker, a Mandarin duck and four mixed Robin and Thrushes. The cases were darkened and you had to listen to a series of bird calls, identify them and press the right button, whereupon the appropriate case would light up. 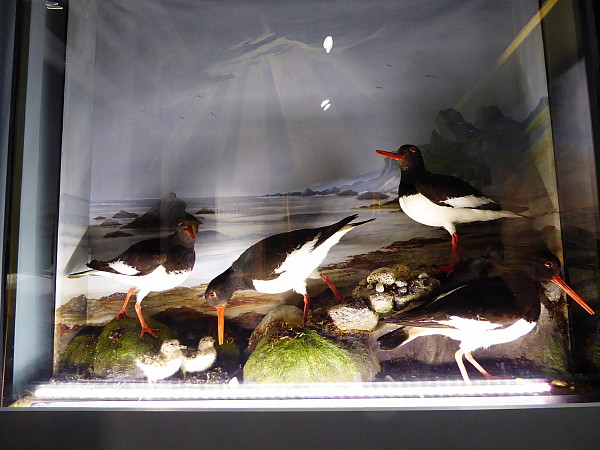 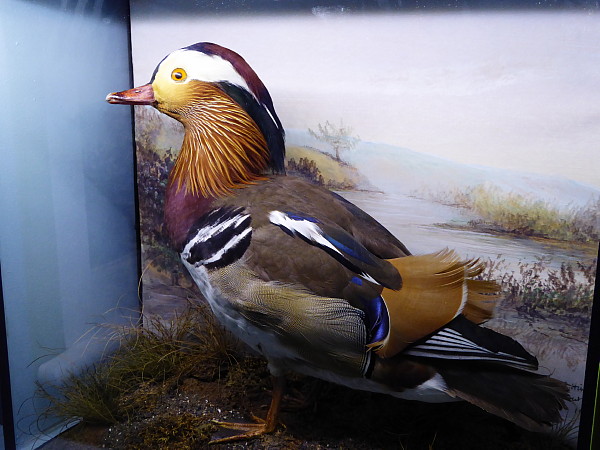 Public transport details: 47 bus at 10.10 from the temporary bus stop in Victoria Street, arriving Albert Road opposite Hesketh Park at 11.20. We left the park on the southbound 47 bus at 1.17, arriving Southport about 5 minutes later. After the museum, we just missed the 2.28 train so we took the X2 bus on Lord Street at 2.42, arriving Crosby at 3.25, and Liverpool City Centre at about  4pm.