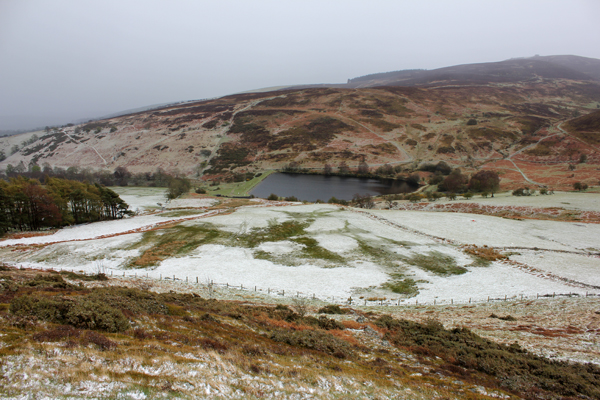 Richard Surman, DaveB and I returned to Cilcain near Mold in Flinshire, North Wales for a circular walk that we did a few years ago. Singing Chiffchaff, Wren, Prune, and Blackbird greeted us on arrival. A Silver Birch Betula pendula had a gall called Witches’ Broom caused by a Fungus Taphrina betulina which stimulates the tree to produce numerous extra shoots, resulting in a dense nest-like cluster. A mixture of Wild Daffodils and garden cultivars including some with ruffled, double centres lined the country lane edges. Dog’s Mercury Mercurialis perennis was very prevalent, Dave pointed out a little wildflower that is easily overlooked because it is so small – Moschatel a.k.a Town Hall Clock Adoxa moschatellina. Each stem bears five flowers, one on the top and one on each of the four side faces of a cube. There was also Wood Anemone Anemone nemorosa, Garlic Mustard Alliaria petiolata, Greater Stitchwort Stellaria holostea, Lesser Celandine Ranunculus ficaria that had taken a battering from the recent wet weather, Wood Forget-me-not Myosotis sylvatica, English Bluebell Hyacinthoides non-scripta and Ramsons Allium ursinum. As we walked up the lane Blue Tit, Great Tit and Blackcap were added to the list and after hearing a familiar burst of song we located a male Redstart perched on a fence post on the edge of a copse before flitting around briefly with a Willow Warbler putting in an appearance close by.

We scanned the first of the small fishing lakes which had a couple of Little Grebes diving on the lower lake and a pair of Tufties floating on the higher lake. 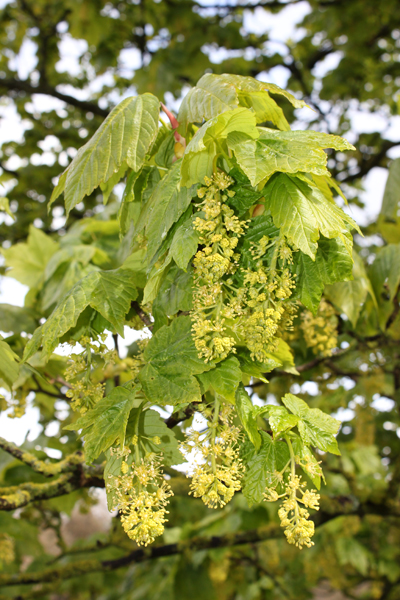 The Sycamores Acer pseudoplatanus had already developed pendulous clusters of the monoecious yellow-green flowers called ‘racemes’. Marsh-marigold Caltha palustris and Opposite-leaved Golden-saxifrage Chrysosplenium oppositifolium was growing along the edge of a bubbling stream. A Song Thrush sang it repetitive notes and a Yellowhammer asked for a ‘little bit of bread and no cheese’ from the top of a flowering European Gorse Ulex europaeus before taking flight a dash of yellow against a dark grey sky.

We began climbing onto the moor passing the edge of the larger fishing lake which held a couple of Canada Geese. There was some flowering Bilberry Vaccinium myrtillus and a few flowers of Tormentil Potentilla erecta. It was quite squelchy in places underfoot and we chose the driest route traversing a few seasonal streams draining off the moor. Then the darkening sky unloaded its first hailstones forcing us to take what little shelter there was under a Hawthorn Crataegus monogyna. As the hail eased off we continued noting the odd Raven and Carrion Crow and another migrant a female Wheatear. Richard spotted a small mammal scurrying through some hail covered bracken as we approached I had a glimpse as the Vole headed into cover. 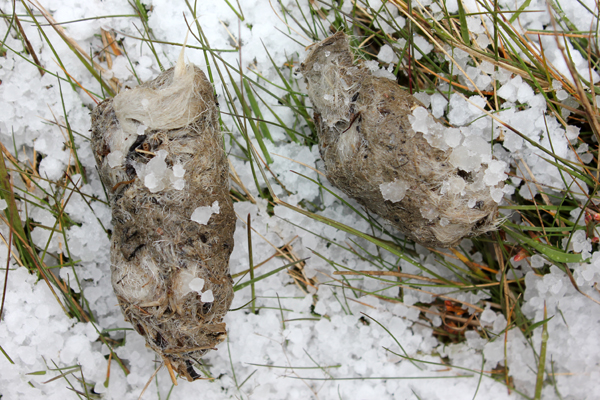 I found a couple of rather wet Owl pellets beside the track amongst the hailstones – Richard mentioned that there are Tawny Owls in the area – they looked about the correct dimensions for those. Another band of hail moved through – we weren’t the only nutters out and about though – a couple passed us, a few mountain bikers and half a dozen lads on the Duke of Edinburgh scheme stopped to check the route to Moel Famau. 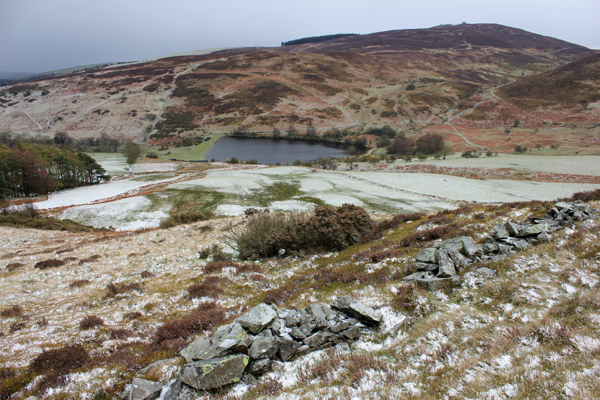 The hail eased again allowing great scenic views over a wintery looking landscape. We stopped for lunch and a much needed slurp of hot coffee. Bright orange cushions of the algae Trentepohlia aurea were on the stone wall behind the wooden seat, the orange pigment haematochrome (β-carotene) hides the green of the chlorophyll. 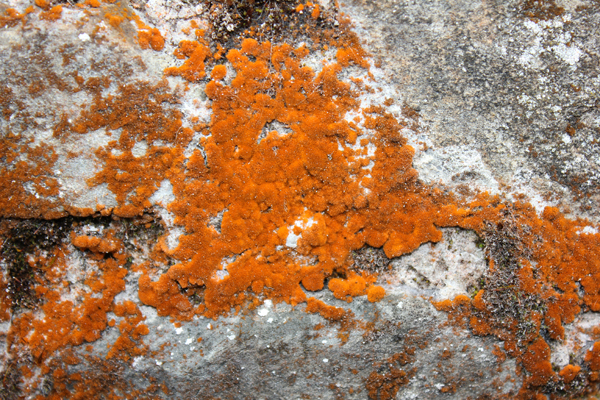 Dave was chatting to me when Richard quite calmly said ‘sorry to interrupt’ there are twelve Ring Ouzels in that bare tree over there. Unbelievable! They soon took to the air calling a faint ‘tac-tac’ as they headed north following the line of the Clywdians. I said I’m sure I can hear more calling and steadily more took to flight from an adjacent Larch copse. We counted them off reaching a tally of 18 individuals – roughly a half/half mix of males and females – an utterly fantastic spectacle! Then a Cuckoo called from the copse sitting on top of one of the Larches briefly before taking to the air looking extremely raptor like as it too followed in the same northerly direct as the Ring Ouzels.

We began descending noting a couple more Wheatears hopping on the short swarthy grass and stopped again when a bubbling noise came from the heather – Black Grouse! We decided it was probably in the dip over the top of the heathery hillock so was unfortunately out of view.

We headed through a gate into more wooded conditions – a few Common Dog-violets Viola riviniana and Primroses Primula vulgaris in flower. Richard mentioned that he thought this would be a good spot for Redstarts and one appeared on cue. We had a couple of Mistle Thrushes in a field, also Chaffinches and Goldfinches before stopping again for the Highland Cattle munching away at their hay. 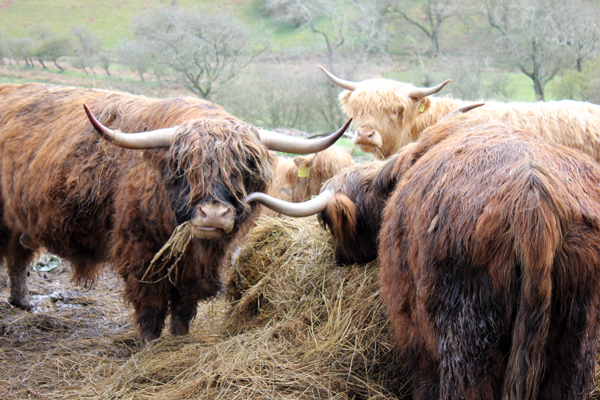 As we approached the village the sun put in an appearance and more Wildflowers appeared in the verges with White Dead-nettle Lamium album, Herb-Robert Geranium robertianum, Cow Parsley Anthriscus sylvestris, Crosswort Cruciata laevipes, the leaves of Greater Celandine Chelidonium majus, Green Alkanet Pentaglottis sempervirens, Red Valerian Centranthus ruber and Greater Periwinkle Vinca major. A Rook perched on the electricity wire outside a cottage – undoubtedly from the nearby Rookery of around 40 nests. A House Martin zipped by and I had a brief glimpse of a Rabbit Oryctolagus cuniculus. A Tree in one of the gardens had a few layers of old Artist’s Bracket Ganoderma applanatum. 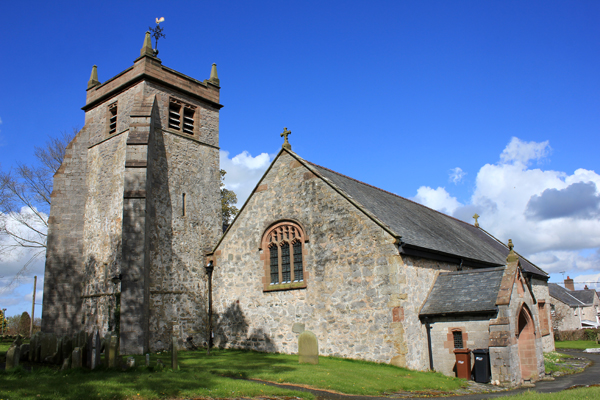 We had a nose around the churchyard of St Mary’s adding Greenfinch to the list and noting a few plants with flowering Grape-hyacinth Muscari neglectum and Petty Spurge Euphorbia peplus growing from the cracks between horizontally laid gravestones. 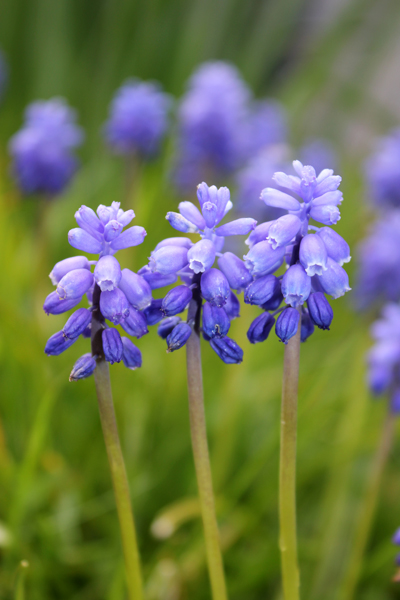 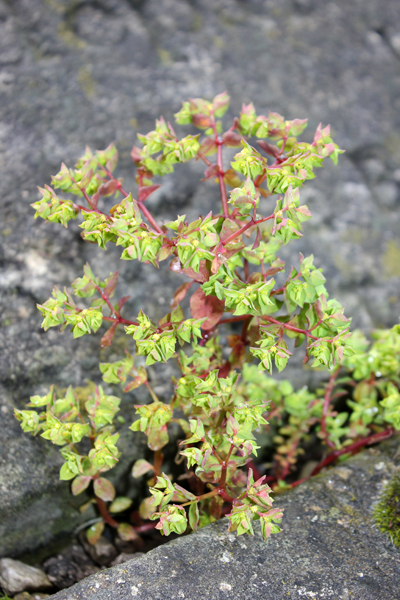 The water in the pond besides the Cilcain waste water treatment building was barely visible the surface covered with the erect stems of Marsh Horsetail Equisetum palustre and a scattering of Marsh-marigolds Caltha palustris.

Another migrant as a Swallow zipped over the car as we headed back down the lane for the return journey home after a quite unforgettable day!