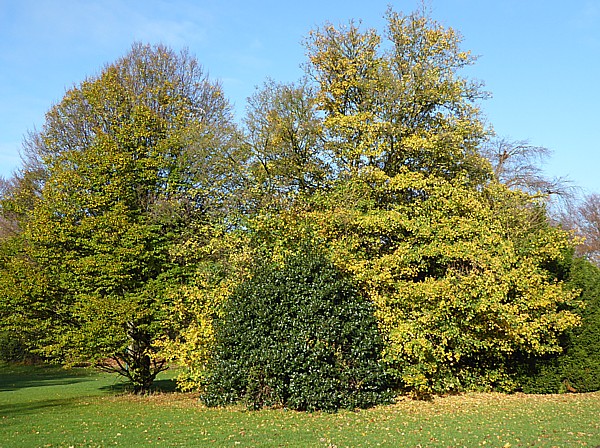 Before meeting the group I had a look at the trees in Williamson Square. The ones on the south side (Richmond Street) are Ginkgos, and one of the four on the other side, outside the football shop and near the Playhouse, has no leaves, so it will have to wait for Spring. The three others are small evergreens, but not conifers, and I think they are Holm Oaks. 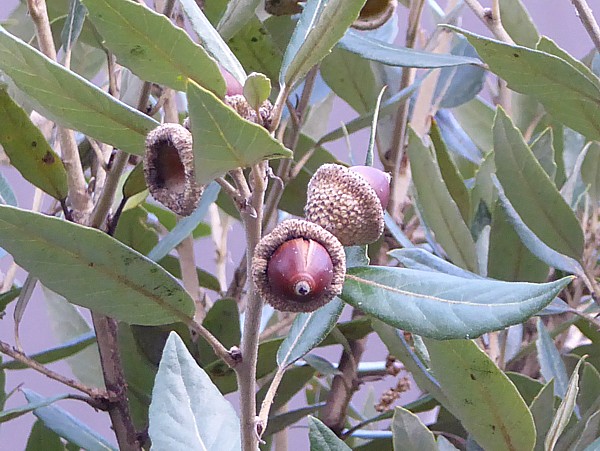 The soil under the grid at the base of one of them had been excavated by some small animal, and there was a burrow. I swear I saw something’s nose just pulling back into the hole. A rat? While I waited to see if it would re-emerge two council fellows in yellow jackets came along, one with a white plastic bucket and the other with a large pick. They were sure it was rat diggings and they trowelled rat poison down the burrow. 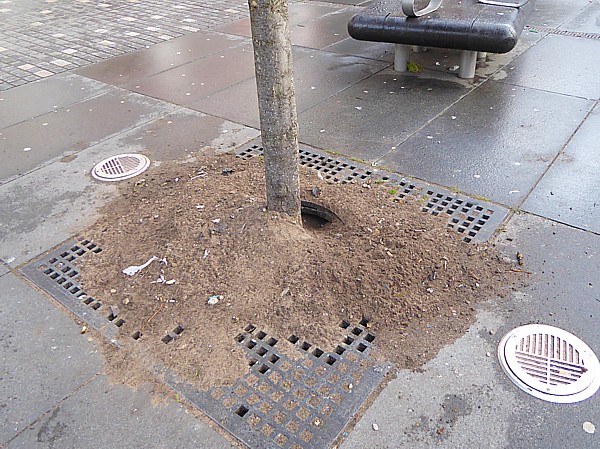 We were joined by two ex-MNA members, Joyce and David, who are also learning about trees. There was a Robin in the Lower Park, and many Grey Squirrels mooching for handouts. On the lake were Mallards, Canada Geese, Coots and a Moorhen. For a few years we have been noting a family of odd black ducks here.  They had been five when we first spotted them on 13th November 2011, but only two survived to 3rd March 2013 and 2nd Feb 2014. This must be the same two again, now coming to the end of their fourth summer. 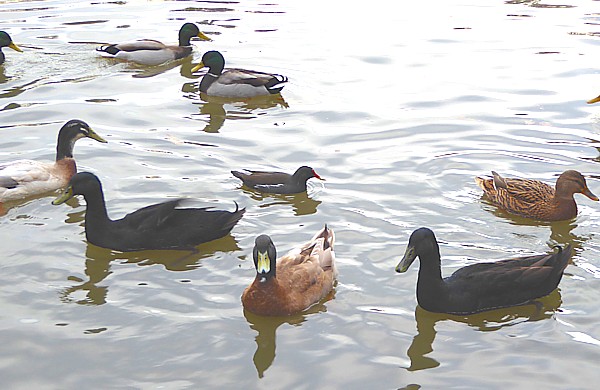 There were some very dark evergreens in the deep shaded shrubberies but they were far too droopy to be Yew. In retrospect, I suspect  they were Western Hemlocks and I should go back and look again. 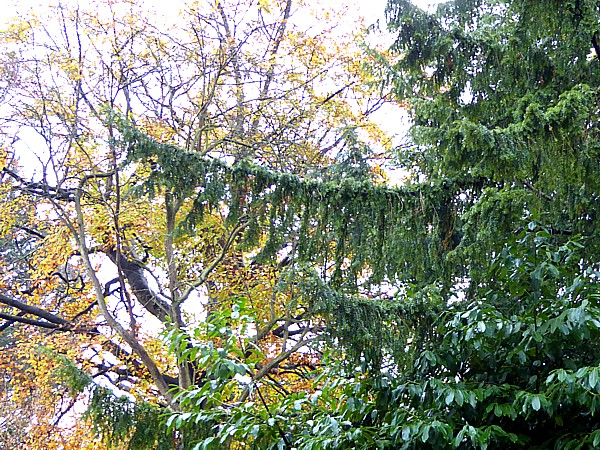 The Swiss Bridge was blocked off and partly clothed in scaffolding. Vandalised by fire a few weeks ago, apparently. High up on some trees there were bat boxes, and we looked at an old-looking gnarled tree which probably belonged to the park’s Black Mulberry, of which they are quite proud. They advertise their Cucumber Tree, too, but we didn’t spot that one. Another small tree in a glade was probably a Persian Ironwood, perhaps only about ten years old. We had a good look at a Turkey Oak, noting the deeply indented leaves, the whiskery buds and the cracked bark with orange showing through. 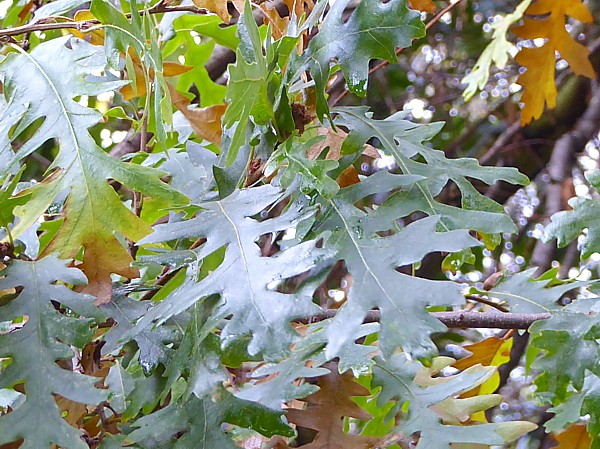 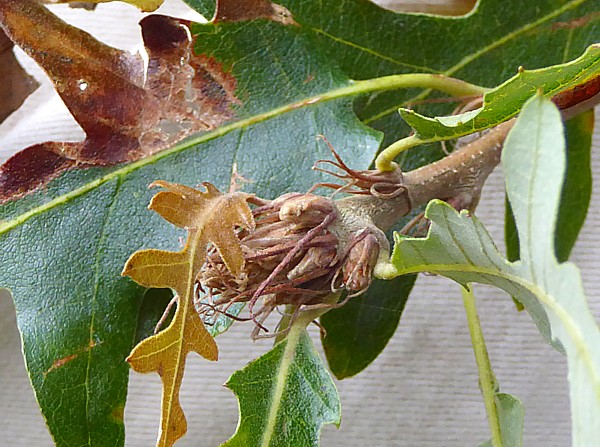 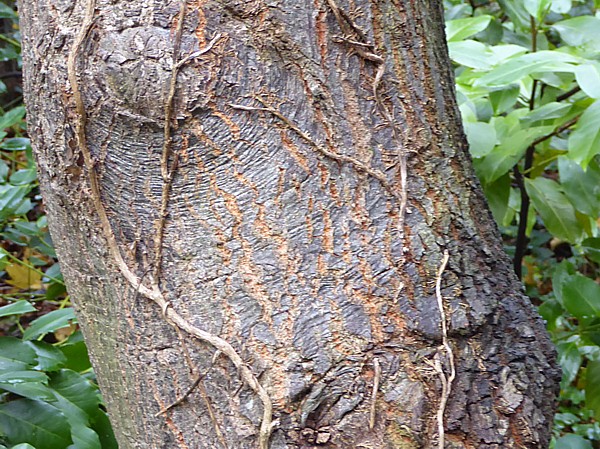 Christine spotted two Great Spotted Woodpeckers silhouetted high against the sky. They were pecking at the branches and making pieces of bark fly. Goldfinches and Greenfinches were also in distant trees. On the eastern edge of the lake was one of the trees I was hoping to spot, a Camperdown Elm Ulmus glabra ‘Camperdownii’, the weeping version of Wych Elm. The pendulous top is grafted onto a normal Wych Elm trunk. It’s the Cheshire county champion for girth, at 93cm. (There’s another one in Stanley Park in the “Druid’s circle” of London Planes.) 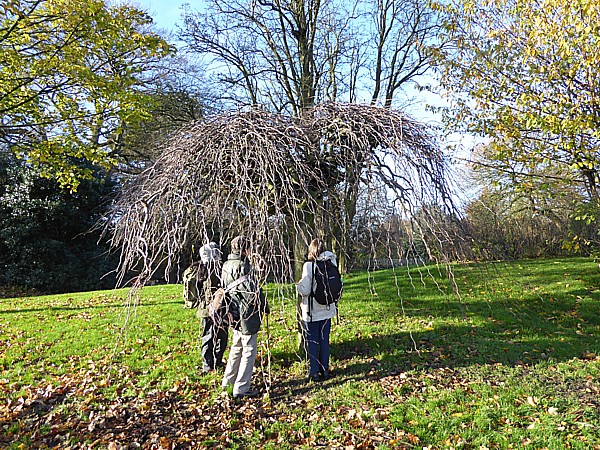 There were about half a dozen Redwings in a Holly tree, gorging on red berries. They probably came down from Scandinavia on the sudden cold winds we had this week. After lunch at the Visitor’s Centre we headed off to the Upper Park, where a Mistle Thrush scolded us from high overhead. Nearby was the thickly burred stump of an old Sweet Chestnut. 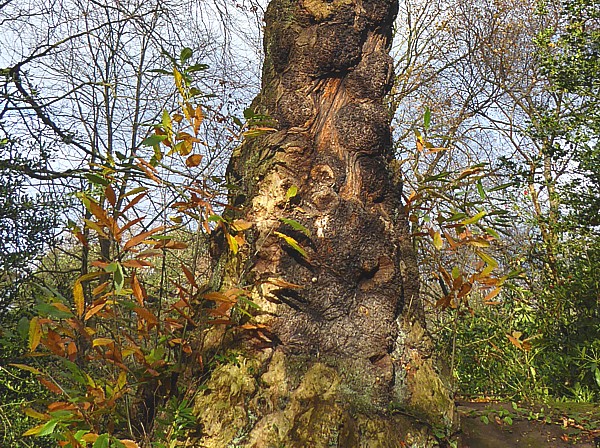 As we approached the westernmost gate, at the junction of Park Road North and Park Road West we spotted two interesting trees over the wall in the garden of the Castellated Lodge. One was a very big Monkey Puzzle, with big brown globular spiky fruits on it, which take two years to mature. 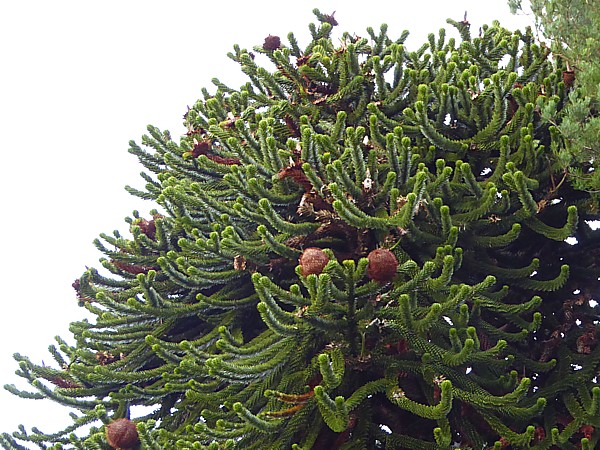 A few yards away was our Tree of the Day, a huge old Tulip Tree, with just one leaf left to clinch the identification, which was covered in pointed erect fruits, standing up against the sky like candle bulbs. They only produce fruit this prolifically in hot summers, according to Mitchell. 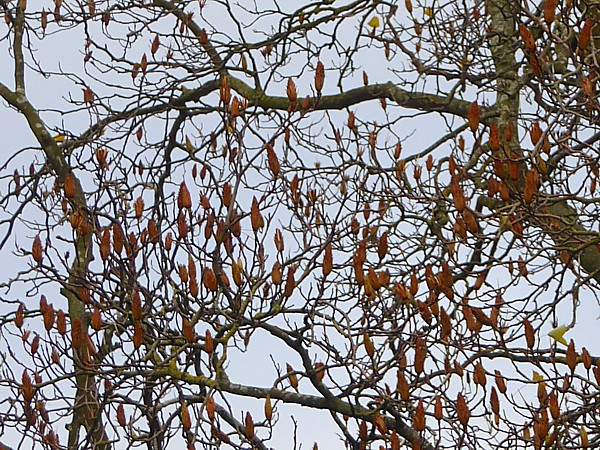