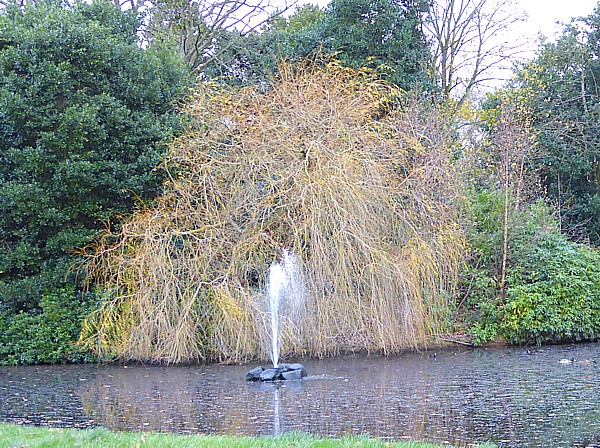 The Mute Swan family we saw in the middle of last week wasn’t at the south end of the lake, but there was another individual, standing hesitantly on the grass bank, with a BTO ring but no Darvic ring. Where had that one come from? The usual congregation of birds had gathered for food hand-outs: Canada Geese, Black-headed Gulls, Herring Gulls, a few Common Gulls further out, Mallards, Coots and Moorhens. The male Coots are starting to get aggressive and chasing each other around. A Pied Wagtail flitted around on the far bank, and we noticed two Little Grebes, where we’d seen only one last week. There were still Cormorants on the chain posts and about half a dozen Tufted Duck. I wonder why there always seem to be more males than females? 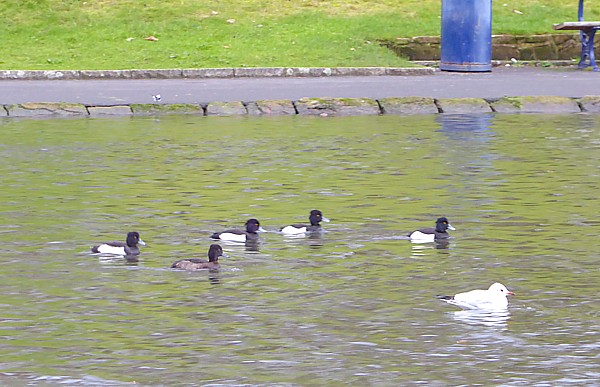 Near the grotto tunnel there were two Jays in a tree, and a Ring-necked Parakeet flew over the lake. Up on the higher bank we found this tree with amazing deeply ridged bark. I think it has to be Tree of the Day, although I have no idea what it was. Simply going by book descriptions I guess Black Poplar, Common Walnut or Locust but we need to see it in leaf at some other time of year. 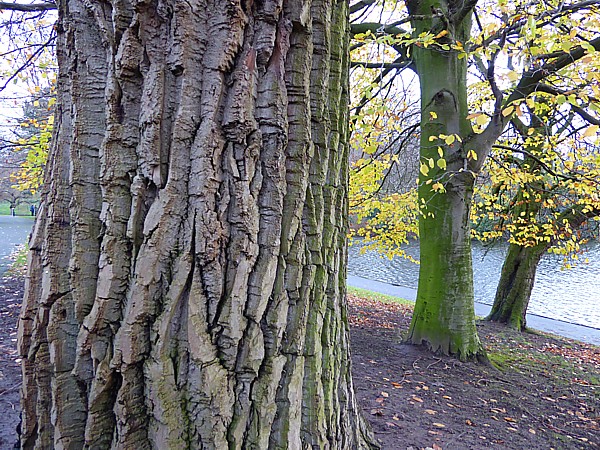 The family of eight Mute Swans were by the stepping stones on the middle lake, clustering around some children who were stooping to feed them. There are only seven birds on this photo, but the father of the family (the cob) was a bit further out, keeping an eye cocked for any danger. John was able to take all their Darvic ring numbers again, and the only one missing from last week was now readable as 4BVP. 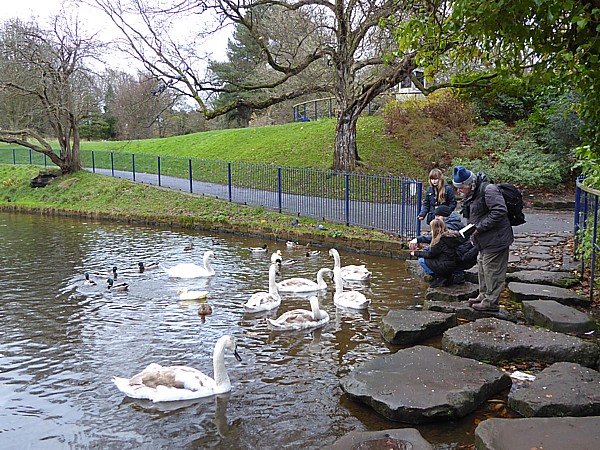 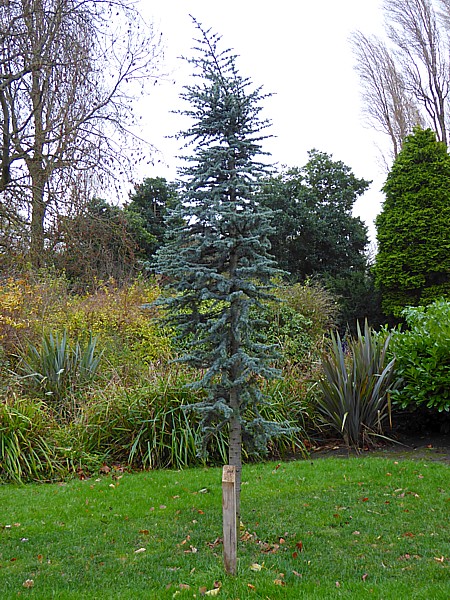 Nearby is an astonishing tree trunk. Olive remembers having this pointed out to her by a ranger, possibly Ritchie in his park heyday, and he said something about it being unusual that it dropped its leaves, and that it came from the time of the dinosaurs. I think it must be a Dawn Redwood Metasequoia glyptostroboides, but what an unusually figured trunk! 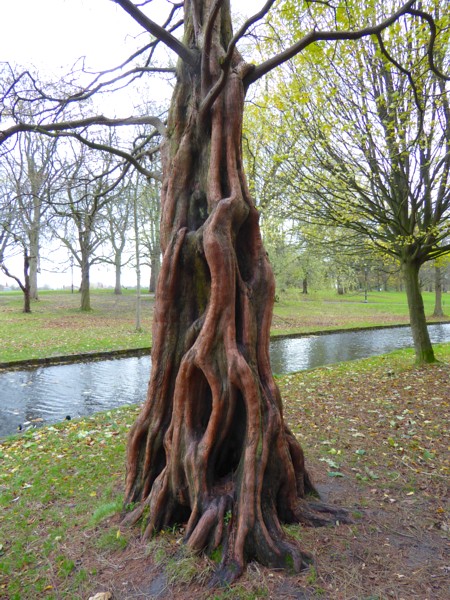 But back to Cedars. There are only four true Cedars (genus Cedrus) and the Cyprus Cedar is small and very rare, so it can be ignored. That leaves just three to sort out, and there is a handy mnemonic about their branches. A = Atlas Cedar (with two colour forms) = ascending;  L= Cedar of Lebanon = level; D = Deodar = drooping. There was a definite Deodar Cedrus deodara in the Dell, with drooping tips to its branches and leaves of different lengths. It was in deep shadow and hard to photograph well. So we’ve seen a mature Atlas Cedar in its green form, a young Blue Atlas Cedar and a Deodar in Sefton Park. Is there a Cedar of Lebanon? I used to live nearby and walked here often, but don’t remember ever seeing one. 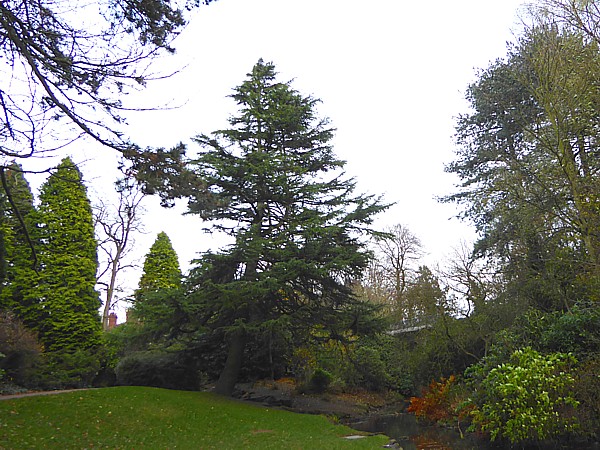 It was a very wild blustery day, with gales up to 60 mph reported. We later heard that some trees were down in Liverpool, disrupting trains and roads, but we weren’t affected. The wind roared in the trees overhead, and over it we could hear Crows cawing, Magpies cackling and the occasional squawks of Ring-necked Parakeets as they flew between the sheltering Scots Pines. In open areas we were sometimes blown to a standstill. There were twigs and bigger broken branches scattered along the paths, some up to two inches across, but mostly already dead wood. In the Dell a large branch had broken off some kind of Willow. 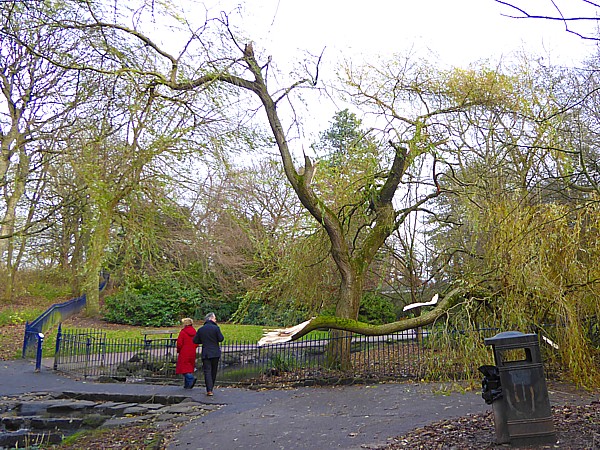 On the way back around the lake we saw the young Heron from last week, sheltering under the bank of the island. 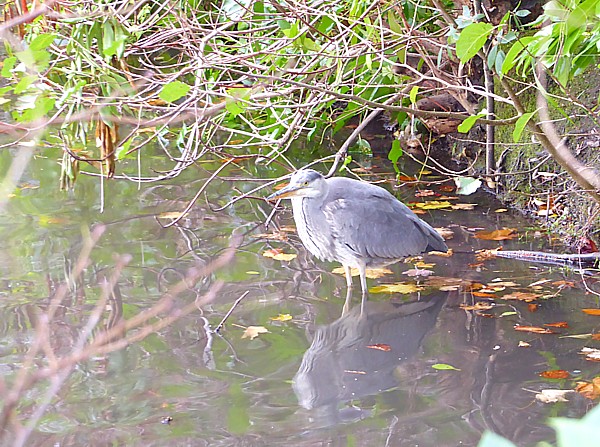