It was a bright and sunny day, so we headed off to Birkenhead Park. 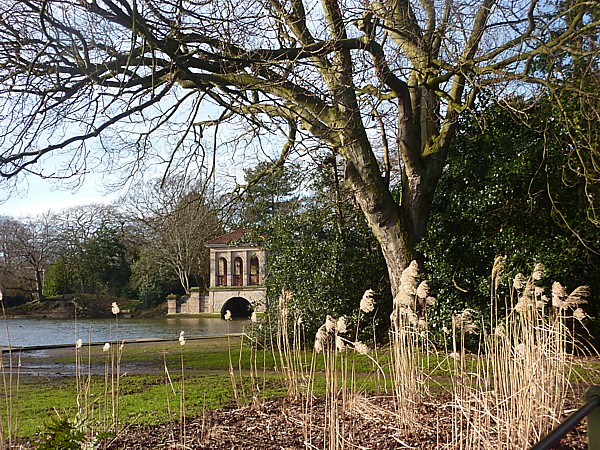 There were the usual park birds on and around the lake – Mallards, Coots, a Moorhen, Canada Geese, Wood Pigeons, Black-headed Gulls and a single female Tufted Duck. There were loads of Grey Squirrels, sometimes five at a time, all mooching for hand-outs. They came to within a few feet of us but are then shy and hesitant. 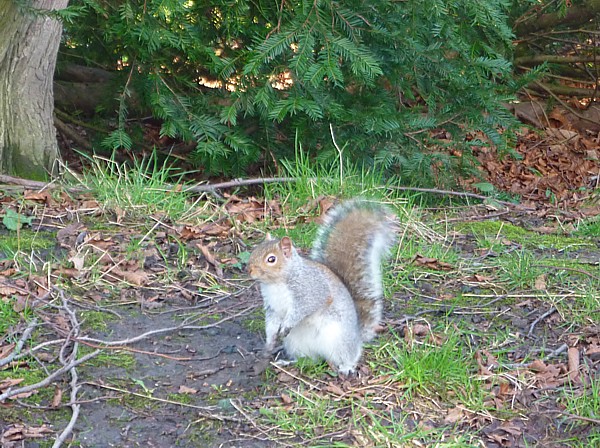 Someone had hung up a disused Christmas wreath with green and red nut bags and sprays of millet fastened to it. The nuts were all gone, but not even the squirrels eat millet in Birkenhead. 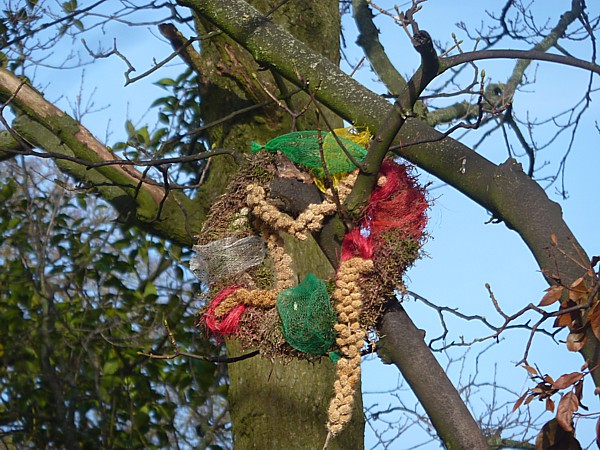 At the west end of the Swiss Bridge there are two handsome evergreen trees. The one on the right is a Yew, but the one on the left (lake) side is some sort of Cypress. I think it’s Monterey Cypress Cupressus macrocarpa. There were some dead branches lying around with a cluster of old cones, each about an inch (2.5cm) across. 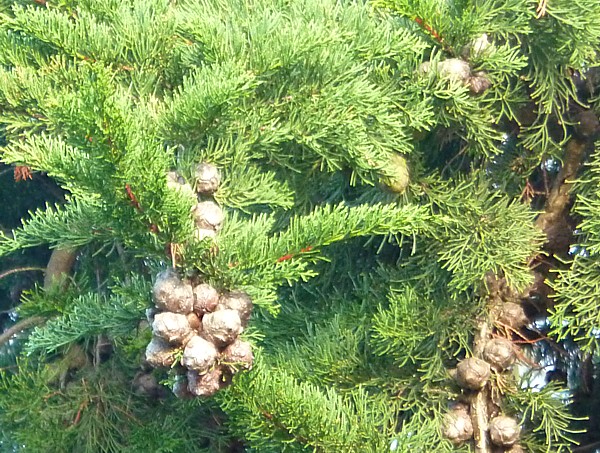 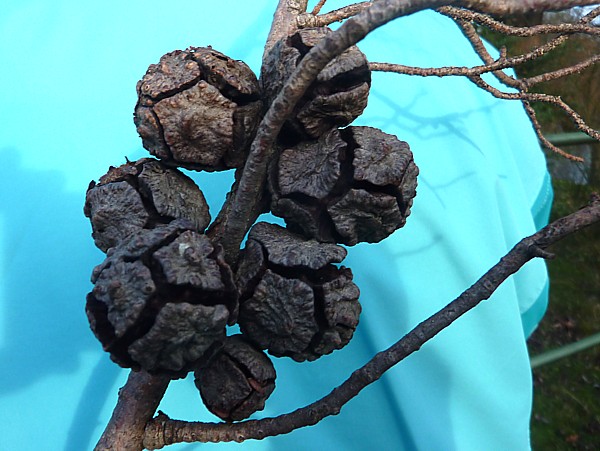 In a shaded corner under the wooden bridge to the east of the Swiss Bridge we always see a group of very odd ducks. They hang around here and seem to keep to themselves. In November 2011 there were five slim black ones with a white domestic-looking one, and a Ranger said he thought the black ones had some Indian Runner in them. In March 2013 there were just two of the black ones left, with the same slim, elongated look, yellowish beaks and dark green heads. This time we saw the same two black ones, but they were in company with two strange grey ones. 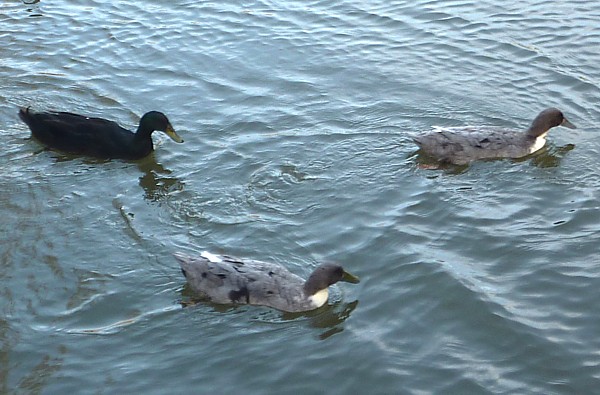 As we were looking at the odd-bods, three other atypical ducks emerged from under the bridge. They were iridescent green all over, Mallard shaped (fatter than the black ones), but with fan tails and light tips to their beaks. 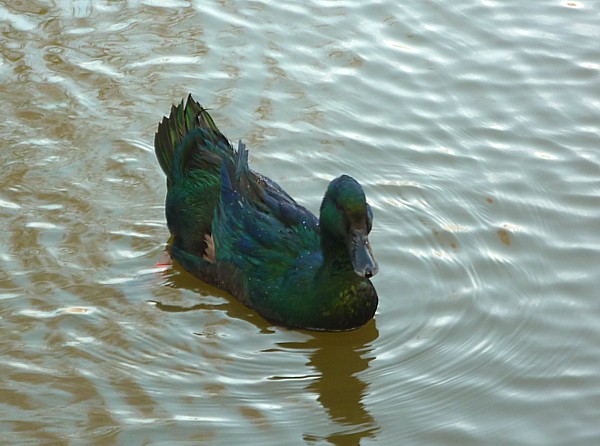 As they swam around we could see that all three of the dark green ones were ringed, as was one of the greys, but we couldn’t tell if the other one was. The two black ones were definitely not ringed. They were small orange rings, too small to read. Anyone know anything about these ringed hybrid ducks?

We are still keenly looking for signs of spring. We examined the early male flowers of Yew, which were still quite undeveloped. A shrub was in flower, which excited us for a moment, but it was  Viburnum tinus, which flowers from October to June, so is perfectly in its season. Loads of bulbs were shooting up, but none were in flowers. Our best indication was later in the day, when we found an ornamental flowering cherry blooming in a garden. 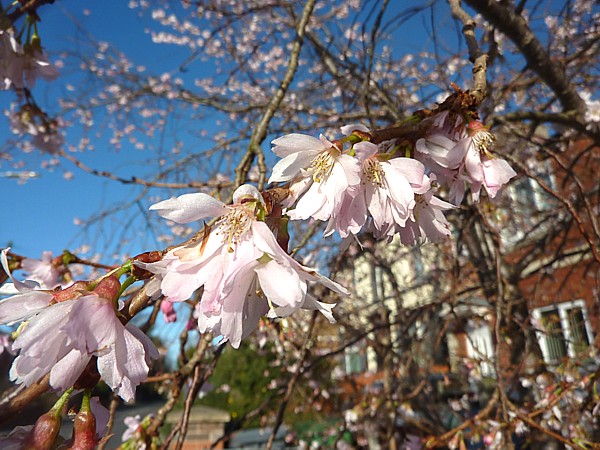 After lunch by the pavilion, we set off across the park for the Williamson Art Gallery, noting as we passed that the recent high winds have felled a tree, which made a big dent in the fence as it fell! 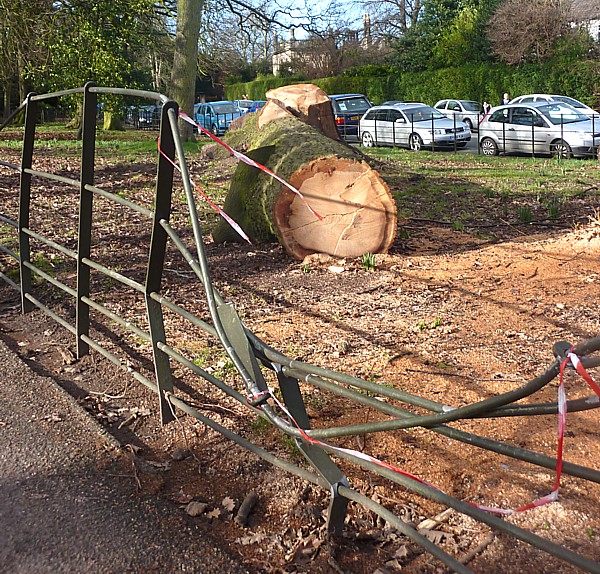 On Balls Road, just around the corner from the Gallery entrance, is a very old fluted pillar box. It is thought to date from about 1856, only four years after they were first introduced. It’s one of the oldest in Britain, older than the Victorian Penfold box near the park, which dates to 1870. 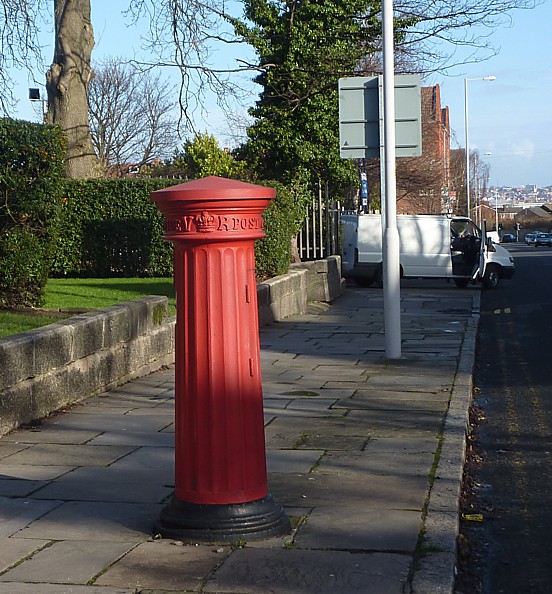 The very enthusiastic guide in the Williamson Art Gallery told us all about the ceramics on show, made by the local Della Robbia pottery. 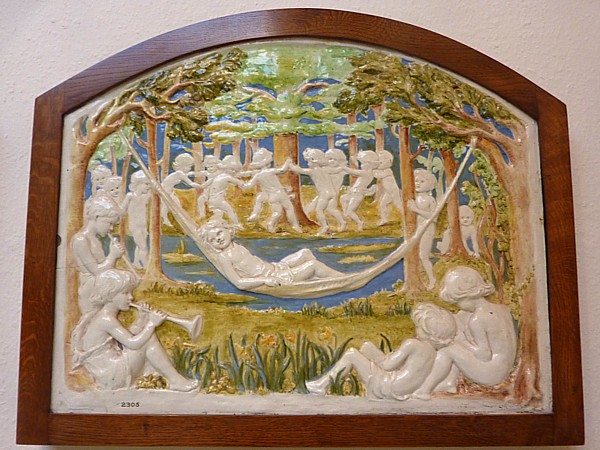 He was very keen to tell us all about the collection of magnificent ship models, including one of the Mauretania. Another model was of the steam-frigate HMS Birkenhead, which was wrecked off South Africa in 1852, when the troops aboard famously stood to attention as the women and children were saved in the (too few) lifeboats. They also had an interesting wall poster for the Birkenhead ferries. 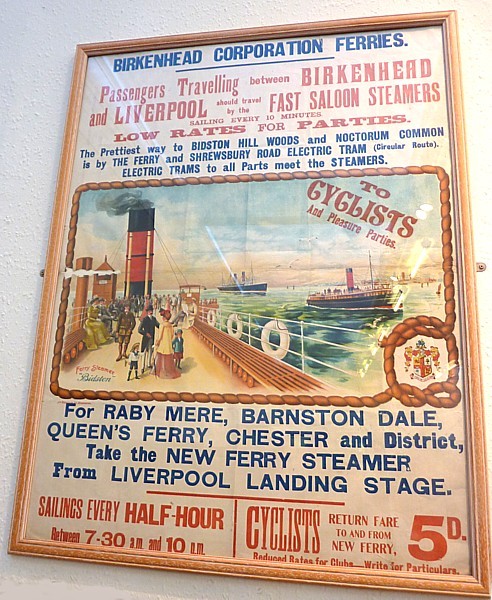 Public Transport details: Train at 10.16 from Lime Street station, arriving Birkenhead Park at 10.28. Returned by 423 bus at 2.45 from Borough Road, opposite Birkenhead Library