Another beautiful sunny day, with clear skies and long visibility, but with a sharp north wind. Last week’s brief heatwave has brought out all the Cherry blossom in thick bunches of pink, white and red, and the non-blossoming trees are flushing with the soft greens and pinks of spring. 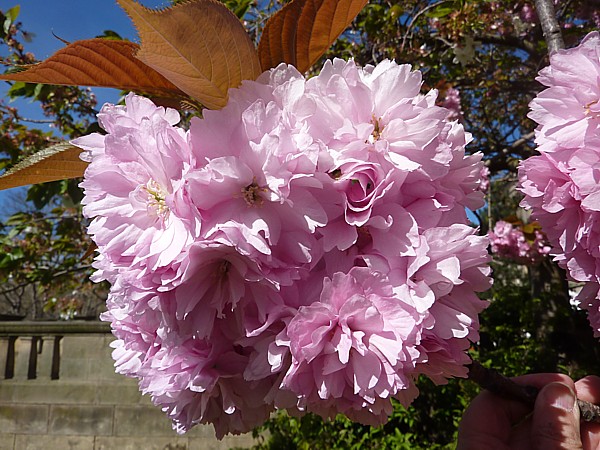 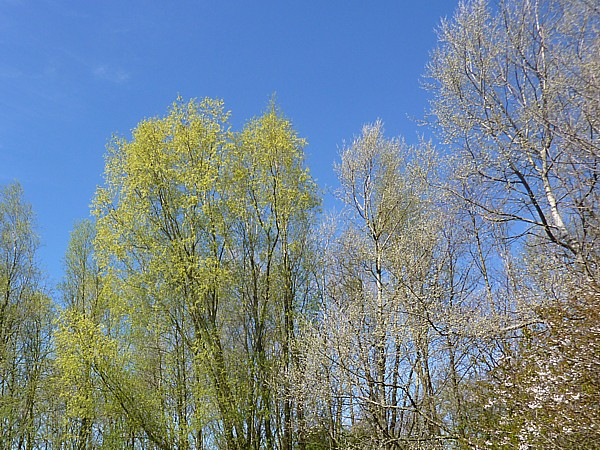 Because of the recently-changed train times we had a later start and arrived at Orrell Water Park just in time for lunch. We found a sunny sheltered spot at the north end, overlooking the first lake. There wasn’t much birdlife on the water though, just Mallards, Coots and Canada Geese, with a few passing Black-headed Gulls, Magpies and Wood Pigeons. This top lake is managed for coarse fishing so there were anglers camped out all around the edge. 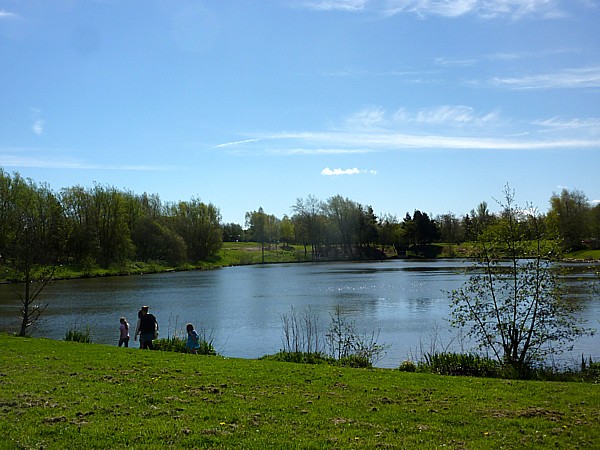 Around the east side of the lake we spotted a Robin, some Collared Doves, Blue Tits, a Mallard pair with seven tiny ducklings, perhaps hatched that morning, and some Coots on nests. Both Chaffinch and Chiffchaff were singing. These aren’t old woods, so there were very few flowers under the hedges, just Dandelions and Daisies. The lakes used to be reservoirs, and the area was landscaped in the early 1980s. Those trees were all bursting into leaf, and I think this red one is Sycamore. 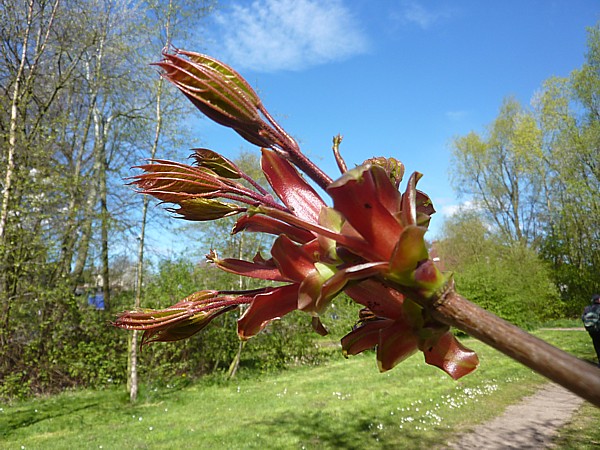 The southern end of the water park is managed for wildlife and called Greenslate Water Meadows. Their sign says “Greenslate’s development started in the early 1980s when the three ponds were dug and the area planted with native tree species. This reserve area now provides a mixture of open water, swamp, wet woodland, planted scrub and trees, bounded by well-established hedgerows. The reserve is particularly important for dragonflies and damselflies, with thirteen species having been recorded by the time the area was awarded Nature Reserve status in 2007. The reserve is also home to the nationally-protected Water Vole, four RSPB red-listed birds, four amphibian species and nineteen species of butterfly.”  We didn’t see any of the dragonflies, mammals or amphibians, and the only butterfly we noticed was a Small White. However, the swampy ground was rich in clumps of Marsh Marigold. 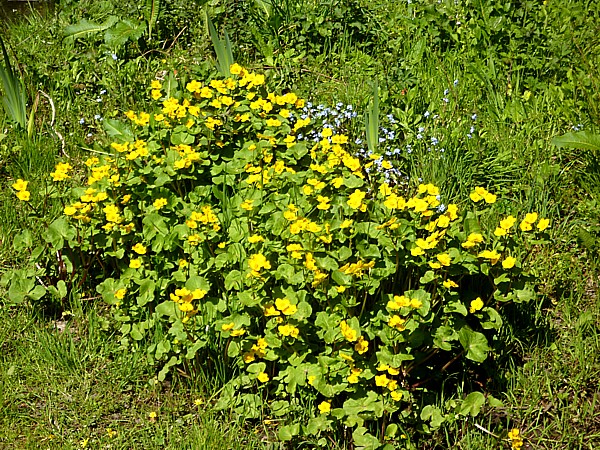 There were more wildflowers here, too, including Red Campion, Forget-me-Knot and Yellow Archangel under the trees. A single “wheep” call, which we hoped was a Nuthatch, turned out to be a Chaffinch! 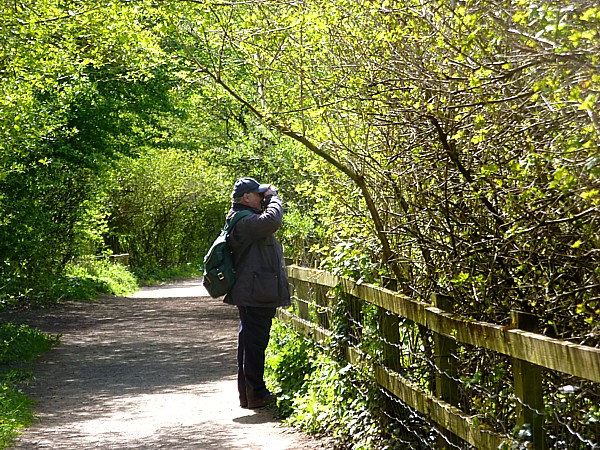 Near the junction of the southern loop is an area of bird feeders, where we saw Long-tailed Tits, Collared Doves, Blackbird, a Dunnock, Coal Tit, Blue Tits, a Wren, and one of the reserve’s specialties, a male Yellowhammer foraging on the ground. 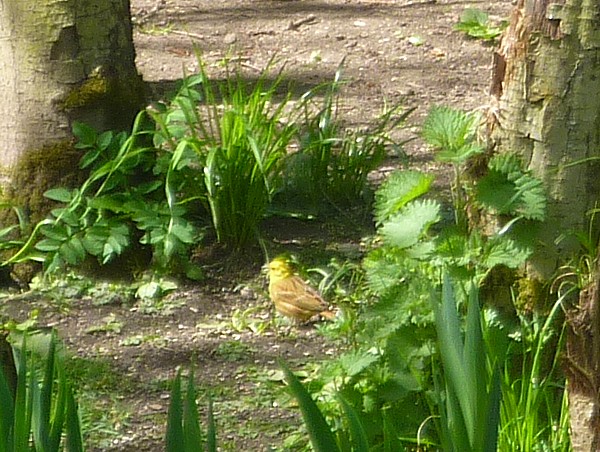 Around the southern end there was a pair of Blackcaps in the trees overhanging the path and we heard a Greenfinch calling. The Hawthorn isn’t flowering yet, it isn’t May after all, although there was some blossom at Marshside yesterday in a sheltered spot near Nell’s Hide. At Orrell there were only buds, but plenty of them. 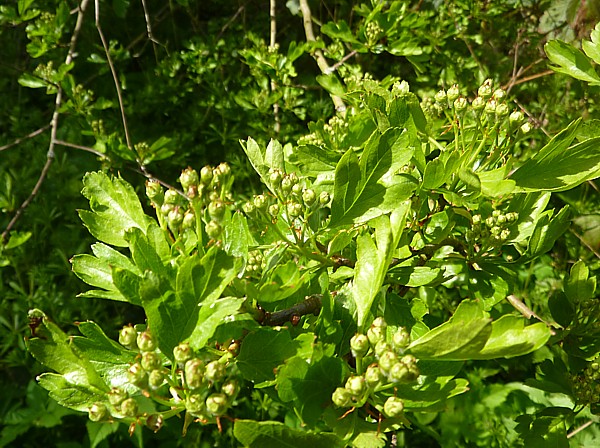 When we returned to the bird feeding area we were delighted to see a male Bullfinch on a feeder, at the same time as a Greenfinch. The male Yellowhammer had been joined on the ground by a female. There was a Great Spotted Woodpecker in the overhanging trees, which later hid behind the tree trunks, but it was very shy and didn’t come to feed. 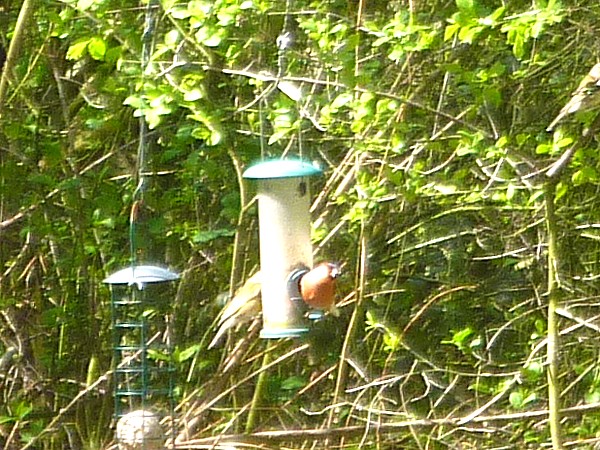 Although this is called a Water Park, from a naturalists’ point of view the water birds are rubbish but the woodland birds are great!

Public transport details: We met at the later time of 10.30, because the hourly train to St Helens now leaves at 47 mins past the hour. We got the 10.47 Blackpool train from Liverpool Lime Street, arriving St Helens Central at 11.13. Then the 352 Wigan bus from St Helens bus station (stand 6) at 11.35, passing Carr Mill Dam and Billinge, arriving Orrell Water Park at 11.57. There is no marked bus stop on the way back, so stand opposite the southbound bus stop and the return bus will stop for you. It was the 352 bus at 2.39, arriving St Helens 2.59. If you dash you might catch the 3.04 train from St Helens Central, arriving Liverpool Lime Street 3.32. If you miss it, rather than waiting an hour, you could get the number 10 bus back to Liverpool. (You could also get to Orrell Water Park by an hourly train from Kirby to Billinge station, which is only five minutes walk away, but it’s outside the Merseytravel area, so payment is required!)