It was colder and chillier today than the warm sunny days we’ve been having. I could have done with my scarf and woolly hat! It stayed overcast for most of the day, with a few rare glimpses of the sun. 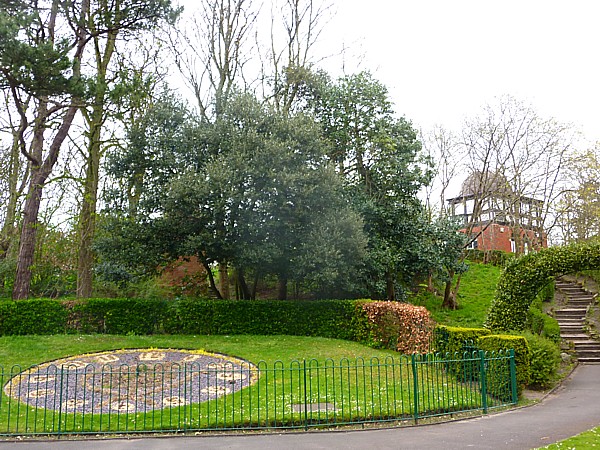 There were lots of flowering shrubs by the Park gates: Quince, Flame of the Forest, Hellebore, Euphorbia. The banks were full of Daffs and Hyacinths going over, Grape Hyacinths at their peak and Bluebells just coming out, including some patches with blue, pink and white flowers close to each other. Wildflowers included Dandelions, Green Alkanet, and this one with the leaf all around the stem (called “perfoliate”). It’s Spring Beauty. 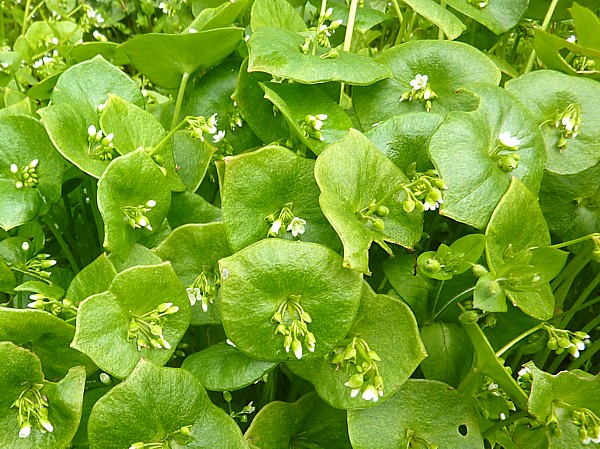 There were loads of Mallards on the lake, but no ducklings. John saw 60+ at a park in Ormskirk yesterday. A Mute Swan was on her nest on an island, as were several Coots, whose nests were on floating wooden platforms tethered to the island. Moorhens and Carrion Crows mooched about, and there were Herring Gulls, some Black-headed Gulls and one Lesser Black-backed Gull. One young HG on the water was fascinated by an orange ball with holes in it. It kept picking it up then dropping it back into the water. Did it think it was food? It looked like it was playing. 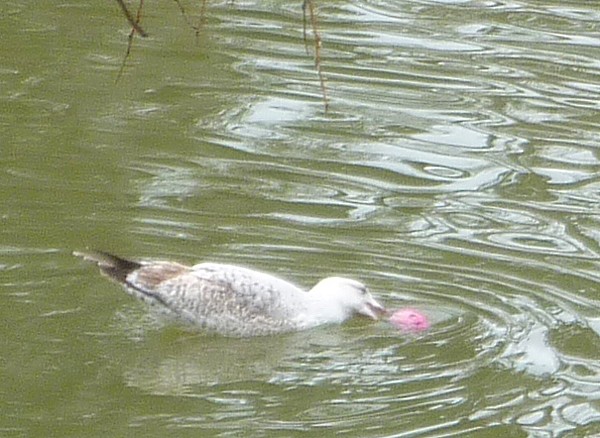 One pair of Mallards was head-bobbing. The drake had normal plumage, but the other was a dark one with a white chest, that we’d all have guessed was a male, but it was definitely a female. The drake responded to the head-bobbing invitation by grabbing the female’s neck, pushing her under water and mating. Then another male barged in, and then another. We always fear the female will drown when this happens, but she emerged from under the scrum and flew off. Later we spotted her keeping company with possibly the same Drake. 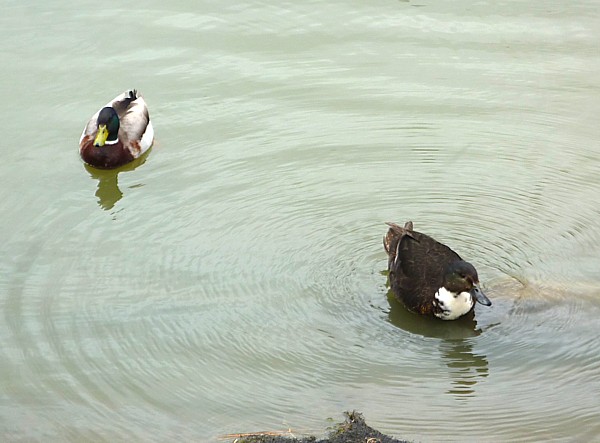 As we sat down for lunch and opened our bags, the Mallards and gulls perked up and watched us closely. 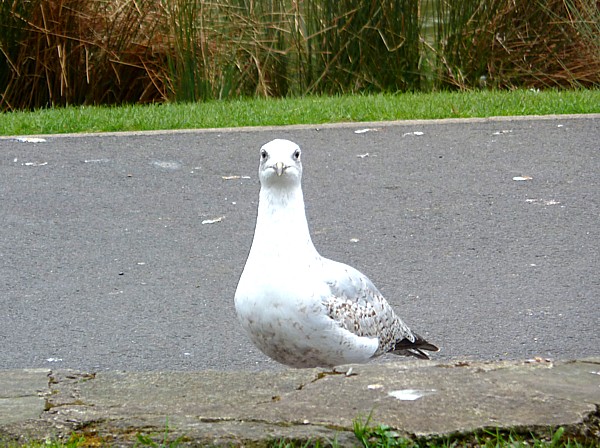 Both Chaffinch and a Chiffchaff were singing, a Wren flew across the path and a Dunnock picked about on the grass. Other birds today were Magpie, Wood Pigeon, Great Tit and a female Blackbird with food in her beak, who scolded us from the shrubbery while we were examining some low flowers of Magnolia.

On the bank beside the path we looked at some large patches of roundish leaves springing from the ground, looking rather like Coltsfoot or Butterbur, but they weren’t either. There were no flowers at all, just the leaves. Any ideas? (Added later – second addition. Not Butterbur, which has much bigger leaves.  It’s Winter Heliotrope. ) 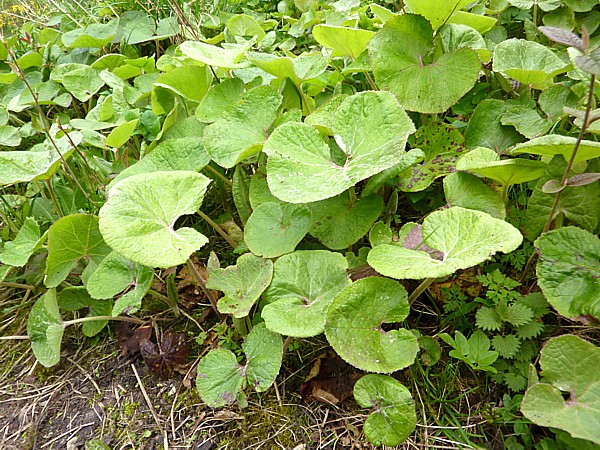 On the west side of the lake the banks were full of wildflowers. Red Campion, Greater Periwinkle, Forget-me-Not, Common Fumitory, Herb Robert. 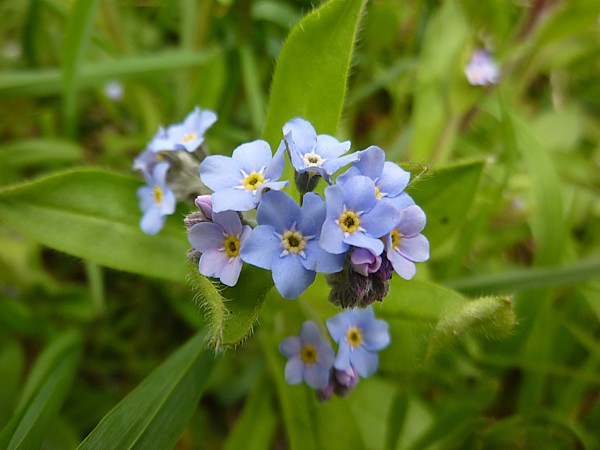 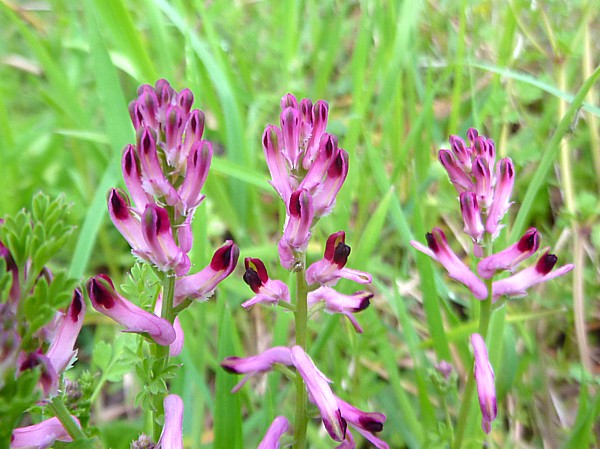 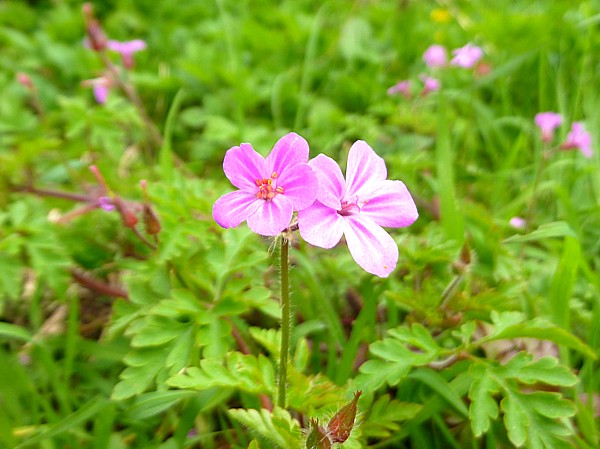 In the sunken garden below the Fernly Observatory there is a floral clock and a stone with a verse of an apposite poem by Andrew Marvell. See my report on our previous visit to Hesketh Park on 19th Feb 2012.  Then we spotted a Hedgehog just by the clock, poking in the grass for worms and insects.  It’s the first one I’ve seen for years. It was quite small, possibly just a youngster, and it was a bit sluggish because it wasn’t that warm. Aren’t they supposed to be nocturnal? It didn’t seem to be bothered by people talking and passing by. Eventually it sloped off to the hedge and disappeared. 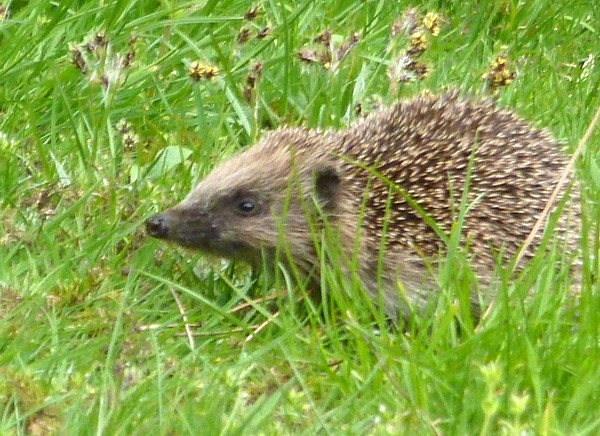 We had a very good day for trees. The Sycamore and the Horse Chestnut were leafing. One tree had a few bunches of acid-yellow flowers, which we thought were Field Maple, but they are usually more profuse. Near the Observatory was a fantastically tortuous tree with weeping branches and a graft line about 4 foot up the trunk. There was a wooden signpost nearby but the name label was missing, Then we saw another, then a third, and the last one DID have its nameplate. They were Weeping Pagoda trees Sophora japonica “Pendula”. Mitchell reckons they are quite a rarity. The ordinary Pagoda trees are classed as “uncommon”, found only in the south of England and East Anglia. The “Pendula” variety is said to be only occasionally found in south England. He describes them as “a mass of contorted branches grafted onto a stem of the type”. 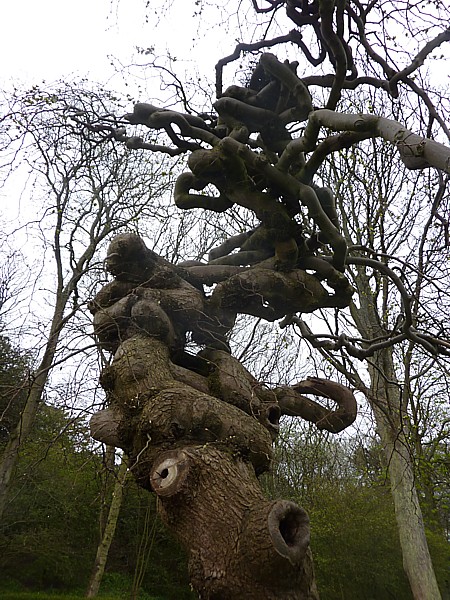 There were some other good trees (with labels, happily) in the Sensory Garden for the blind on the west side of the park. One was a Persian Ironwood with interesting patchy bark and another was a Katsura tree, with the leaves well out. They look like the leaves of the Judas Tree, but are positioned opposite, whereas the Judas Tree’s are alternate. 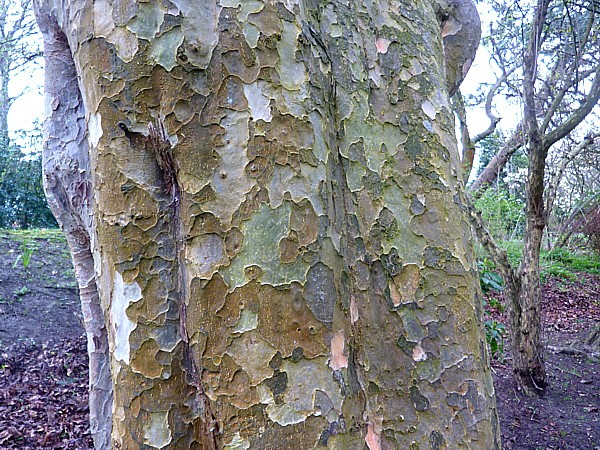 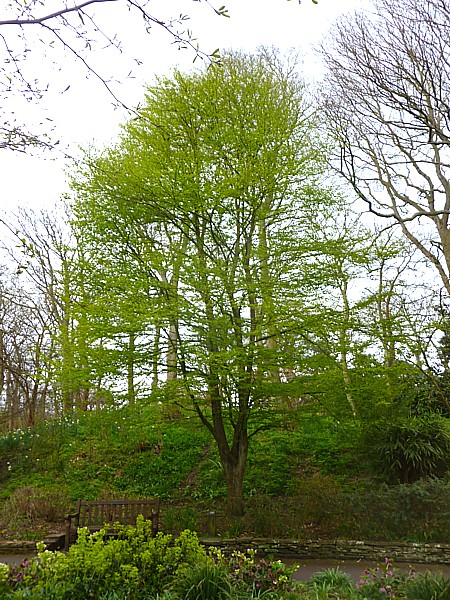 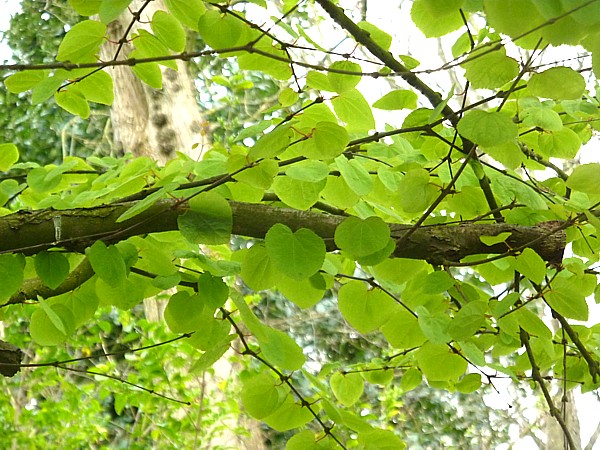 The Sensory Garden had unusual maroon-coloured Hyacinths, Lavender and Rosemary by the path edges for the blind to feel and smell and this plant with huge whitish leaves. I think it is Giant Artichoke, which will be spectacular when it flowers. 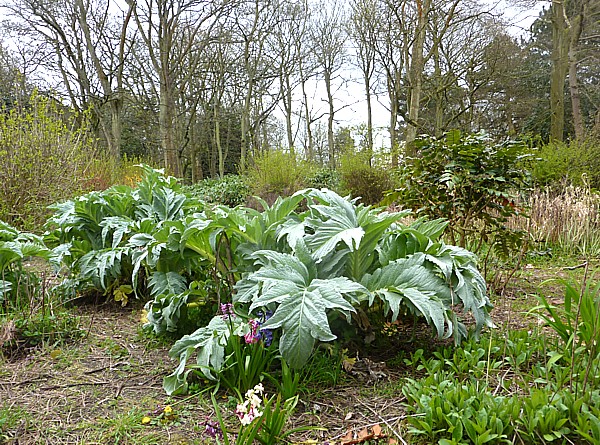 Our last interesting tree was just outside the Sensory Garden. There was a fine tall Wellingtonia tree (on the left of the picture below) but just in front of it, leaning at about 45 degrees, was something with amazing pink tassels. What was THAT? The leaves were just coming out, and below them were loads of pink dangly things. Catkins? The leaves look like some kind of Maple, but the long catkins suggest something from the Poplar family. Any suggestions welcome! 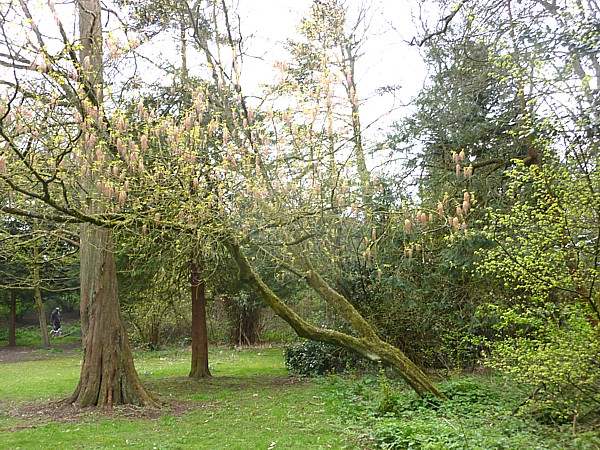 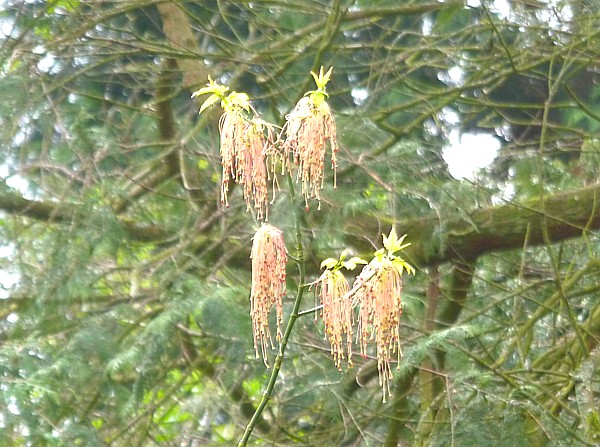 (This tree was finally identified in late 2016 from Collins British Tree Guide. It’s a Box Elder, which isn’t an Elder at all, but a member of the Maple family, Acer negundo. “Untidy shape, leaning stems, flowers in showy hanging plumes before the leaves.” This must be the “occasional” variant violaceum, “males with spectacular salmon pink flowers”.)