It rained all last night, and was still raining when I set out, but the forecast said it would soon clear up, and it did.  When we arrived at Higher Bebington there were patches of blue sky and the sun was breaking out. We climbed Village Road past the lovely Victoria Hall and the George Hotel, admiring the view behind us to the Liverpool cathedrals. Then we crossed Mount Road into Rest Hill Road which runs between the two halves of the woods. 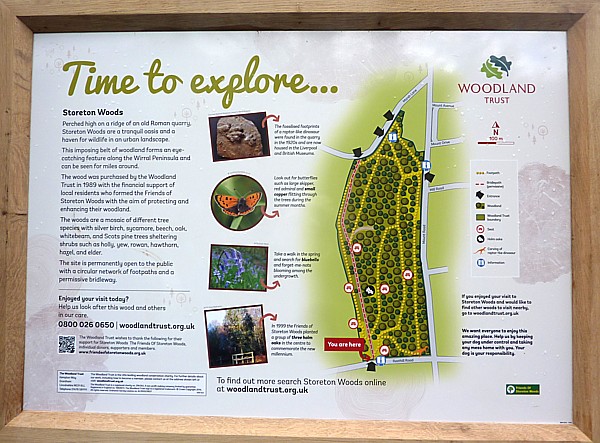 Along the west side of the southern wood, with open land to our right,  a Chiffchaff was calling, and we saw a Robin, a Blue Tit and two male Pheasants in a field. The air was alive with St Mark’s Flies, with their dangly legs, who are named for St Mark’s Day on 25th April, but are usually seen in early May. Wayside flowers included Garlic Mustard and Red Dead-nettle. We could see across to Moel Fammau, and in the middle distance was  the M53 and the row of Lombardy Poplars along the Lever Causeway. 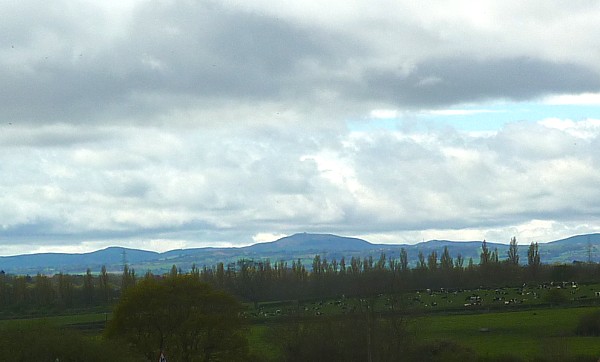 We returned through the woodland, passing the TV transmitter mast. A Great Tit was calling and John saw a Willow Warbler. The Celandine was still in flower, and all over one large bank was a mass of those plants with the big round leaves springing straight from the ground that we noted in Hesketh Park two weeks ago. Still no idea what they were, but they are clearly propagating vegetatively below the ground. (Added later – second correction, not Butterbur, it was Winter Heliotrope. Thanks Chris B.) We noticed that there were no Bluebells or Wood Anemones in this part of the wood, so it’s not old woodland. It used to be a stone quarry until it was filled in during the 1920s with the spoil from the building of the first Mersey Tunnel. 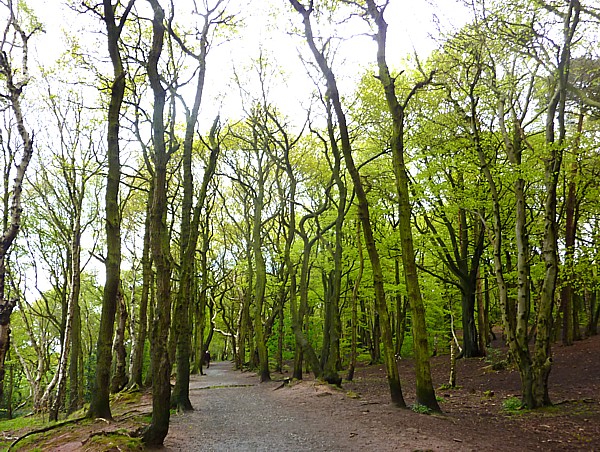 After we crossed into the northern section we began to take note of the leafing trees. There was some confusion over whether some simple green leaves were Beech or Hornbeam, but later we found a Hornbeam, so the earlier ones were Beech. The Beech leaves (which are much commoner) have mostly smooth margins while the Hornbeam leaves are a bit darker, and have toothed edges. 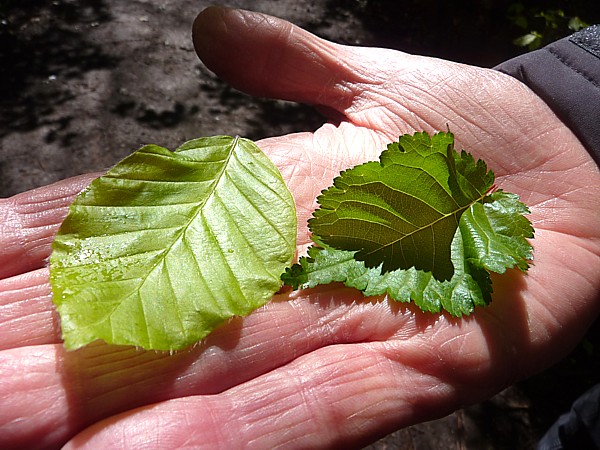 The Cow Parsley was just coming out, and there were a few Bluebells in this northern section. There was more birdlife, too, despite it being popular with people walking their dogs. We saw a Song Thrush on the path, a Mistle Thrush, a Blackbird, a Jay, a Treecreeper and a Nuthatch. There was a Woodpecker drumming in the distance, and although John responded, hitting a stick on a fallen tree, the bird didn’t come closer and we didn’t see it. There was a Grey squirrel, too. We saw the first Oak in leaf, whose new leaves had red and gold tints like autumn. Was it a Sessile Oak or an or English Oak? No idea, although Sessile is said to be more common in the north of England. 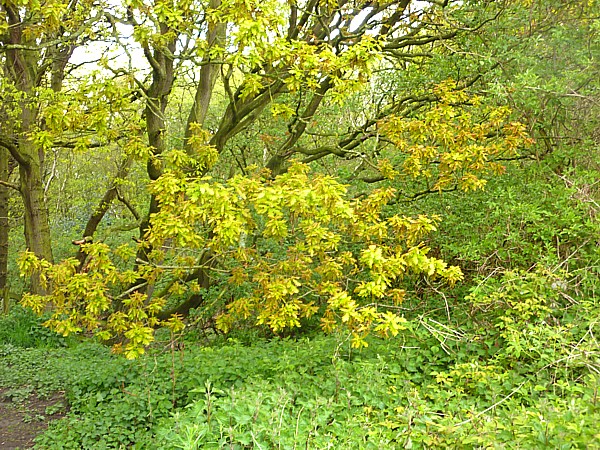 There used to be a small railway or tramway here. A small plaque in the ground marks the site, and there are two preserved rails. The sign says Storeton Quarry Tramway. Stone was quarried at this site from Roman times until early this century. Between 1838 and 1905 the stone was transported to Bromborough Pool via the Storeton Tramway. In 1840 its standard gauge track was connected to the Chester to Birkenhead Railway. Near this spot the tramway curved towards “The Great Cutting” of the North Quarry. This project, which displays the original Fish-bellied rail, has been carried out by The Friends of Storeton Woods with the support of The Woodland Trust. November 1995. 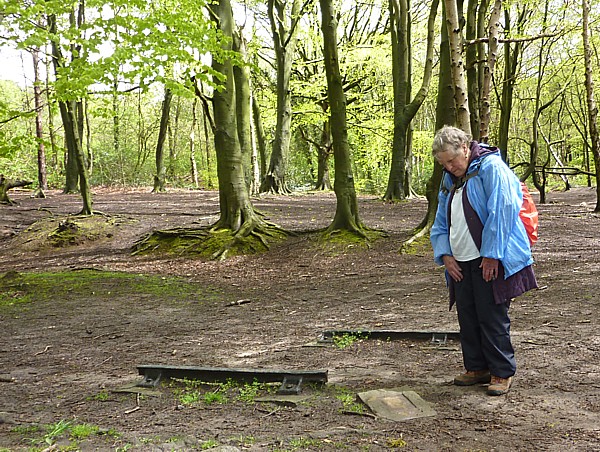 Tucked away in the south east corner of the northern wood there is a carving of a small Dinosaur. It is a Chirotherium, a Triassic dinosaur whose fossil tracks were found in the quarry in the 19th century. It was 2.5m (8 feet) long and 1.5m (5 feet) tall. There are fossil footprints  of Chirotherium in the Clore Natural History unit of Liverpool World Museum,  in the Williamson Art Gallery in Birkenhead, and they sometimes emerge from the mud on Crosby and Formby shore. 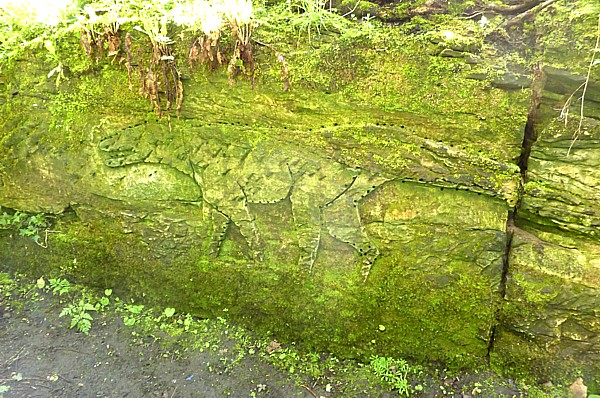 Nearby, in dappled sunlight, we spotted a Speckled Wood butterfly, and also this plant. It reminded me of Lily-of the Valley or Solomon’s Seal, with all the flowers on one side of a curving stem. Suggestions as to what it is would be welcome. 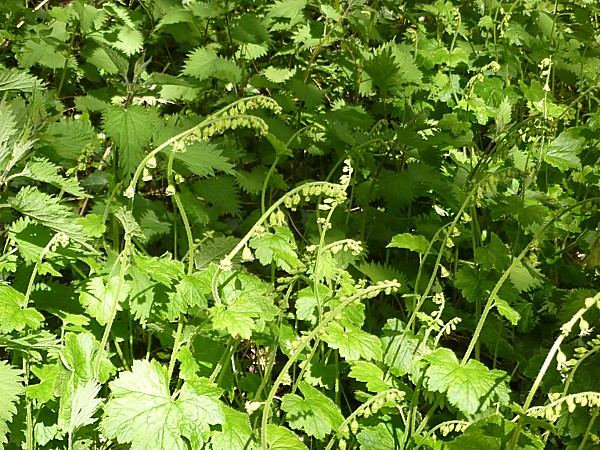 As we returned down the hill we noticed a Buzzard being harassed by a Magpie. Two cottages at the bottom of Village Road were very pretty, one called Forge Cottage and the other with shutters, Wisteria and a sundial over the door. 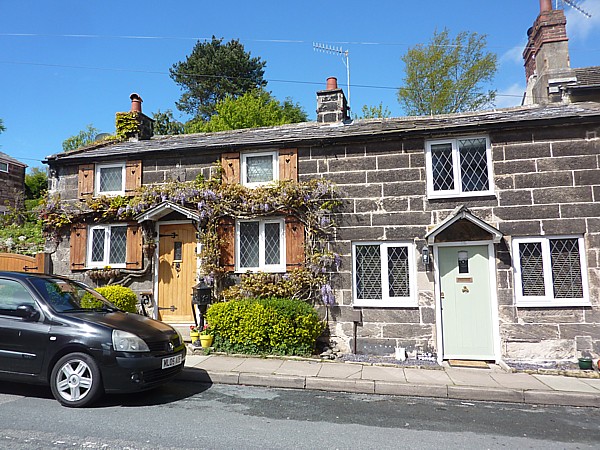 As we waited for the bus great drifts of pink cherry blossom petals were being blown along the road.

Extra note. The RSPB went to Gorse Hill yesterday and they asked for some publicity for their Sunday openings on the first Sunday of the month at 10.30. They run free guided walks 1.30 to 3.00.