Posted on February 11, 2013 by Sabena Blackbird 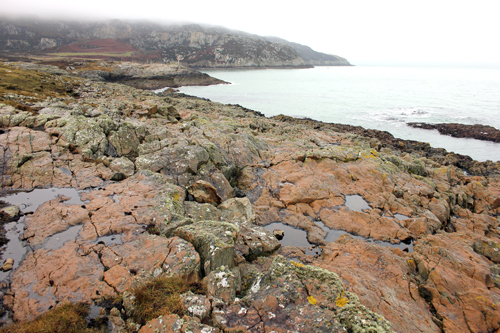 The first MNA Coach trip of 2013 saw us returning to a familiar venue at Holyhead Harbour and the nearby Breakwater CP. It was a misty and drizzly day but we soon got down to some birding with Starlings and a Pied Wagtail on the grassed area beside the shore and a Song Thrush perched low down in a bush. A dark coloured Grebe diving amongst the boats in the harbour had us puzzling its identity. Elsewhere in the harbour we found a Cormorant, a few Shag, Little Grebe, a Black Guillemot already in summer plumage, a male Red-breasted Merganser with his entourage of four females who were observed performing synchronized diving  diving in unison then popping back up together.Chris Derri did some sea-watching and was rewarded with sightings of a few distant Common Scoter, a Red-throated Diver, Common Guillemot and Razorbill.

I had a good root around the seaweed on the harbour shore. There were three different Wrack species and a few long strands of Sea Belt Kelp Laminaria saccharina.  There was Spiral Wrack Fucus spiralis, Knotted Wrack Ascophyllum nodosum which has long strap like fronds with large egg-shaped air bladders at regular intervals. A number of fronds bore tufts of the small reddish-brown filamentous epiphytic algae Polysiphonia lanosa. 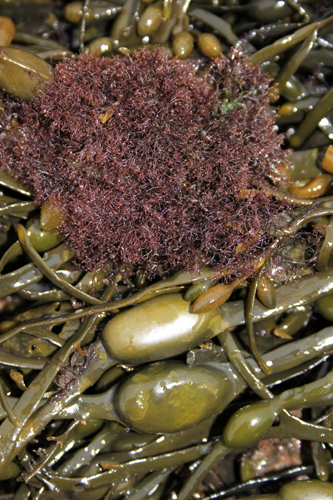 Fronds of Toothed Wrack Fucus serratus were covered in the Tubeworm Spirorbis spirorbis. These are often overlooked due to their small size. Their smooth, white spiral tubes, which coil to the left (sinistral) are only 3-4 mm diameter. 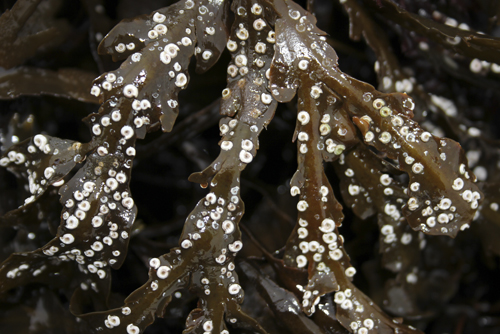 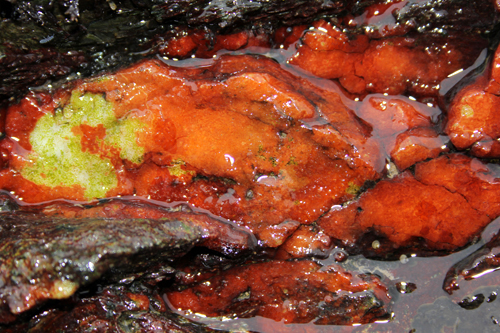 On the harbour wall we watched a few Rock Pipits flying up to catch flies  which were about despite the weather. On some rocks we watched an Oyk, a Ringed Plover, a sentinel Shag with tufy hairdo. Limestone blocks on the harbour wall gave an interesting diversion as they were packed with fossils including numerous brachiopods, solitary and colonial corals and a lone gastropod. 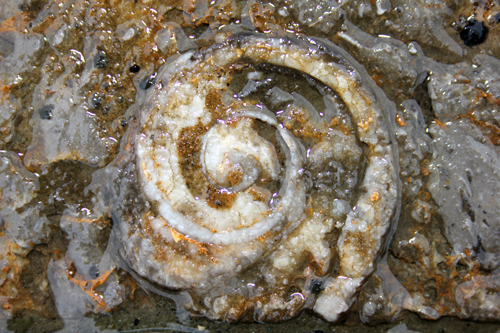 We walked past the dramatic cliffs which are composed of Holyhead quartzite, a massive white quartzose sand deposit with some relict sedimentary features but now fused by metamorphism into a crystalline rock. There was plenty of Sea Ivory Ramalina siliquosa growing on the stone walls, this distinctive Lichen has grey tufted strap-like projections attached to the rock. Agrey Heron took off from the shore and a Curlew flew overhead.A shrill cry of chee-ow quickly had binoculars scanning for the source – Red-billed Chough. This beautiful bird sometimes called the sea crow has glossy black plumage, a red bill and legs. A couple of Chough were located feeding on a grassed field along with Oyks and a Redshank.We stopped to admire the mosaics at the Breakwater CP visitor centre before walking back along the lane towards the harbour. 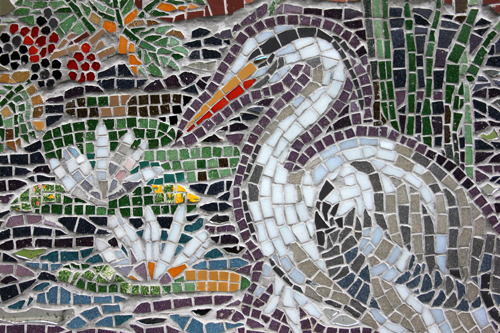 The lane edge had plenty of Winter Heliotrope Petasites fragrans which is one of the Aster family. This European herb has vanilla-scented white-pink flowers, hence the latin name fragrans. Its large green, leathery leaves were not dissimilar to those of Butterbur Petasites hybridus. 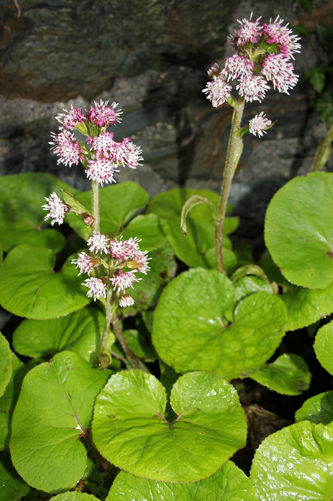 Our usual Brent Geese were missing when we arrived at Parc Arfordirol Penrhos CP, Beddmanarch Bay. The tide was out so we scanned the mudflats through the mist for any sign of life. Shelduck looked monochrome in the gloom, Curlews were probing in the goo with their long down-curved beaks, a Bar-tailed Godwit with upturned bill also probed and Grey Plover had a quick burst of energy darting around before standing motionless again. A few Red-breasted Mergansers were around along with a couple of Great-crested Grebes and a lone Slavonian Grebe. The small pond held Coot, Moorhen, Mallards and a few Black-headed Gulls.The feeders held Chaffinches, a Greenfinch, Blue Tit, Great Tit, a Robin trying to grab hold of the feeder with Dunnock and Blackbird more sensibly feeding below. Goldcrests calling away from the pine trees proved elusive. Snowdrops were peeking up through the muddy ground and a bright burst of colour was a couple of blobs of Yellow Brain Fungus Tremella mesenterica. 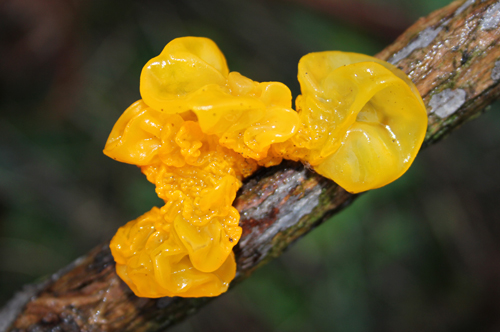