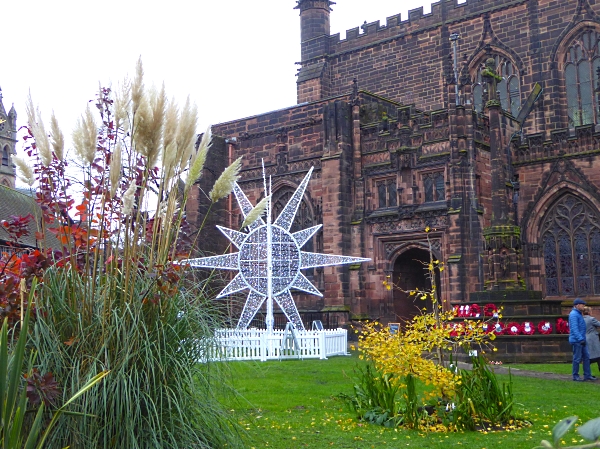 I wanted a Norway Spruce, and now they are everywhere as Christmas trees! There’s hardly a town square or greengrocer’s shop without several of them on display. What I really want, though, is one with its roots still in the ground. There’s a tall, narrow conifer in Grosvenor Park, Chester which might be one. Although there were no papery Spruce cones hanging below its branches to confirm it, and no woody fir or pine cones on the ground beneath to tell us it wasn’t a Spruce, I will count it (or the Christmas trees) as our last I-Spy tree of the year, taking us to 1280 points. 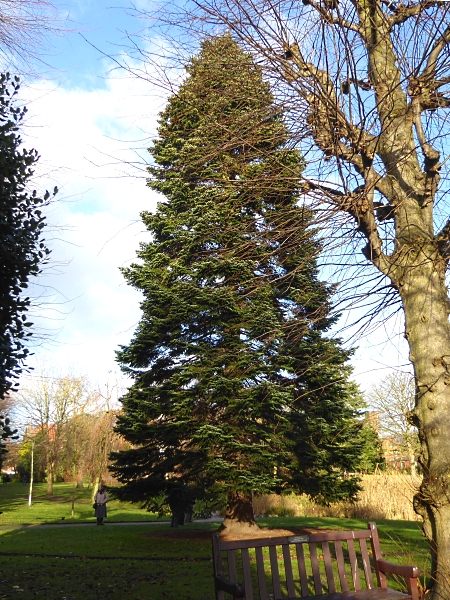 The little pond in the park had only Mallards, Moorhens, and some Black-headed Gulls. Fearless Grey Squirrels were underfoot everywhere, and someone had thrown down monkey nuts for them (peanuts still in their fawn papery shells). One was left, and some pigeons were squabbling over it. Finally a Wood Pigeon made off with the bulky prize, swallowing it whole, shell and all, down into its crop. A bit further on we saw a squirrel displaying some semi-natural behaviour, burying one of the monkey nuts after carefully looking about to see that none of its rivals was watching. 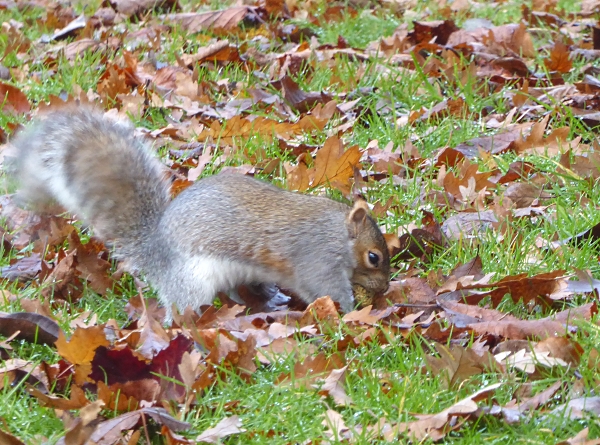 On one of the lawns there were two tiny little Ragwort plants in flower, only four or five inches tall. They are tough little plants to be flowering so late in the year. 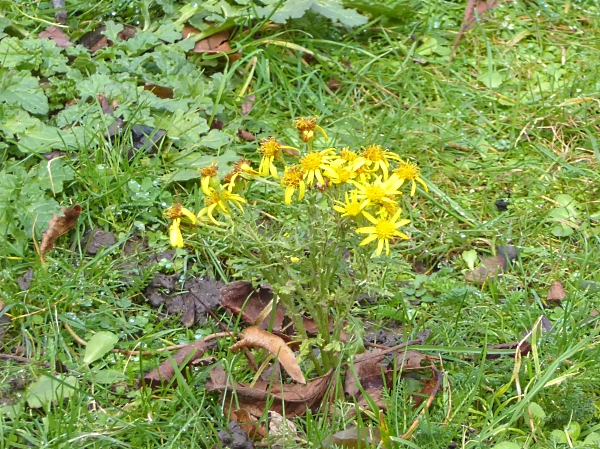 Near the rose garden is a Tulip Tree bearing lots of cones. We never see the flowers in such profusion. Do they flower just a few at a time, I wonder?  Some of the cones had Ladybirds on them, all appearing to be Harlequins. I think they instinctively climb at this time of year, looking for a crevice to overwinter in. 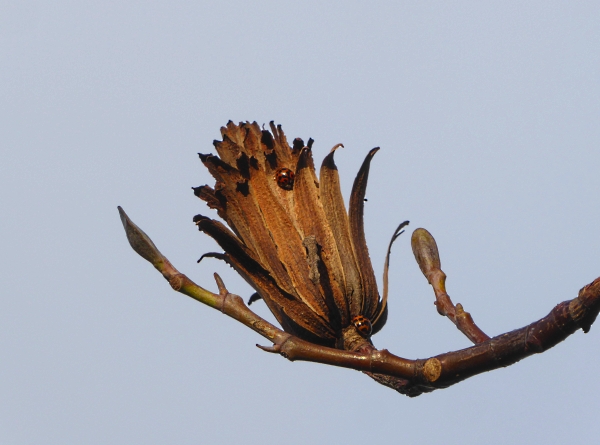 More Harlequin ladybirds were at the tops of the bollards along the riverside at the Groves. They couldn’t get any higher and were circling the tops, probably stranded but unable to choose to go down again. 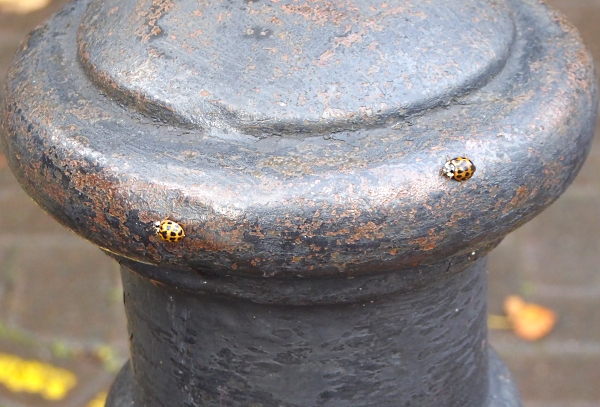 Garden-variety Campanulas were sprouting and flowering all over the old wall up Souter’s Lane. 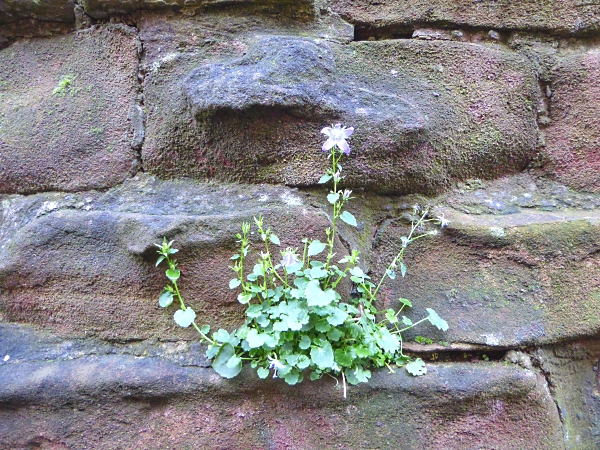 There is a very strange droopy tree on the lawn by the Cathedral. Our first reaction was to call it the famously pendulous Brewer’s Spruce, but the foliage was definitely cypressy.  I didn’t inspect it very closely, but after looking it up I suspect it might be the pendulous variety of Nootka Cypress Xanthocyparis nootkatensis ‘Pendula’, sometimes nicknamed the Afghan Hound Tree, and you can see why. I will have to look at it again in the summer, when it is said to have conspicuous bright navy cones, 2cm across. 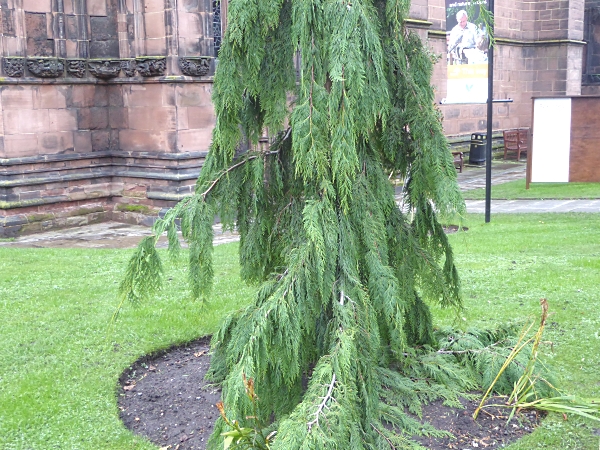 The Christmas market was busy, and then we headed back to the station through Abbey Square and the Kaleyards. Oddly, they have a large pigeon loft there, and a sign asking people not to feed pigeons anywhere else. I wonder if that has worked? I can’t remember seeing flocks of pigeons anywhere else in the city, so maybe it has. 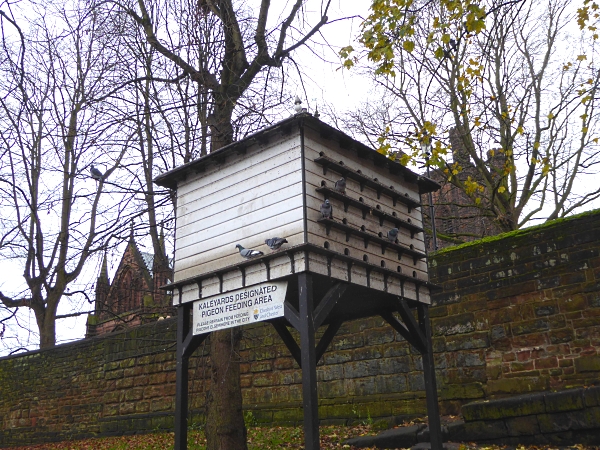