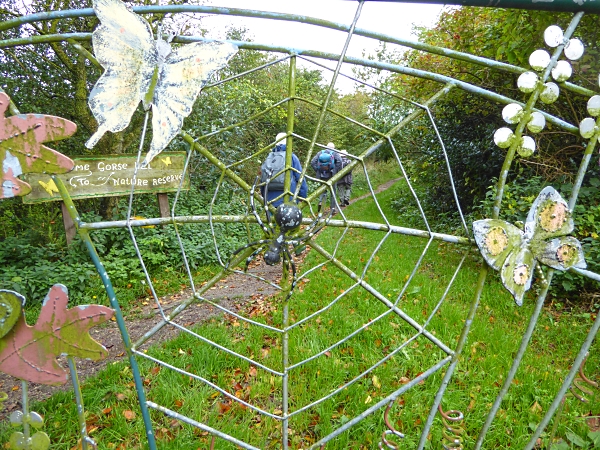 There was a “V” of about 50 Pink-footed Geese flying north over Aughton church, identified by their high-pitched contact calls. On the way up to the reservoir the field to the left of the path was ploughed, and several Black-headed Gulls were pecking about in it. On the other side, a crop of carrots had been harvested, but there were plenty left. 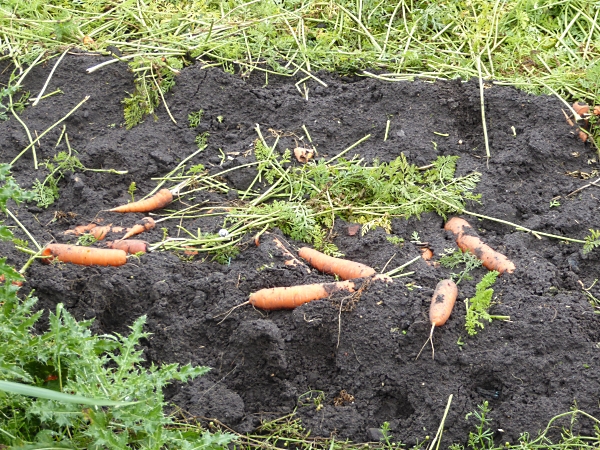 There was a Pied Wagtail on the reservoir roof, a Robin on a wire and the riding ponies were watching us closely from under a windswept tree. 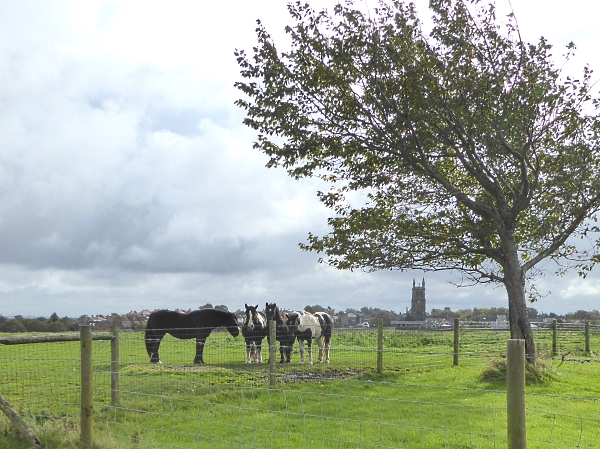 The second Sunday in October is always the Apple Festival at Gorse Hill, and we joined the orchard tour which was setting out just as we arrived. They have 105 trees of 30 varieties, planted 15 years ago on semi-dwarfing rootstocks. That has encouraged them to fruit early and they are easier to harvest, without needing ladders. The volunteers there are very proud to have the variety “Isaac Newton”, which they say is a cutting from the original tree in the Newton family garden at Woolsthorpe Manor near Grantham, and which is apparently still alive. The fruit of almost all the varieties at Gorse Hill ripened early this year, so most of the trees are now bare, with just some late trees still to harvest. 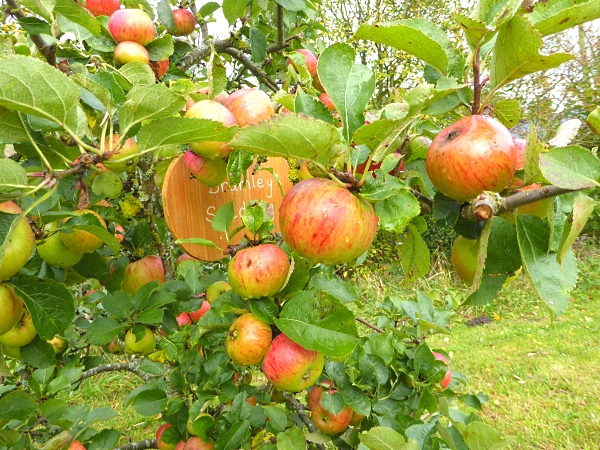 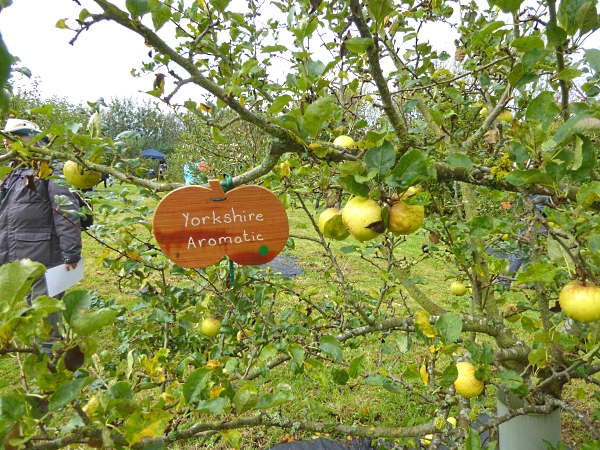 We lunched by Seldom’s Pond, watching Blue Tits and a Coal Tit on the bird feeders. There was a Brown Hawker dragonfly still flying over the reeds. Then we strolled through the lovely woodland paths. 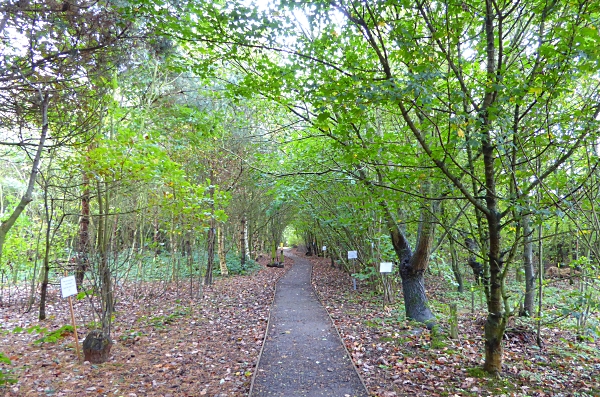 Many of the trees there are labelled, and one was a Spindle tree, which had no fruit, so we wouldn’t have known. We’ve seen them three weeks running now. The woods are full of bug hotels, newt shelters (they say they have all three species), wood carvings and small mammal piles, made from plastic tubes stuffed with hay, covered with carpet squares then pegged down and piled over with branches.

At the barn area they were selling apple juice (but no cider this year), local organic veg and their own apples. I got some runner beans, some Cavolo Nero kale, a wonky cucumber and two apples each of varieties “Katy” and “Sunset”, to add to the windfall “Yorkshire Aromatic” and “Egremont Russet” which I’d picked up earlier. 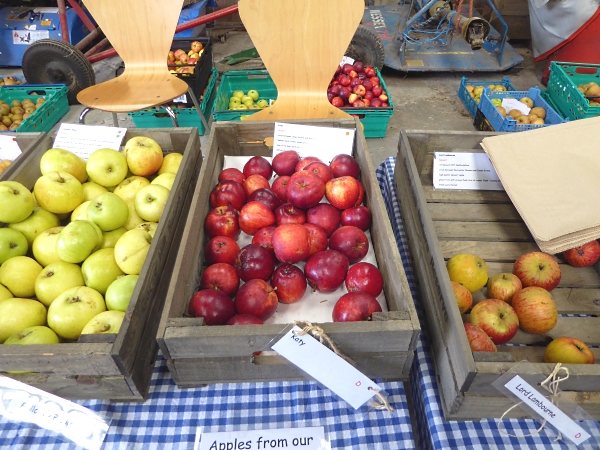 The Northern Fruit Growers had an interesting display showing “Bismark” apples, said to be all from the same tree. Some were perfect, some were frosted, some had insect damage, some had scab fungus and some were just funny shapes. How many apples from commercial growers are wasted because they aren’t perfect? 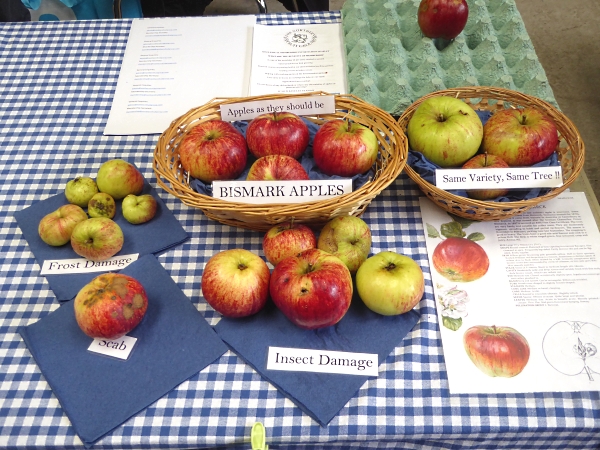 Gorse Hill is known for its Yellowhammers, a bird that we’d still like to bag for our list. We wouldn’t have turned our noses up at a Bullfinch, either. No sign of either, to our regret. All was very still and quiet, apart from a gas gun bird scarer going off in the next field, so all we saw were wheeling flocks of disturbed Wood Pigeons. No new flowers or trees today, either. There are wonderful views overlooking Ormskirk church from the top of Gaw Hill. It’s one of only three churches in England to have both a tower and a spire (the other two are in Wiltshire) and the only one which has them both at the same end of the church. 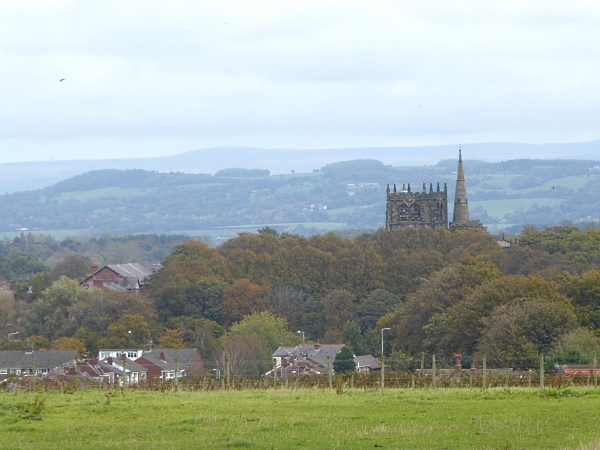 At Aughton Park Station we were amused to see the tough-as-old-roots Himalayan Balsam sprouting out of the gabions of stone which support the banks of the cutting. 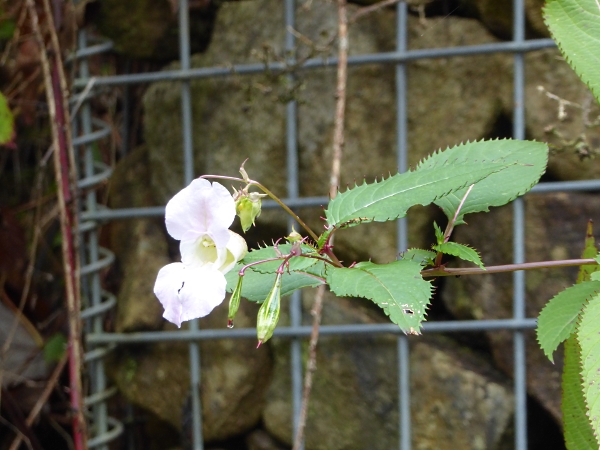