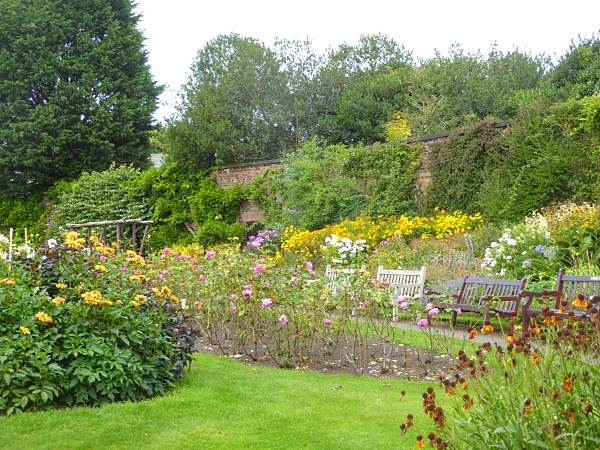 By entering Reynolds Park at the “wrong” (east) end, we came straight into their wild flower meadow. Much of the early blossom had gone over, but there was still a tangle of Teasel, Corn Marigold, Oxeye Daisy, Purple Loosestrife, Common Toadflax, Greater Willowherb, Creeping Thistle, Green Alkanet, Greater Plantain, Red Campion and Bird’s Foot Trefoil.  Amongst the trees, we spotted two young Dawn Redwoods, and the first fruits of the Yew were ripening. 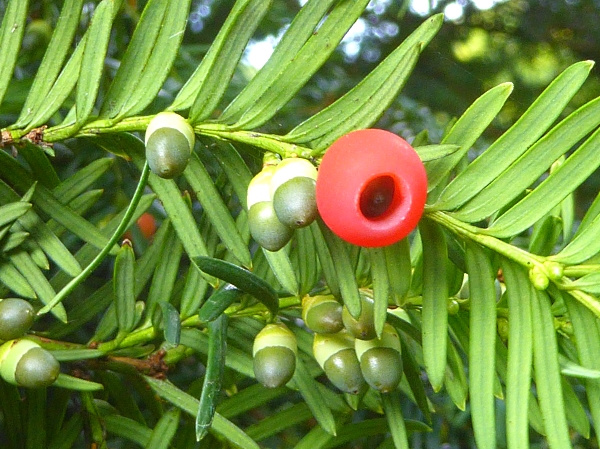 There is a collection of tall columnar trees on the lawn north of Calvert Court, and I hoped one was going to be an Incense Cedar, one of the trees still outstanding on our I-Spy list. Incense Cedars aren’t cedars at all, they are in the Cypress group. The tree we looked at was the right tall thin shape, and was definitely a cypress from its cones, but the crushed foliage is supposed to smell strongly of boot polish, and this didn’t. No tick for Incense Cedar today!

The last time we were in Reynolds Park was August 2014. We followed their tree trail leaflet then, and found an error – the tree they had labelled as a Tree of Heaven (number 10) is now correctly marked as a Black Walnut. It’s on the left in the photo below, and the long leaves are very elegant, with the leaflets at the tips catching the light like a spear points. 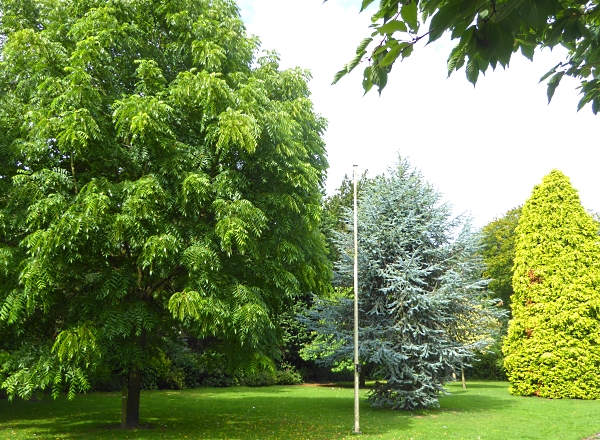 There is an old sundial there, and written around it is the Latin tag from Virgil – Solem quis dicere falsum audeat. “Who will dare to say that the sun is wrong”. In British Summer Time in the UK the sun IS wrong, of course, or at least the clocks are. We admired the green and gold topiary “crown” garden, made with Yew and Golden Yew. It looks most effective on the aerial view. 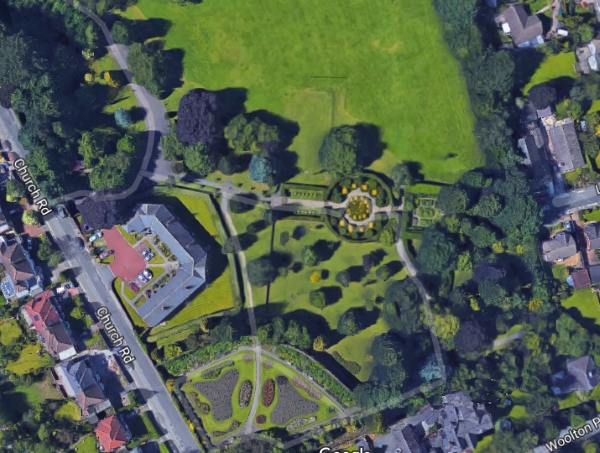 The Deodar Cedars had some big cones, but the  cones on the Blue Atlas Cedar were still very young. 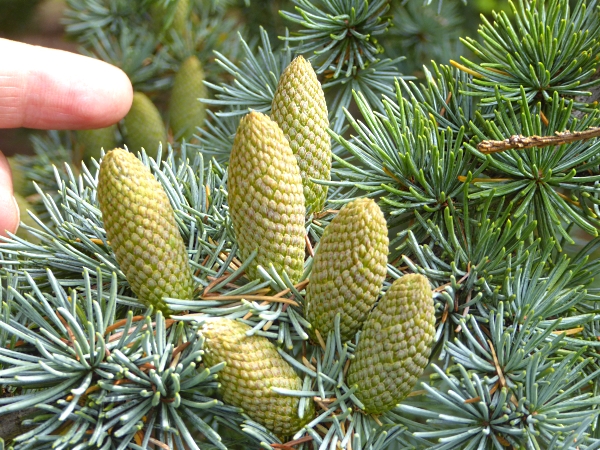 In the sunken garden Goldenrod was flowering in profusion. Regrettably, it was the Canadian Goldenrod, not the native plant we want for our list. There was a cluster of big fungi the size of saucers growing under a bush, looking and smelling very like edible mushrooms. We were tempted to snaffle one or two, but good sense prevailed. You never know … 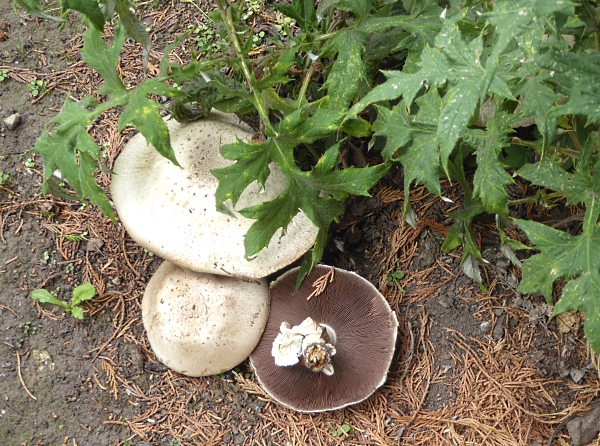 A loud call made us look up to the top of a Cypress, and there was a Great Spotted Woodpecker silhouetted against the sky, probably a juvenile with that red cap. 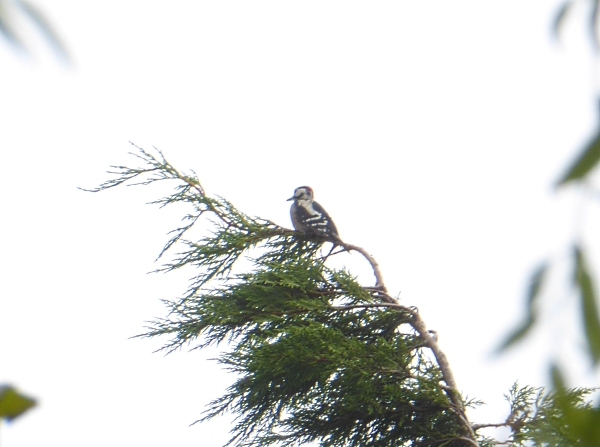 The walled garden had a wonderful display of Roses and Dahlias, and there were white and blue butterflies on the wing. The young Indian Bean Tree in the eastern corner bed is growing well and the Judas Tree against the south-facing wall next to the central gateway was flourishing, with bigger leaves than I’ve seen on any other Judas Tree in Merseyside.  The Tulip Tree had flowered profusely, too, as there were very many young fruits.  In another corner bed was an unpretentious little tree or shrub, only about 4 or 5 feet tall, with droopy leaves with a yellow midrib, bearing gorgeous little red fruit looking like raspberries on cocktail sticks. Happily, there was a label by the base of the trunk. It’s a Chinese Dogwood, Cornus kousa ‘Chinensis’. The fruits are said by the RHS to be edible but insipid, but a US forager’s blog called Wild Harvests says “I found that they have a soft creamy texture and sweet flavor similar to papaya” and the author mashed them up to add to a smoothie. 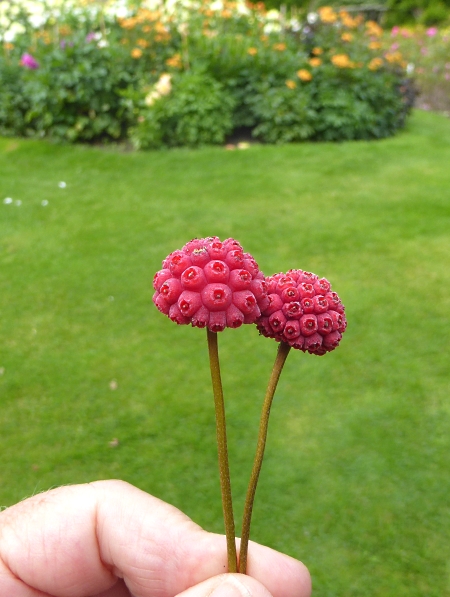 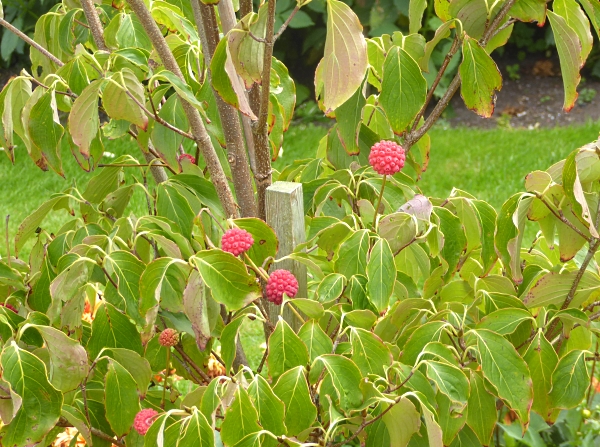 South of the topiary crown is another lawn with specimen trees. There were a couple of dark rings of lush grass, probably made by some kind of Fairy Ring fungus, although there were no toadstools.  Trees included various Maples, a probable Oriental Plane and this little beauty with chocolate brown bark and small glossy crinkled leaves which I think is an Antarctic Beech Nothofagus antarctica. 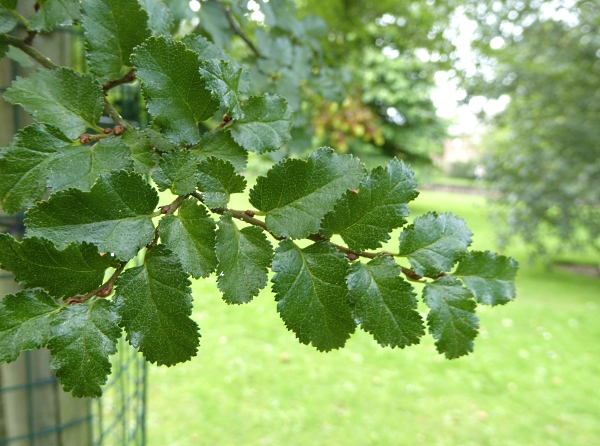 Apart from the GSW, we saw hardly any birds today, just Magpies and Wood Pigeons in the park.  We had no new birds, trees or flowers for the I-Spy lists today, which is unusual. We are down to the hard-to-get ones now!  We ambled down Church Road towards Woolton Village. Since it was a Bank Holiday weekend there were groups of tourists about. The Eleanor Rigby gravestone in St Peter’s churchyard had two walking guides with their tour groups around the stone, and a Beatles Taxi Tour was just leaving. 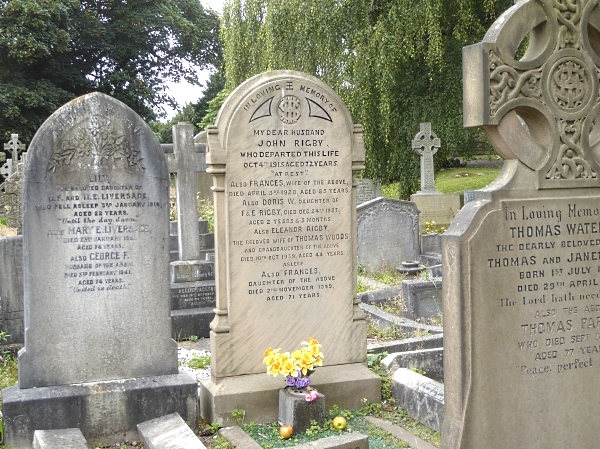 In the park and on the bus journey home we noticed how badly the Horse Chestnut trees are being affected by the Horse Chestnut Leaf Miner. I don’t think we saw any healthy green-leaved ones anywhere.  The last time we were in Reynolds Park three years ago, it was new to us then, but now it’s a common feature of autumn.