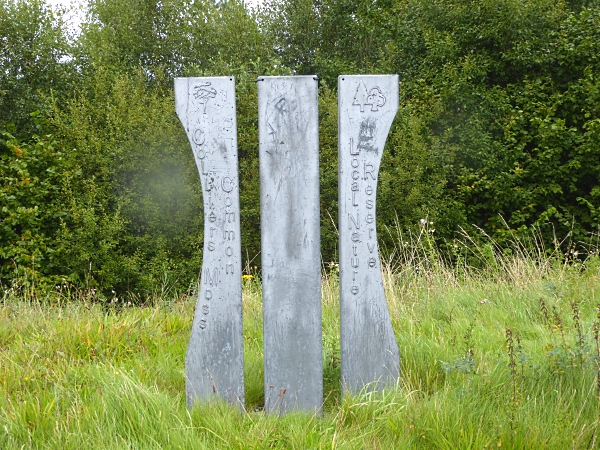 We haven’t been to what used to be called Bold Moss for at least seven years, and now all the signs call it Colliers Moss Common Local Nature Reserve (with no apostrophe!).  The way in is different, too. From St Helens Junction Station it’s a bit of a trek (well, 600 yards!) along Leonard Street and Hoghton Road until the public footpath sign on the right, just before Hoghton Close, leading to Sutton Car Spares. Then right again. Our efforts were rewarded with two good garden trees on the way. One was this rare and lovely yellow-berried Rowan Sorbus aucuparia ‘Xanthocarpa’. 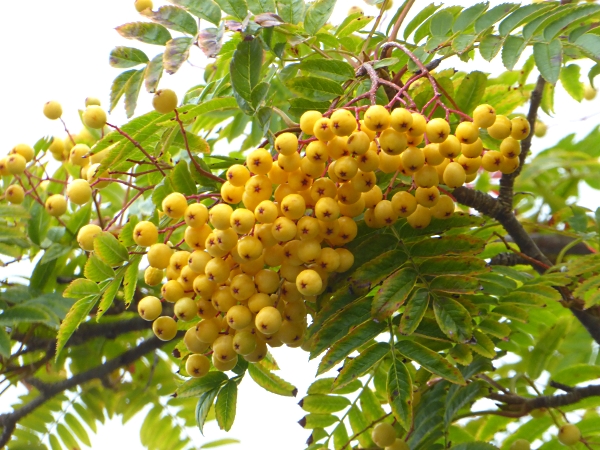 The other was a Common Pear in a garden near the junction of Hoghton Lane. It was fruiting well, and the householder has strung a net underneath, as the Olive farmers do. It gains us 10 I-Spy points, taking the total to 1180. 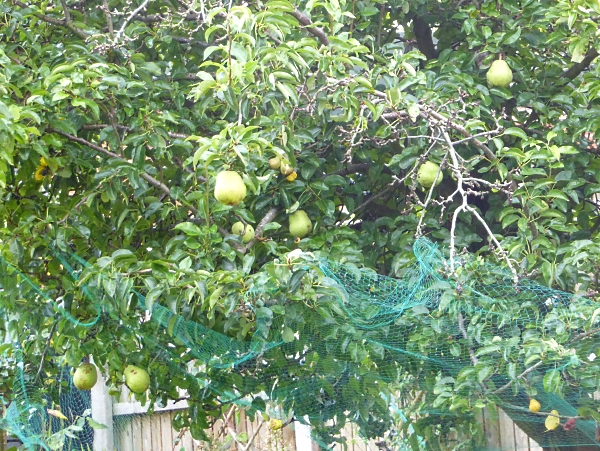 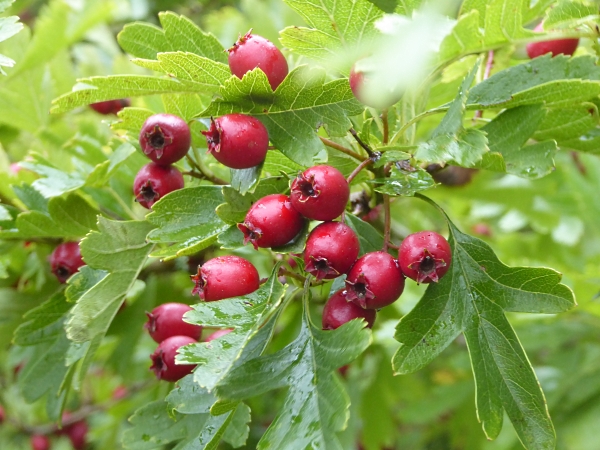 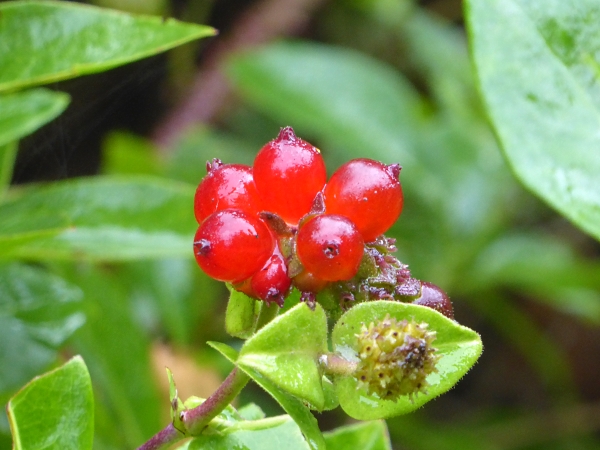 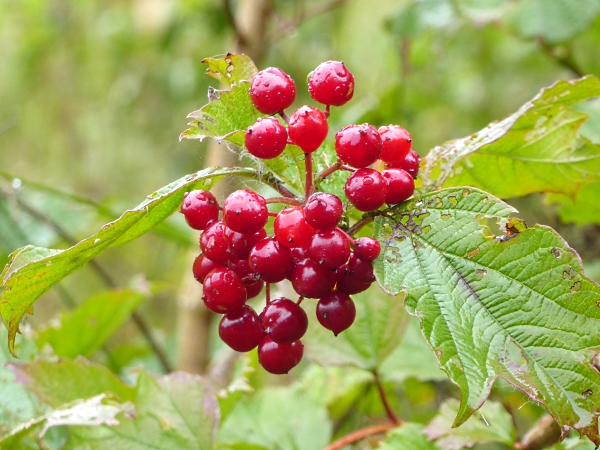 It was cooler, with a fine drizzle, but there were still some flowers out: clumps of  Himalayan Balsam and one patch of Everlasting Pea, Rosebay Willowherb and Great Willowherb, Ragwort and Evening Primrose, and the remains of Tutsan, Mullein and Teasel. The damp grass and clover was dotted with low-growing little white flowers, which turned out to be Eyebright, as we had guessed. It’s semi-parasitic on the roots of grasses, all parts are edible, and it has been used in folk medicine since the Middle Ages to treat eye inflammations and infections, coughs and poor memory. 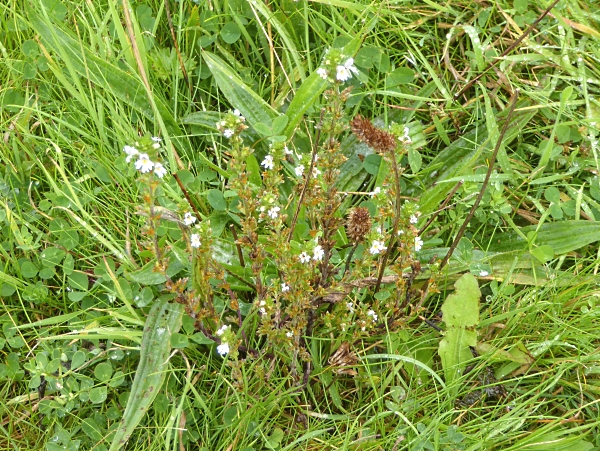 The trees were mostly young Birch and Alder, which might have  regenerated naturally, but at a bend in the path we spotted an unusual little sapling with leaves like a Locust Tree (Robinia) but with quite long (2 cm) thorns at the bases of the leaves. The thorns made me wonder if it might have been a Honey Locust (Gleditsia), but I see that Locust is supposed to have thorns, too, although they are described as being shorter. Either way, it’s an unusual tree for a reclaimed common. 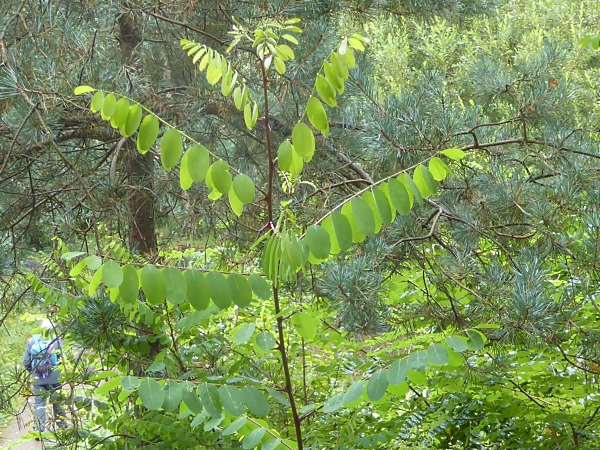 There is a small pond by the Millennium bridge where we have seen Damselflies and Dragonflies in the past, but it was too damp and overcast today. Apart from the Rabbit droppings and a single Goldfinch, there wasn’t much going on. But it was refreshing to have the place almost to ourselves, with hardly any people, dogs or bicycles. From a steep viewpoint hill there was a splendid vista to the southwest, and we could see “The Dream” at Sutton Manor, the distinctive profile of Frodsham Hill, the old Runcorn-Widnes Bridge almost end-on, the suspension pillars of the new bridge, and Fiddler’s Ferry Power Station. There were no seats for lunch, so we sheltered from the light drizzle on dry moss under a little grove of Ash trees.

Further east there’s a deep lake, which seemed almost deserted at first, just two Coots and one Moorhen, with two or three Mallards. Then a Cormorant appeared, diving for fish, then drying its wings.  A Little Grebe popped up too. 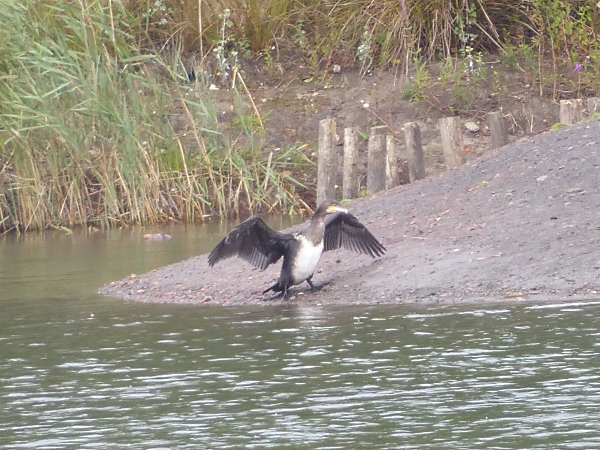 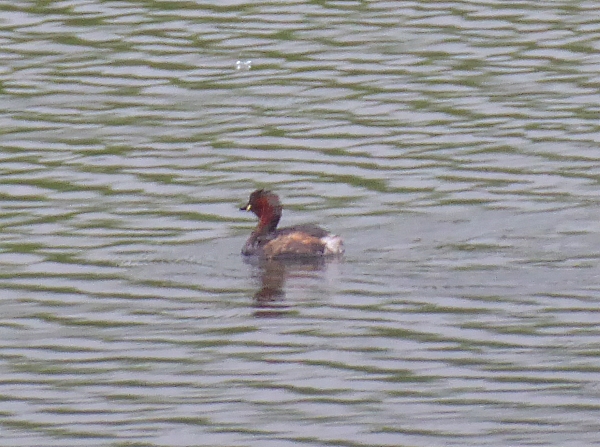 Suddenly there was a Kingfisher! It flew across the lake to the far side, just a glimpse, and we didn’t see where it went. Off in pursuit around the lakeside paths, and we found the inlet where it had probably been heading, somewhere around the back of the island, but nobody saw it again. 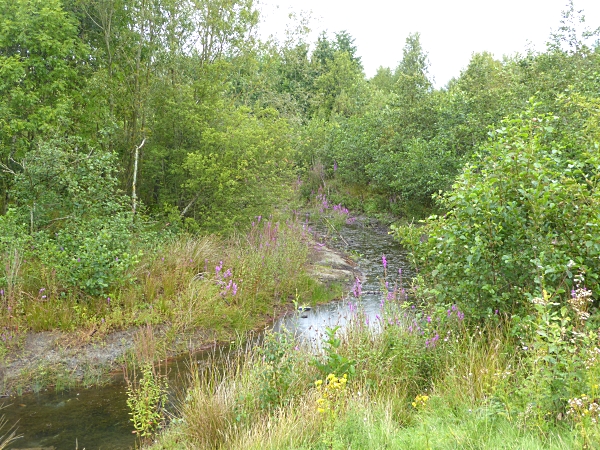 Later in the day we spotted just one brown butterfly on the wing. I find it hard to tell whether this is a  Gatekeeper or a Meadow Brown. Has it got one or two white dots in that black spot on the upperwing? You can only see one, but it’s half covered by the other wing. A second white dot would make it a Gatekeeper. 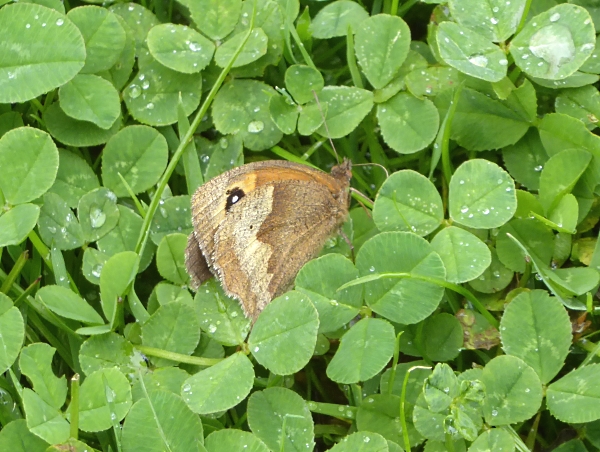 One shrub had some small black fruits like little plums. Were they Sloes? They had a bitter taste, apparently, although I didn’t try one. The twigs didn’t look like Blackthorn. I think they were either Purging or Alder Buckthorn, but I don’t know them well enough to be certain.  And a final treat, a Robin’s Pincushion on a Dog Rose twig.  It’s a lovely thing, and it’s surprising that it’s actually the gall of the Bedeguar Gall Wasp Diplolepis rosae. 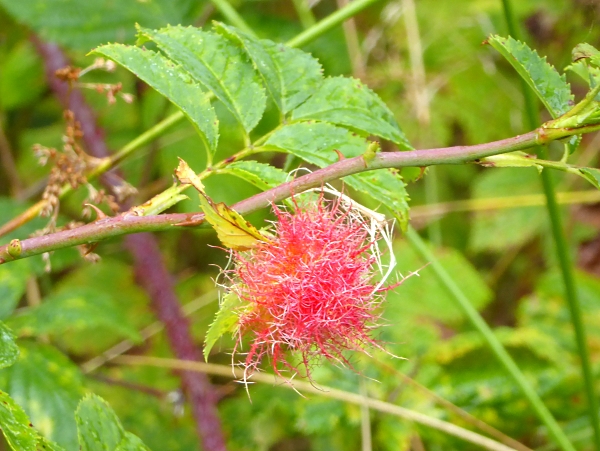