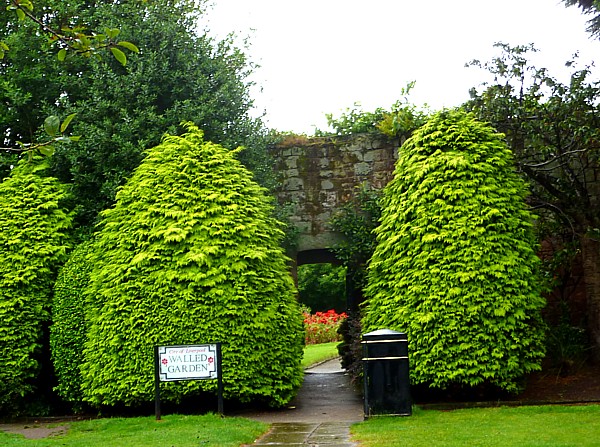 We were promised the tail end of Hurricane Bertha today, but although it rained lightly during the morning, it cleared up in the early afternoon. Not such a wash-out as we had feared. We concentrated on trees today, and kicked off by identifying a Judas Tree against the wall of the Walled Garden. Then we followed an old leaflet, the “Reynolds Park Tree Trail”, which shows ten specimen trees, each marked with a post bearing a number and a nameplate. We didn’t do them in the right order and we found one that was definitely wrong!

Number 8 is an Indian Bean Tree, but it has been cut down since the trail leaflet was printed. Now it’s sending up new shoots in the centre of a flower bed. 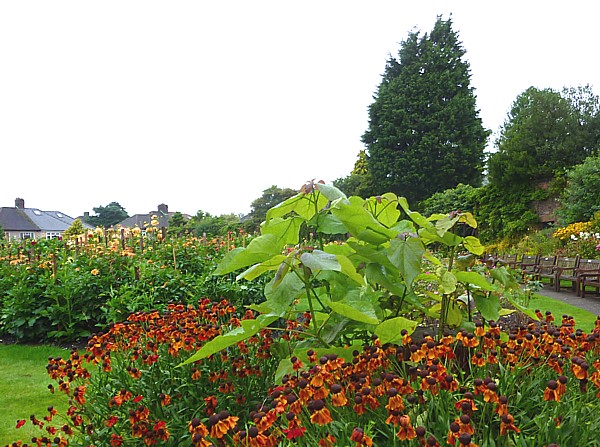 Number 9 is a Tulip Tree in the corner of the walled garden. Number 6 is a Weeping Willow and number 7 is a Wych Elm behind the hedge of the (closed) sunken garden, and which overhangs the path. Number 5 is an Italian Alder with its much larger leaves and cones as compared to the normal Alder. The picture below shows a ripe 2013 cone and an immature green 2014 cone. 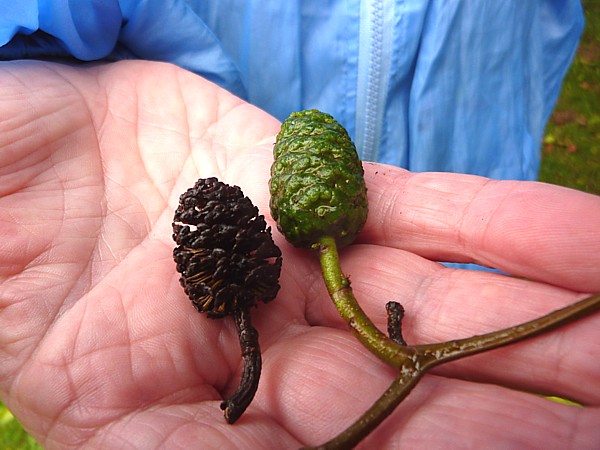 Number 4 is a Common Walnut. 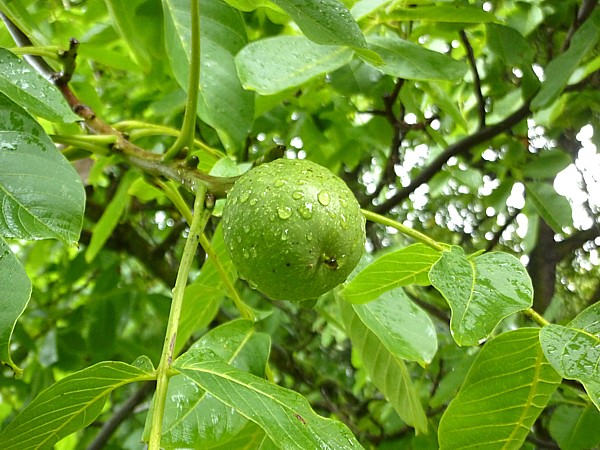 We took a diversion to their wildflower meadow, planted from plugs over the last few years and still a work in progress. We should come back earlier next year and see it in it’s full glory. 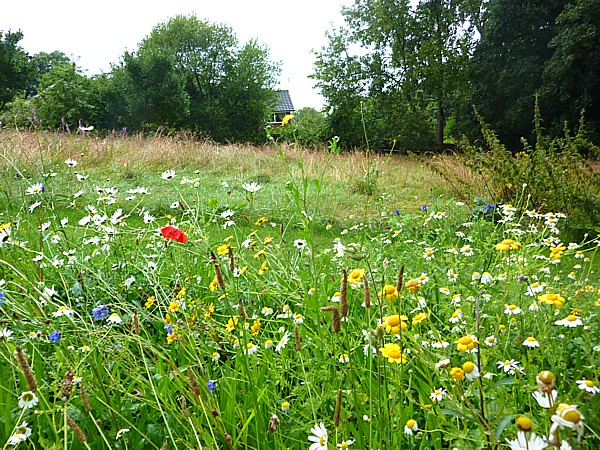 Tree number 3 is said on the leaflet to be an English Oak Quercus robur, but the marker at the tree itself says it is a Turkey Oak Quercus cerris. We couldn’t see any acorns or cups on the tree or on the ground below, to see if they were stalked (English Oak) or unstalked and spiky (Turkey Oak). The leaves were oak-leaf-shaped, and perhaps a bit longer and slimmer than English Oak leaves, so Turkey Oak was a definite possibility. We sheltered under the big trees at this corner of the park for lunch. The light rain had nearly stopped, although we got a bit dripped on.

Number 2 is a Yew and number 1 is a Hornbeam. Number 10 was listed as a Tree of Heaven, but not in my book it isn’t ! It had big green single fruits on it. 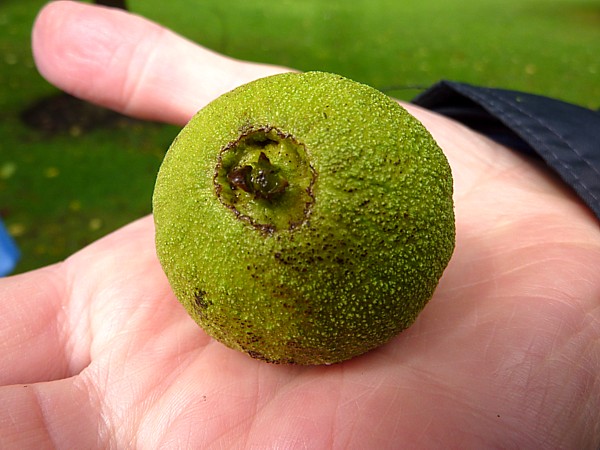 My book says the fruits of the Tree of Heaven are in “big panicles, each seed in a membranous wing”. See the Natural History Museum page for what they are supposed to look like.  I think it was really an Eastern Black Walnut, Juglans nigra. See this blog Exploring the World of Trees which explains how easily young trees can be confused. 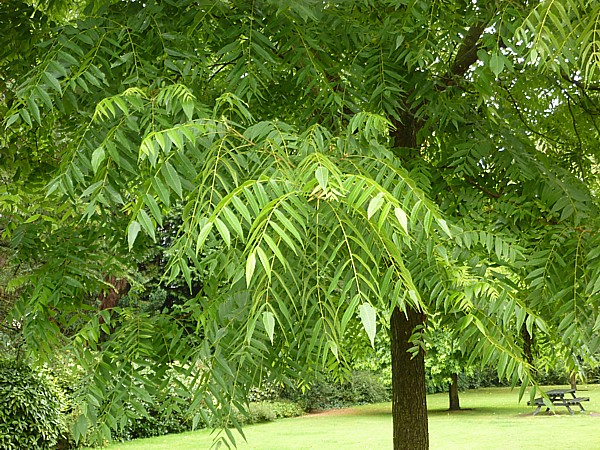 The foliage of the supposed Tree of Heaven

That area of lawn by the site of the old manor house (now new flats) has several nice young specimen trees. On the picture below the supposed Tree of Heaven is front centre, with a small blue tree behind it (behind the flagpole) and a yellow one beyond that. 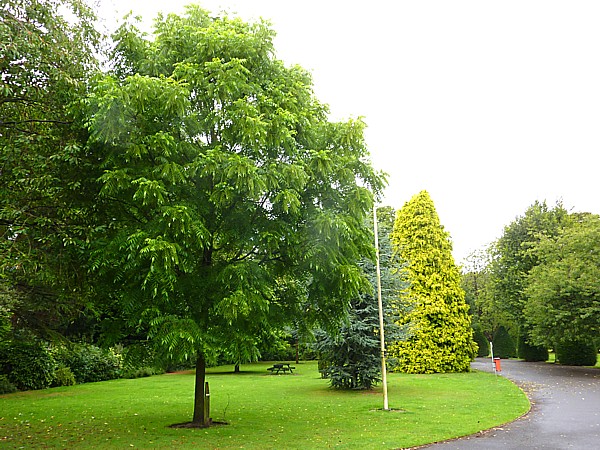 The blue one can’t be a spruce because the cones aren’t pendulous, so I think it’s a young Blue Atlas Cedar. 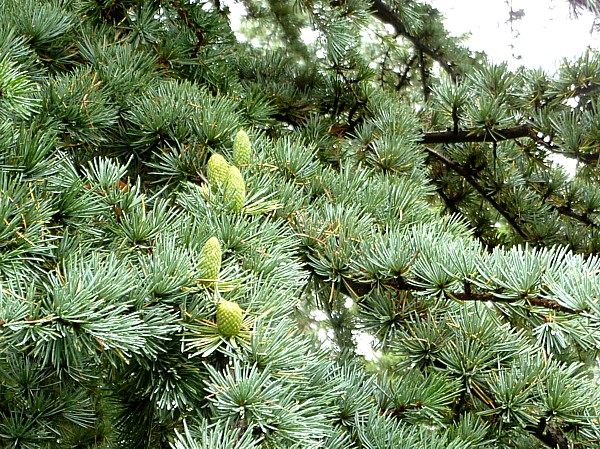 The yellow one is some sort of golden-foliaged Cypress. 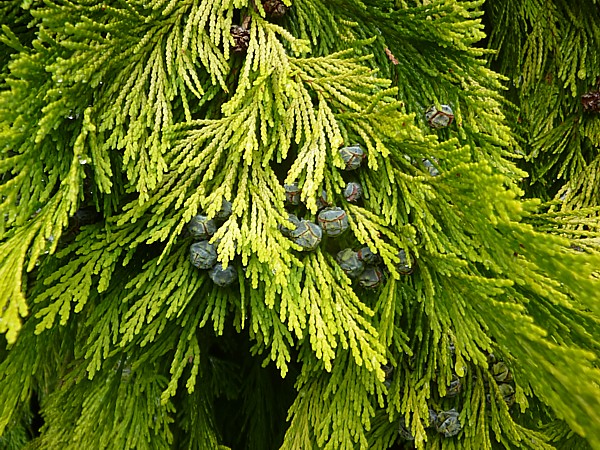 Another one looked like some kind of Maple/Acer but a crushed leaf had a strong aromatic smell. Was it an American Sweetgum also known as a Liquidamber? It is said to be “often mistaken for a Maple but leaves alternate”. I regret I didn’t note the placement of the leaves. 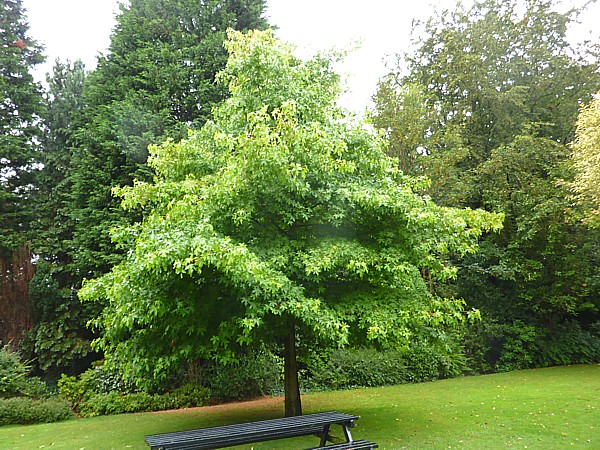 The topiary garden contains an arrangement of twelve hemispherical golden yews emerging from a circle of green hedges. (The centre left one is a new one, still growing). It is supposed to represent a crown and commemorates Queen Victoria’s Diamond Jubilee in 1897. 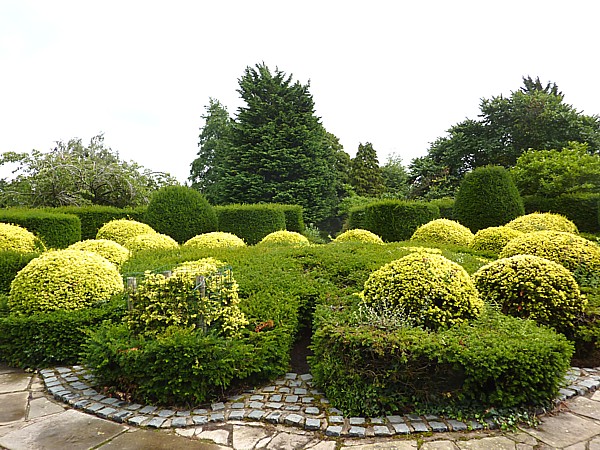 By the walled garden we stopped to examine a very damaged Horse Chestnut. The leaves were brown and patchy, caused by an infestation of the leaf miner Cameraria ohridella. At least 50% of the effective leaf area was damaged, although it was worse lower down. The Forestry Commission  says “The damage is primarily an aesthetic problem, and there is no evidence that infestation, on its own, causes dieback or a decline in tree health, or tree death. Consequently, there is no reason to fell and remove trees just because they are attacked by C. ohridella. Even severely infested trees will re-flush as normal in the following spring.” The offending leaf miner was first observed in Macedonia in the late 1970s and was in London by 2002. It is still spreading northwards. 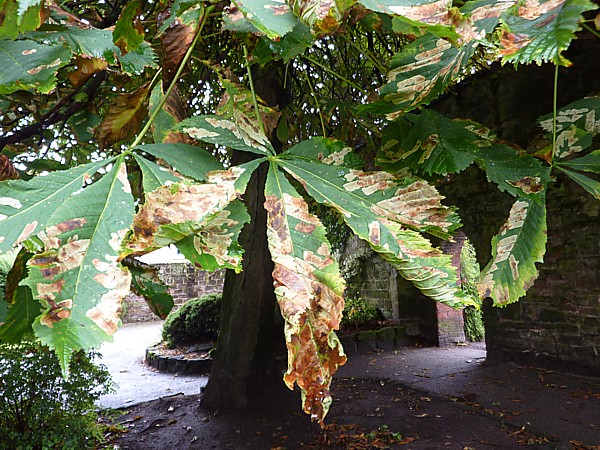 We didn’t pay a lot of attention to birds today, but we definitely saw Blackbird, Robin, Magpie, Wood Pigeon, and also some Grey Squirrels. We left the park at Church Road and had strawberry scones at Olive’s house in Woolton. Thanks Olive!