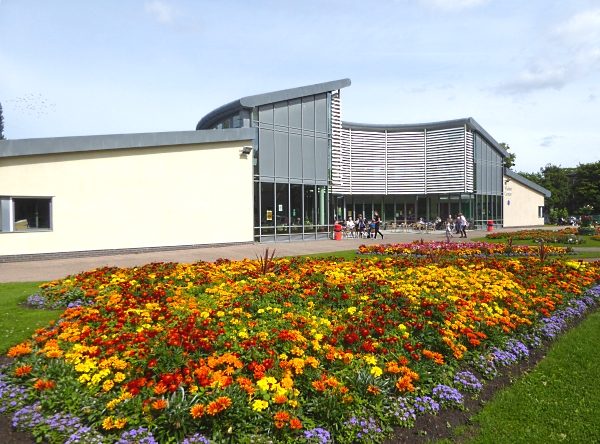 Another tree trail this week, following the plan in the Friends of Birkenhead Park’s “Unusual Trees” booklet (£2 from the Visitors’ Centre.) Our first target was the Black Mulberry Morus nigra, which is on the north bank of the Lower Lake, west of the Boathouse and on a bank near two park seats. It’s quite big for a Mulberry, and it’s intertwined with blackberries, but the red unripe Mulberry fruit were easy to distinguish. Several had fallen to the path below, probably bird-pecked. There’s a beaten track up the slope next to the tree, very probably made by foragers. 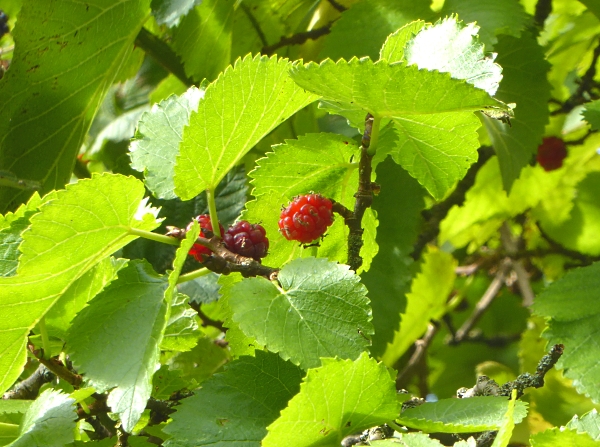 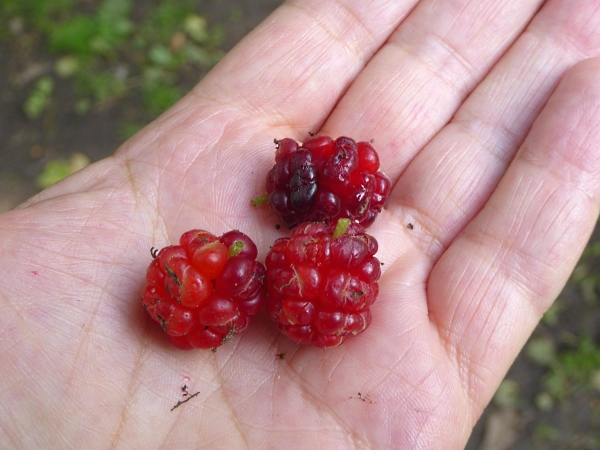 At the westernmost end of the Lower Lake, near the rockery, is a Cucumber Tree Magnolia accuminata.  The tree itself isn’t anything to look at, being tall and spindly, but the leaves are huge and the fruits are bright pink erect “cucumbers”. 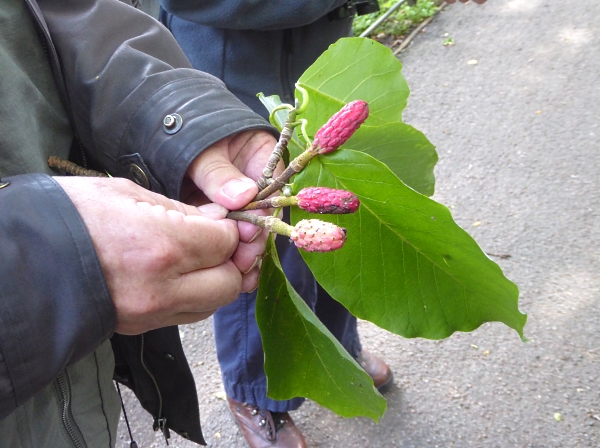 There were some butterflies on the wing including Speckled Wood and Common Blue. On the lake were only Mallards, Coots, Moorhens, Black-headed Gulls and large flocks of noisy Canada Geese. Several young Robins darted onto the paths, just getting their red breasts so had probably been driven off by their parents. One of us caught the flash of a Kingfisher flying low over the water. We wandered all around the eastern corner of the lake but didn’t see it again. Lots of hungry Pigeons and cheeky Grey Squirrels, though! 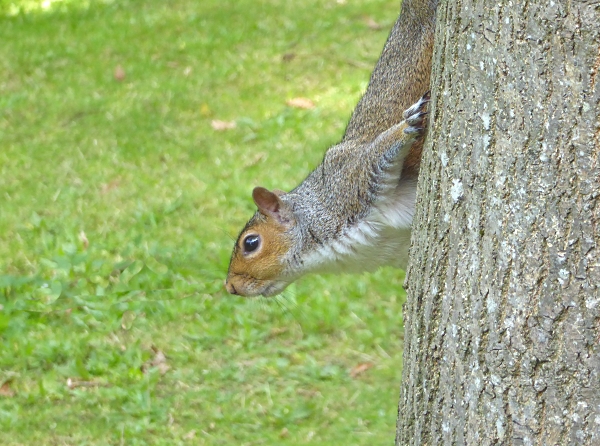 Some of the trees are getting their autumn colours. In this view over the lake the droopy yellowing one on the right is probably a Silver Pendent Lime, while the one on the far side, turning red, appears to be a Norway Maple. 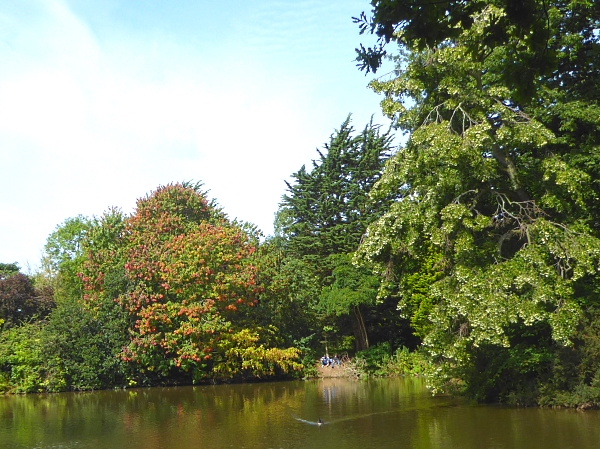 Some of the grass verges have been planted with tangled patches of flowers. There was the wild flower Redshank in amongst them, which we want for the I-Spy list. They weren’t strictly all wild flowers, because there was Alyssum, California Poppy and garden Marigold in there too. 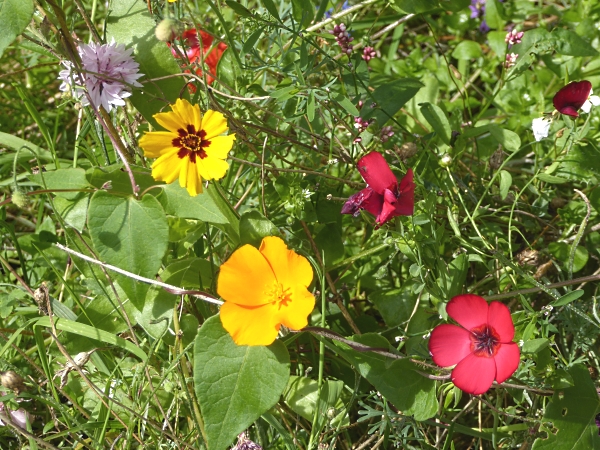 As the others headed for lunch Margaret and I lingered over a Lime tree, checking the features in both our tree books. We really want to learn these Limes!  We noted hairs on the fruits, which were round, in 4s or 5s, and all hanging down; hairs on the undersides of the leaves and the leaf stems;  buff hairy tufts at the base of the leaf and in some vein axils; big cabbagey leaves on some low shoots. Can we claim it as a Large-leaved Lime Tilia platyphyllos? I have checked again, and apart from the suggestion in the books that the fruits ought to be ribbed, which I’ve never found, I think we have cracked it, and we earn 15 points. 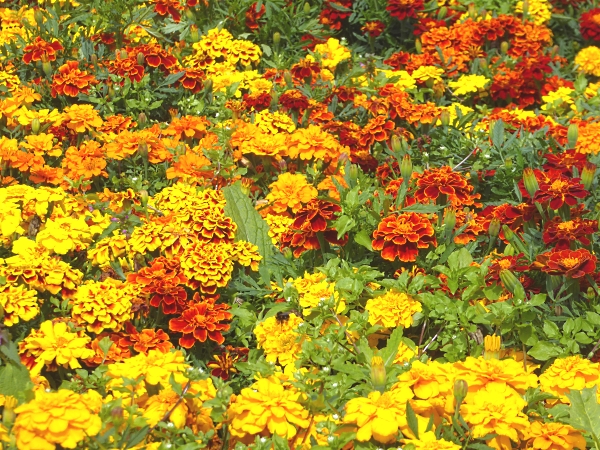 There were wonderful gold and red bedding plants in front of the Visitors Centre. After lunch we  headed for the Upper Park. Opposite the Victorian letter box where Park Drive crosses Ashville Road, there is a cluster of interesting young trees planted on a stone-setted pavement. We noted a Tulip Tree, what might have been a Small-leaved Lime, a Turkish Hazel and something like an Apple or Medlar but no fruit to confirm it. 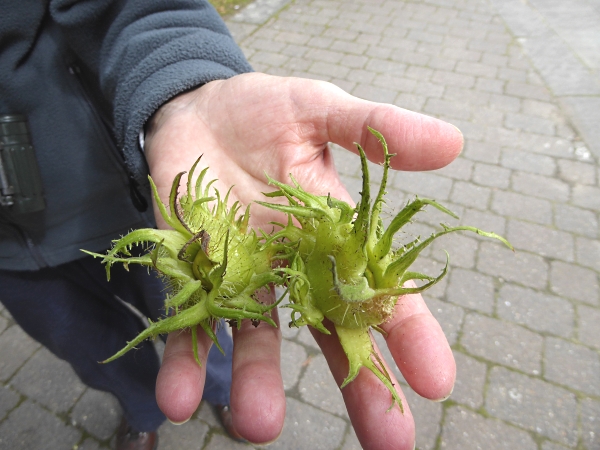 Floridly-bracted fruits of the Turkish Hazel.

On the north bank of the Upper Lake we admired a very young Monkey Puzzle, nearly dwarfed by its stake. Next to it was a handsome young Bhutan Pine, an uncommon five-needle pine. 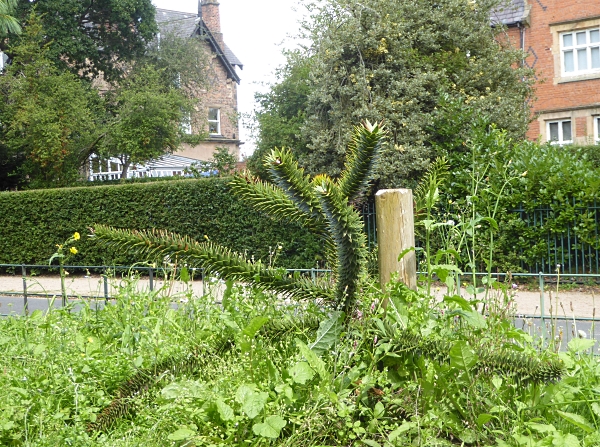 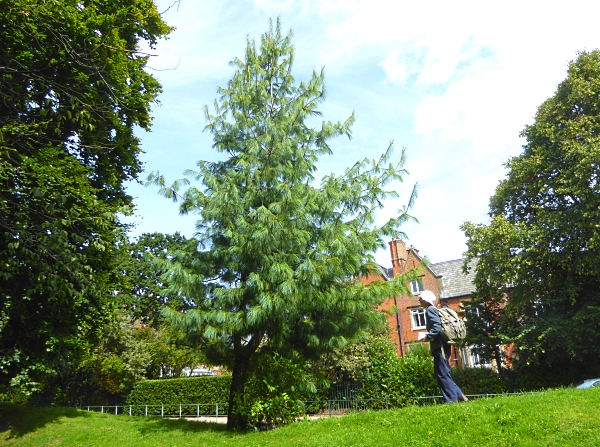 The Horse Chestnuts along that path are very badly affected by the leaf miner, with all the lower leaves browning and droopy. There’s a Strawberry Tree along there, too, but bearing no fruit. A big old Grey Poplar had mixed bark – the lower portions were craggy like a Black Poplar while the bark higher up was showing rows of dark diamond shapes on a light background, like White Poplar. 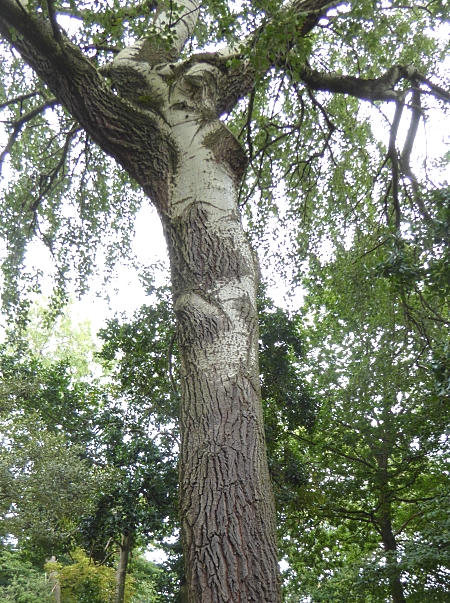 We had been looking out for the two surviving tall thin black Mallards which usually swim under the  bridge at north-east end of the Lower Lake. There had been a brood of five when we first spotted them in November 2011, but only two survived to March 2013. We spotted the survivors again in early 2014 and late 2015, and one last November. We were pleased to find what might be the same one loitering on the bank of the Upper Lake, and it must now be at the end of its sixth summer. 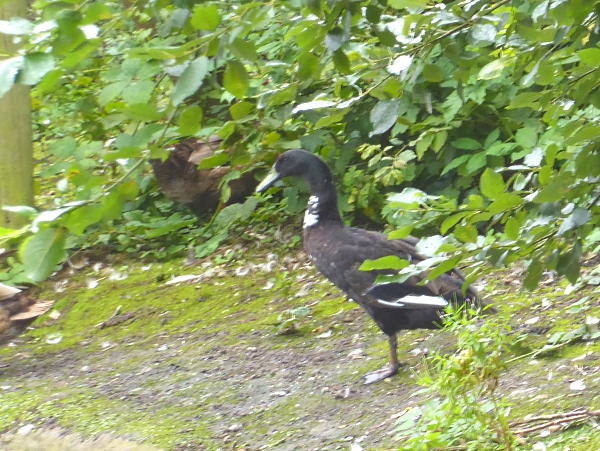 There are some lovely specimen trees on the meadow in the Upper Park and we walked out to admire the grove of Purple Cherry Plums (Prunus pissardi or Prunus cerasifera ‘Pissardii’). 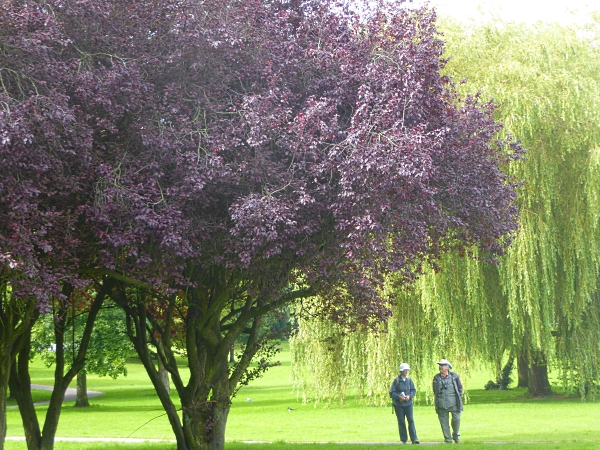 On the left of Ashville Road, approaching Park Road North, was a very pretty young Japanese Maple in its autumn colours, which we also want for our list. 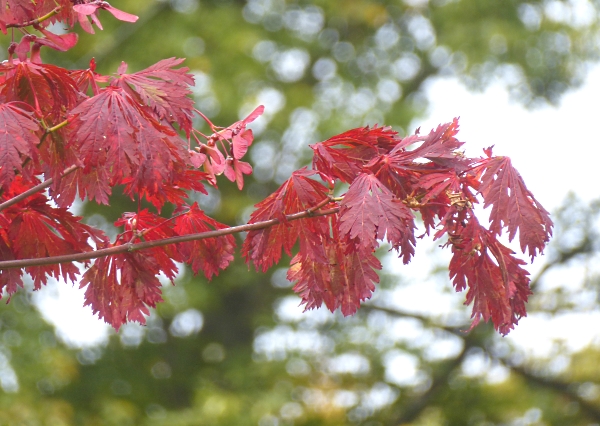 Our last tree was the Hybrid Strawberry by the traffic lights, with its interesting red peeling bark. We had two new trees today, so we are up to 1170. One new plant, taking us to 1085, but we have been stuck at 1285 on the birds since early June.

Public transport details: Train towards West Kirby from Central at 10.05, arriving Birkenhead Park Station at 10.15. Returned from the same station at 14.22, arriving Liverpool 14.35.