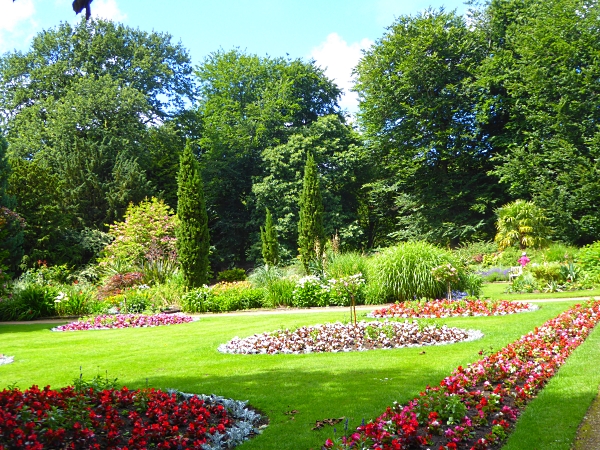 We entered the park from Ballantrae Road, at the south-west entrance. Just inside were two multi-trunked trees that appeared to be dead. A few leaves remained on one, which showed they were some kind of Maple. One had a clump of Pink Purslane at its base. 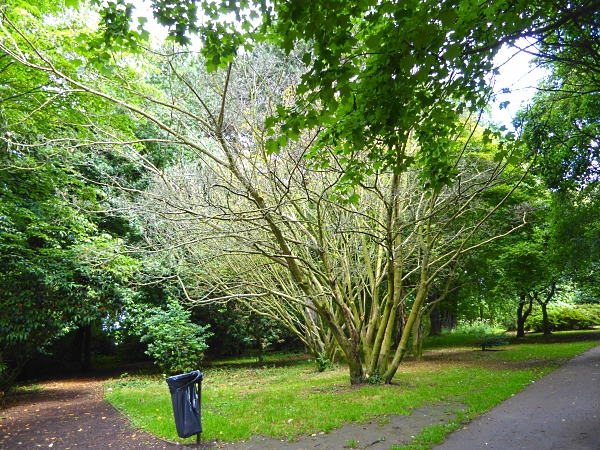 We walked in a vaguely anti-clockwise / easterly direction across the open south-central area, tree- spotting as we went. This Sweet Chestnut was in bloom, showing the long male catkins at the top and the smaller female flowers in the centre, which will become the nuts. 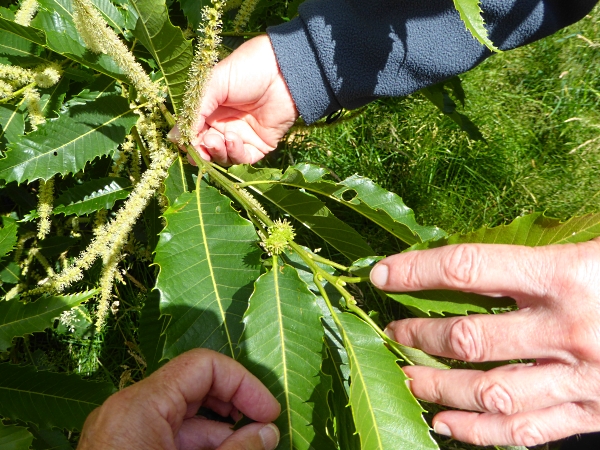 We also noted Hornbeam, Turkey Oak and Common Lime. We were really looking for the Black Mulberry Morus nigra which we found in the open area south-east of the Manor House, east of the ha-ha, near some Scots Pines. It looks like the upper branches have died, and it has been pruned back. It was still leafing bravely though, and bearing unripe fruit. That’s 20 I-Spy points, taking us to exactly 1000, so we savoured the moment. 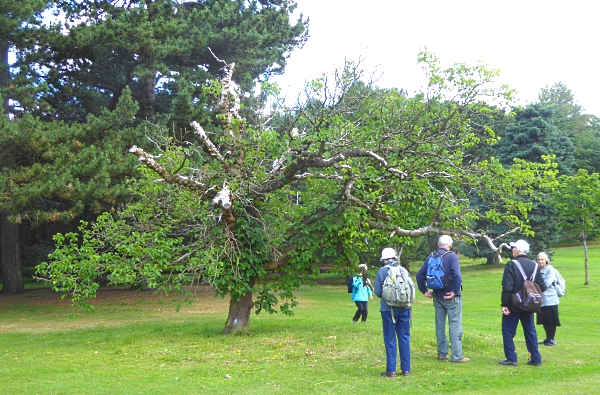 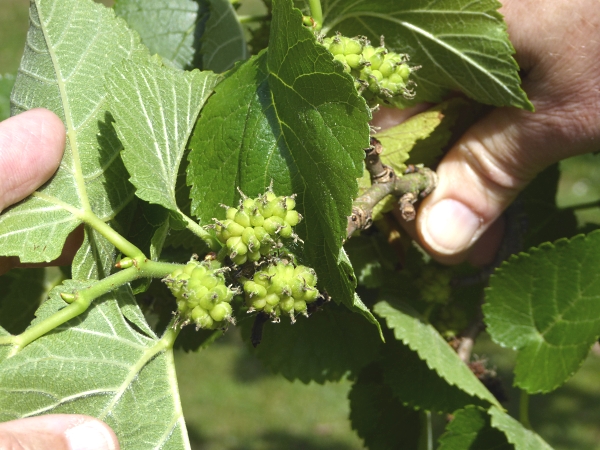 Behind the bike racks next to the Mansion House we looked at what we remembered to be a Snowbell Tree, Styrax japonica, but it didn’t look like the small trees that I have been seeing blooming prettily in parks and gardens recently. Not a Snowbell after all, our memories were faulty, it was the rarer (Mountain) Snowdrop or Silver Bell Halesia monticola. There is a Snowberry bush in front of it, just to add to the confusion. 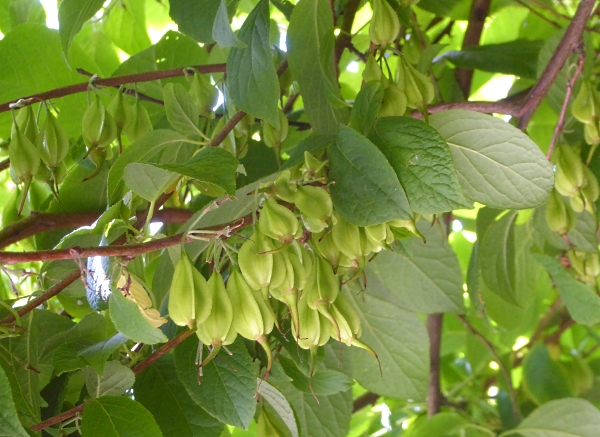 Along the wall of the Gent’s toilets is a patch of the rare parasitic plant Ivy Broomrape Orobanche hederae.  It has none of the green pigment chlorophyll so it cannot make food for itself, and is entirely dependent on the roots of the Ivy. 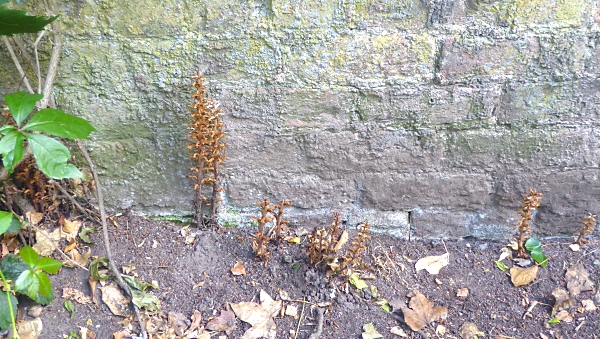 The Common Walnut tree by the flower beds had the Walnut Leaf Gall Mite Aceria erinea infesting the leaves. 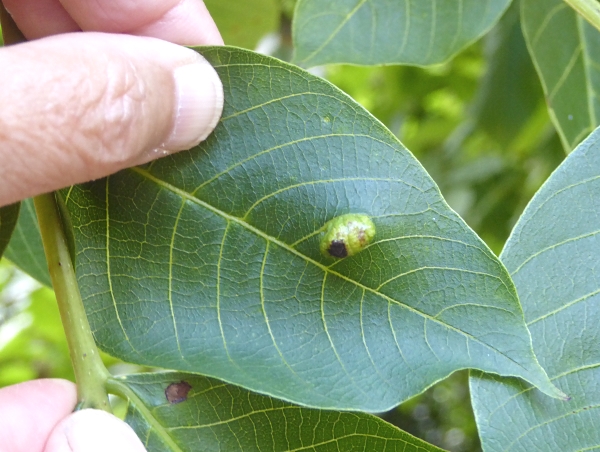 We had lunch in the Old English Garden, entertained by the very tame or cheeky (take your pick) wildlife which gathers at butty time. There was a Grey Squirrel on the edge of the pond, and several more of them under the benches. A Dunnock ventured out and there were two Robins and a Great Tit trying their luck. There was also a rather tame Jay skulking about on the Pergola. One of the Robins looked quite scruffy, and I saw it take a fly-by dip into the pond, without landing on a leaf, just skimming the water and wetting its breast. Was that why it looked so scruffy, because it was wet? Or was it infested with something and trying to relieve an itch?

I thought there was a Large-leaved Lime opposite the old stable block (now the Gallery area) but all we found was a cut-down trunk. The one at Flaybrick will be our last hope for those points. One of us spotted a shield bug on a Maple. The British Bugs shieldbug page has a lot of pictures, and I think it was the Red-legged Shieldbug Pentatoma rufipes. They are said to be widespread and common in wooded areas, orchards and gardens, and feed mainly on oak, alder, hazel and other deciduous trees including apple and cherry. 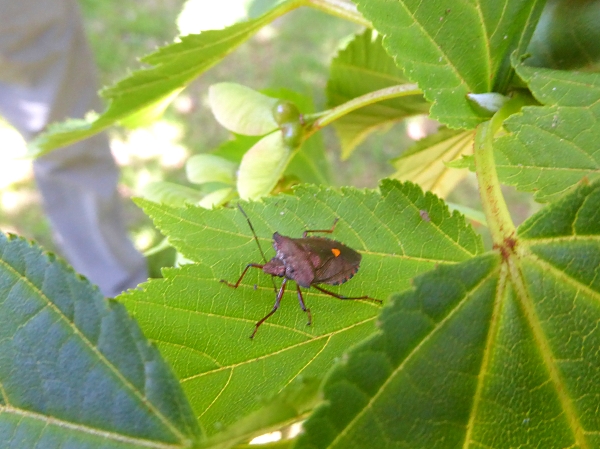 One of our target trees was this Japanese Red Cedar Cryptomeria japonica, which isn’t a Cedar at all, but a more primitive type of tree. It was worth 15 points. 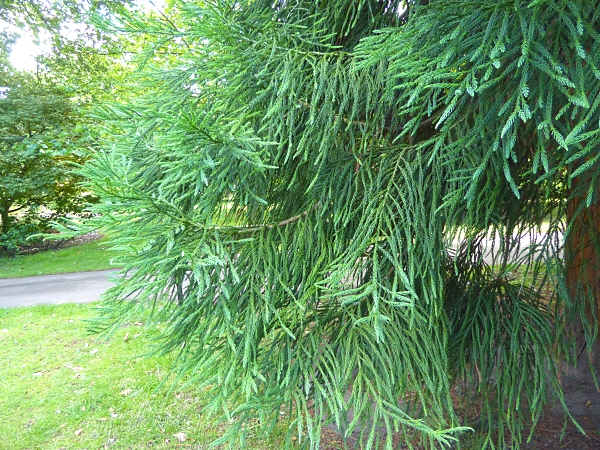 Another target was the Douglas Fir Pseudotsuga menziesii (another 15 points). As far as I know this one in Calderstones is the only one on Merseyside, possibly at the southern edge of its range. It’s another tree with a misleading name, as it isn’t a Fir at all, but is also from a more primitive group. Its name honours two great Scottish plant hunters, David Douglas and Archibald Menzies. The easiest way to identify it is by the distinctive cones, which have a long tridentine (three-pointed) bract that protrudes over each scale. 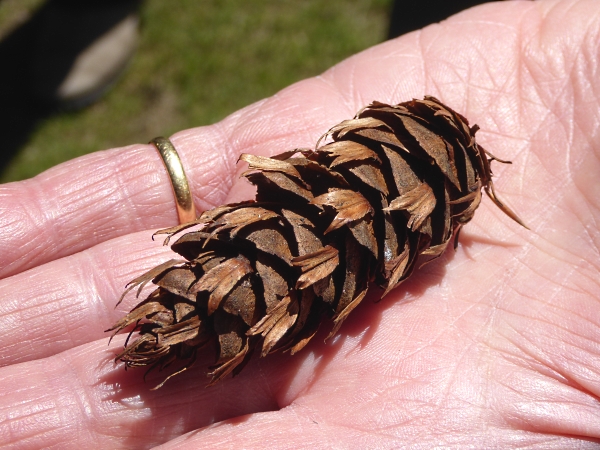 In the Swamp Cypress near the Allerton Oak we spotted a couple of young Blackbirds, looking very brown and fluffy, who had perhaps just left their nest today. We were looking for a flowering Tulip Tree Liriodendron tulipfera. We’d seen the small one on the lawn in front of the Mansion House and a much bigger one inside the Old English Garden, but there was hardly a flower to be seen. Had we missed them? Perhaps. They may start flowering as early as May. However, the big Tulip Tree near the Swamp Cypress still had some flowers so we claimed our 25 points. 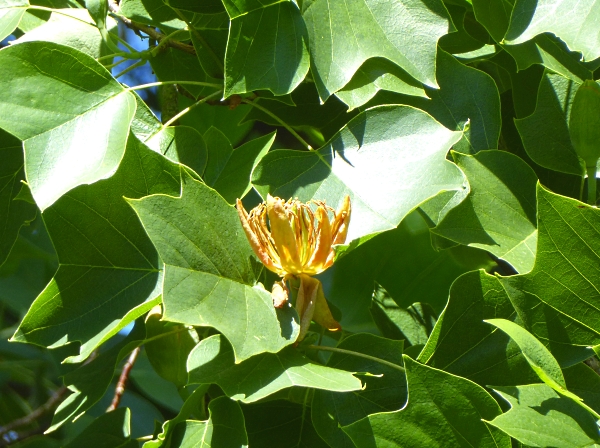 We saw no new birds this week. No new wildflowers either, although we correctly answered two questions on last week’s flowers, and thereby raised our score to 600. How does Hedge Woundwort get its name? Because the leaves were once used to dress wounds. The Rosebay Willowherb is also called Fireweed; do you know why? Because it grows on burnt ground. Trees are up to 1055 and I-Spy badges and certificates for passing 1000 will follow!  There are only 18 trees left to spot, worth 350 points at most. It’s possible we might yet get them all (except the English Elm, of course.)

While we were on the bus on the way back, we noticed that many Rowan trees have their berries just turning brown, and some are fully red. So that’s it, autumn already!