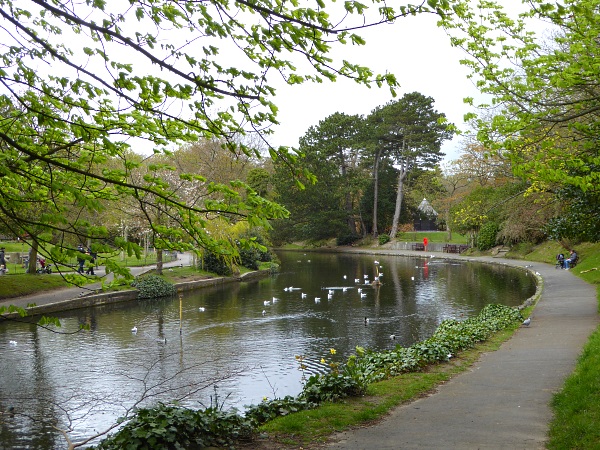 We had a long run on the bus this morning, almost the whole route of the 47. My goal was to see the magnificent pink Cherry trees on Preston New Road, planted in the last half mile before the Crossens terminus. There are over 100 of them lining both sides of the road, and when they all come out together they make a magnificent pink tunnel. Sadly, we were about a week too early. 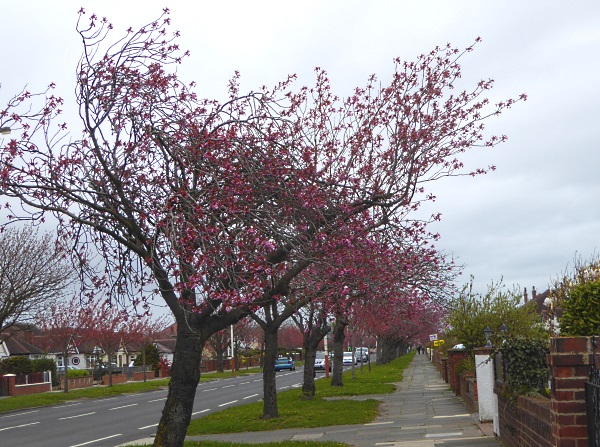 As we walked down Balmoral Road there were a few spots of rain, and it was overcast and chilly. We entered the Botanic Garden at the north end, and lunched overlooking the (empty) flowerbeds outside the Fernery. We paid it a quick visit, appreciating the humid warmth inside. 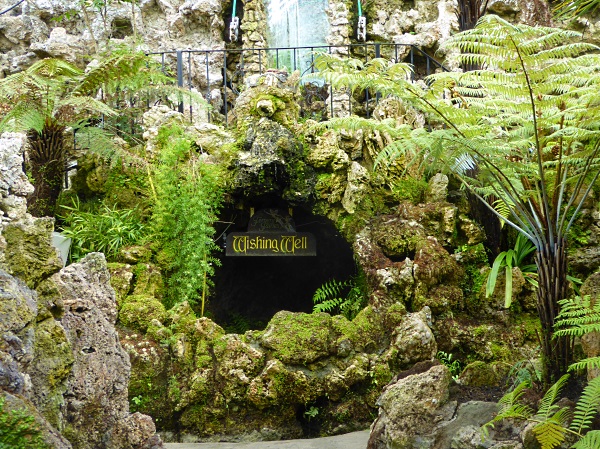 As we strolled around the aviary the sun started to come out. They have many small birds in the parrot / budgie line and also Peacocks, a huge black Turkey and a pair of very ugly Muscovy Ducks with some very cute cream and brown ducklings (or are they goslings?) It’s hard to believe such handsome young birds will grow up to be so strange-looking. The ugly duckling in reverse! They also had a pair of Shelduck, which I do prefer to see in the wild. Happily, they also had Mandarin ducks, and it was nice to see a pair together. When we see stray Mandarins in parks, there’s usually only a single bird, and we joke that we should set up a dating agency for them!

They also have a pair of Golden Pheasants and a pair of Lady Amherst’s Pheasants. 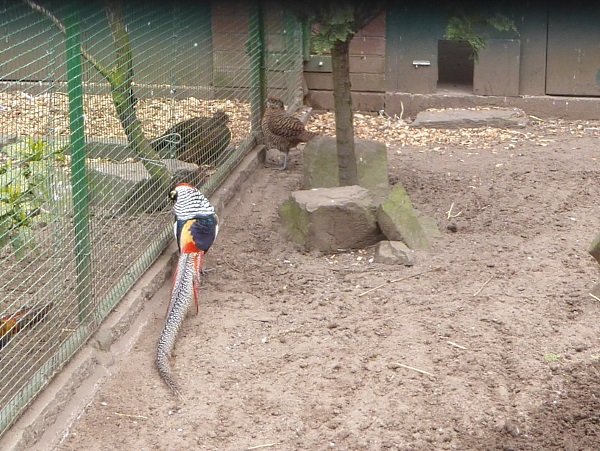 Nothing exciting on the lake. Black-headed Gulls, lots of Mallards, several Moorhens nesting and a pair of Mute Swans. One mother Mallard had 11 well-grown ducklings. There had been 12 of them when I recce’d on Saturday 16th April, so perhaps I miscounted, or perhaps she has lost one.

They have a mini-Arboretum, which is a low grassed area within a bank of old Beeches. They have a young Deodar (behind the cherry blossom on this picture). 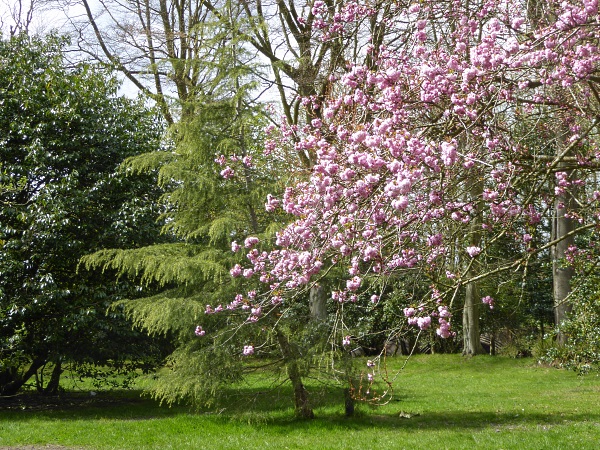 There is also a row of four young conifers, and the two on the left are very intriguingly droopy. 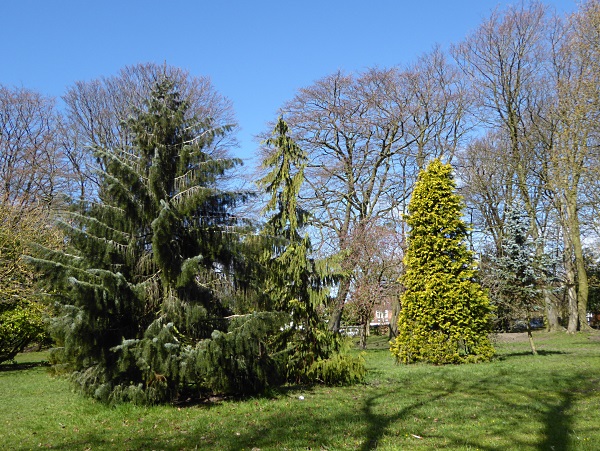 The leftmost one has foliage in the Yew / Redwood / Hemlock group, and I hoped for a while it was a California Nutmeg Torreya californica, but couldn’t match it in the book. California Nutmeg leaves are supposed to smell of sage or turpentine, but these didn’t. The second droopy one was some kind of Cypress. I think it might be a Nootka Cypress Chamaecyparis nootkatensis var. Pendula, described as a tree with upturned branches from which the foliage “hangs in curtains” (yes). Male flowers “abundant, massed at the tips” (yes) and cones “globular, 1cm across, each scale with a large curved spine” (yes, they have the spine, but I’m not sure if it’s curved.) 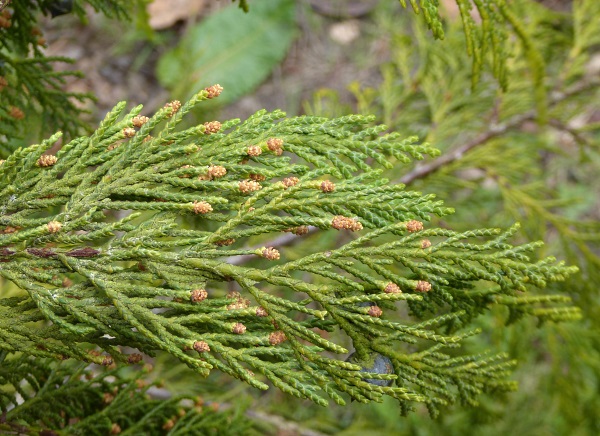 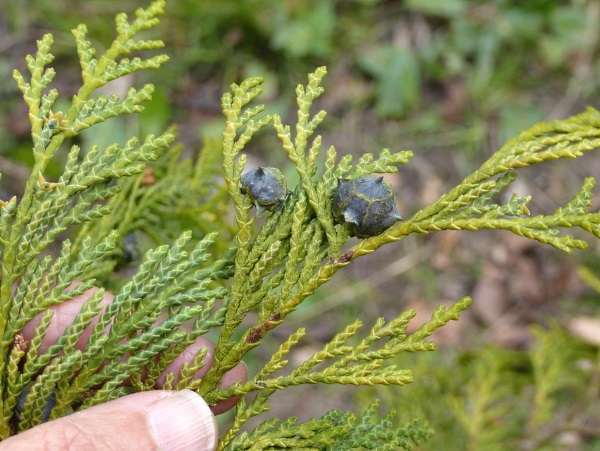 The third one was some kind of golden Cypress and the fourth one was probably a Spruce. That’s about as far as I get with conifers!

Near the lakeside was a fallen Oak, with last year’s golden brown foliage still on, but apparently quite dead. The kids are using it as a climbing tree. 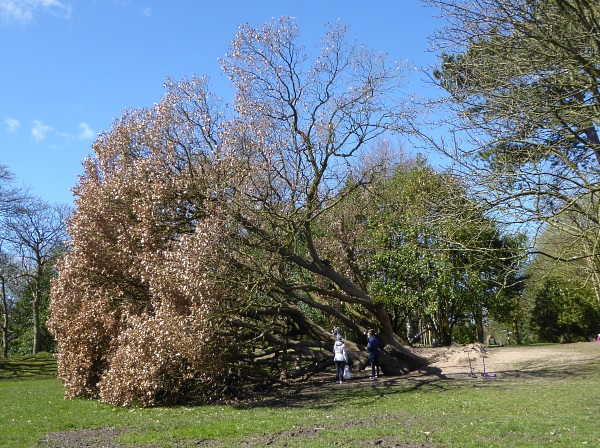 Under a stand of Scots Pines were lots of well-chewed cones. Looks like the work of Squirrels, probably Greys, but we didn’t see them. 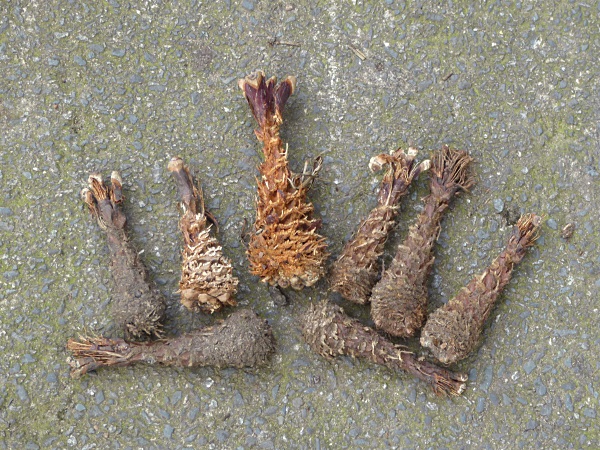 There’s a Tulip Tree on the lawns by the lake (with no distinctive leaves yet, but I cheated and read the nameplate) and also this old Mulberry outside the shop. The sign, which looks quite old, calls it a Common Mulberry Morus nigra, but we call it the Black Mulberry nowadays. “A small very long-lived tree which becomes gnarled and picturesque with age. Dark-green heart-shaped leaves and dark purplish-red edible fruits. Native to west Asia but has been grown in Britain since about 1500. Often found in quadrangles and college gardens.” 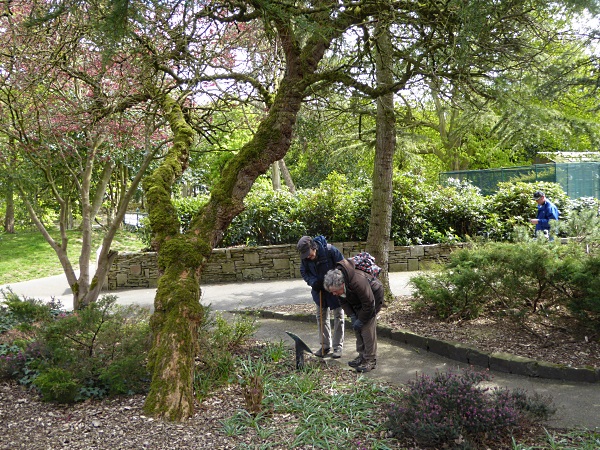 Before we left we shopped for pots of Tulips. They were selling pots of 6 ready-to-flower plants for £2.99 each or two for £5. A bargain!

Public transport details: Bus 47 from Queen Square at 10.10, arriving Preston New Road / Glenpark Drive at 11.25. Returned on the 49 bus at 2.06 from just outside the main entrance of the Botanic Garden, arriving Southport Monument 2.16, in plenty of time for the train at 2.28 back to Liverpool.