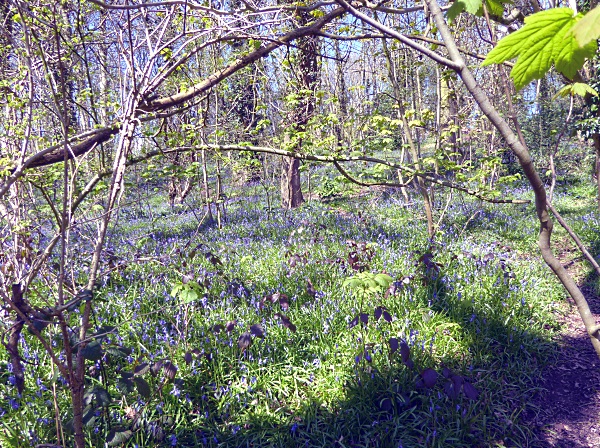 The wayside flowers were out next to the ramp up from Overpool station platform – Dandelion, Red Dead-nettle and Forget-me-Not. The way to Rivacre Valley is north along Overpool Road, first left onto Seymour Drive, and at its western end, just on the curve, there’s a path behind some garages that leads down to the Rivacre Brook. The path then crosses Rossmore Road West then carries on into the Country Park. The northernmost section is a Local Nature Reserve and appears to be ancient woodland, with native bluebells, a few Wood Anemones and carpets of Lesser Celandine. 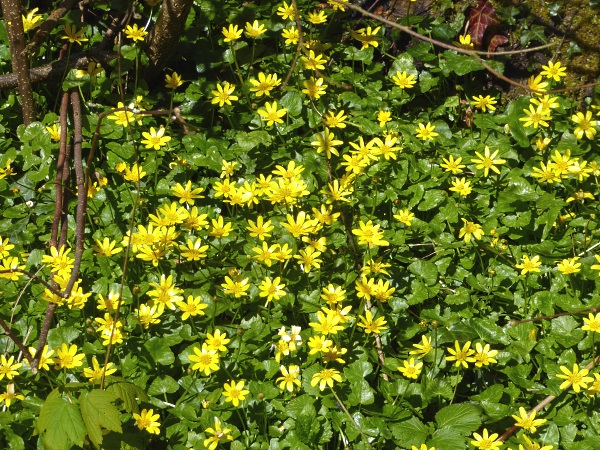 The breaking buds of the trees were showing well in the bright sunshine. The Weeping Willows were  greening, the Horse Chestnut leaves are out and they are about to flower. The Ashes show no sign of coming out, but the Oak buds are starting to break. Does that herald a dry summer? “Oak before Ash, only a splash”. The Norway Maple trees have their acid-yellow flower tufts out, with some leaves following. 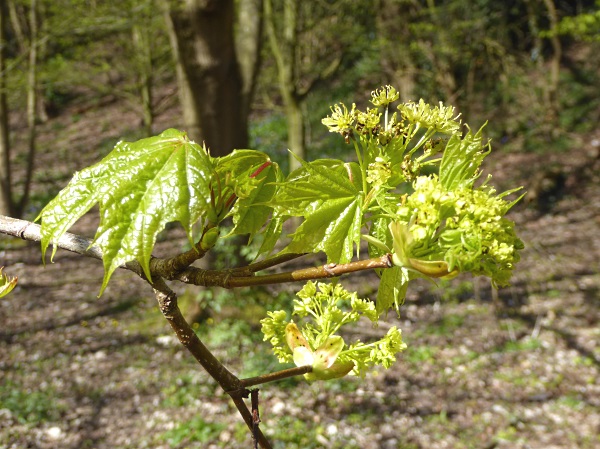 Birds included Starlings and House Sparrows along the houses, a Robin by the station, several Chiffchaffs calling, a Song Thrush, Magpies, Great Tits, Blue Tits and Long-tailed Tits. We heard two Green Woodpeckers, which seemed to be calling or “yaffling” to each other, and we heard a Great Spotted Woodpecker, too, but it was just as hard to find. Another call was a Nuthatch, also not seen. We did spot a Jay up in a tree, and a Buzzard overhead. There were lots of little bridges going back and forth across the brook, which looked like Kingfisher country. We lingered over them, but no sighting. We met a lady later who said she had seen a Kingfisher very early that morning, but they probably hide away as soon as it gets busier. On a green lawn was Corpse of the Day, a dead Wood Pigeon, clearly the prey of an early-rising Sparrowhawk. It had started to pluck it, but must have been disturbed, because the dead WP was otherwise untouched. Perhaps its owner will come back when most people and dogs have gone. 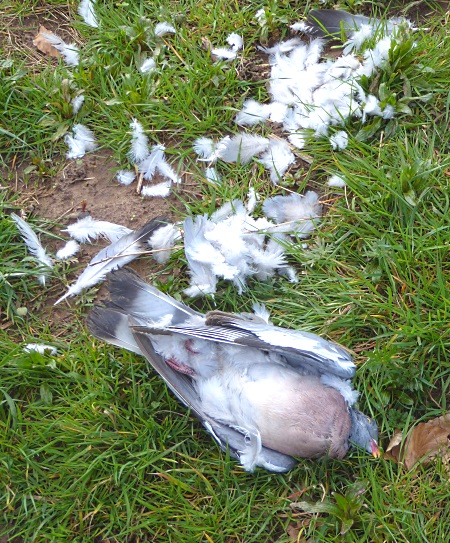 When we first entered the valley, the Bluebells were English or hybrid, but as we went further in they appeared to be mostly native, with droopy stems, flowers just on one side, and white anthers. 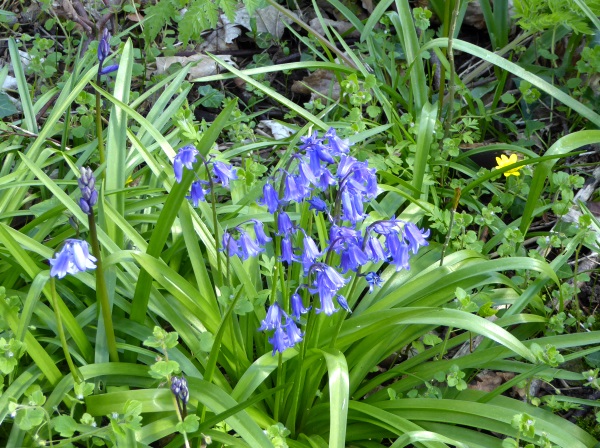 More evidence that the woodland was undisturbed was offered by the patches of Wood Anemones. 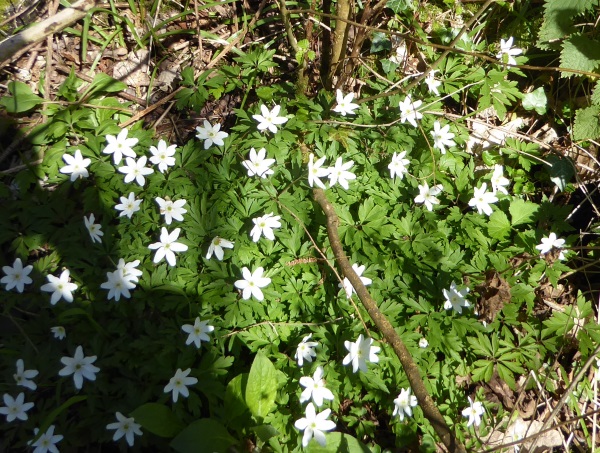 The Willow buds were breaking out, too. Most Willows bear either male or female flowers, according to my book, which surprised me, and this set of “sticky-up” flowers must be females. 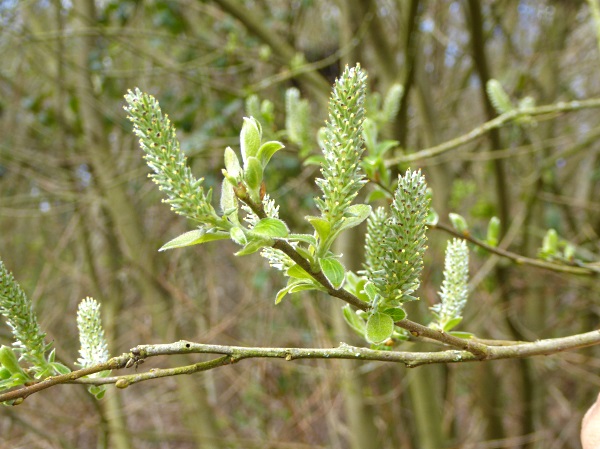 Near the closed Ranger hut there is a pond with small tadpoles, perhaps hatched a week. One Hawthorn was flowering and a bank of Cowslips were out. 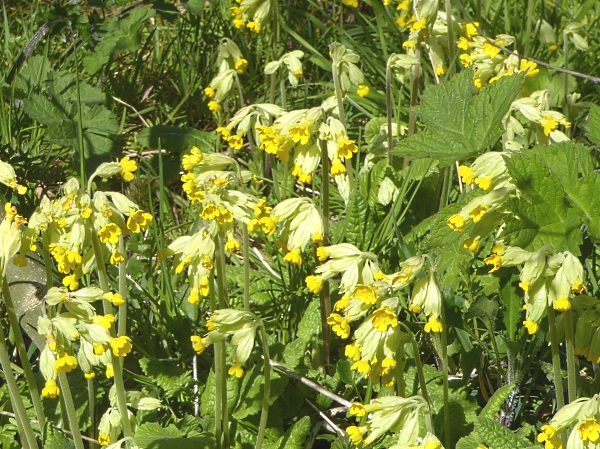 A small stand of Birch trees had their catkins and female flowers out, too. The male catkins hang down, but the females are erect before they are fertilised. 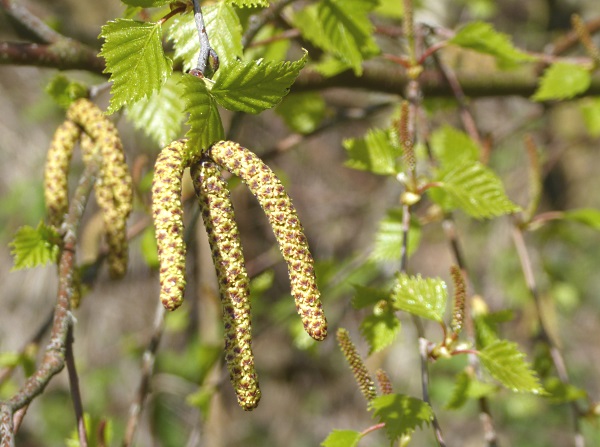 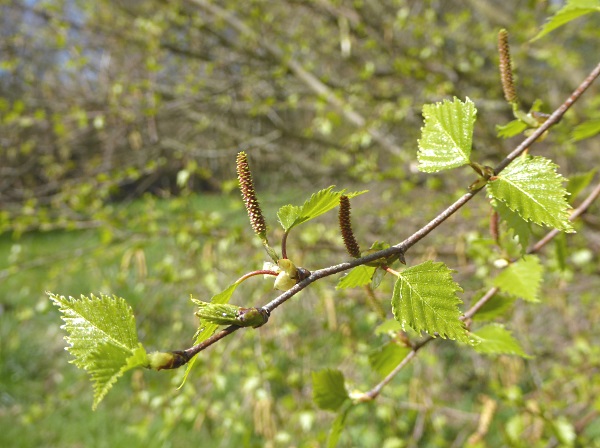 While I was rummaging in the Birch trees, the others saw the Sparrowhawk, but I missed it. Now that the day had well warmed up the butterflies came out. We saw a Peacock, a Small White, several Brimstones on the move and a couple of Commas, one of which sat still long enough to be photographed. 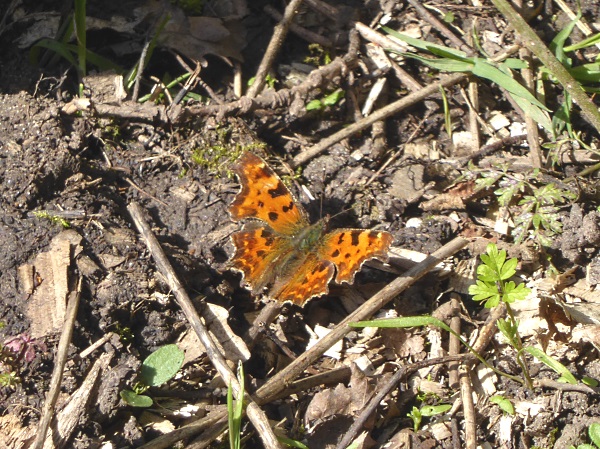 Near the crossing of Rivacre Road there’s a disused tall brick tower called Borewell Station number 2, with one side covered with Ivy. High up there was a nest of a pair of Grey Wagtails. The female was well hidden, sitting in the nest in deep shadow, but the male flitted back and forth in the sunshine. 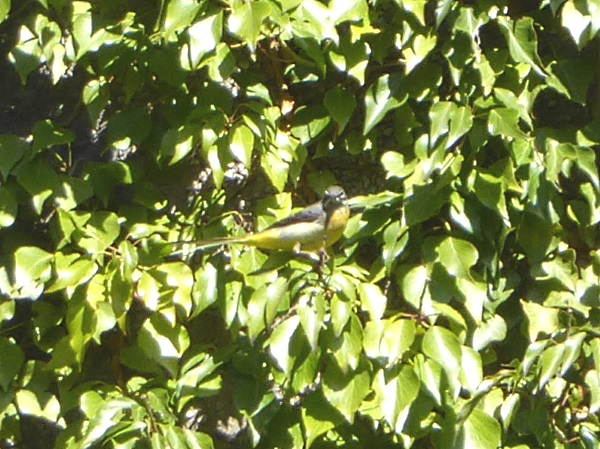 While we were looking for a Mistle Thrush, a dark shape ran swiftly along a high bank. A Fox!  We only saw it briefly but we were all pretty sure it was a fox by the way it ran low with its long brush straight out behind. A Treecreeper was busy along the brook, and also some kind of little brown warbler, showing well, hopping around the branches hanging over the brook. John thought it was too round and chubby to be a Chiffchaff, but there was no other clue. The last birds of the day were two male Bullfinches flashing across a gap in the undergrowth.

Public transport details: Train from Central at 10.30 towards Ellesmere Port, arriving Overpool at 11.02. Returned from Overpool Station at 15.22, arriving Liverpool 15.55