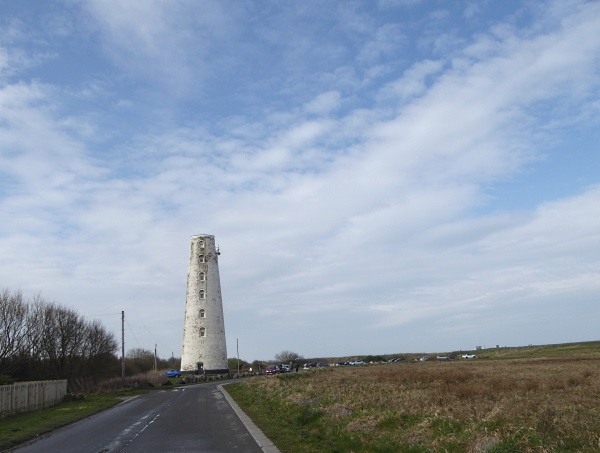 In the Crosby suburbs as I set out my local Weeping Willow was shading from light gold to pale green, although the Weeping Ash outside Saints Peter and Paul church was still bare and grey. Bright yellow Forsythia was well out, new leaves of Privet were budding amongst the old, the Magnolias were almost fully out and the first leaves of Horse Chestnut looked droopy and delicate. 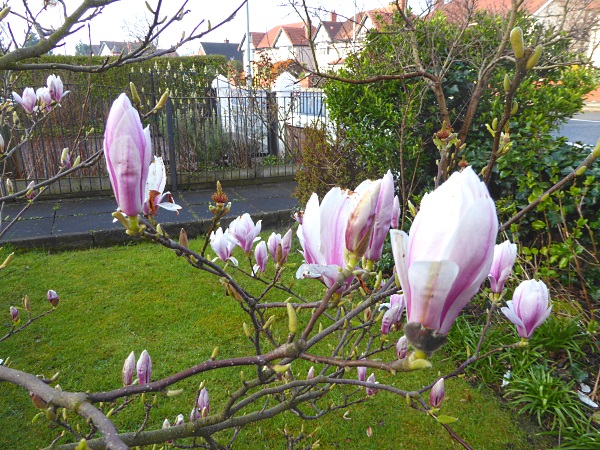 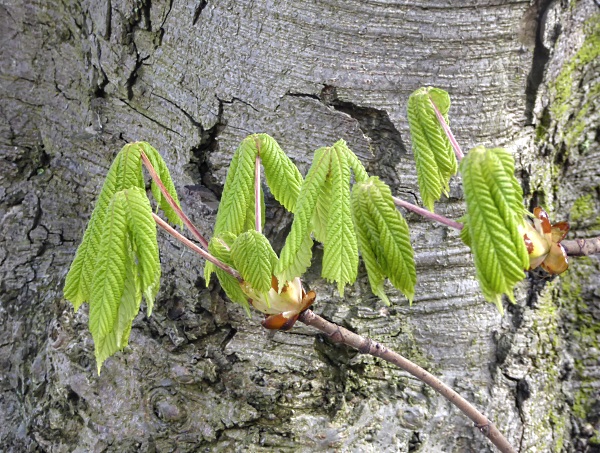 As we walked down Pasture Road past the old Cadbury’s factory there was a big bird high above us, being mobbed by a single Herring Gull. An Osprey! It headed off south-westwards, towards the River Dee and North Wales. What a very good start to the day! Some birders we met later said it was probably the one that had been reported on Hilbre the day before.  We turned into North Wirral Coastal Park along the Birkett. Flowers seen today included Winter Heliotrope (just leaves now), Green Alkanet, lots of  Lesser Celandine still closed up, one very forward Cow Parsley just starting to bloom, Greater Periwinkle, Coltsfoot and Alexanders. 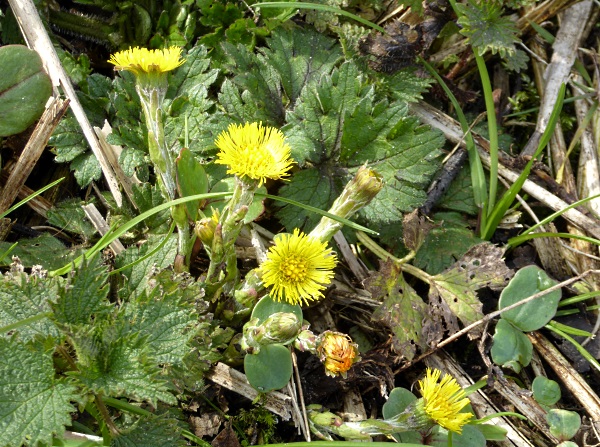 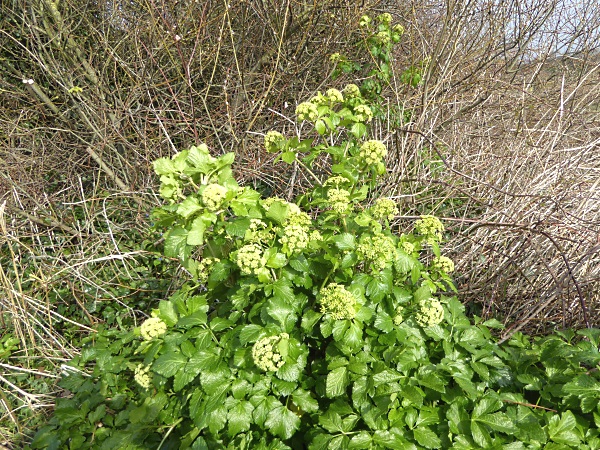 There was a flowering bush that ought to have been Blackthorn, but it wasn’t very thorny. 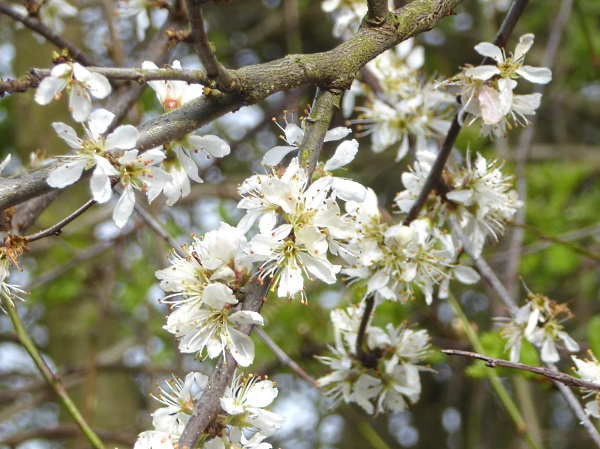 Another flowering shrub was some kind of upright Cherry, definitely not Blackthorn or Hawthorn. 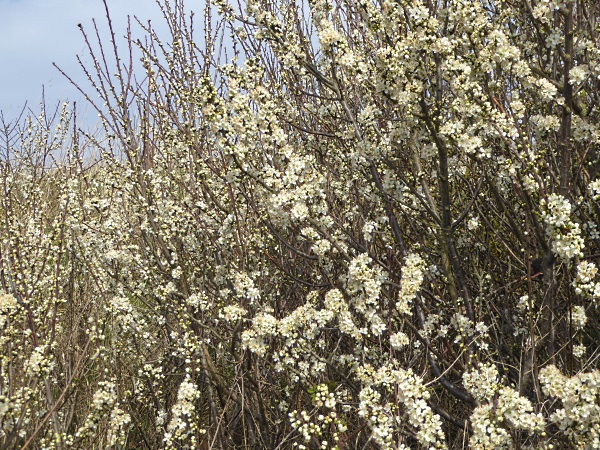 The Hawthorn blossom isn’t out yet, but the older branches are covered in a lichen that was probably  Xanthoria parietina. It has many common names, but I like “maritime sunburst lichen”. 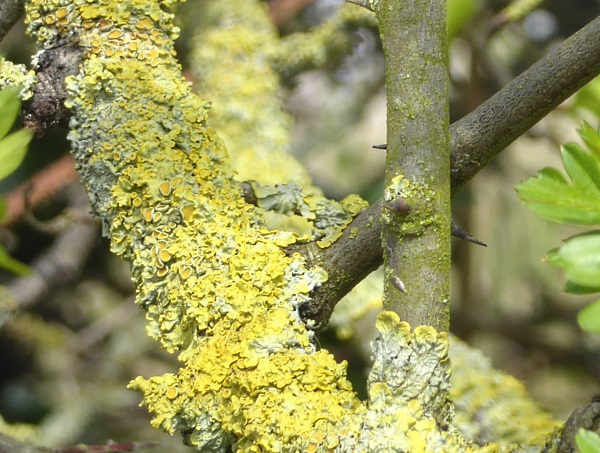 We had heard reports of several Ring Ouzels that had been in the Leasowe area that morning. There were little knots of birders scattered about, concentrating on particular spots, but they all said one HAD been there, but had just flown off. We were really looking for Wheatears, which pass this way at this time of year. We met Barrie B, who said he and his friend had seen several Wheatears that morning, but we had no luck. Towards Lingham Farm there are plenty of House Sparrows. In the hedgerows and around the farm buildings were Collared Dove, Wren, a Dunnock singing high up, Goldfinches and a Robin. There was a black bird on the Birkett. Was it the Ring Ouzel? No, just a Blackbird. At Lingmere Fishery there were only a pair of  Canada Geese and a single Lesser Black-backed Gull.  Near the pond we saw a little brown job hopping around the lower branches of a tree. A Willow Warbler or a Chiffchaff? John whistled the Chiffchaff’s call  to it and it responded with the same notes, so it was definitely a Chiffchaff.  A broken Elder branch bore a cluster of Judas Ear fungus. 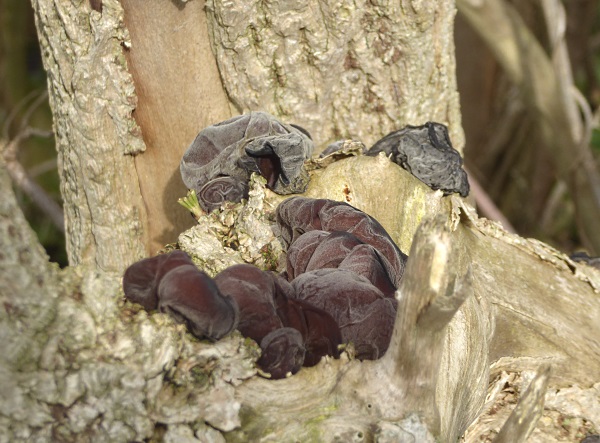 We lunched overlooking the beach, with a Skylark singing overhead. There were two or three Little Egrets fishing, as well as Shelduck, Redshank and Oystercatchers. 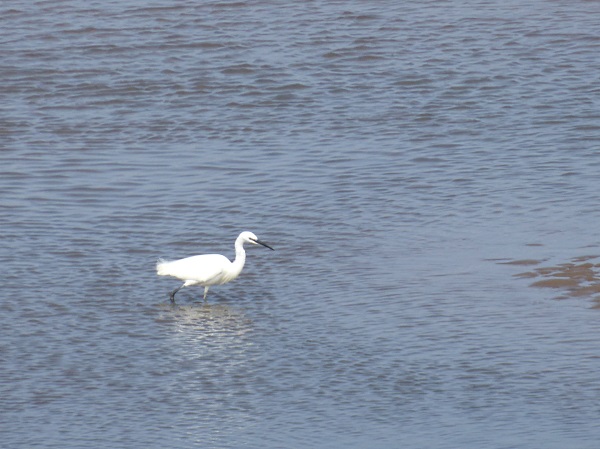 Then we walked westwards along the grassy bank overlooking the beach. A Kestrel was hovering and we heard a Cock Pheasant but didn’t see him. I love the colours of the yellow sand and the blue sea reflecting the sky, shading out to a darker blue in the distance near the wind farms.

Then up the Bridleway into the horse fields then returned along the single-file path towards the Lighthouse. The hedges held Great Tits, Greenfinches, Goldfinches and Long-tailed Tits. Red Dead-nettle was flowering, as well as one small clump of Red Campion. One of the paddocks held a flock of Linnets, and a single white butterfly flew in the distance, probably a Small White. We headed back past the Lighthouse, still looking for Wheatears, and in the field opposite we found a pair of Stonechats perching up on grasses and bushes, then dipping down into cover. This is the female. 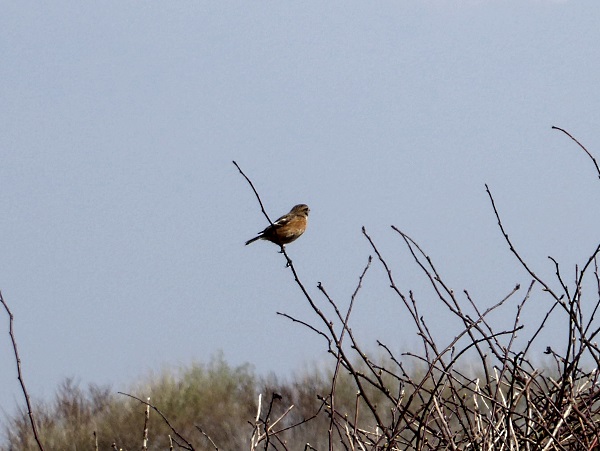 I saw what I thought might have been a Wheatear in the bushes near Pasture Road, but nobody else could see it, so that will have to be a “maybe”  Then back up towards Moreton, noting a clump of Speedwell in bloom by the factory railings. There was an unexpected setback at the station. Following an incident on the line at Hoylake, all trains were suspended, so we had an unplanned walk up to Moreton Cross and a long “scenic” bus journey around obscure parts of the Wirral to get to Birkenhead bus station, then a bus back to Liverpool.

Public Transport details: West Kirby train from Central Station at 10.05, arriving Moreton at 10.25. We should have got the 2.41 train from Moreton, arriving Liverpool 3.05, but the trains were suspended. Got the 423 bus at Moreton Cross / Hoylake Road at 2.58, arriving Birkenhead Bus Station at 3.40, then the 437 at 3.45, arriving Liverpool Whitechapel at 3.55. In retrospect, we probably should have got the same number bus in the opposite direction, which takes nearly as long, but goes all the way to Liverpool.