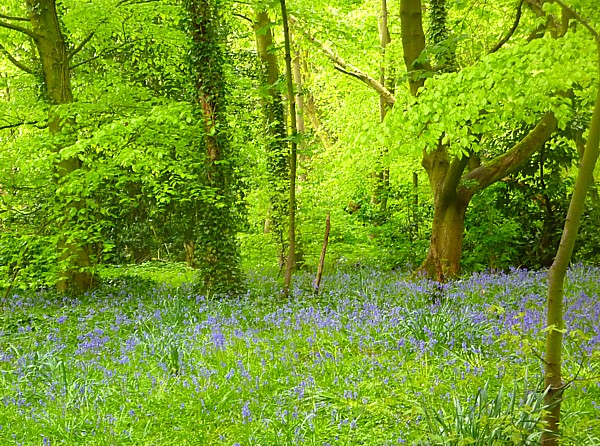 The day started out bright and sunny, with a temperature of 15°C (59°F) at Bootle North Park as early as  9.15. Flower-spotting started as we got off the bus, with a mass of Clover and Common Vetch growing untidily at the base of a bollard and Dandelions, Ribwort Plantain, Nettles and last year’s dried-out Barley stalks growing on a piece of rough ground. As we walked along Stopgate Lane a lady came out of her house and scattered bread on the grass verge, which attracted a large flock of Starlings. After 10 mins walk we came to Everton Cemetery. Along the pavement edges we noted Herb Robert, and in the hedge was our first good show of Hawthorn (May) blossom. The Holly was blooming, too. 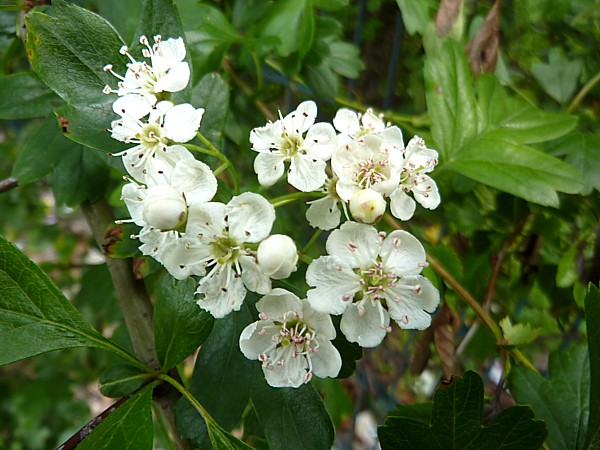 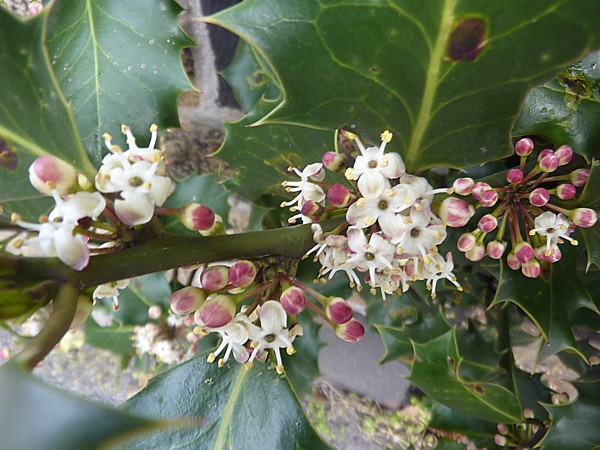 Inside the cemetery we noted a Rook, a Chaffinch and a Grey Squirrel. There’s a Hillsborough grave here, of a young man called Peter Tootle. We marvelled at the very large and ornate Chinese gravestones, and wondered why so many of them had two or three oranges left as offerings. Apparently it’s traditional in Chinese culture to leave food for the afterlife, and oranges are favoured as they are a symbol of good fortune. 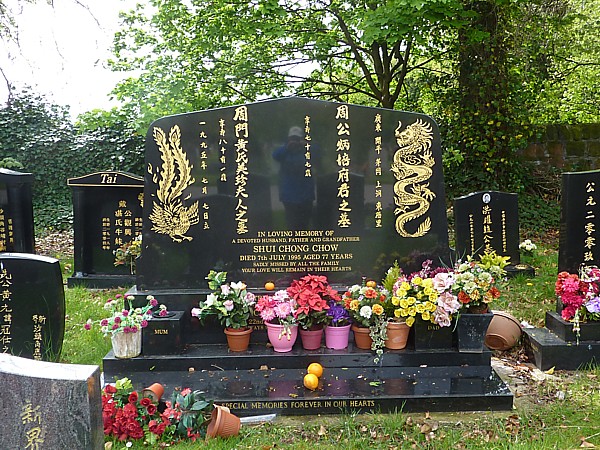 A Maple tree was sprouting brilliant red new shoots from its base. 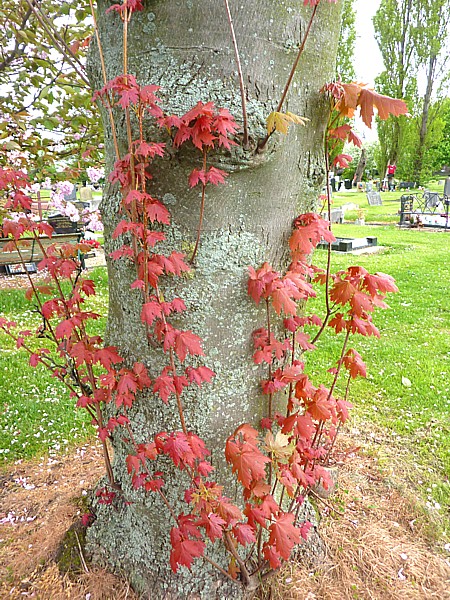 At the far northern end of the Cemetery, in a quiet corner, there’s an obelisk marking the re-burial place of remains from three old City-centre churches, which were moved here when the sites were redeveloped around 1900. Near the lodge a Clematis has found its way onto a telephone wire and got a bit out of control. 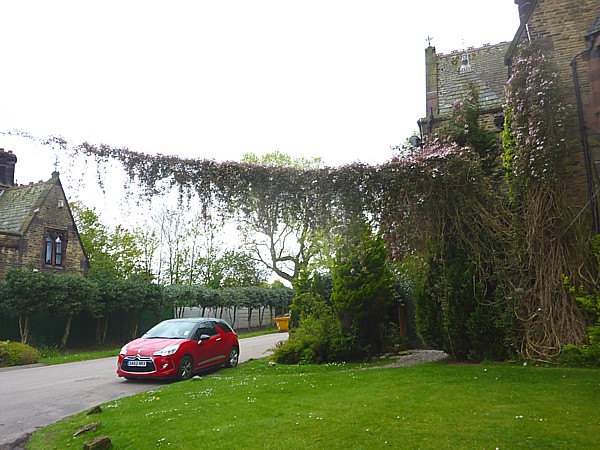 We left the cemetery by the back way, crossed Brookfield Drive and went into Higher Lane and so into the woods. They lie between Altcourse Prison and Aintree (Fazakerley) Hospital and are part of the NHS forest.   There was Cow Parsley coming out along the roadside and Red Campion in sunny glades. There is a Friends group which seems to have been doing a lot of work recently, re-laying the paths. See the PARTIA blog, although it doesn’t seem to have been updated recently.

Lunch was taken in a shady glade whilst sitting on a fallen tree and listening to a Chiffchaff. Afterwards I had a look at this Pine, probably a Scots Pine, with a female flower and an older cone. 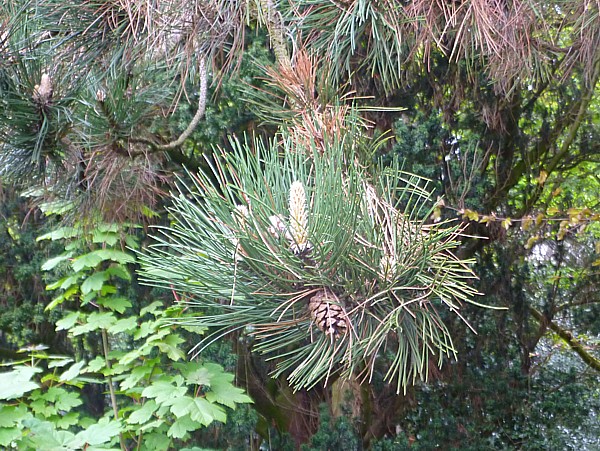 The Bluebells in the woods are hybrids, but they seem to have quite a lot of native in them – many were quite delicate, with flowers only on one side. 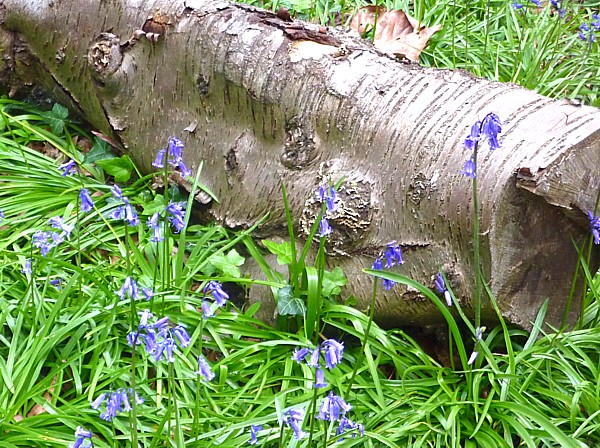 We started uprooting young Himalayan Balsam, but then we found such big patches that we had to give up. Nearby was a pond, full of tadpoles. 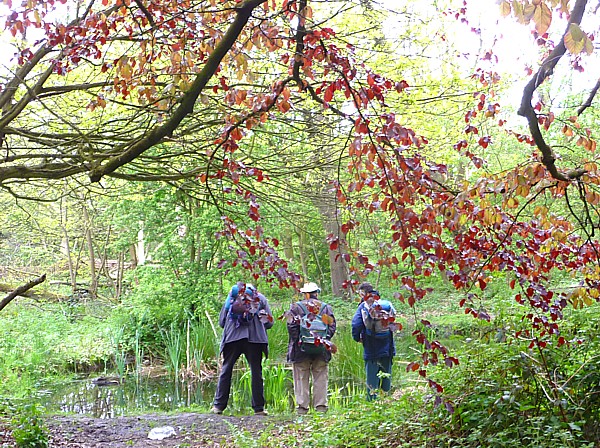 There are several Copper Beech trees in the wood, which look bright red when seen from the right angle, but in close-up, the leaves themselves are only faintly tinged with red. 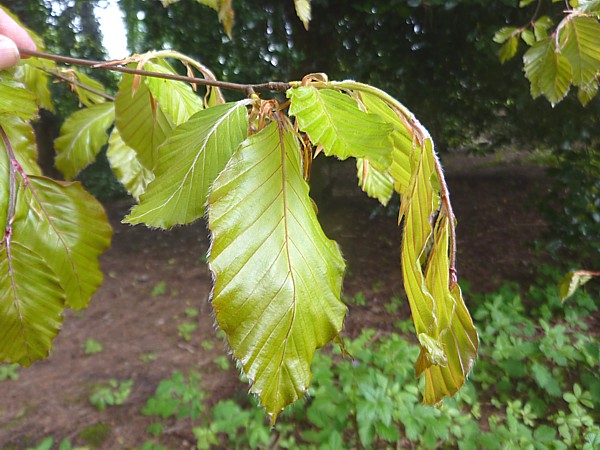 At the edge of the path leading to Lower Lane there were several young oaks with deeply indented leaves, bunches of dangly catkins and red female flowers in some of the leaf axils. They were Turkey Oaks, I think, because English and Sessile Oaks don’t have leaves like this. 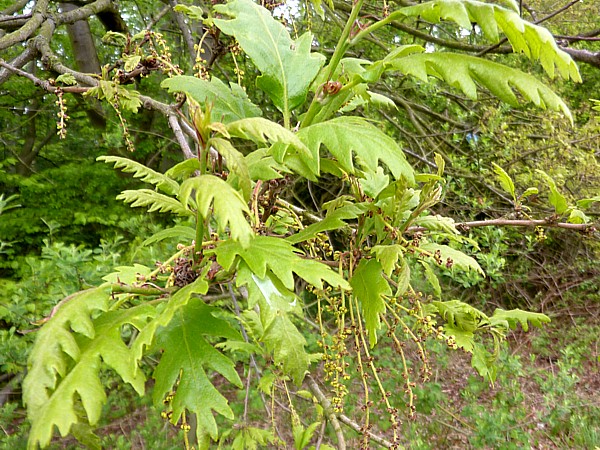 We crossed Lower Lane and took a public footpath leading eastward alongside the Fazakerly Brook. Saw Goldfinch, Blackbird and Long-tailed Tits, and heard another Chiffchaff. The path came out on Copplehouse Lane, and we walked north to Longmoor Lane and the bus home. The houses in the roads joining on the left had purple bins, showing they were in Liverpool, but Copplehouse Lane itself is the southern border of Knowsley.

Extra note: I saw my first Swift over my garden on Saturday 9th May, and by Monday 11th there were three of them.