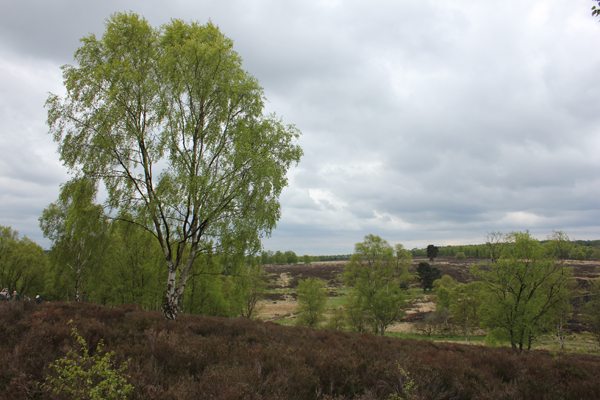 Our last MNA coach trip to Cannock Chase was back in July 2009 so members were eager to return. A Garden Warbler and Willow Warbler burst into song from the car park bushes, heralding our arrival. We had a quick nose around the small visitor centre where a couple of display cases exhibited a taxidermist’s treasure trove of local wildlife including Nightjar, Black Grouse, Fallow Deer, Weasel, Red Fox, Adder, Common Lizard etc. 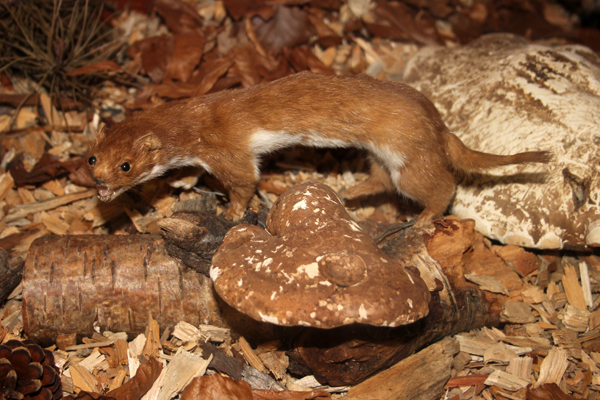 Outside of the visitor centre John Clegg identified an evergreen shrub as Pieris ‘Forest Flame’. A member of the heather family Ericaceae, the young foliage is bright red, becoming pink, cream and finally green. 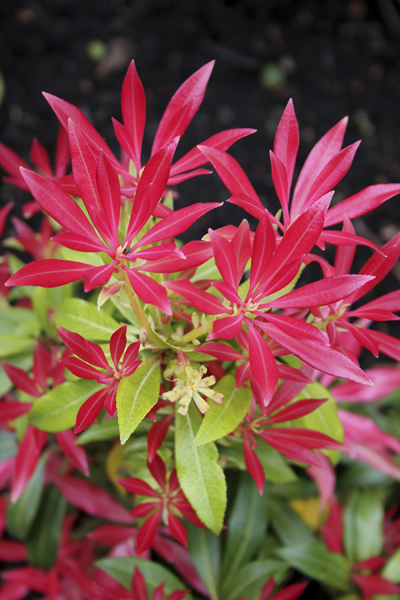 We set off on the blue trail across the heathland. Whitethroat burst into their scratchy song, Willow Warblers uttered their descending notes and a couple of Tree Pipits performed their parachuting aerial display flight. A flock of eleven Crossbills were gathered in a Silver Birch tree busy munching on the late catkins. A new tick for a number of members we cautiously approached closer having fine views of the blood red coloured males and more brownish looking females, the crossed mandibles on their silver beaks also visible. They eventually flew off to another stand of Silver Birches uttering a twittering flight call slightly deeper in tone than that of a Linnet. Cuckoos were calling and we found one perched in a tree below us giving great views – later two were seen in flight.

The heathland was covered in the usual heather and also the low growing scrub with pinkish flowers Bilberry Vaccinium myrtillus which is also known as Whortleberry, Blaeberry and Whimberry depending on which part of the UK you reside. Another scrub with evergreen leaves and pinkish white flowers was identified as Cowberry Vaccinium vitis-idaea. 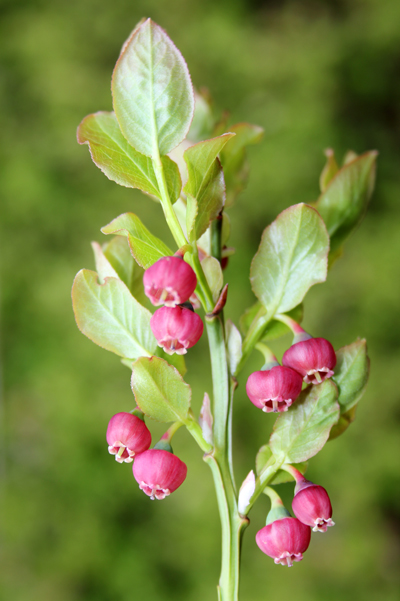 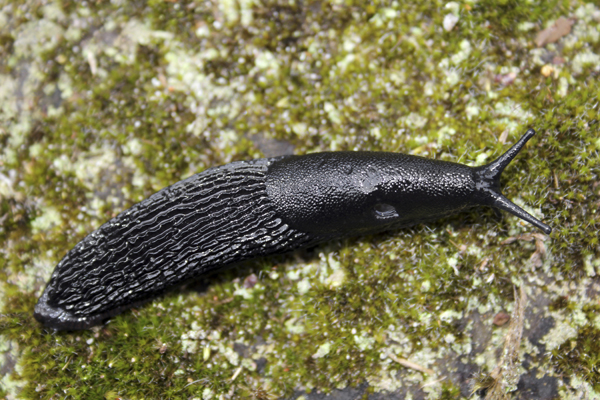 Quite a few Black Slugs Arion ater, one of the brown –form variety were sliming their trails amongst the bushes. Plenty of evidence of Squirrels being around with nibbled pine cones found on tree stumps and other favourite feeding posts. 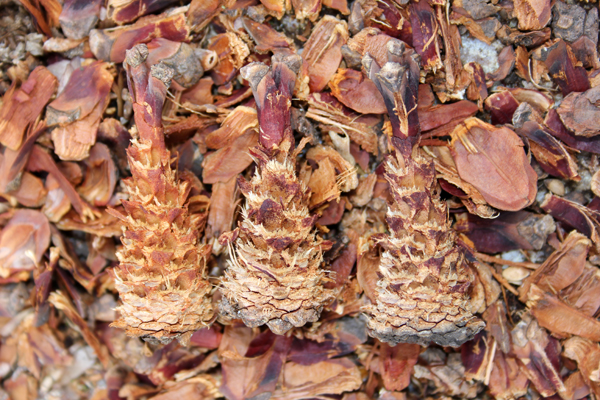 We ate lunch on the edge of woodland where some Alepo Pines Pinus halepensis were beginning to develop new cones. A Green Woodpecker yaffled away which was to be a feature of the rest of the day with approximately eight being heard – a couple of members eventually managed to see one but many didn’t and thought the Green Woodpeckers were mocking us with their laughing call. We entered the woodland – birdlife included Blue Tits, Coal Tits, a few Goldcrests, Chaffinch, Blackcaps, a lone Chiffchaff, Robin and a Wren carrying nesting material. A few Hoverflies were around including Eristalis sp. and they were particularly attracted to the flowering Bay Laurels Laurus nobilis which also attracted a Speckled Wood Pararge aegeria and Small White Pieris rapae. 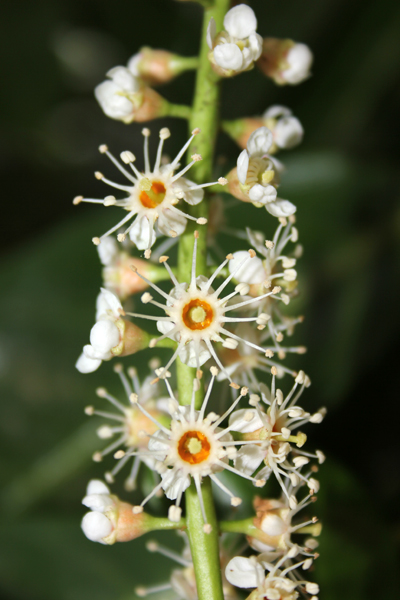 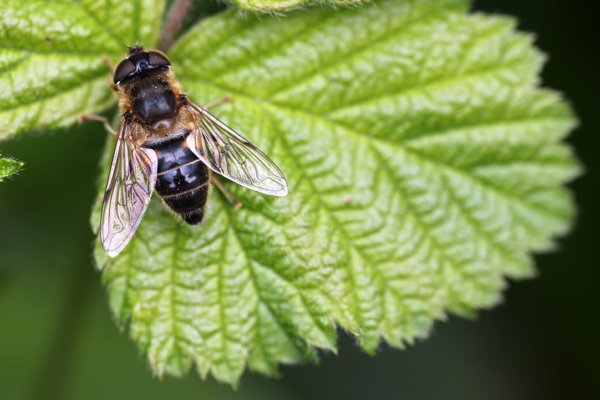 I took a rather poor photo of a Heather Beetle Lochmaea suturalis – in the Leaf Beetle family Chrysomelidae they are only 6 millimetres long and have a tendency to drop into cover if disturbed. 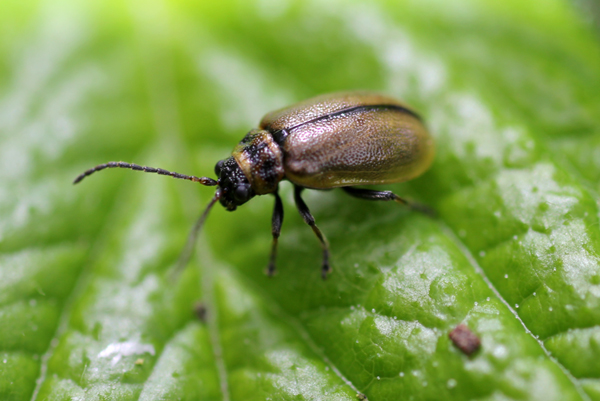 I also noted a few Common Wasps Vespula vulgaris and Nomada Wasps. A couple of Goat Willows Salix caprea were covered in the spiky pistillate (female) flowers, their bark looked as though it had been painted orange due to the carotene containing algae Trentepohlia aurea  and Pixie-cup Lichens Cladonia sp. were also present. The botanists identified a bush of Highclere Holly Ilex x altaclerensis = Ilex aquifolium x perado which originated in the gardens of Highclere Castle, Hampshire, home of the Earls of Carnavon. 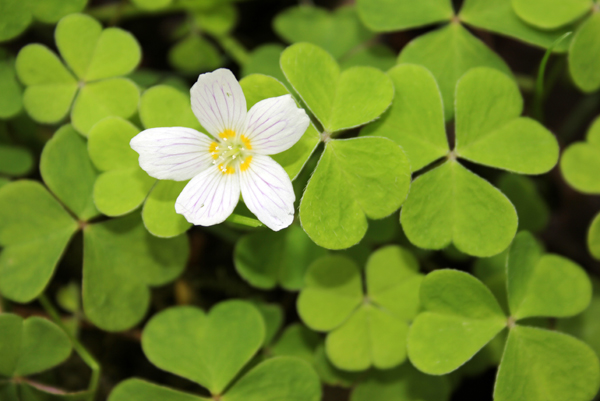 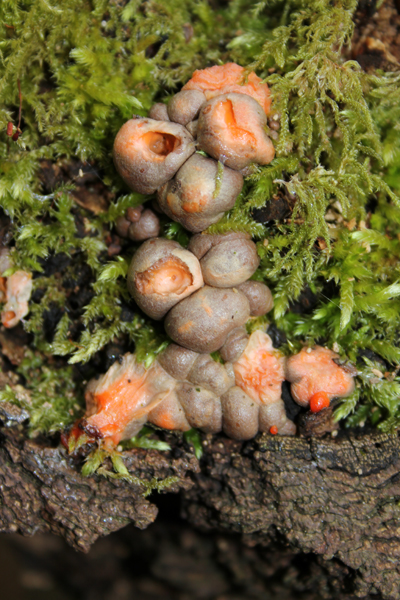 We descended back out onto the heathland where we quickly caught up with another of our target species for the day Green Hairstreak Callophrys rubi, this petite butterfly took off as you walked through the Bilberry scrub but quickly settled, producing a flurry of clicking cameras. 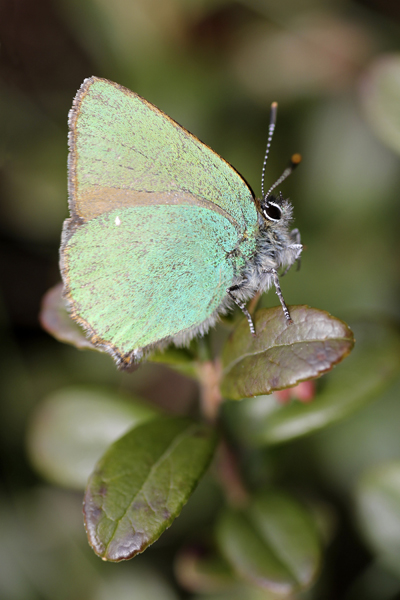 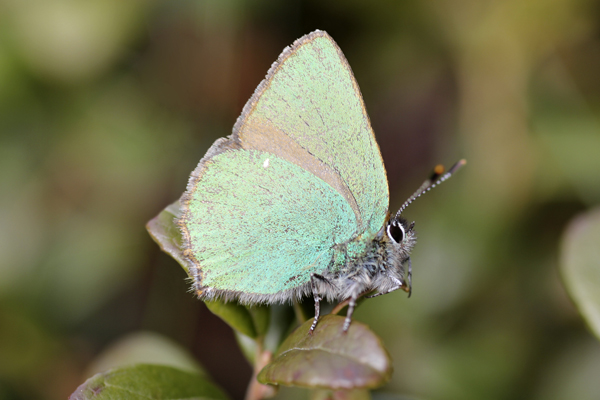 A couple of Peacock butterflies Inachis io were resting out of the wind in a shallow ditch with outstretched wings and a number of brown camouflage heathland Moths flitted around. A couple of male Stonechats were perched amongst the heather and yet more Cuckoos, Green Woodpeckers and Tree Pipits called. One young Oak sapling had a cluster of Oak Marble Galls caused by the Gall Wasp Andricus kollari and on overturning a large fallen tree trunk we found a small Black Millipede Tachypodoiulus niger curled up in a spiral and an unidentified Slug.

All too quickly we were back in the car park where we were to be given a final show from another flock of around ten Crossbills feeding on the cones in a Pine tree. A pair of Swallows was nesting in the ladies toilets 🙂