It was a cool, cloudy morning with a promise of rain from midday. We took the 82A from Liverpool ONE bus station at 10.17, arriving at Hale Village at 11am. Hale is famous for the 16th century giant, John Middleton (1578-1623), known as the Childe of Hale, who was reputed to have been 9 foot 3 inches tall. 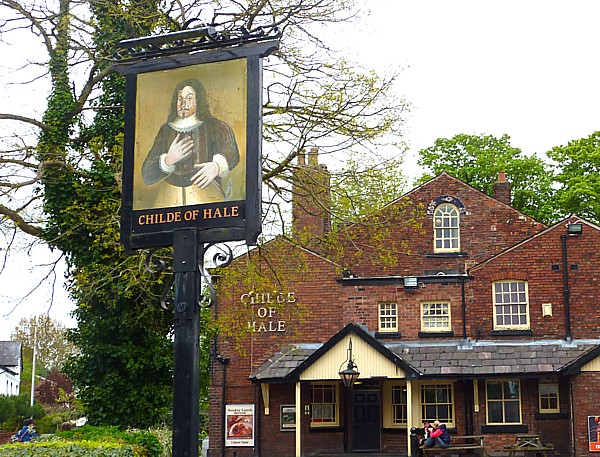 There is a new statue commemorating him, replacing the old wood carving. It seems they have made it oversized, because it’s about 11 feet tall. It’s too well-proportioned to be convincing as well, just an enlarged version of an ordinary-shaped man. 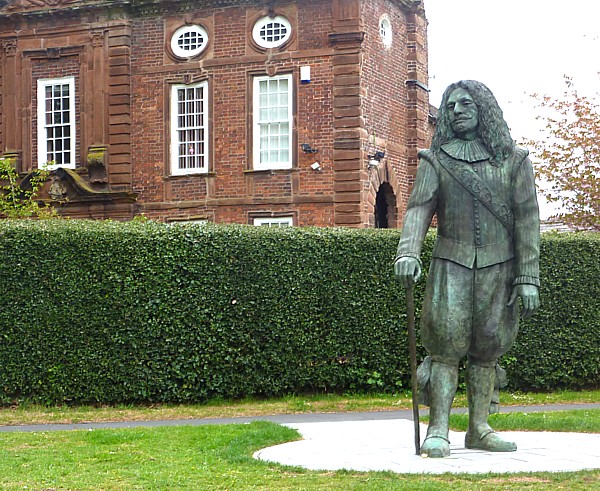 His cottage is marked with a plaque. 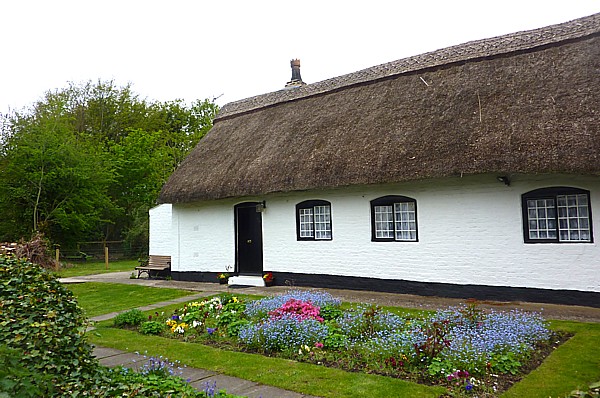 John reckoned the two little windows on the gable end are where his feet used to stick out when he was in bed! 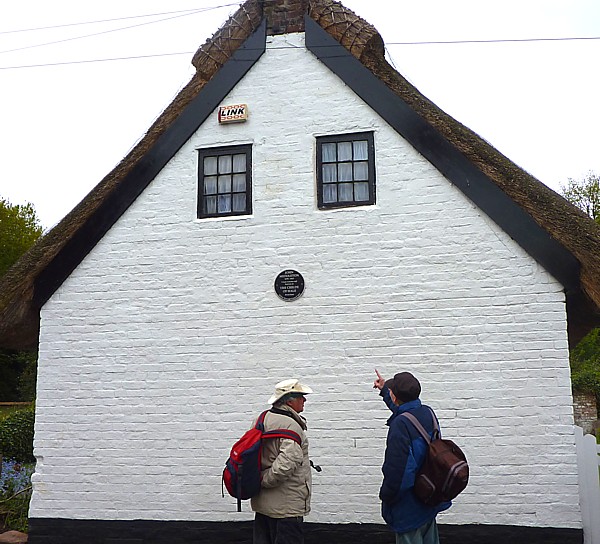 His grave is in the churchyard, with the inscription
HERE LYETH THE BODIE OF JOHN MIDDLETON NINE FEET THREE BORNE  1578 DYEDE 1623 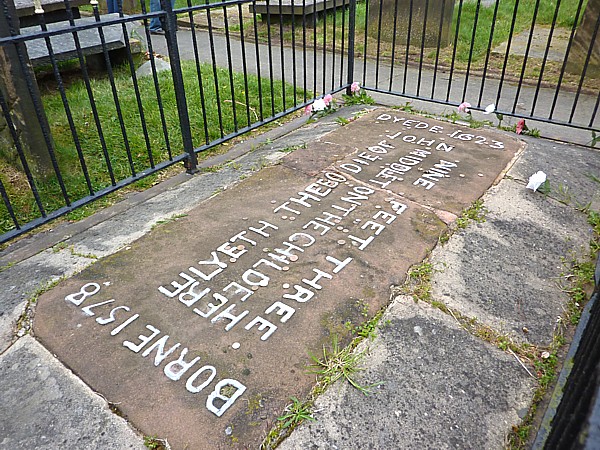 My great-grandfather was fascinated by the legend, and in the 1920s wrote a long doggerel poem about the Childe, full of mock-Jacobean words. It begins
Now I’ll tell you a norrible tale
About the man called Childe of Hale
He was a very famous wight,
John Middleton he hight
Who grew right up to nine foot three.
I should not like to be so tall,
For see how far I’d have to fall.

But my great grandfather, who lived in smoky Everton and who had been a chimney sweep for most of his life, certainly appreciated the clean country air at Hale, and ended his poem thus.
I hope that I may be forgiven,
But Hale must be all right to live in.
‘Tis open land and near the Sea,
As like to Eden as may be,
With lots of grass and flowers and trees.
Enough, I hope, of bread and cheese
(Good, eaten in a healthy breeze).
Here people need not fear they’ll choke,
Not even if their chimneys smoke.
No wonder they’re a long lived folk.

From the back of the churchyard we saw a male Pheasant, a Magpie and a Wood Pigeon. Down Church Road we noted a Blackbird and a Greenfinch perched together on a TV aerial and House Sparrows in a hedge. The gardens had pink cherry blossom and a golden Maple shrub. 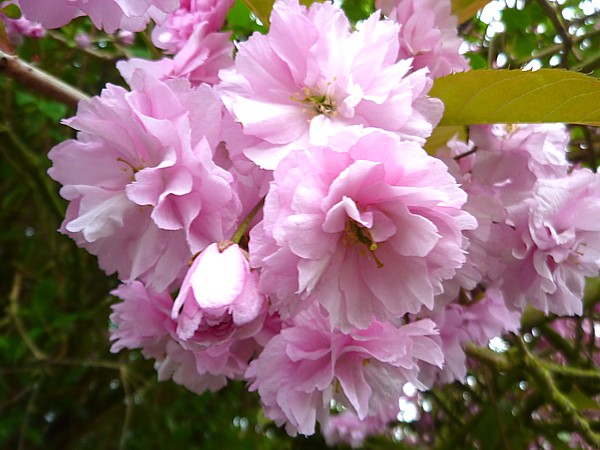 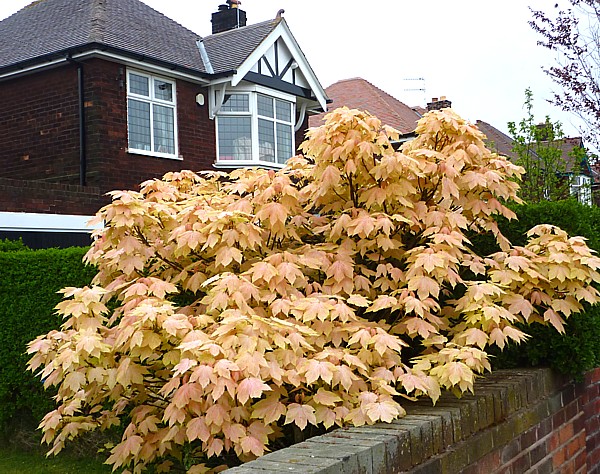 Swallows skimmed over the fields, and Rooks and Carrion Crows foraged busily in the ploughsoil, perhaps eating the farmer’s seeds. The path down to the lighthouse ran between a great expanse of oil-seed rape in full bloom, which was a dazzling sunshine yellow on a dull day. There weren’t many spring flowers out. Apart from the masses of Dandelions, some Red Dead-Nettle, and the early Cow Parsley, I saw only one Garlic Mustard (Jack-by-the-Hedge) in flower. The Hawthorn (May) blossom isn’t out yet either, and there don’t seem to be very many buds on the bushes. 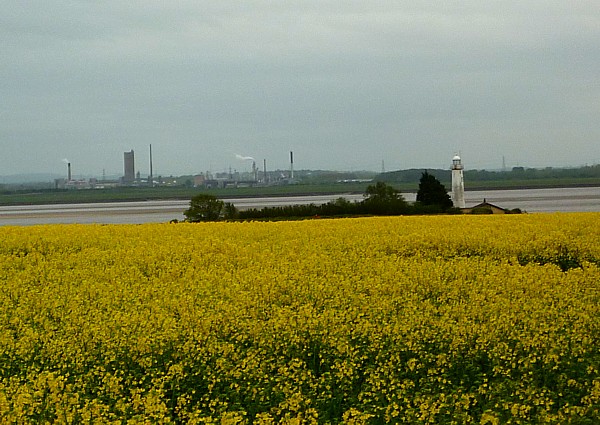 As we approached Hale Head the cloud thickened and the brisk breeze gusting off the river carried spots of rain. John’s plan to lunch on the rocks below the lighthouse had to be abandoned.  Seeking shelter, we followed the cliff path westward, disturbing a Meadow Pipit on the edge, and spotting a Reed Bunting diving down into the sea of yellowness on our right. We eventually settled into a small copse of Beech trees. 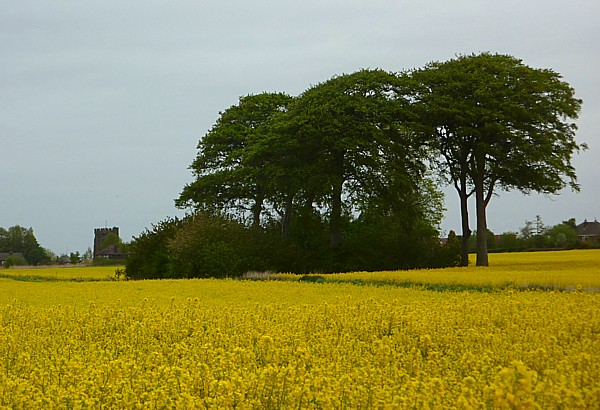 There must have been at least one Oak, though, because we found several of last year’s fallen Oak Marble Galls, each about the size of a Malteser. They are caused by the Gall Wasp Andricus kollari, whose egg distorts the Oak leaf buds. On the picture below you can see the small hole where the young wasp emerged. 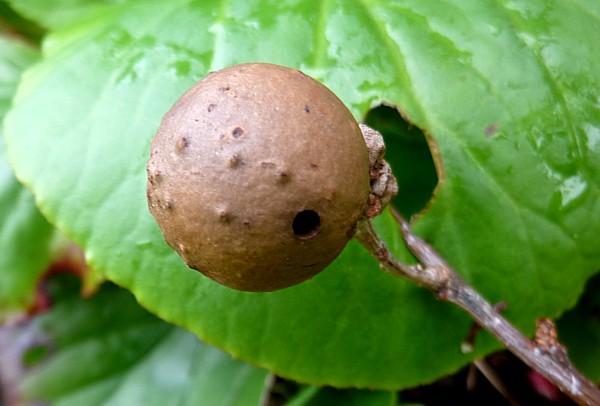 We headed back towards the village and into the woods around Hale Hall. They don’t seem to be ancient woodlands. There were a few clumps of Bluebells, but they seemed to be mixed patches of blue, pink and white Spanish bluebells, probably planted in the last few decades. The ground cover was almost all made up of tiny heart-shaped leaves, possibly one of the Violets, but I didn’t see any of it in flower. In the park, on the way back to the village in the steady drizzle, we saw a Song Thrush poking about on the lawns and there were also some fresh molehills. We were back in the village in time for the 82A back to Liverpool at about 2pm.

I have been reading the Eat Weeds website which has inspired me to gather the one flower shoot of Garlic Mustard that I saw, plus two or three leaves and flowers from a small patch of Ramsons in the woods. I plan some garlicky scrambled eggs!