The winter may be over, but spring still hasn’t properly arrived. It was cool today, with a weak sun, but at least not the freezing weather that we’ve had for so long. We took the 487 bus from Sir Thomas Street to the lovely village of Thornton Hough, where scarecrows are everywhere. 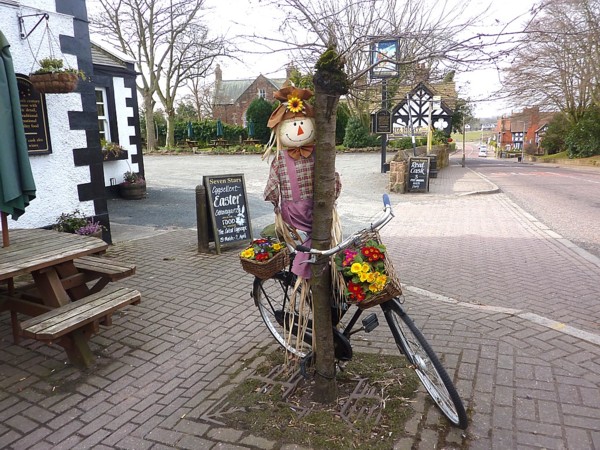 The trees are still almost completely bare but in the gardens on the way we enjoyed the sight of daffodils, Forsythia and some early blossom trees. Another “spot” from the bus was the first of many Hares in the ploughed field on the corner of Clatterbridge Road and Thornton Common Road. We walked out of the village and left the road at Croft Bank Cottages. As we turned into the fields Vee saw a molehill move! We stopped and stared at it for a bit, but there was no more heaving activity. But the young moles must be on the move now the ground has thawed. We did note the clumps of late snowdrops, which are just going over. 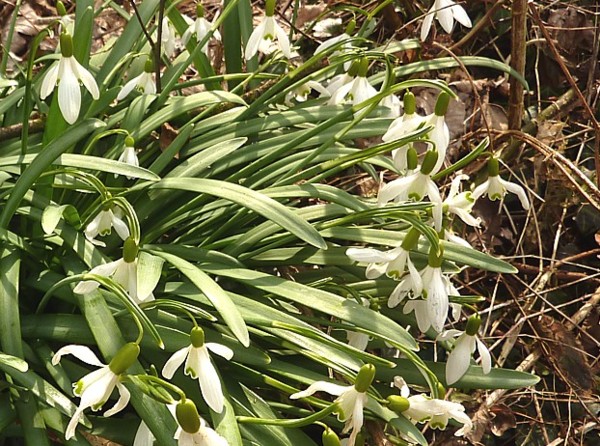 Birds included Crows and Jackdaws in the fields, a Yellowhammer in a hedge, a Skylark singing, a Mallard flying, a bright male Kestrel hovering. In the hedges there were Greenfinches, House Sparrows, a Song Thrush, a pair of Robins and a Dunnock. It would have been idyllic but for the pong of fertiliser all day. Somebody had been muck-spreading!  It smelled rather “darker” than the usual dung, with (we joked) hints of caramel and bay-leaf. John hazarded that it might have been chicken manure. We stopped for lunch at a path junction where there was a piece of rusting farm machinery. An olde mucke-spreader? No, it was an ancient rusty seed sower. 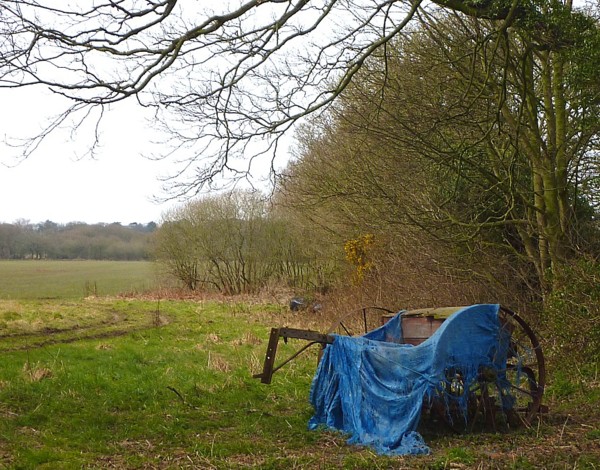 In the rough grass on that corner there were lots of little burrow openings, each between ¾ inch (2 cm) and 1½ inches (4 cm) wide, leading to shallow burrows in the topmost soil layer. The long grass was neatly cut off around the mouths of the holes, but surprisingly, none seemed to go in further than about three or four inches (9 cm). We had lots of fun probing them with twigs, but they were all “blind”. I am guessing they were made by Bank Voles, but have no idea why there were so many that didn’t go anywhere. Just daytime hideouts?  [Edit 15th April 2013.  Chris Butterworth has suggested they were made by Field Voles, and what we saw were the ends of longer burrows made under snow, which have now melted away. Sounds highly likely.] 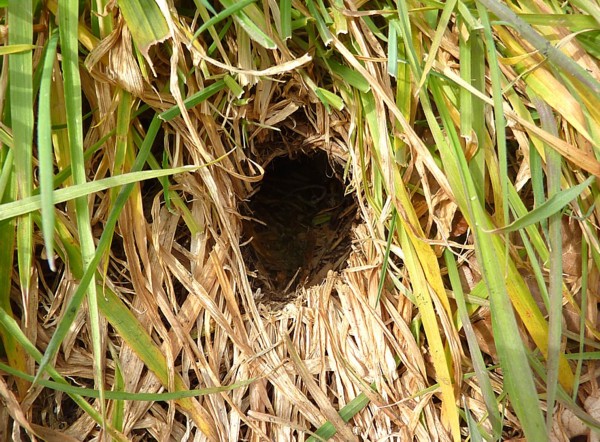 The Lever Causeway is an old carriage drive leading to a former home of Lord Leverhulme. We crossed it several times during the day. It was a beautiful grey-green tunnel, looking like something David Hockney would paint. 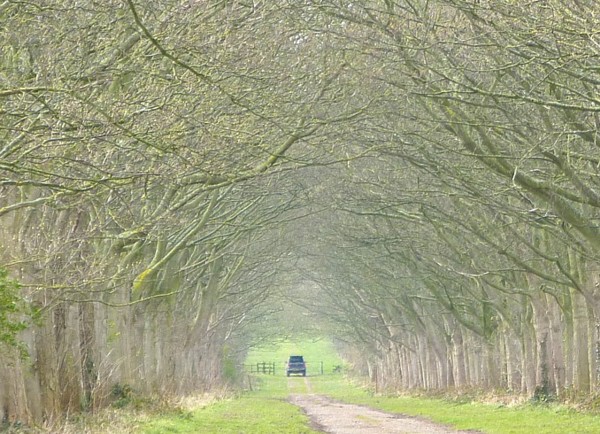 Then we spotted four Hares in a stubble field. They were running about after each other, and we saw two of them boxing. They put on a really good show for us and we were entranced. (You should be able to spot three of them in the picture below, but I know they are a long way off! Two are near each other on the right, looking at a third one further left.) 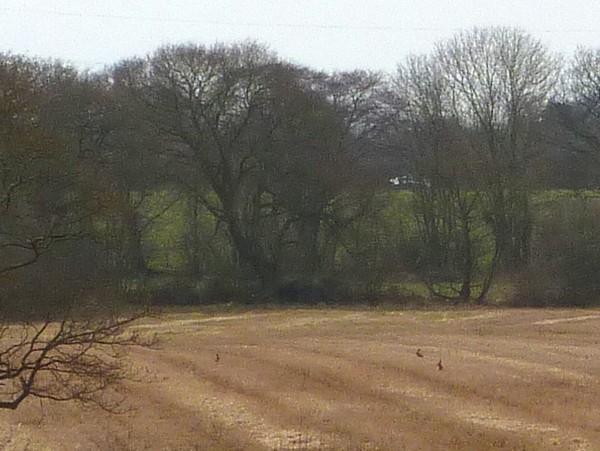 On a Dandelion we saw what looked like a wasp or a honey bee. I think it must have been one of the same Colletes bees the MNA saw yesterday. 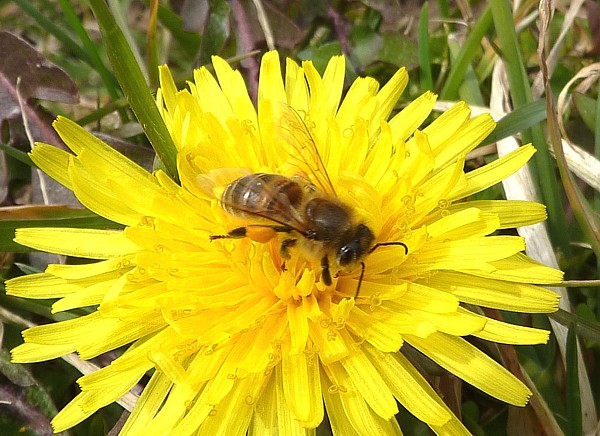 A single Lapwing was stalking about in a ploughed field, perhaps guarding a nest. As we came out of the fields near Brimstage we saw a Red-legged Partridge heading for the cover of a hedge. The steps of the old stile there have been worn by centuries of feet. You can see where the fence used to go, across the middle. 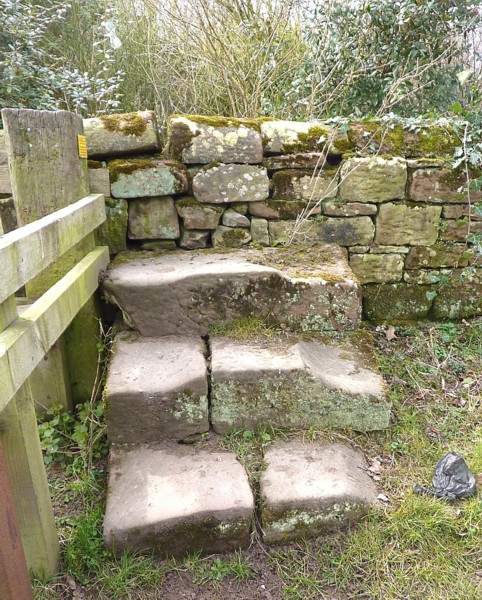 The last time we were at Brimstage was 1st May 2011. We saw hares that day too, and Swallows nesting under the archway. It’s too early for them yet, especially in view of the cold weather. The late spring is causing some odd sights. On a field at the back of Brimstage Courtyard we spotted a Fieldfare in its summer plumage. It isn’t supposed to change until it gets back to its breeding area in Northern Europe. The lengthening days have made it moult but it’s been too cold for it to fly back north. There was another winter visitor too, a Redwing. Then back over the fields to Thornton Hough.  At the Talbot Avenue corner there were even more hares, and we stopped again to watch their antics. They delayed us so long that we missed the hourly bus for Liverpool by a mere four minutes. So we waited for the 87 for Eastham, enjoying the Rooks cawing in the trees. The bus took us to Spital station where we just caught the train for Liverpool.