This was the first of our series of Wirral Circular walks, intended eventually to cover the whole distance from Hooton to Seacombe. 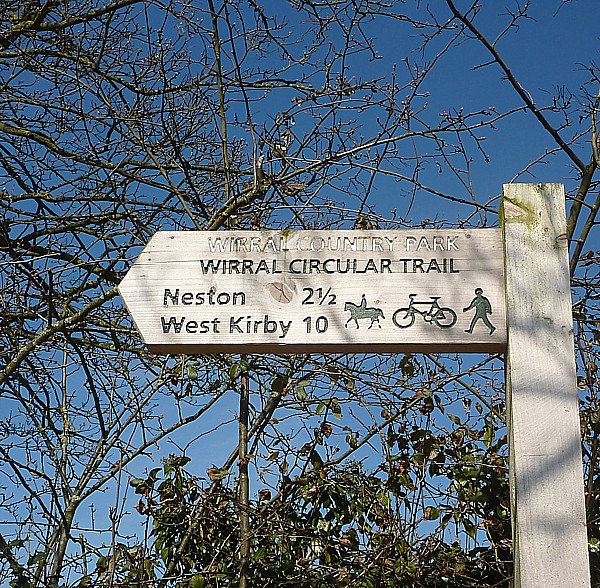 It was Grand National Day and at Moorfields I noticed groups of men in suits, and young women wearing extraordinary hats, all off to Aintree and all clearly unfamiliar with public transport. It was a clear sunny day with light wind, just starting to warm up after the long freeze. Eighteen members and visitors met at Hooton station and set off along the Wirral Way. 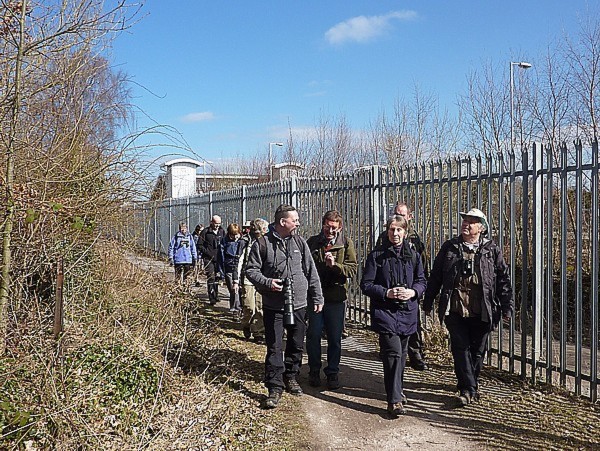 Our first flowers were Coltsfoot by the wayside, and our best birds of the day were amongst the first we saw – two female Redpolls feeding on the dead seed heads of Rose Bay Willow Herb by the side of the path. A Chiffchaff was calling high in a tree and darting out from its perch to catch flies. Expert opinion was that it was probably a newly-arrived bird because it was so vocal and active, showing off and establishing a territory. 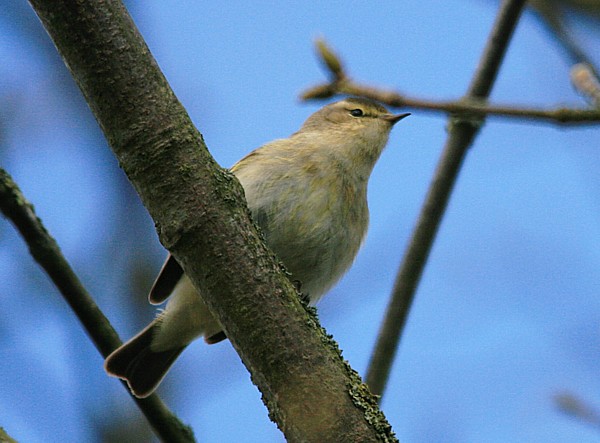 House sparrows chirruped in the hedge and we spotted a two-apartment nest box high up on the gable end of a warehouse. 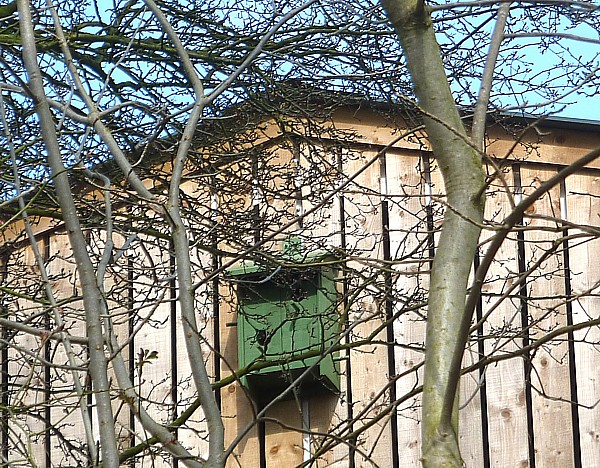 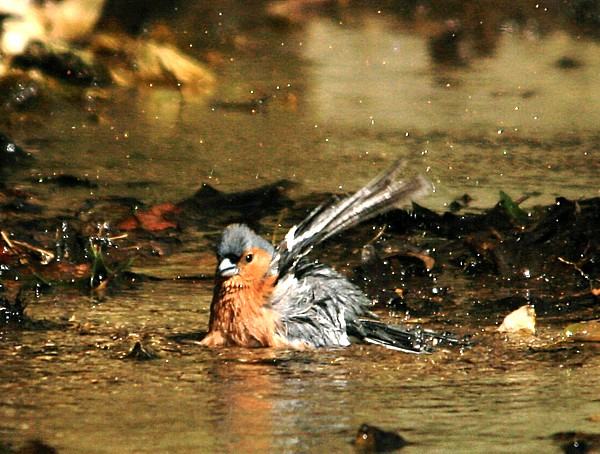 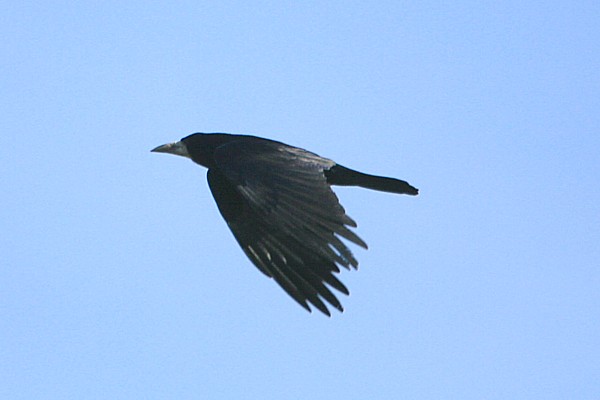 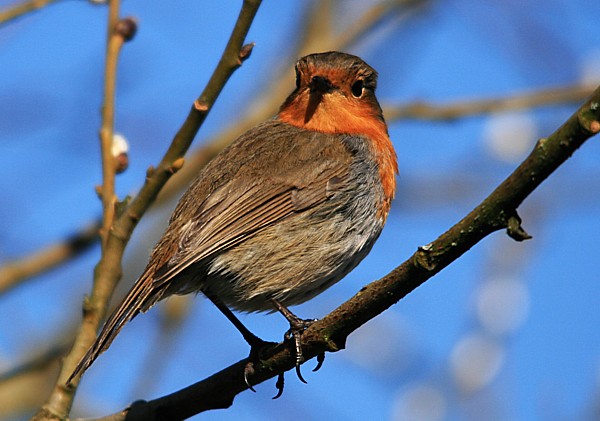 Chris Derri found the track of a Holly leaf miner. I was most impressed when he looked it up on his smartphone and told me it was made by the grub of a fly called Phytomyza ilicis. It is “common across northern parts of the world, and can be found in woodlands, hedgerows, parks and gardens, wherever holly grows.” 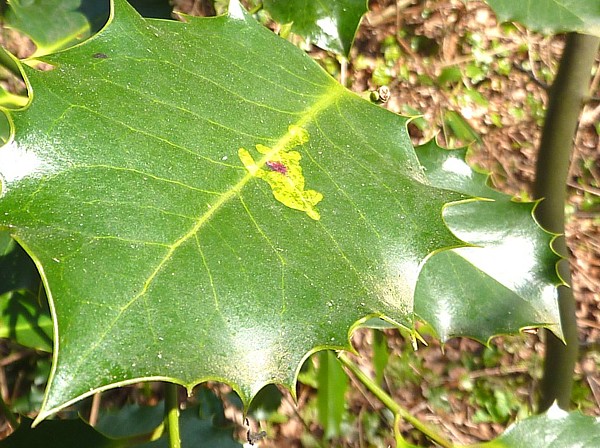 We lunched at Hadlow Road Station. There were lots of people out – cyclists, family parties, a group of young people clutching laminated maps and a party of air cadets. It had turned into such a nice day that some people were wearing short-sleeved T-shirts. 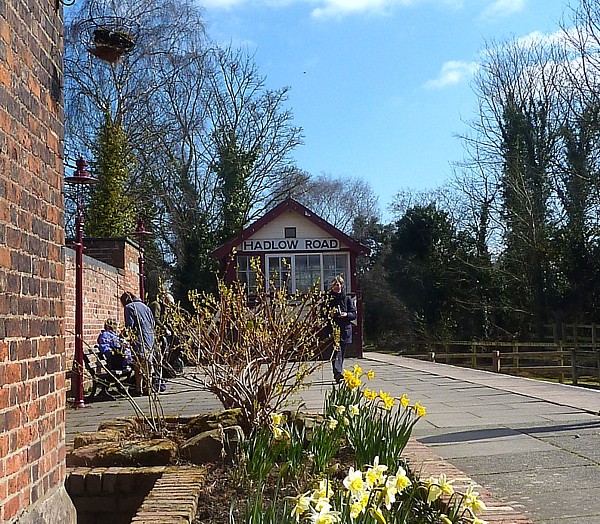 So warm, in fact, that we saw our first butterfly of the year – a Small Tortoiseshell flying high in a Pussy Willow, accompanied by an unidentified hoverfly. It’s about time. The extended cold weather has made some things about a month late.  Chris Derri also spotted a Comma sunning itself. 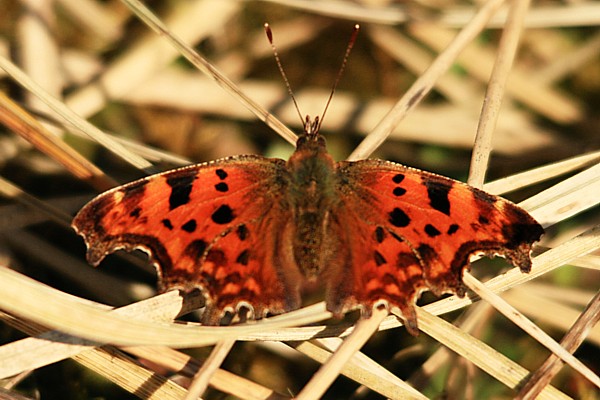 High in the sky a Sparrowhawk was mobbing a Buzzard. On a patch of Lesser Celandine flowers there were what looked like some foraging bees or wasps, but which were said to be of the genus Colletes. Wikipedia says “The genus Colletes (or plasterer bees) is a very large group of ground-nesting bees within the family Colletidae, with over 450 species worldwide.  They build cells in underground nests that are lined with a polyester secretion, earning them the nickname polyester bees.” 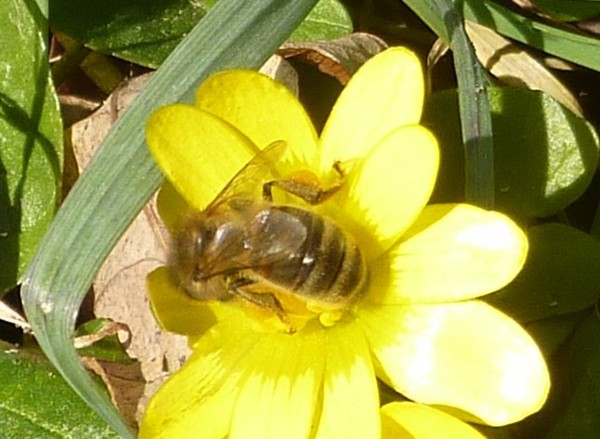 I looked them up on the website of the UK Bees, Wasps and Ants Recording Society (BWARS) and I think they might have been Colletes cunicularius. They say it is the only British Colletes to fly in the spring (early April to the end of May, rarely mid-June), it is known to forage for pollen on Ranunculaceae, the family to which Lesser Celandine belongs and it is known to be present on the Wirral. It has an unusual distribution, “being confined to a number of extensive coastal sand dune systems in north-west England and north-west and south Wales.”

We delighted in the sight of a tiny Goldcrest scurrying about in a bare tree. 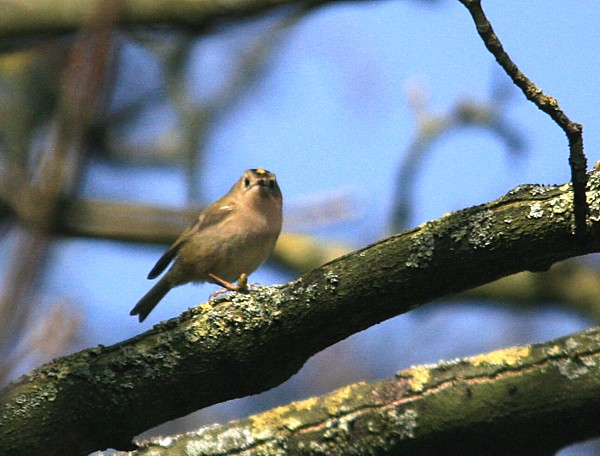 Then Chris Butterworth found a minute ladybird, only about 4mm long. He took it home to ID and confirmed that it was a 24-spot ladybird Subcoccinella 24-punctata, said to be found “in grassland and marshy places where it feeds on plants. It is common in southern England, becoming less so northwards.” 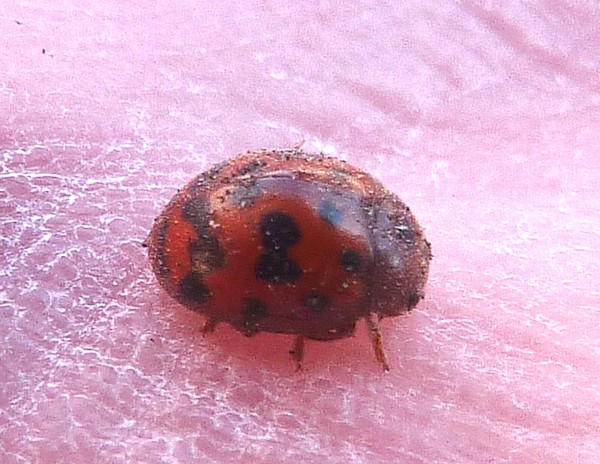 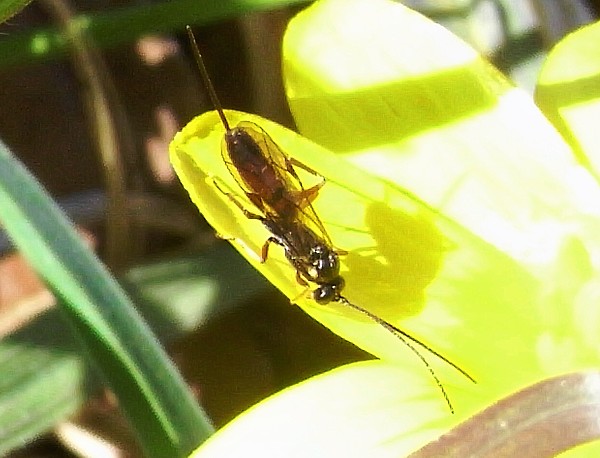 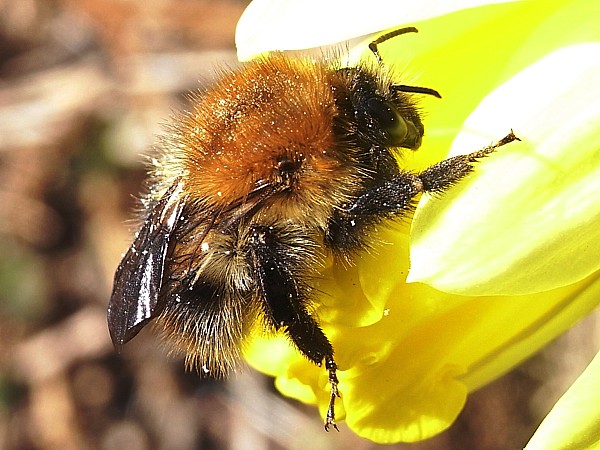 We passed a tree covered in small dark-red flowers, not as showy as cherry or apple blossom. At first we though they might be the female flowers of Alder, but they can’t have been, because Alder has its male catkins on the same tree, and this tree didn’t. These flowers seem bigger than the female flowers of Alder, too. Anyone know what they are? (Added 24th April – identified by Pat Lockwood as the Wych Elm, Ulmus glabra. Thanks, Pat.) 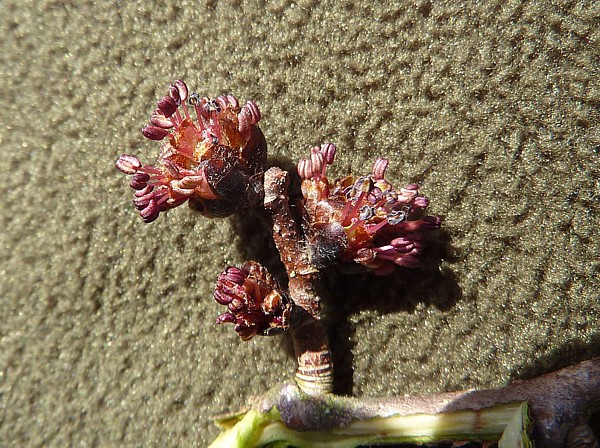 In the cutting the sandstone walls showed a text-book example of “convoluted folding” of the sandstone and a formation that John tried to persuade me was a fossil dinosaur. (It isn’t really! But imagine a side view with an upward curling tail at the right and the head at the left). 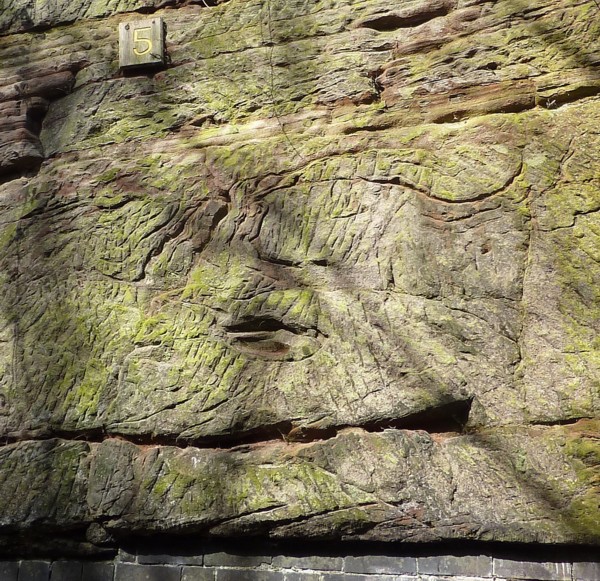 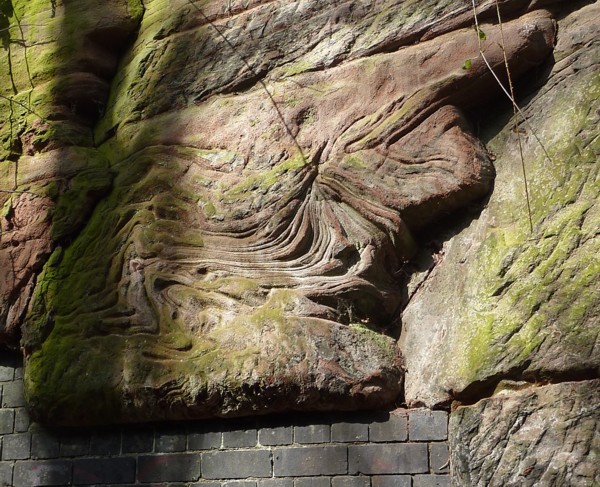 We emerged from the Wirral Way at Neston at about a quarter to three and caught the 487 bus back to Liverpool at 1512.  Some of us had even caught the sun!

If you are interested in the wildlife of the North-west of England and would like to join the walks and coach trips run by the Merseyside Naturalists’ Association, see the main MNA website for details of our programme and how to join us.