Dave Bryant, Dave Hardy and I picked a stonking day to visit the RSPB reserve at Dove Stones in the Derbyshire Peak District. We caught the Scarborough train at Lime St, changing at Staleybridge and continuing for a few stops along to Greenfield. Descending the hill from the station we walked a short distance through the village listening to the screaming Swifts before reaching the small river with its resident Grey Wagtails. A clump of Common Comfrey Symphytum officinalis was growing on the river bank. These delicate clusters of tubercular flowers were white with pink markings  different to the usually seen mauve colour. 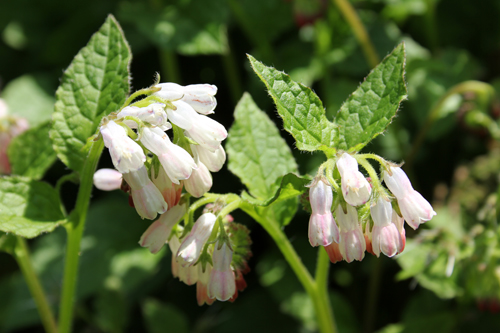 A few Orange Tip Butterflies were flitting around along with Peacock and Speckled Wood. A burst of bird song had us debating whether it was Blackcap or Garden Warbler  being short in duration like a Blackcap but bubbly like a Garden Warbler lacking the scratchy Blackcap tones. After brief views we decided on Blackcap.

From our path it looked like fishermen were marooned with their rods in the middle of a field.  We headed over and found a narrow canal with brown peat stained waters. An Alder Fly Sialis lutaria perched on the canal bridge. 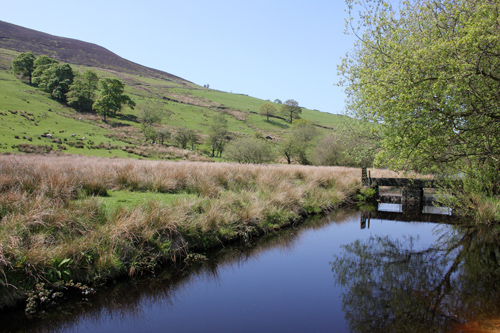 We began climbing with great views of the sheep covered fells and a dilapidated mill then passed the old mill workers terraced cottages which had a cheery collection of garden plants outside them and a cute stone gargoyle sat on a wall. Continued along a leafy lane to the main reservoir. 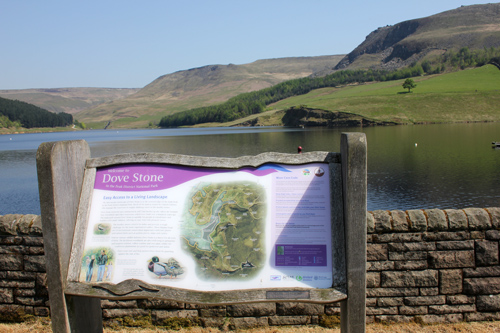 The blazing sun and blue skies had brought out the day trippers and dog-walkers. Walked anti-clockwise around the reservoir edge before heading up a side clough to escape the crowds. Birdlife was quiet with only a few Willow Warblers, Chaffinches, Robins and Coal Tits around. A small copse of trees provided shelter from the sun whilst we ate lunch. We followed a small stream before eventually finding enough stepping stones to safely cross and climbed up again onto the fell path passing our first Meadow Pipits but no sign of any Wheatears amongst the weathered craggy rocks. We stopped close to a coniferous forest, watching and listening whilst Redpolls buzzed around  one male in bright pink plumage perching on top of a conifer. Behind us a Tree Pipit took to the air singing whilst it parachuted quite a long distance into a small tree.

A Pheasant was chasing a dark green plumaged individual across the fell. Dave H said that this was one of the American varieties brought into the UK providing a greater challenge to the sportsman during the beat as these birds fly higher than our native breed.As we continued climbing to one of the smaller reservoirs Green Tiger Beetles Cicindela campestris took to the air from the sandy path before dropping down in front of us a few feet away. We played their chase game for a while before we found a more confiding Beetle that couldnt fly particularly well in the rough grass beside the path. Dave H caught it in a tube before transferring it onto the sand for a few pics and a closer look at the powerful jaws of this predatory mini-beast. 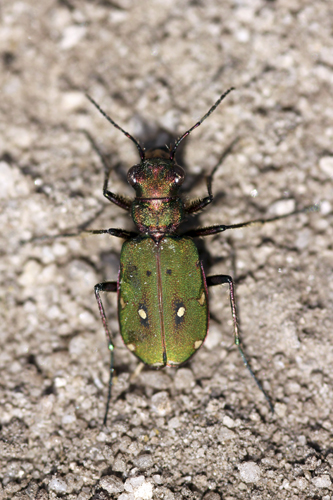 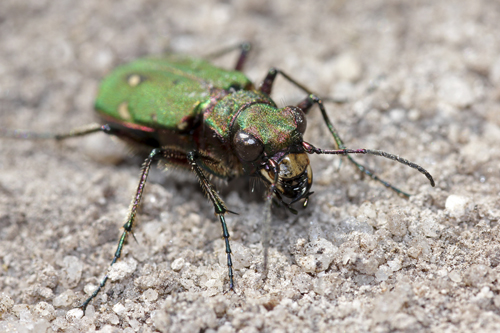 The characteristic high-pitched whistling flight call of a Common Sandpiper directed our gaze to three of these birds flying along the far edge of the reservoir with another two playing hide and seek on our side of the shore. Later we watched as two seemingly flew directly at the reservoir wall and concluded they must have a nest in one of the plastic inflow pipes. We watched a couple of Dippers bobbing around the rocks in a bubbling in-flow stream at the head of the reservoir and a Curlew landed beside the water before unusually silently taking to the air again. 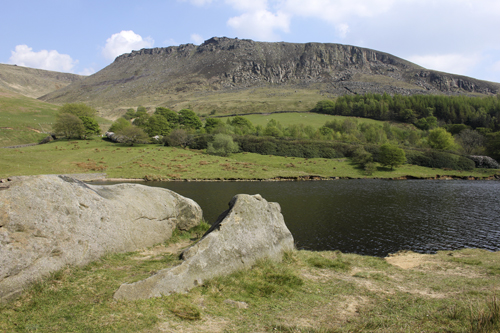 We descended stopping to watch half-a-dozen Nomada Wasps flying near a stone wall before reaching the main reservoir where a carpet of Wild Strawberries Fragaria vesca and Germander Speedwell Veronica chamaedrys put on a good show. It was a wander back along the road into Greenfield village watching the bunnies in the adjacent field enjoying the late afternoon sun and hearing a Nuthatch in a leafy copse. We rewarded our aching limbs after the climb up to the station with a quick pint in the Station pub before catching the return train.  A fantastic day with stunning scenery and hopefully a place to feature on next-years MNA programme.