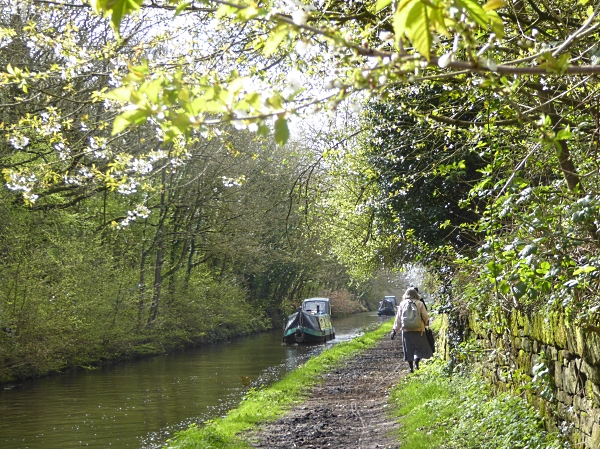 Today we walked the section of the Leeds-Liverpool Canal from Halsall to Downholland Cross. Bright sunshine all day, with just an occasional chilly breeze. In the gardens the Magnolia petals are dropping and the Forsythias are past their best, but the common deciduous trees are coming into leaf. These new Sycamore leaves were shining in the sun as we got off the bus. 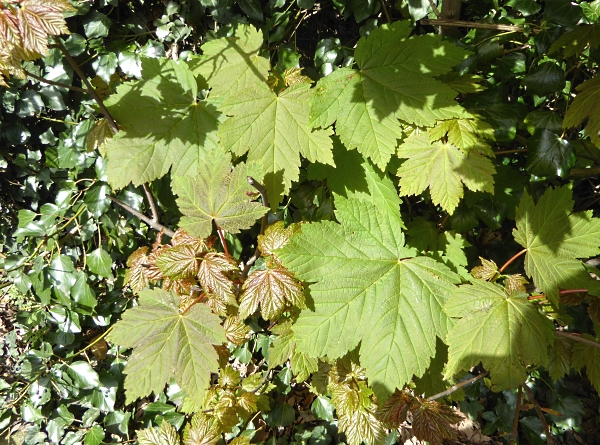 Jackdaws were foraging amongst the gravestones of St Cuthbert’s Halsall, where the lych-gate is flanked by two statuesque Irish Yews. 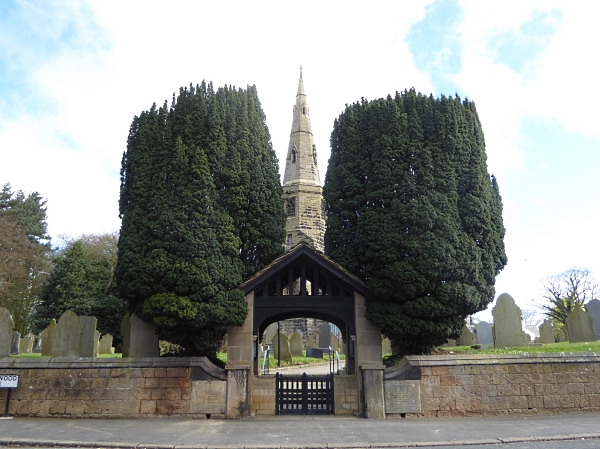 We headed east down Summerwood Lane, seeing Blackbird, Wood Pigeon and a Wren. Then we turned south onto the canal by the sculpture of the Halsall Navvy (a tribute to the men who dug the canal). We heard a Chaffinch and a Skylark, and had a glimpse of a possible Kingfisher flying low over the water. A Reed Bunting popped up briefly out of the reeds. Soon we came to the Haskayne Cutting – dead straight for eight tenths of a mile, which was rock-cut by hand all those years ago. There’s a new sign marking the place where the first spadefull of earth was dug. 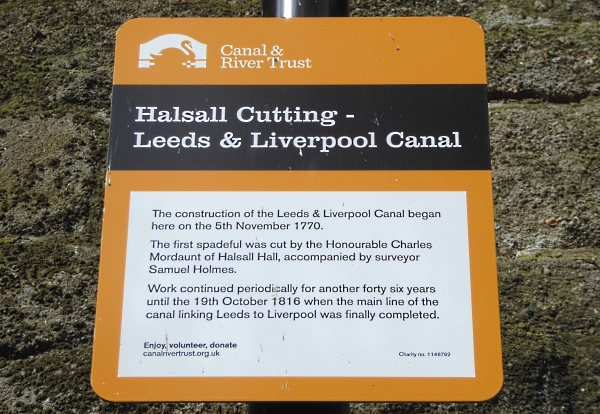 As well as the I-Spy tree and bird books, we have started on their wild flowers. So far this year we have spotted only Gorse, Daisy, Lesser Celandine and Dandelion. Here’s the question for the Dandelion: Where does the name come from? Answer at the end. We knew it and doubled our points, but only from 5 to 10. 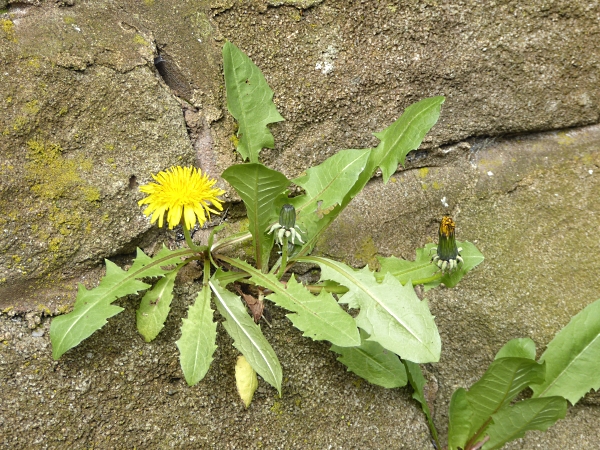 Lots of wild flowers were in leaf or bud – Speedwell, Cow Parsley and Garlic Mustard, but the only  “tickable” addition was White Dead-nettle, which was flowering all along the bank. We have a meagre 45 points for the year so far, but they will soon come thick and fast. 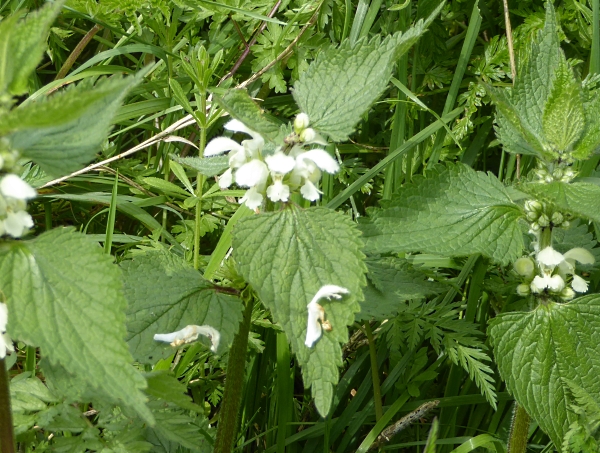 We lunched by bridge 23, Harker’s Bridge (which carries Plex Lane). There were no ducklings today, just small groups of loafing drake Mallards, waiting for their hidden mates to hatch the eggs. I think we saw only one Coot, and no Moorhens, so they must all be hunkered down too. But the butterflies and other insects were all responding to the warmth. 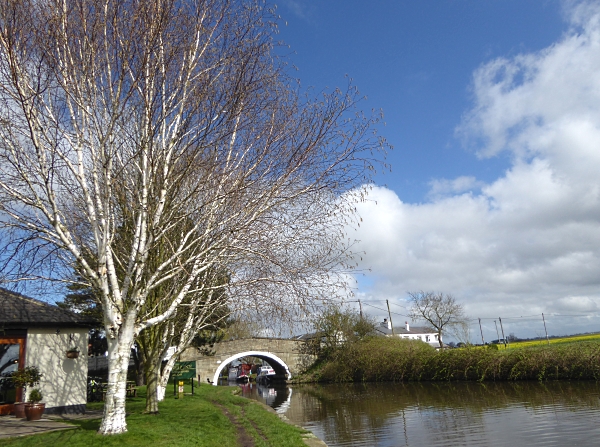 South of the Ship Inn an unidentified dragonfly zoomed past, one of the increasingly scarce native 5-spot Ladybirds sunned itself on a mixed bank of Cow Parsley and Cleavers (Goose Grass), several Bumble Bees droned around and we spotted both Peacock butterflies and several Small Tortoiseshells. 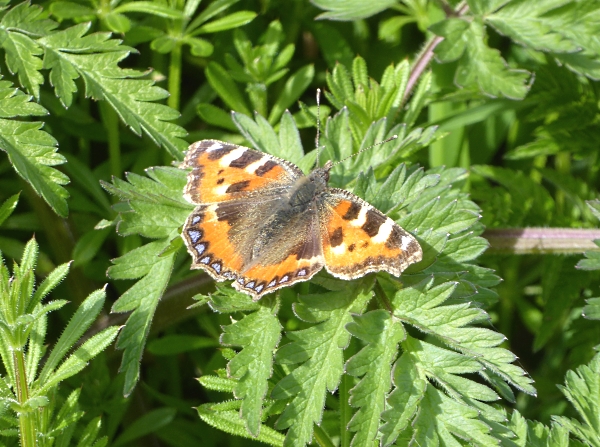 They are refurbishing the old canal mileposts to celebrate the 200th anniversary of the canal. All the remaining ones are Grade II listed, apparently. We found this one with the plate missing, but it must have been out for repair because someone has scribbled “Leeds 110¼” to assist whoever brings the new one back. 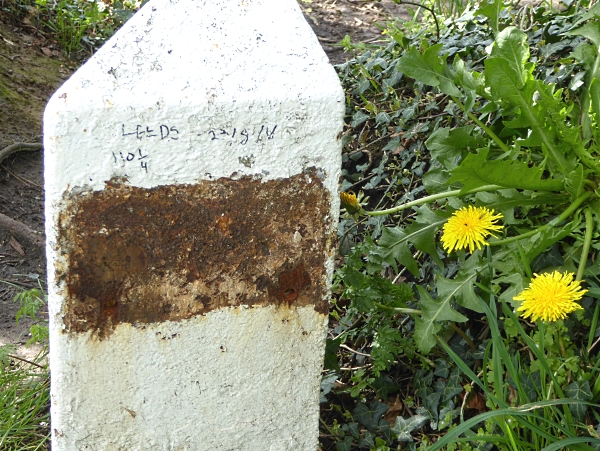 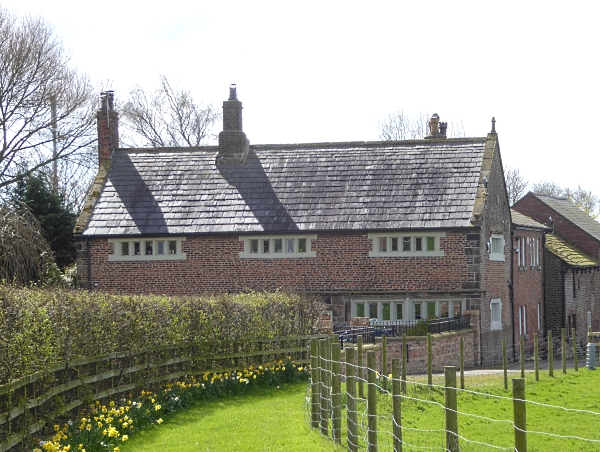 One of the trees I was hoping to find today was a Wild Cherry. All the garden Cherry trees are either out or coming out, depending on the variety, so Wild Cherries should be in flower. The old hedges of the canal are likely spots, and although it’s very hard to distinguish the members of the Prunus genus, this one wasn’t a Blackthorn, or anything else I could positively identify, so I tentatively suggest it was a Wild Cherry and claim my 15 points. 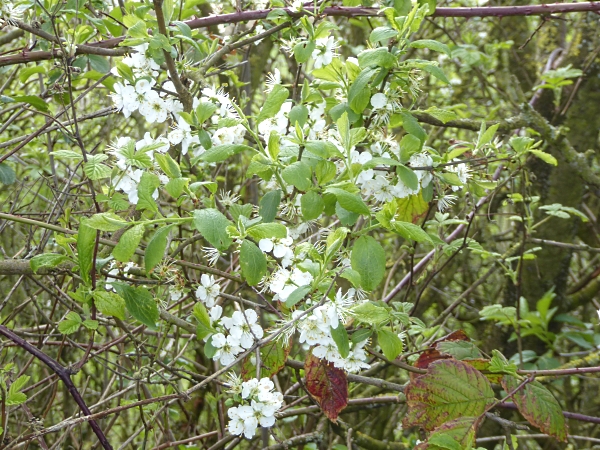 We had walked for three miles by then, and some of the older members of the group had begun to flag. We revised our plan to walk as far as Lydiate (another two miles), and got the bus at the New Scarisbrick Arms, rode it for just two or three stops, and went for tea and cake in the Hayloft tea shop. Afterwards we visited their farm shop, where I got some duck eggs. They keep Peacocks here (the exotic birds, not the butterflies), and they were all lounging about in the sun, taking the weight off their tails. 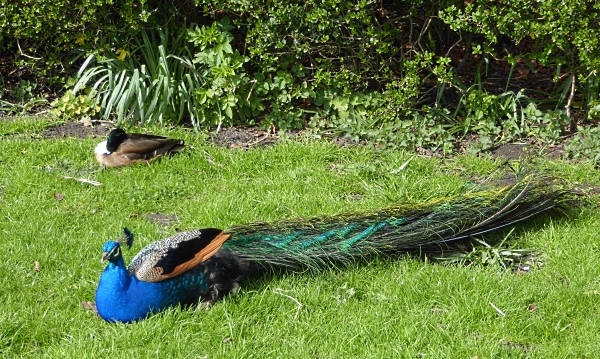 From the bus on the way home we saw several of the common street trees Norway Maple, which are just coming into flower. At this time of year the bare trees put out a sudden froth of acid-yellow flowers before the leaves. Here’s one from my neighbourhood. (It’s the one on the right.) 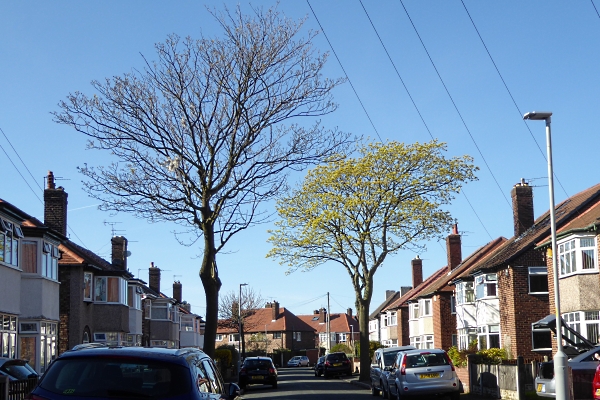 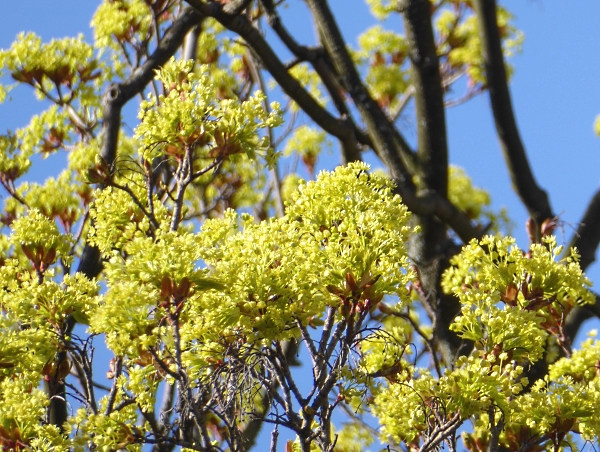 It isn’t in the I-Spy tree book, sadly, so today we got just 25 points from two tree species, taking the total to 645. Last week’s good birds actually took the score to 950 (when John got his glasses on and counted them up properly). We may not have seen anything new today but we hope for some spring migrants next week. We could hit 1000 points with just one or two good birds.
A: from Dent-de-Lion (French for “lion’s teeth”) which refers to the toothed leaves.

Public transport details: Bus 300 from Queen Square at 10.25, arriving St Cuthbert’s church Halsall at 11.25. Returned on the 300 bus at the Scarisbrick Arms at 2.27, although we got off three minutes later at Hall Lane, then came back to the same stop an hour later for the next 300 bus to Liverpool at 3.27.