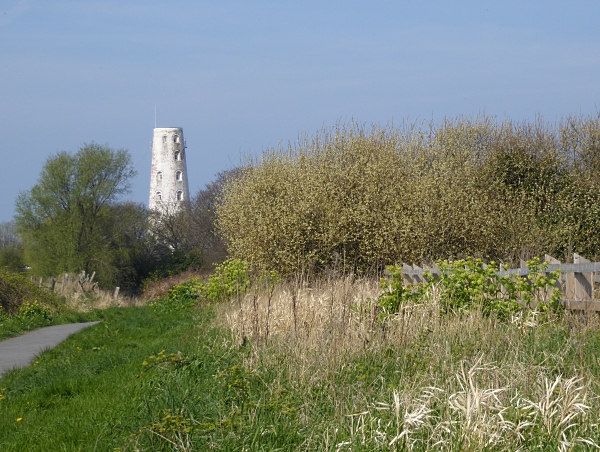 Leasowe on the north Wirral coast is a good place to find spring migrant birds, so we hoped to make our 1000 I-Spy bird points today: only 50 to go. We got off to a good start in Berrylands Road with a Collared Dove on a lamp post, a bird we really should have seen already this year, but inexplicably hadn’t (5 points). It was another warm and sunny day and the butterflies were on the wing even in the suburban streets – Small Tortoiseshell and Speckled Wood. By the stairs up from Bramble Way to Moreton Station we spotted our first Bluebells, but they weren’t “proper” native ones. The  Woodland Trust are currently running The Big Bluebell Watch, and are encouraging everyone to enter any they see onto a map, marked as “English”, “not English” or “neither”, which could mean hybrid, or “don’t know”.  I have entered all the ones we saw today.

It was a good day for wild flowers, which are all now starting to bloom. There was Red Dead-nettle by the wayside on Pasture Road and Garlic Mustard at the base of a telegraph pole. There is a question on that one “”Do you know any other names for this plant?” (Answer at the end.) We got it right so doubled the points from 15 to 30. 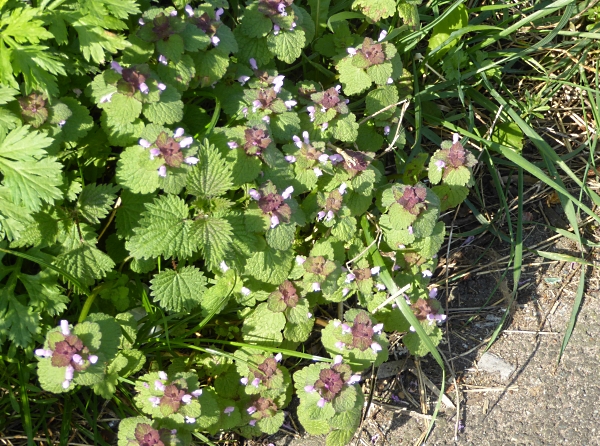 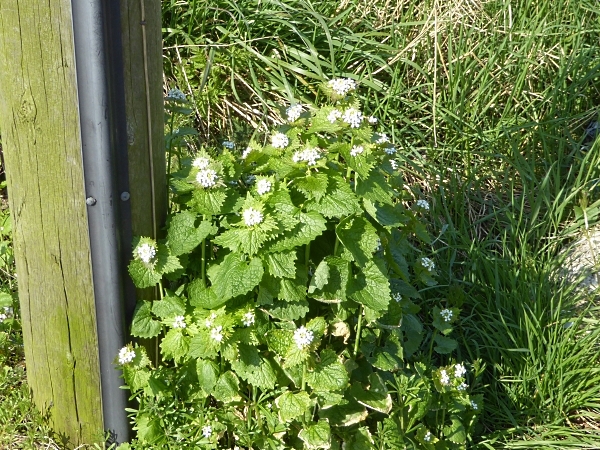 We spotted a row of White Poplars on the corner of Tarran Drive (15 tree points) and then turned onto the Wirral Circular Trail along the river Birket. Birds included Goldfinch and Blackbird, two Mistle Thrushes in a field, a Chiffchaff and a pair of Mallards on the water. We spotted out first Coltsfoot of the year, distinguished from Dandelion by their scaly stems, also our first Cowslips and lots of Green Alkanet in the shade of the hedge. 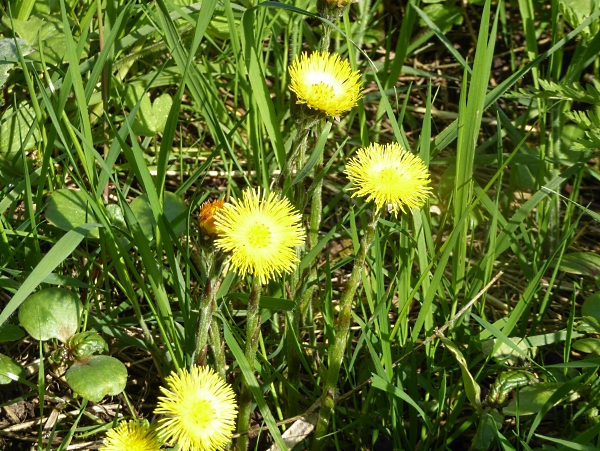 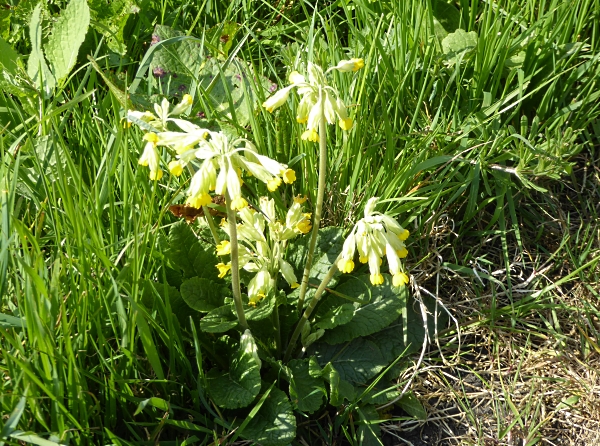 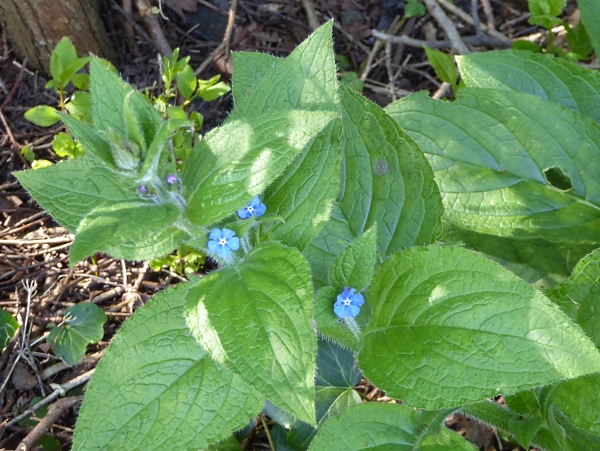 A male Orange Tip butterfly flew past us, heading towards the lighthouse, and there were lots of Harlequin ladybirds on the plant called Alexanders, some mating. This one has an unusual pattern – a black spot within a red spot. 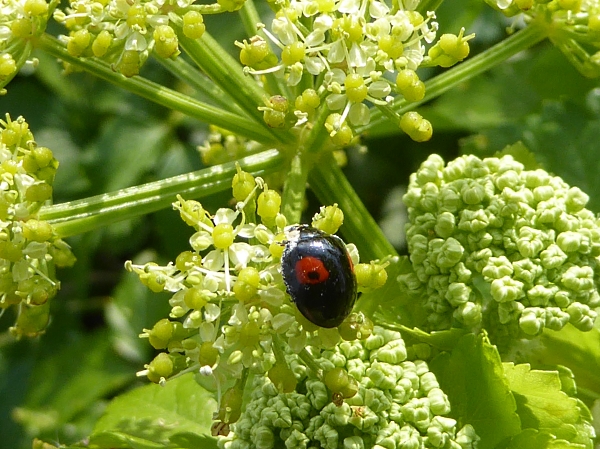 There were several Wheatears in the rough fields. We got 15 points for that, so now we are up to  970 and closing in on the magic 1000 points. 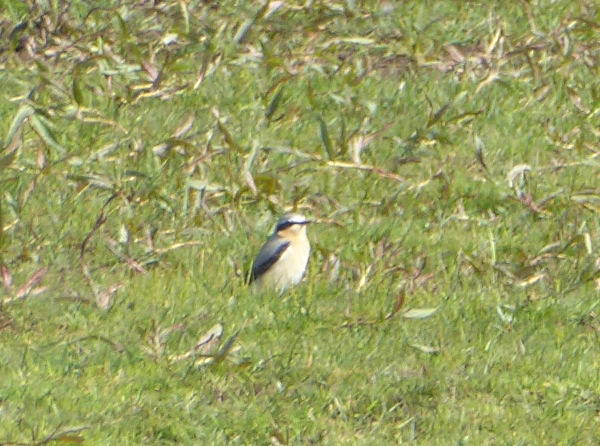 I think these buds are of Wych Elm. 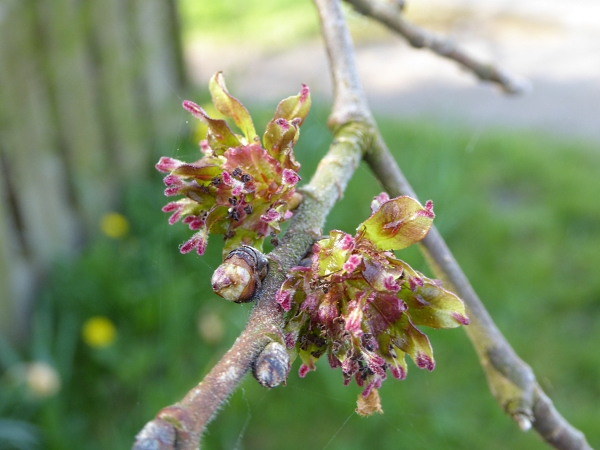 Previously I commented  that we were unlikely to see English Elm any more, and someone asked me why. They all succumbed to Dutch Elm disease, sadly. See this post by Bryony Rigby “Remembering the Elm” from the Manchester Museum’s “Stories from the Museum floor” blog.

We lunched by the lighthouse and watched a man in the field opposite, who was probably our well-known local ecologist Jeff Clarke, using a modified leaf blower to suck up insects from the long grass: he then carefully inspected his finds. Under our feet by the benches was Common Chickweed, another wildflower “tick”. On the path to the pond we saw more Speckled Woods, another Orange Tip, a Peacock and more Bluebells, probably hybrids. A Bumble Bee was humming on the path edge, probably a Queen White-tailed Bumble Bee. Then we took the long path through the horse fields, admiring how the empty ones were carpeted with Daisies. 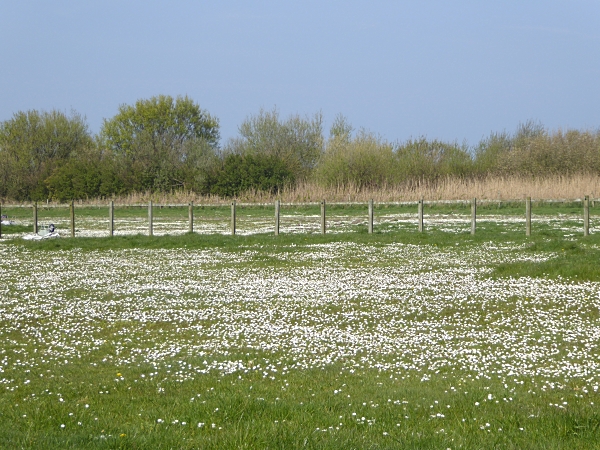 The Gorse was in full bloom, giving off a strong almondy smell. There were a few Linnets bobbing up and down, giving us another 15 points, now 985. We were really hoping for a Swallow or a House Martin soon, to take us over the finishing line. There was a White Wagtail by the fence (but it’s not in the I-Spy bird book, drat it). We studied two mystery birds on a distant post, right against the sun, but we couldn’t identify them. There was a Tree Sparrow at the back of the hedge opposite the farm, but that’s not in the book either. A Kestrel was hovering almost motionlessly in the updraft from the bank, and we stopped to admire its skill, (but we’ve already had a Kestrel). 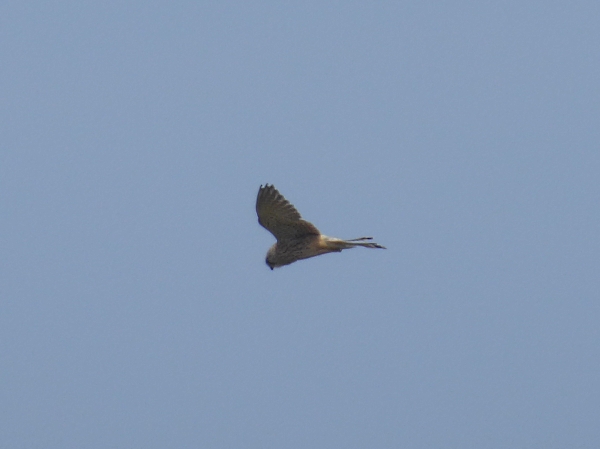 Sadly there was no sign of any Hirundines (Swallows or Martins), just a Pied Wagtail, so we climbed the bank and made our way back eastwards towards the Lighthouse. Off on the sandbanks in the water were three or four Little Egrets (we’ve had them). In one spot there were several hundred Coltsfoot flowers on the sloping side of the bank. We rarely see so many all together. We also commented on the abundance of Alexanders here, one of the only places we see it. It has a warm caramelly scent, classically likened to myrrh.  It is said to be found mainly close to the sea in the south of England and East Anglia, but it’s also found all around the Wales and Lancashire coasts. It’s native to the Mediterranean and was brought to the UK by the Romans, for cultivation as a food crop. 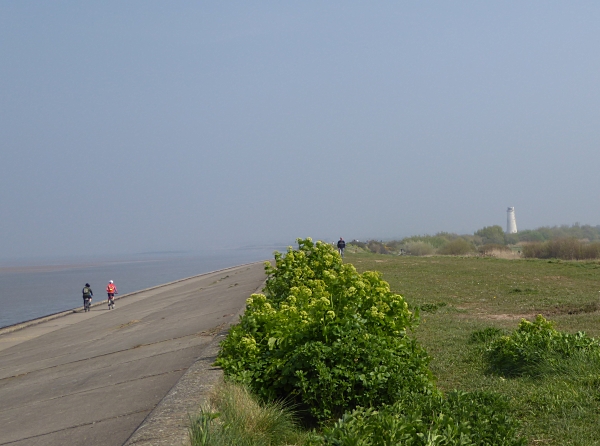 Then to our surprise a pair of birds settled on the cycle track along the sea wall. A pair of Bramblings! They are supposed to have migrated north already. They flew off before I could get a picture, but they are worth 30 points so we get our 1000 bird points in some style, overshooting to 1015. I have sent off for our certificate and badge.

Public transport details: We would normally get the train to Moreton, but because of the rail tunnel closure, we opted to avoid the rail replacement bus and got the 423 from Sir Thomas Street at 10.10, arriving Maryland Lane near Moreton Cross at 10.55. Returned from Moreton station on the 2.42 train, arriving Birkenhead North 2.50. Then onto the rail replacement bus which got us to Moorfields at 3.10.