Well, what nasty Sunday weather that was! A hard cold rain started at about 9.30 am and went on relentlessly all day. Even the city centre pigeons decided to take shelter inside Central Station. 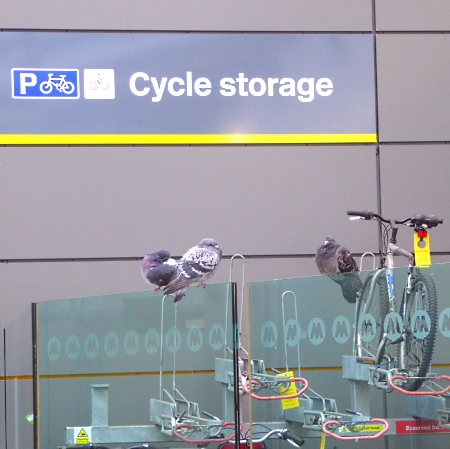 Somewhere with plenty of cover was called for, and Southport fitted the bill. But I wish the weather had been like this! 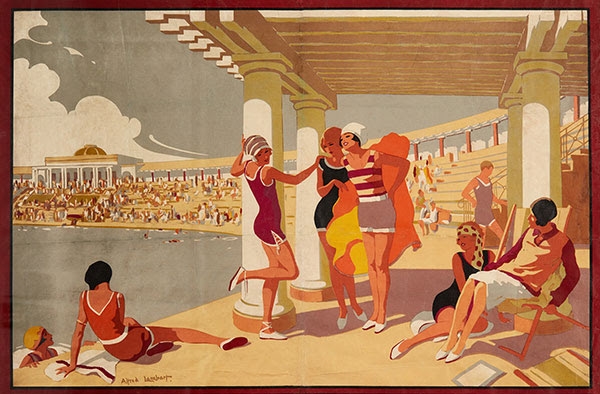 We spotted a Pied Wagtail and a Dunnock in King’s Gardens and the usual suspects in the Marine Lake. One Coot had a Darvic ring BNJ (black on white, left leg), which has been reported to Kane Brides.  (Added later: She turns out to be a Geordie Coot ! Kane passed the sighting on to Andy Rickeard of the Northumbria Ringing Group who responded “Coot BNJ was ringed at Killingworth Lake in North Tyneside on 17/11/2012 as a young female. Since then she’s been sighted at Southport Marine Lake on 13/12/15, 21/2/2017 and now your sighting as well. Thanks again for the information, it’s really appreciated.”)
A very young (and hungry) Herring Gull was begging from its mother, but she was having none of it. 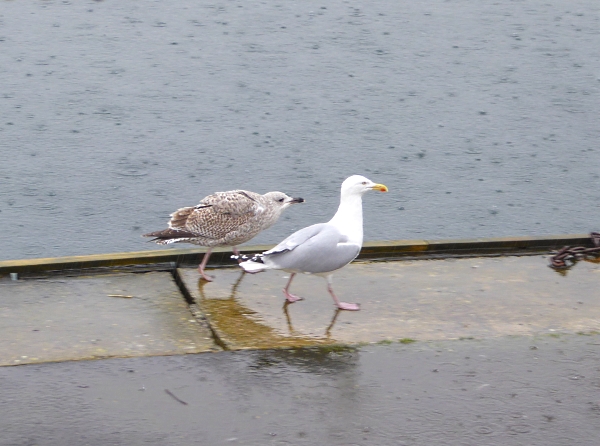 We wandered a little way northwards along the Lower Promenade to the back of the Ramada Plaza, where there are sheltered seats overlooking the islands. Good spot for lunch. Lots of Mute Swans about, including an adult couple who were seeing off a brood of about 5 young ones from last year. On the island was a Greylag Goose (10 I-Spy points) and some Greater Black-backed Gulls (GBBs, 15 points). Two of the GBBs appeared to be courting. They were parallel swimming and calling, and one, presumably the female, was paddling in an oddly low and arched-back position. When they got to the island the leading bird seemed to lower herself into an inviting posture, and I was convinced they were going to mate, but nothing happened.  They faced away from each other and eventually one flew off. It’s easy to anthropomorphise this as a “slow” male not enterprising enough to get on with it, but I wonder what was really happening? 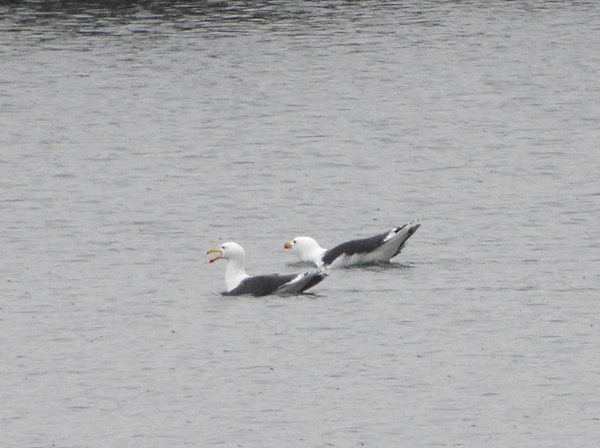 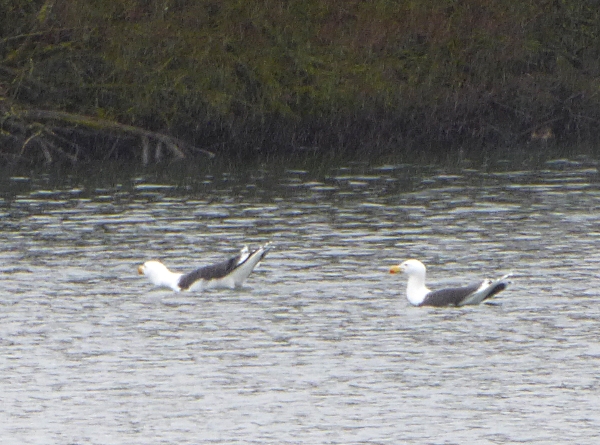 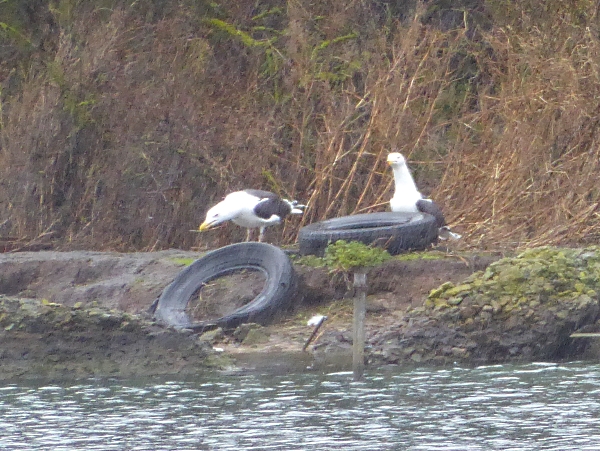 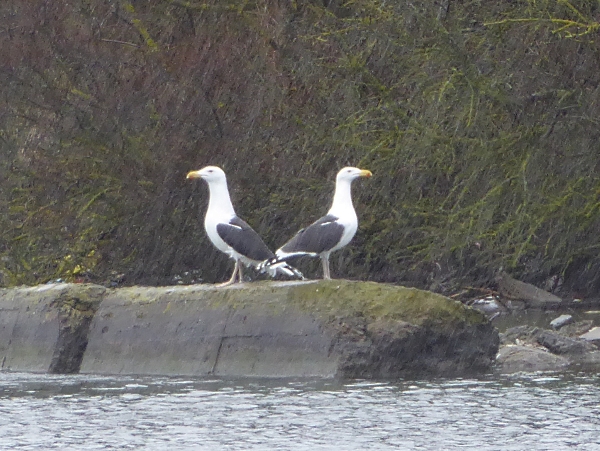 But that was quite enough out-in-the-rain for us, and we retreated to the Atkinson. Their “Between Land and Sea” exhibition had a display about the Lunt Meadows excavations and a diorama of how the encampment might have looked. 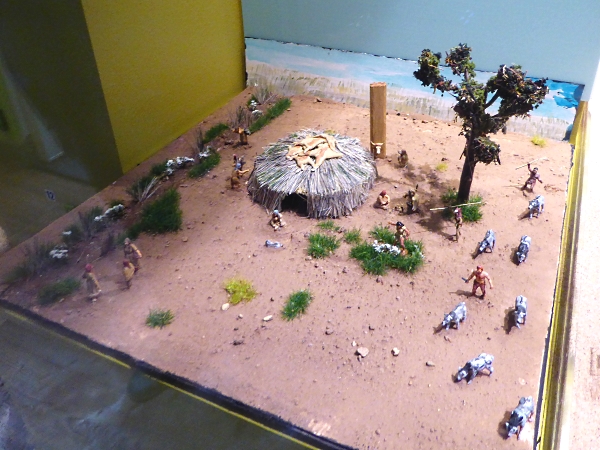 On the way in we had looked at a blue plaque to F J Hooper, “Southport’s Polar Hero”, who had been on Scott’s ill-fated Antarctic expedition of 1910-1913. He helped to find Scott’s body and came home with Titus Oates’ skis (which are in the museum). In later life he was the “Mayor’s Officer” in Southport. Here he is in a shameless plug for Heinz Beans, who were one of the expedition’s sponsors. 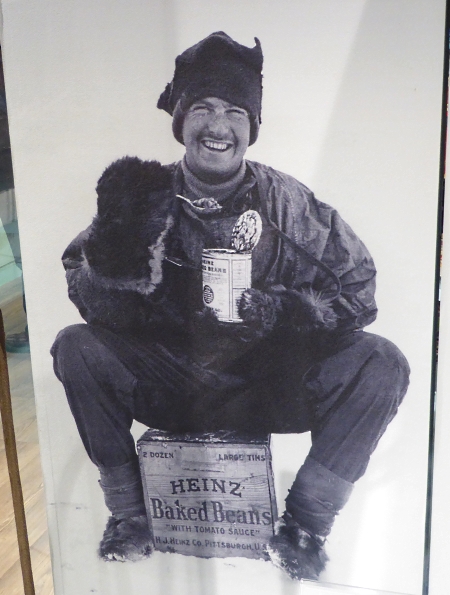 On the way home we did some birding from the train windows, and spotted Pheasant and Curlew north of Hightown and some Lapwings before Hall Road. More bird points, but no tree points today.  Earlier in the week there had been sunnier days. On Wednesday 1st March I joined the MNA short walk to Stanley Park. Here’s a Mistle Thrush and a Great Crested Grebe on a nest. 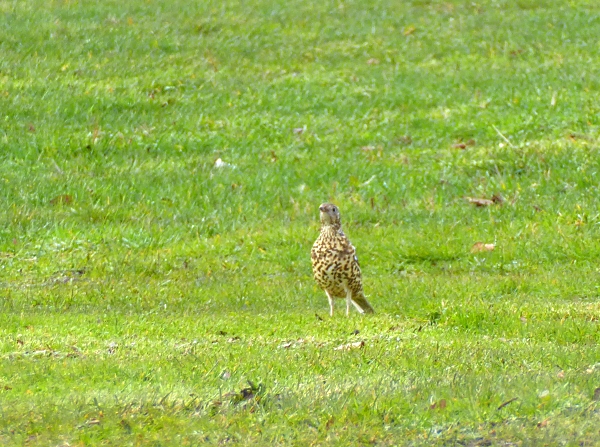 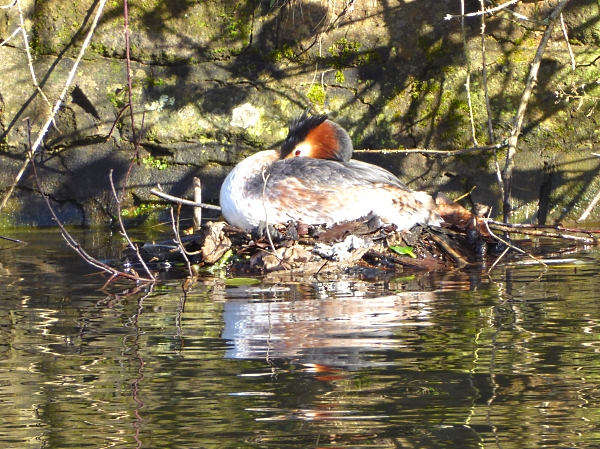 And on Friday the crocuses in Alexandra Park were outstanding! 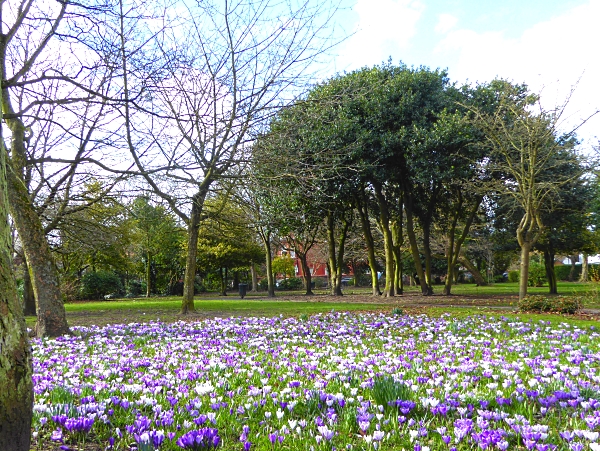