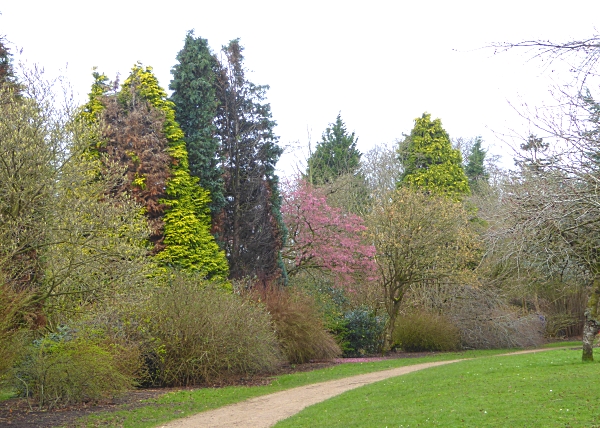 When we entered the park near the south east corner, at the Allerton Road / Ballantrae Road junction, we found a new path going off to the left, through some shrubby woods. There were clumps of Three-cornered Leek and a sunny bank full of Lesser Celandines. Hooray! Another sign of Spring! 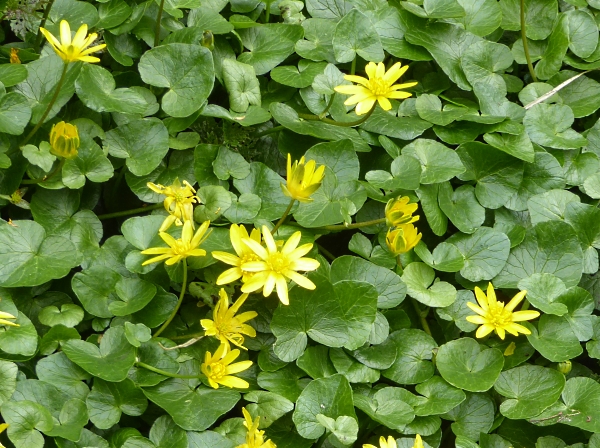 In the area of lawns and shrubs north of the text garden we admired a Corkscrew Willow, a Tibetan Cherry tree with its peeling mahogany-brown bark, a blooming Forsythia and the shrub Pieris japonica. The common garden variety has bright red new leaves and is called ‘Flame of the Forest’, but this one had no red on it at all, just the hanging clusters of white bell-like flowers. I think it’s probably variety ‘Purity’. 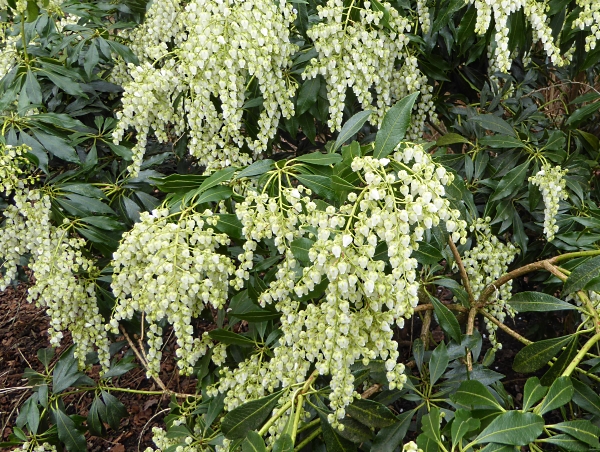 Roses in a long bed were all sprouting, and some early Cherry trees were starting to bloom. 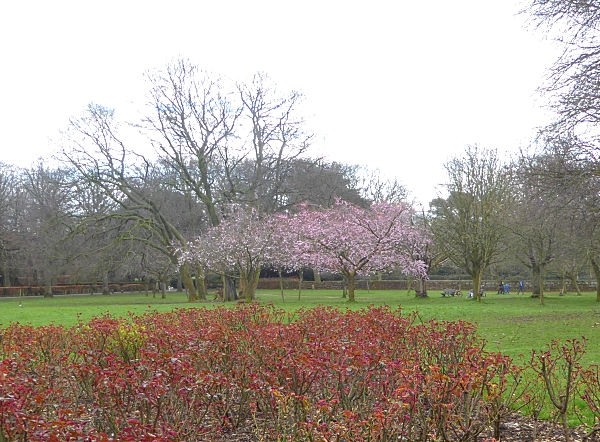 There was more damage from Storm Doris – a Blue Atlas Cedar had lost a large branch, but instead of breaking off, it appeared to have “unplugged” from a conical socket in the trunk. Not the first branch to do that, by the look of the holey trunk. 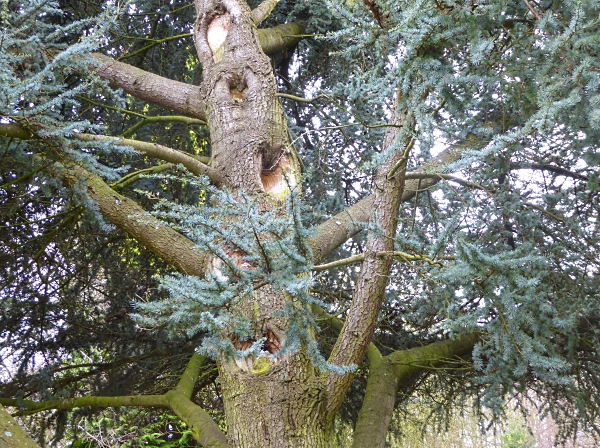 The south-facing orangery was full of Camellias in magnificent bloom. There were red ones and white ones, but also this gorgeous pink candy-striped variety. 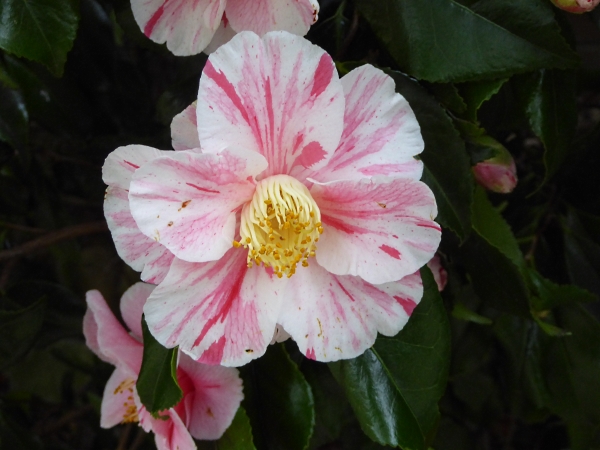 Just past the greenhouse sheltering the Calder Stones was a tall obelisk behind a fence, said to be the sample of Scottish granite that Jesse Hartley approved for the building of Liverpool Docks. It seems rather neglected here, and perhaps could do with being on display somewhere near the waterfront. 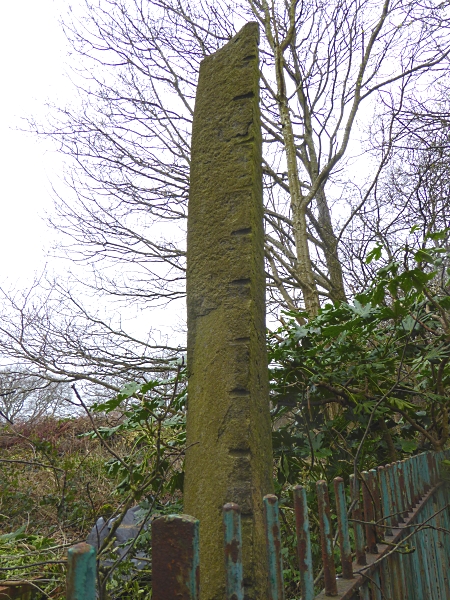 There were Grey Squirrels everywhere, and we spotted a Robin, Long-tailed Tits, Great Tits, Blue Tits and a Jay in the woodland.  Then through the arch in the wall, which marks the boundary of Harthill, and we were in Calderstones proper, by the flower garden. Two Mimosa trees were in full bloom. 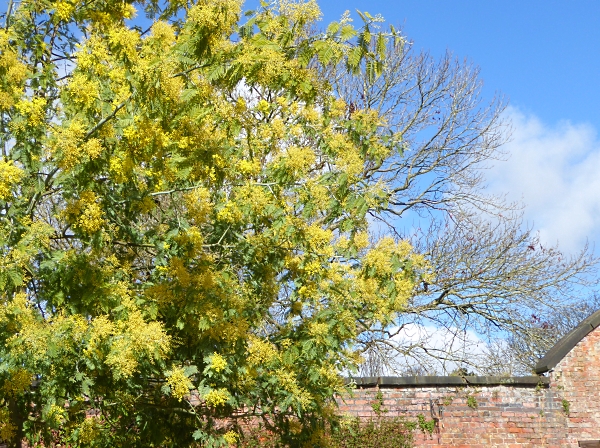 We lunched in the Old English garden, where there was a fine display of crocuses under a tree. Amongst them were going-over Snowdrops, and some Snake-head Fritillaries which weren’t quite out. Nearby were a few clumps of blue Scilla siberica ‘Spring Beauty’. A shy Dunnock was pecking about under the seats. The morning’s sunshine had gone, and there was a hint of drizzle in the air. We heard the drumming of a Great Spotted Woodpecker, and eventually spotted it in one of the tall bare tree on the Harthill side of the wall. 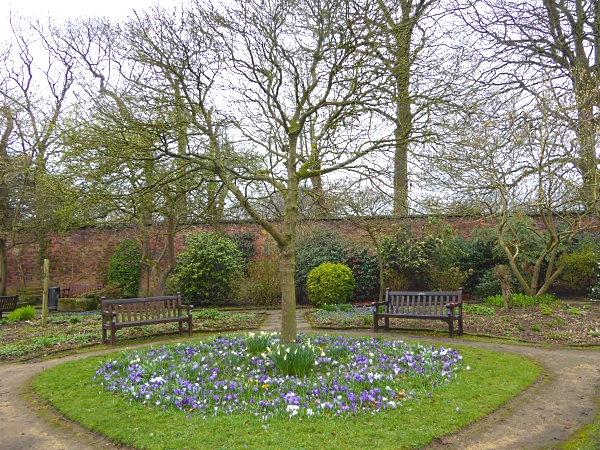 Calderstones is one of the best parks for trees in the north of England, so I had checked the I-Spy book for trees that we might only see there, and had recce’d them earlier in the week. (Some of my pictures were taken on that sunnier day.) Juniper was one of my targets. A list of Liverpool trees by Bob Hughes from about 2004 had suggested there were no Junipers at all in Liverpool because they prefer to grow on chalk, but Colin Twist’s Calderstones survey of 1999 said various Juniper species were “well-represented in the Old English Garden”. There appear to be two or three different types in the Japanese Garden. Several species are in the tree books, and I have no idea which was which, but they were definitely some kind of Juniper, so I claim my 15 points. We got the question right, too, so doubled it to 30 points. (Q1 “What are Juniper berries often used for?” Answer at the end). 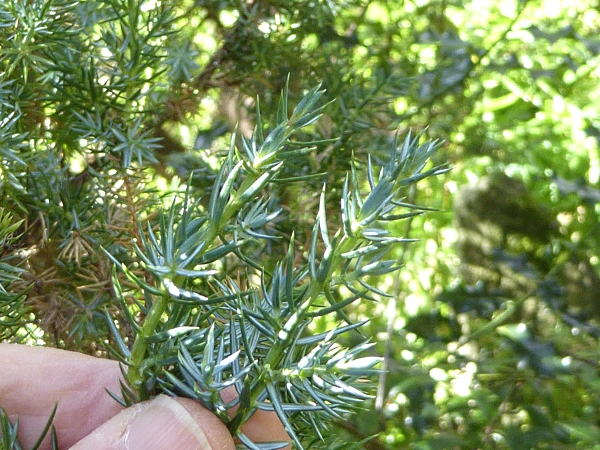 The Magnolia buds are just breaking and there’s a magnificent spreading one outside the Mansion House. We get 20 points for that. 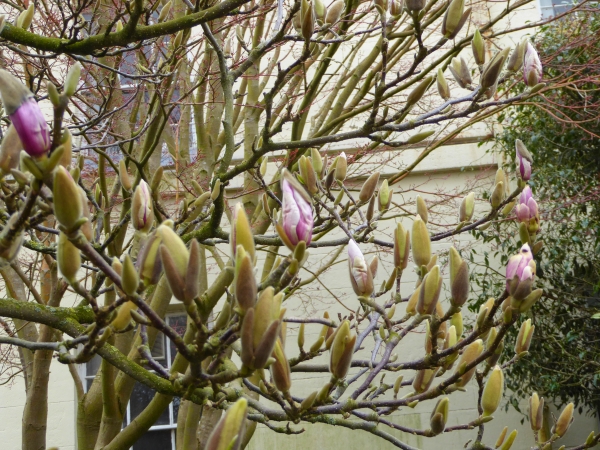 Another target was a Cedar of Lebanon, with one said to be near the Rockery.  I had hunted for it on my recce, without success. Today we approached the area from a different angle, past the Allerton Oak, where a storyteller was instructing a gang of children “now take your wands …”, and I finally spotted it. It’s a poor moribund thing, almost bare of leaves, with just a few distinctive cones clinging on near the top, and a big split in the trunk. It’s dead, or nearly so, but we claim our 15 points for it. 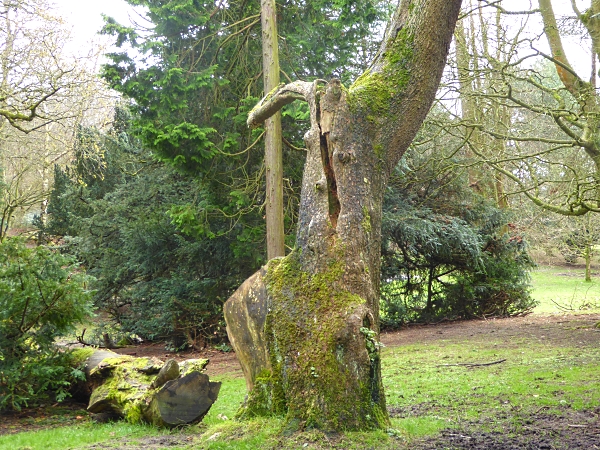 That area is also supposed to have a Douglas Fir, but I didn’t find it. Colin Twist tagged one there, but his list was compiled nearly 20 years ago, so maybe it has died, too, and been removed. But we did find the Paperbark Maple Acer griseum in the Rockery (20 points). 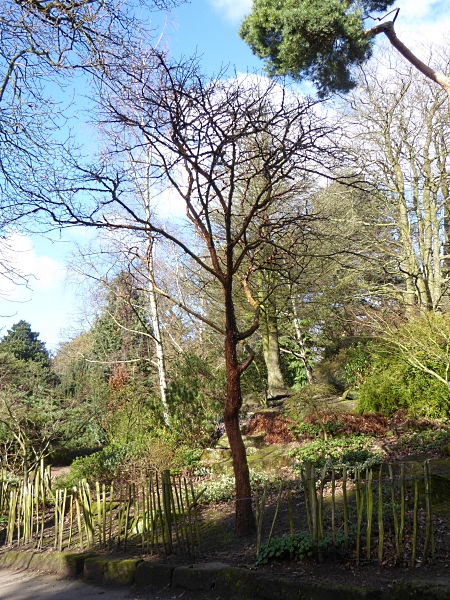 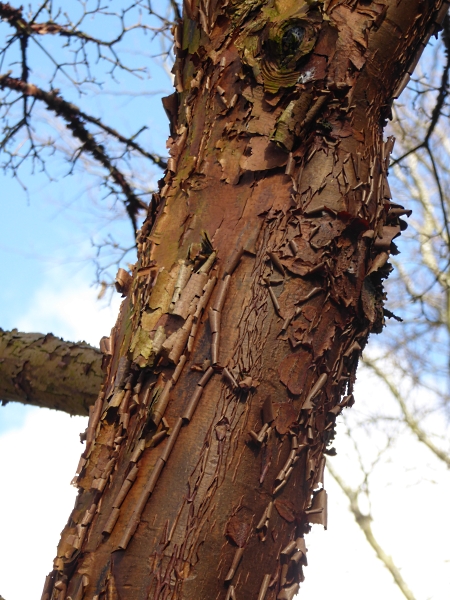 Uphill from there is a pair of Deodars and a clump of Larches. We debated whether they could be Japanese Larches, and decided probably not. But 15 points for European Larch anyway. The last target tree was a Coast Redwood, which is near the Calderstones Road entrance. It has red fibrous bark, Yew-like foliage, but with a pair of white bands on the undersides (see second picture below). It’s marked as a Top Spot, worth 25 points, which we doubled by correctly answering the question. (Q2 “How long can a Coast Redwood live? Answer at the end.) 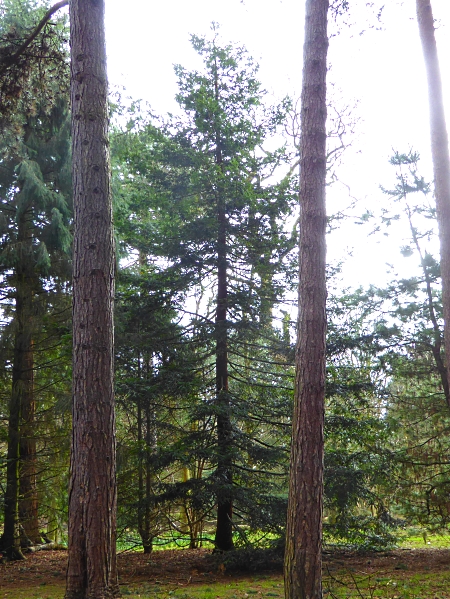 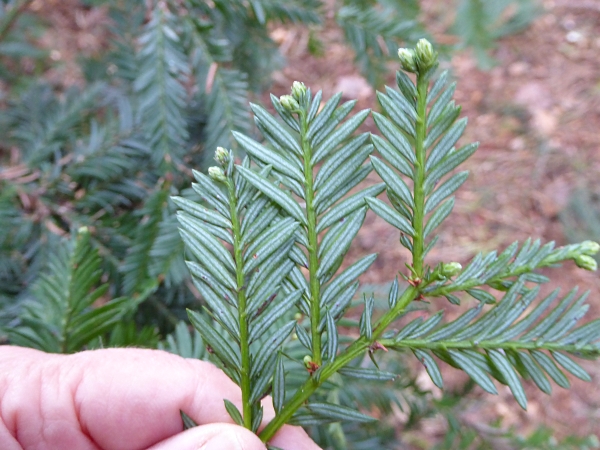 We got 150 points from six trees today and now have 545 tree points. The birds are at 680 points, with very little new today. In Liverpool city centre on the way home I spotted these cheerfully-painted bird boxes on the London Plane trees outside the Bluecoat. 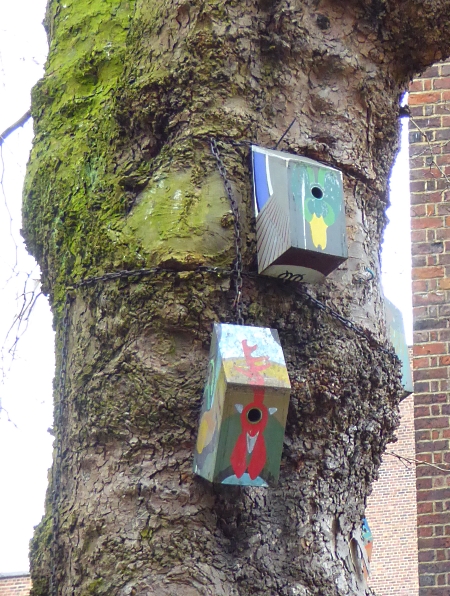