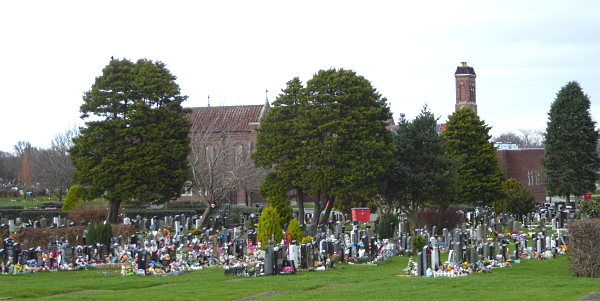 Our plan for Landican Cemetery was to look for Brown Hares, which are known to be there, occasionally nibbling the freshly-offered bouquets of flowers. In the event only two of the group saw one (not me, so no picture). It loped off from a lawn near the CWGC enclosure into the woody cemetery edge. The rest of us were too busy looking at a fallen tree.  Storm Doris passed through last Thursday, and we saw several trees down by the roadside on the way. There were some spectacular casualties in Landican, including this snapped-off Leyland Cypress. 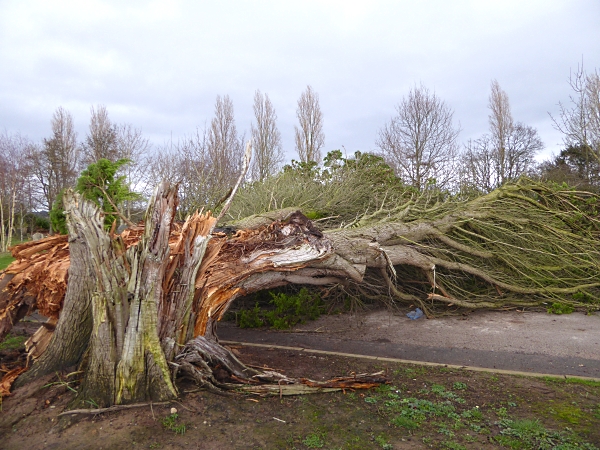 In the corners of the CWGC area they have planted some small ornamental trees which had clusters of bursting pink buds. Too early for cherry. Almond? But there was a single long-stemmed fruit looking like a spotty orangey rose hip, about the size of a hawthorn berry.  One of the Service Tree group?  No idea. 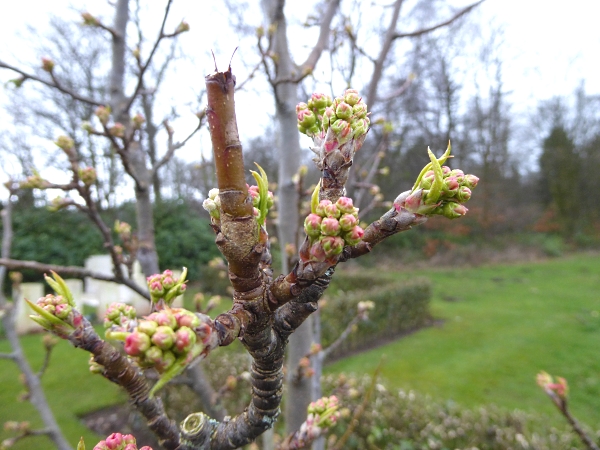 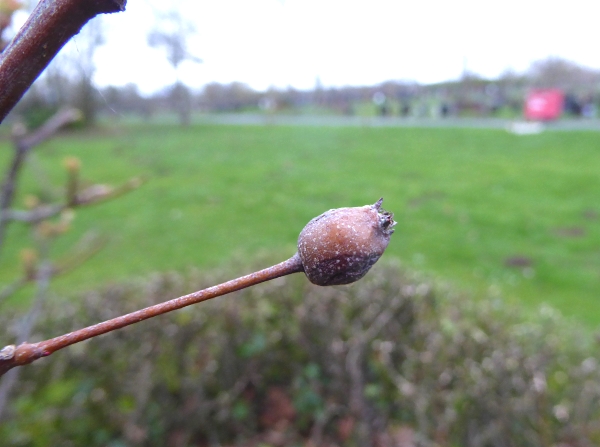 There were Irish Yews dotted about. They are classed as the same species as Common Yew Taxus baccata, but of the variety ‘Fastigiata’ (meaning upright or vertical). I checked about a dozen of them as I went past, to see if they were male or female. All the ones I looked at were male, with clusters of “blobs” full of pollen sporangia. When I looked them up at home the book said Irish Yews are usually all female. Huh? Then I looked at the picture again and noticed that they had yellow-edged leaves, which makes them variety ‘Fastigiata Aurea’, which are all male clones. Puzzle solved. 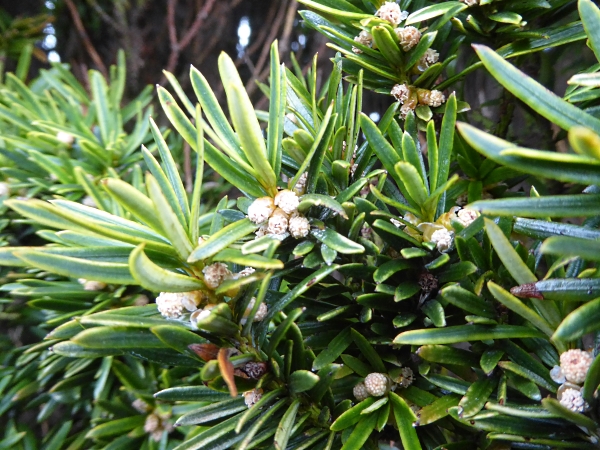 There weren’t many birds about. We saw the odd Great Tit and Crow, and a Buzzard passed overhead. Last week’s star turn Buzzard was worth 25 I-Spy points and took the bird total to 585 but we added no new ones today. As for mammals, there was the Hare, the odd Grey Squirrel and lines of fresh Molehills. We remarked that many of the trees had bird boxes but, unusually, they were all different shapes and sizes. All of them had memorial plaques on them, so they must be the latest fashion in remembrance. 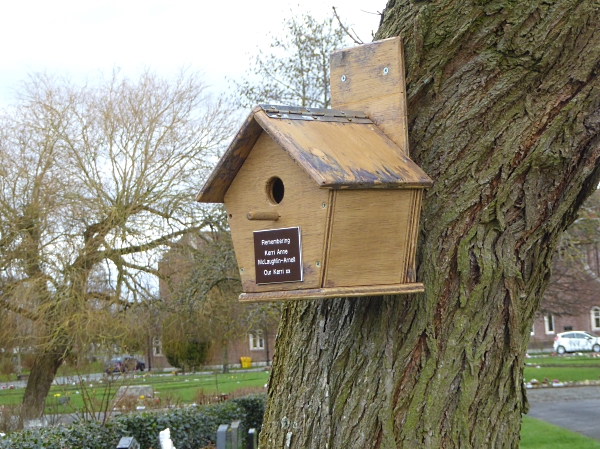 On the opposite side of Arrowe Park Road is the old Ranger’s house, now sadly derelict. 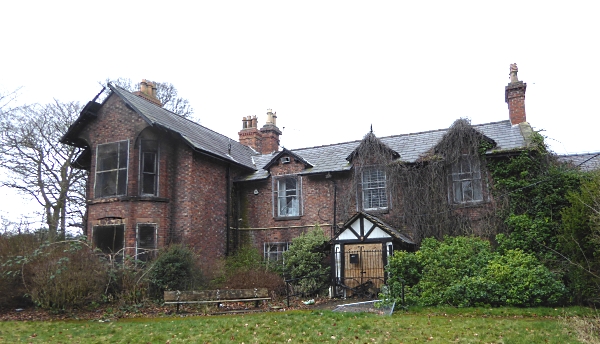 We had our lunch on the bench there, where we were sheltered from the gusty wind. It had had a lovely garden once, with a tall Deodar, Jasmine by the door and masses of Snowdrops and Daffodils beyond the lawn. The gateway out to the Park was adorned with a huge twisted trunk of a climber, perhaps a Clematis. 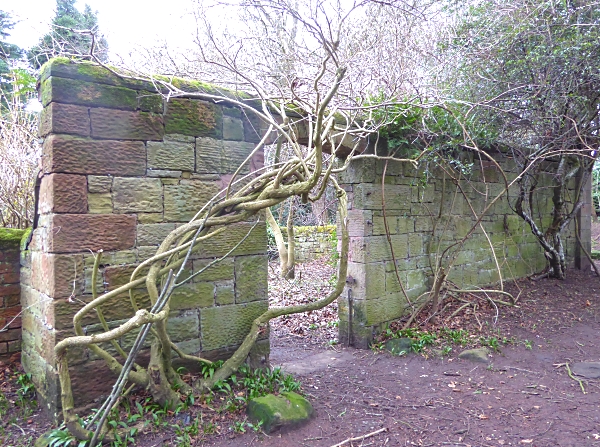 The Common Yew there was also a male tree, and when it was shaken, produced clouds of pollen. 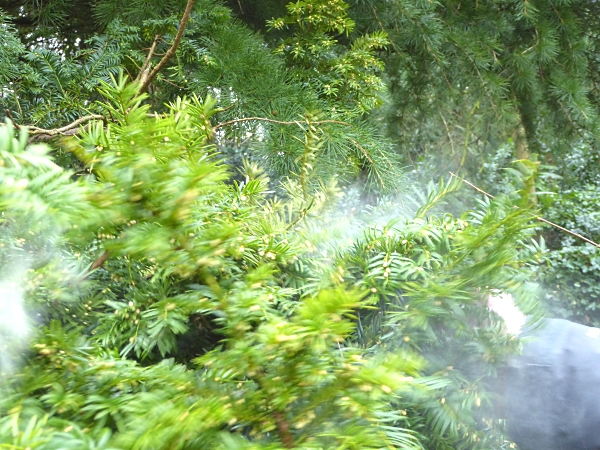 In the park, we found two more trees for our list. The first was a Lawson’s Cypress ‎Chamaecyparis lawsoniana, worth 15 points. It’s a tall, dense, columnar evergreen tree. 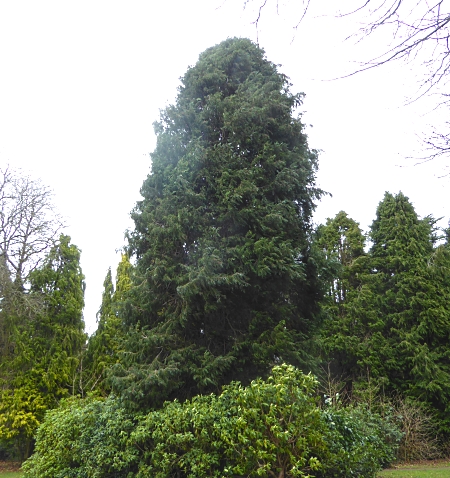 The foliage is dark green, said to smell a little like parsley, and the tiny leaves, pressed close to the stem, have white edges. The effect is to make each frond appear to have white diamonds or zigzags along it. 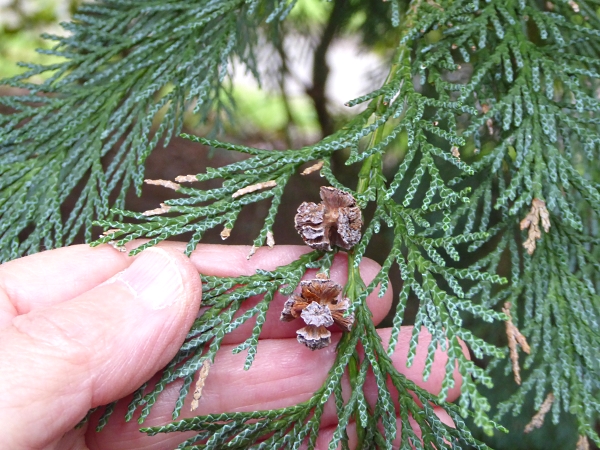 Further into the shrubbery was an even taller tree, a Giant Sequoia or Wellingtonia Sequoiadendron giganteum. 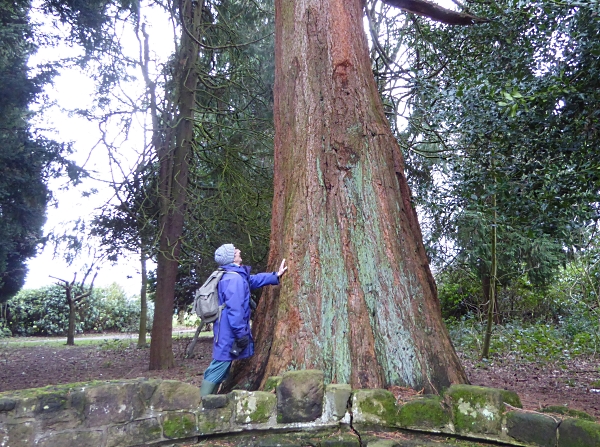 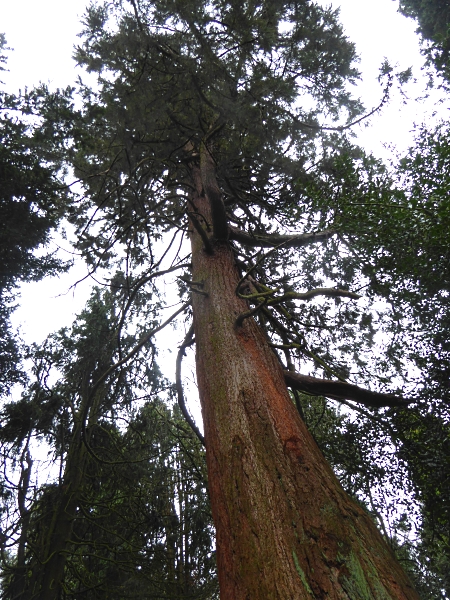 It’s another “Top Spot” 25-pointer, and we doubled those points by answering the question “The world’s most massive tree is in the Sequoia National Park in America. What is it called?” (Answer at the end). Our tree total is now 395 points. The cones are big, but not enormous, and the foliage is showing the male flowers at the tips. They ought to be yellow with pollen, but they might have been nipped by the frost. 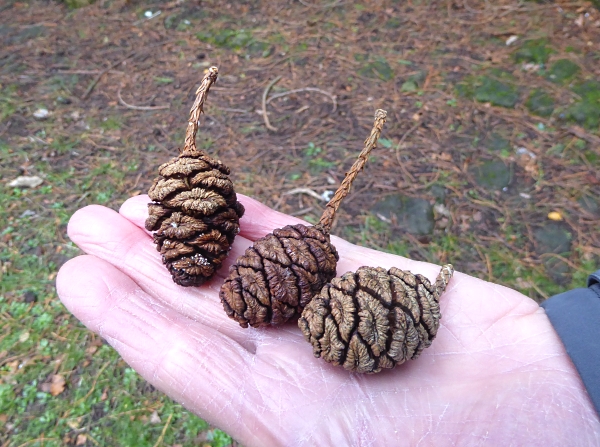 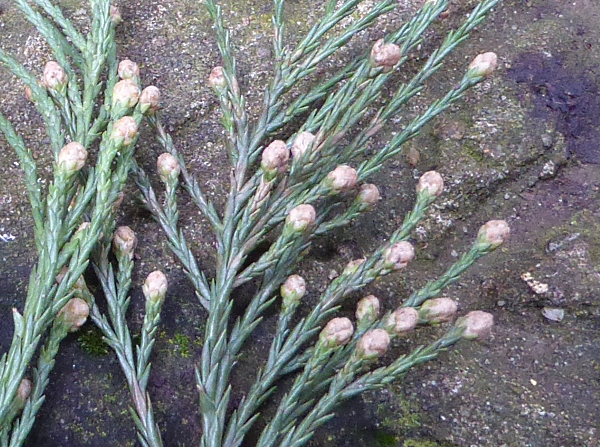 The sun came out while I was on the way home. There was the unusual sight of all the deciduous roadside trees brightly lit by sunshine whilst still bare and grey.
(Answer: The General Sherman tree).