On the way out to the bus this morning I found this lovely back-lit spider’s web on a Rowan tree. 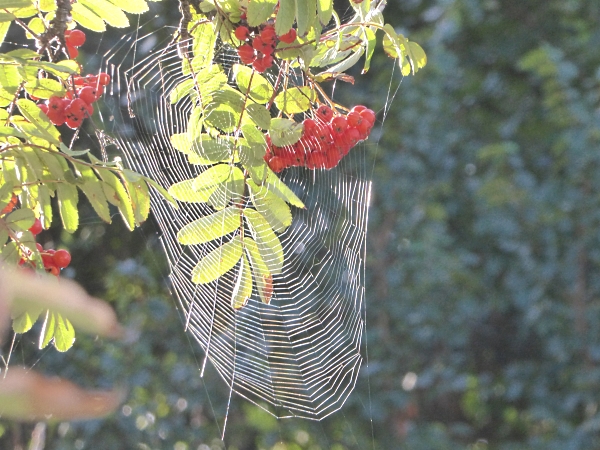 In St John’s Gardens the Indian Bean trees are now full of their long grey seed pods, and the Trees of Heaven are in copious fruit, which is starting to turn red. 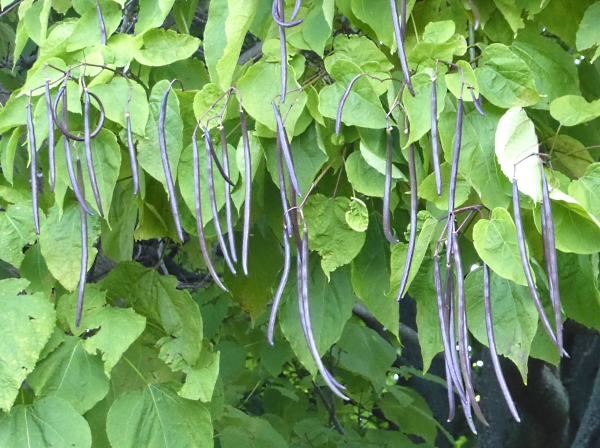 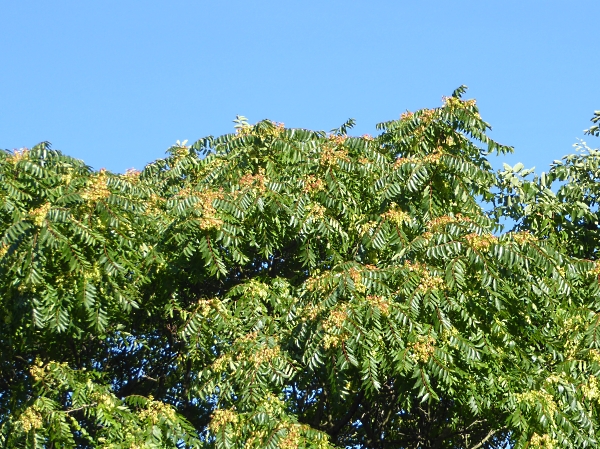 Our plan was to go to Deane Road Cemetery, St John the Evangelist church in Thomas Lane and the rarely-open Bright Park. In the event, two of the three didn’t open as billed, which was disappointing. Deane Road Jewish Cemetery bore a hand-altered sign saying it was to be open next week, but not this week after all. Some last-minute crisis, no doubt. So we caught the bus further on to Springfield Park.

There is an interesting tree with big divided leaves on the central reservation of East Prescot Road opposite Warmington Road. A Fig? A Sweet Gum / Liquidambar? It had alternate leaves and spiky seed balls. A crushed leaf was sticky but not aromatic. We concluded that it was an Oriental Plane Platanus orientalis. 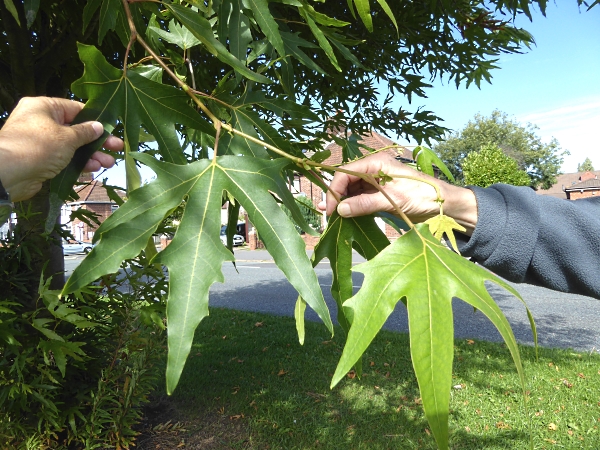 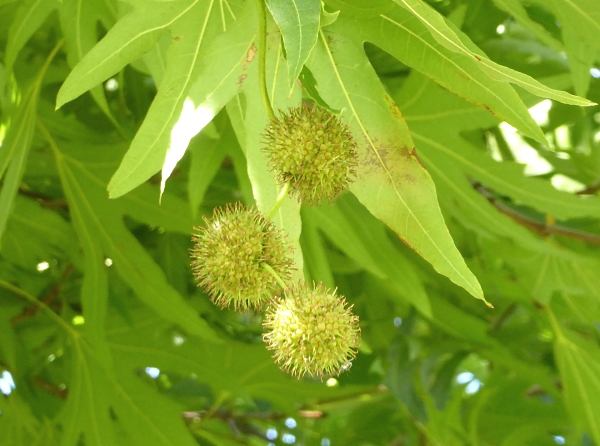 Mitchell says it is “rare north of the Midlands”, and it is very unusual to find a rarity like that in the middle of a busy road. Margaret tells me there is a young Tulip Tree along there too, nearer Queen’s Drive. Someone obviously had some money left over in that year’s budget to spend on interesting tree plantings.

In Springfield Park there is an obelisk to Lord Nelson commissioned in 1806 by Mr Downward, a local sugar refiner, and sited for many years in the garden of his residence, Springfield House. The house is long gone and the garden, latterly Springfield Park, was partly built on by the new Alder Hey Hospital, but now the park has been restored, and the monument has been re-erected by the Friends group. It is known locally as the “Half-Nelson”. 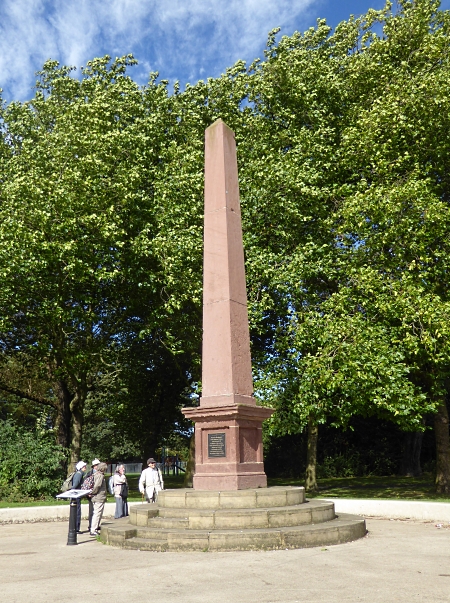 There were four House Martins overhead. Are they nesting on the old hospital building nearby? Where will they go when it is demolished? The new Alder Hey Hospital has green roofs and a smart new garden area at the back entrance, with kid-friendly climbing equipment and spongy path surfaces. There are interesting tree plantings there, too, including two or three young Locust trees Robinia pseudoacacia, turning a lovely yellow. The adjacent flower bed has a surprising stone sculpture, shaped like a shark’s fin. The writing on the other side says “Ever see a shark / picnic in the park? If he offers you a bun …. RUN!” 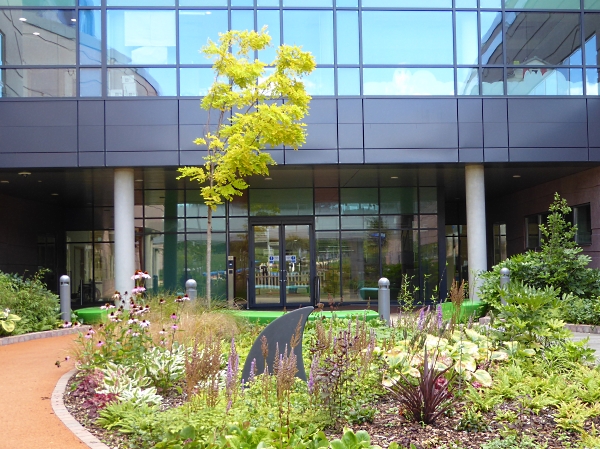 There were also a few Ginkgos and some young Apple and Pear trees, some already bearing fruit. One reminded me of “I had a little nut tree / and nothing would it bear / but a silver nutmeg / and a golden pear”. 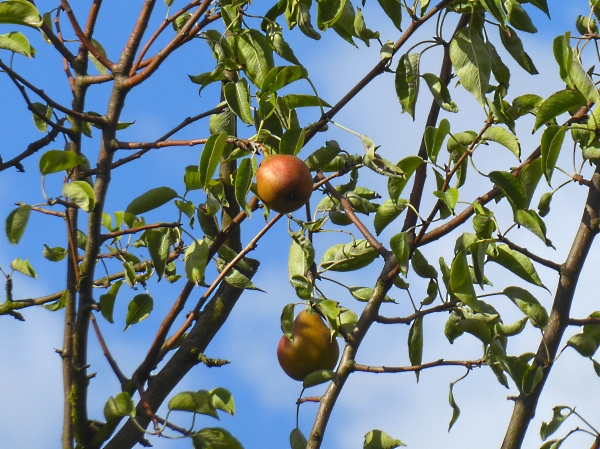 We looked at the row of six old cottages called Little Bongs, then walked along Thomas Lane. Ken Dodd’s house is on the corner. Then into churchyard of St John the Evangelist C of E for lunch. We saw a Speckled Wood there, and noted a Weeping Ash next to the church. 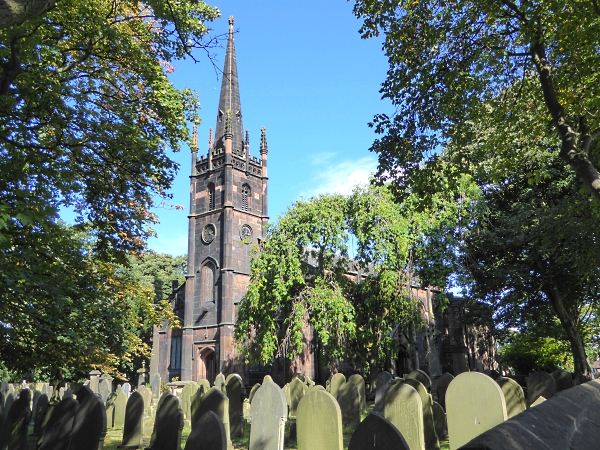 The church makes much of their “Titanic” gravestone. A local couple called Harrison put up a stone in memory of two of their sons, Swainston Harrison Jr who died in Africa aged 22 in 1892 and “Norman Harrison, Second engineer SS Titanic, foundered off the coast of Newfoundland  April 15th 1912, aged 38.” Neither of their sons can be buried there, but the parents are.

We took a tour of the crypts. When we peeked through a grating we could see the very long lead coffin belonging to Marcus Hill Bland who died in 1856, said to have been 7’ 6” tall. Then to Bright Park, but there was no sign of it being open. The Heritage Open Day information said “Bright Park, (formerly Thingwall House), was the residence of Henry Arthur Bright, a Victorian shipping magnate who left his house and gardens in his will to the furtherment of the education of the people of Liverpool. Come and explore the park and its 4.9 acres of woods, orchards and trails. Come and see this secret wilderness for yourself and enjoy privileged access to a park that had only been open a handful of times in the last 30 years”. There were  lots of disgruntled people turning up (including us!) but there wasn’t even a loose railing to get through. One young couple bunked over the wall with the aid of a handy telephone switching box. When we saw them later they said they’d seen a Fox, which stood and stared at them in surprise at having its patch invaded.

We finished the day with a quick visit to the Church Hall, where they had some old school attendance registers and a punishment books. One young lad was caned for “mistreating a frog”.  There was also a school project from 1933 about the trees of Calderstones Park. It wasn’t about rarities, but about trees in general, and ended with a series of observations through autumn and spring 1932/33 on when the leaves of various common species’ leaves fell, and buds broke.

On the way home I spotted another orange-berried Rowan on Prescot Road near the old abattoir (now the Meat and Fish market). Still not spotted any of the rarer white-berried ones, though. Anyone know of any?