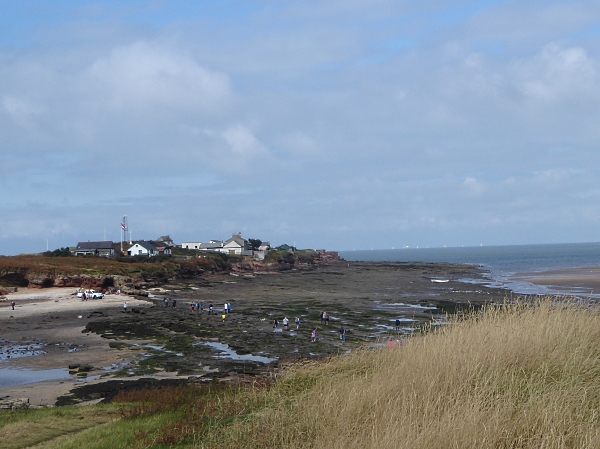 The notice at Dee Lane slipway said we were not supposed to set out until 11.30, but there were crowds already ahead of us at 11.20. After the recent uptick in seaside fatalities, the Lifeguards were very obvious all day. 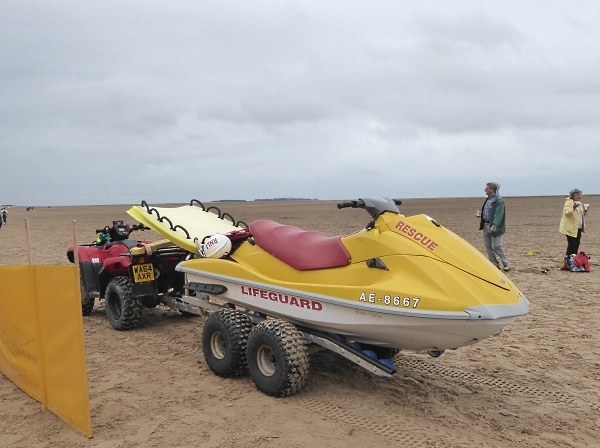 It was overcast and breezy, not too hot, a perfect day for the crossing. There were Cormorants and Herring Gulls towards North Wales and a line of Oystercatchers further over. A Heron beat its way towards Mostyn. Apart from the well-trodden path, the sand was covered in worm casts, and there were tiny crabs scuttling about in little pools, then burying themselves. The bigger pools had minute fish in them. It took only 20 minutes to Little Eye, then a further half an hour to Middle Eye, arriving at 12.10. We saw our first specialist flowers there, several clumps of Sea Mayweed Tripleurospermum maritimum. Until 1969 it was classified as the same species as Scentless Mayweed Tripleurospermum inodorum, and when we consulted the book of flower photos in the Telegraph Station it was called Scentless Chamomile, but in view of the rocky maritime environment, Sea Mayweed seems most likely. 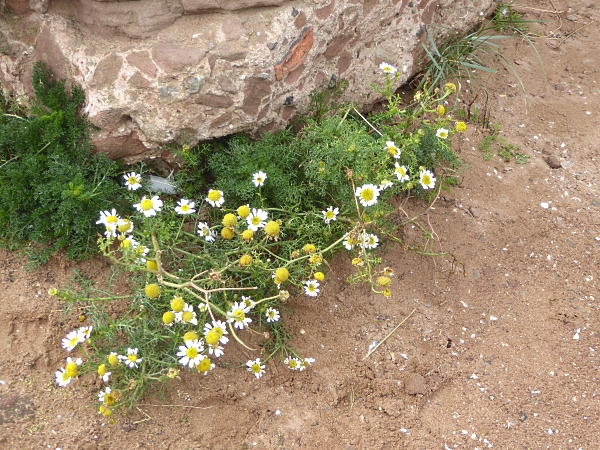 We lunched on Middle Eye, looking out south eastwards to Hoyle Bank and the Grey Seals. 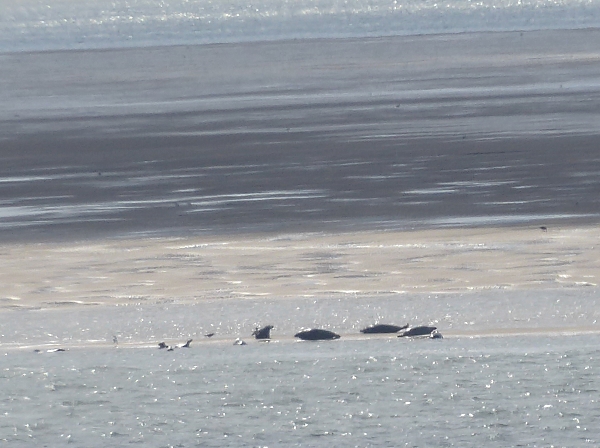 There was a Meadow Pipit in the grass, Oystercatchers on the rocks below and what was probably a Wheatear, which dashed across our line of sight then went down below us and disappeared.  The sun came out, and one Large White appeared. Several late Swallows were hunting overhead. Then we crossed to Hilbre itself. The rocks bore carpets of young barnacles and clusters of Winkles, also known as Periwinkles and Edible Winkles, Littorina littorea. 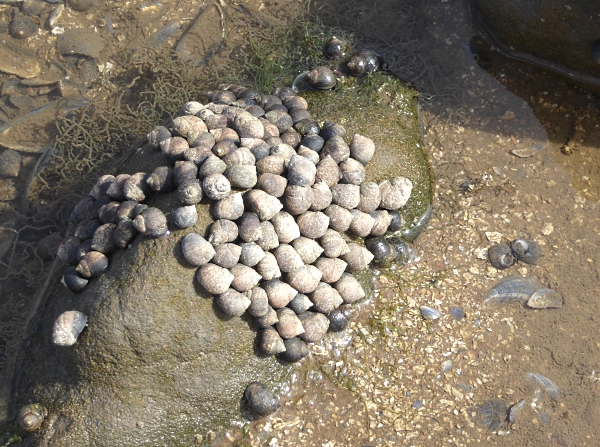 Growing high up on the red sandstone wall was a plant with blue flowers which might have been Rock Spurrey, and there was Rock Sea Lavender near the base. Clumps of Thrift were everywhere, most going over. Margaret found a tiny ladybird which appears to be an 11-spot Coccinella undecimpunctata. “Rarely found inland, except on sandy soils, this species is very coastal in its local distribution, but where it does occur it can be common.” 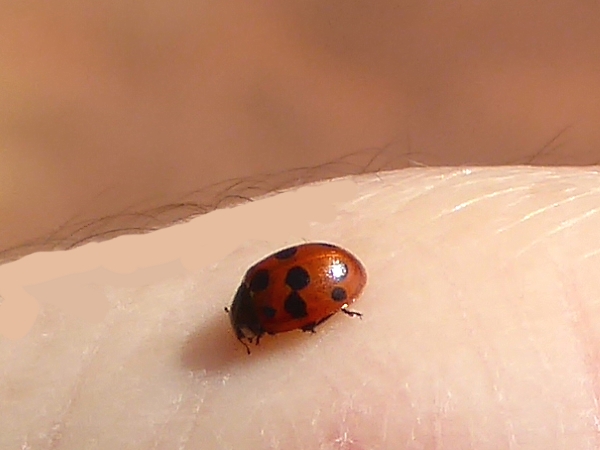 The Friends of Hilbre had declared an Open Day and were running a tea and cake stall, which was very well-patronised. 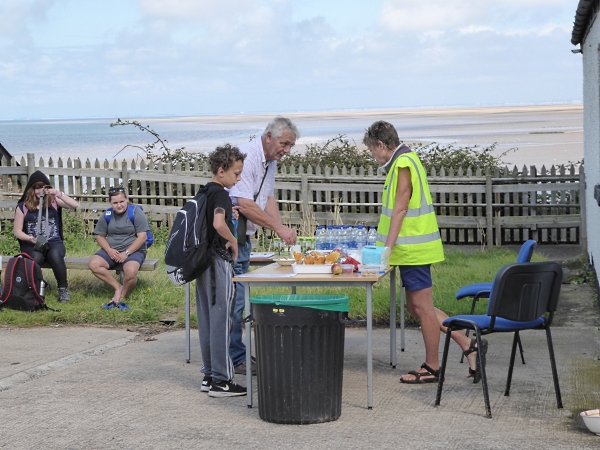 The beach towards Red Rocks and Hoylake was packed with birds. 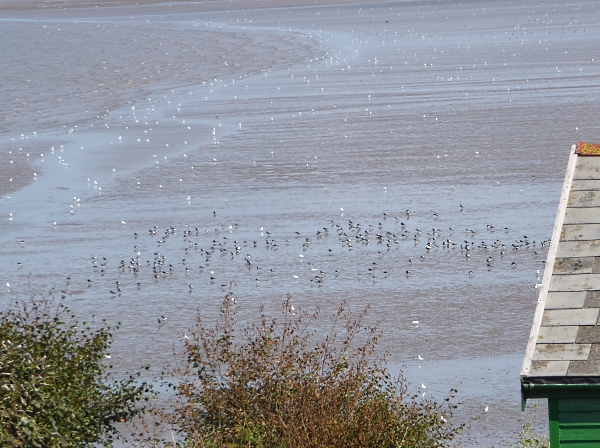 We set off back again 1.55, noting the Heligoland Trap, used to catch and ring migrant birds. There was a Dragonfly patrolling in a bay in the rocks on the north side of Middle Eye. We thought it was brown, but couldn’t see it well enough to identify it further. There were plenty of Lugworm holes in the sand, and we came across this stranded Jellyfish, possibly a Lion’s Mane. 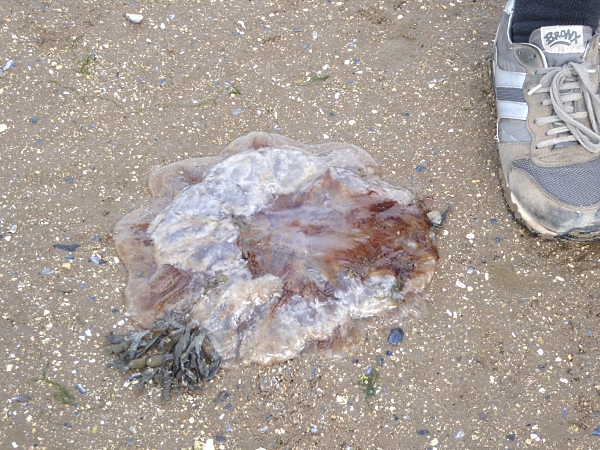 Then we followed the returning crowds back to the slipway, arriving just before 3pm. It’s about 2 miles each way, and allowing time to stop and look at everything, can take just over an hour. 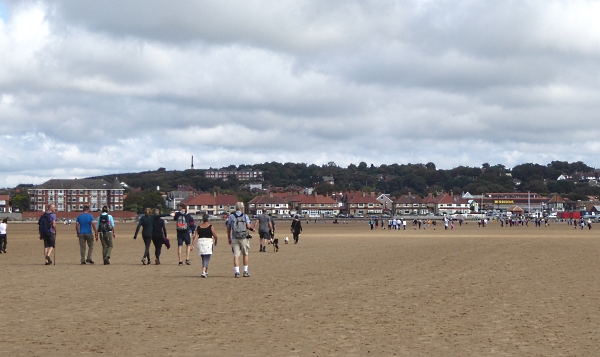