From Seaforth and Litherland Station we went over Princess Way by the footbridge and into the southernmost area of Rimrose Valley. Wayside trees were showing small flowers, but they weren’t Blackthorn and the bark didn’t look like Cherry, so perhaps more Cherry Plum. 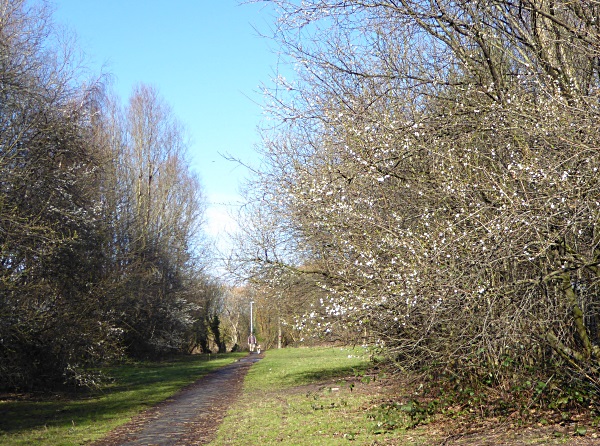 There were Long-tailed Tits and Great Tits in the hedges, and then a Kestrel flew overhead, scattering the small birds. We’ve had some heavy rain in the week, and the paths in this wilder low-lying section of the Rimrose Brook valley were quite muddy and some quagmires were quite hard to get past. There’s a Ranger station here, and they’d been netting birds to do some ringing. One ranger went inside, collected a little cotton bag, and drew out a Kingfisher. It was a female, and much tinier than some of us expected. They said it was only the second one they’ve ever had in the park. 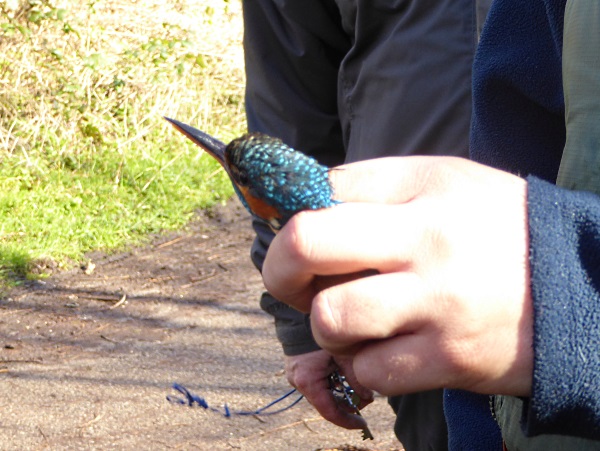 Then we got to the wide open area with the tarmacked paths. There were plenty of Magpies, a Jay flew across, and we saw a Greenfinch. High above us a female Sparrowhawk cruised about. They have large territories, so she might be the same one as was in my garden a year or two ago. I spotted a Sparrowhawk kill site last week in Victoria Park Crosby, looking like it was the plucked feathers of a Collared Dove, which might have been her work too. A pair of Canada Geese flew over and not long afterwards five Mute Swans came over in the opposite direction, south westwards, towards Seaforth or even New Brighton. What a wonderful creaking sound their wings make! 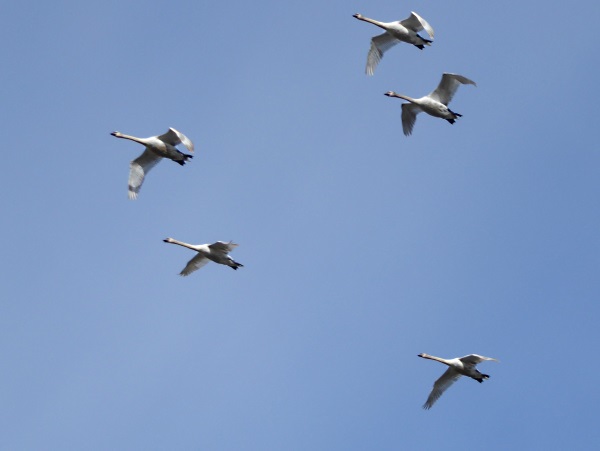 There was a very scruffy-looking clump of yellow flowers on the grass. Could it have been Charlock, also known as Wild Mustard?  The flowers and seed heads look like the pictures in my book. It is said to be an annual, flowering from April to November. This was too well grown for this year’s germination, so perhaps it was a survivor from last Autumn. 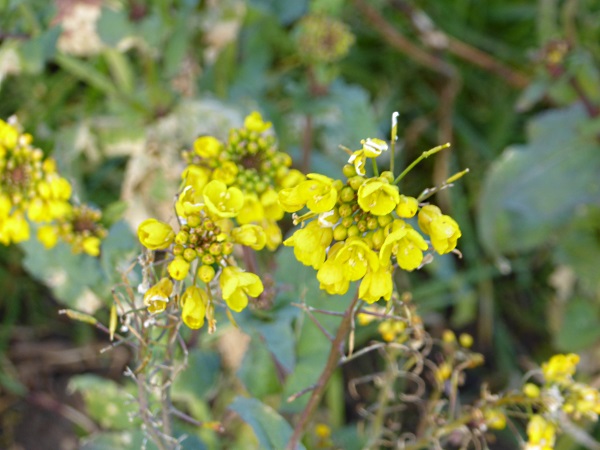 North of Ford, where the path curves eastwards, there was lots of standing water on either side of the path, with reeds, Alder and Willow, and looking quite swampy. Frogs had been spawning already. 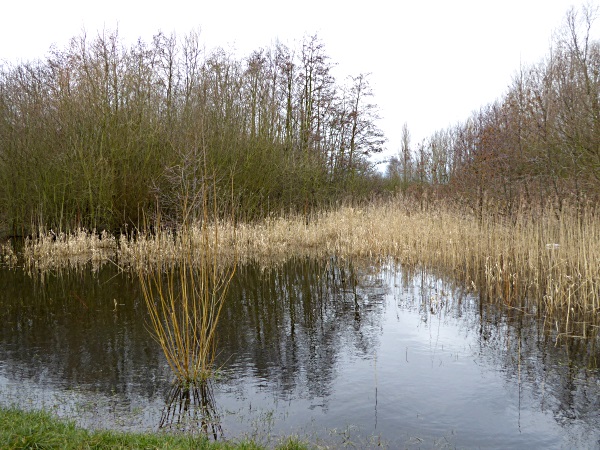 Near Cookson’s Bridge there was a Wren in the bushes and one dead tree had this white blobby “fungus”, looking like someone had thrown a tablespoonful of rice pudding at it. Was it the delightfully-named Dog Vomit slime mould? 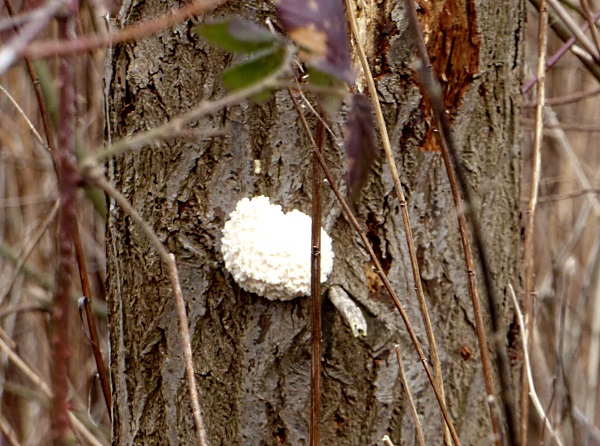 We walked back to Seaforth along the canal. The water was very high and the barge Pride of Sefton 2 passed us on the way into Liverpool. There were Goldfinches in the trees and a Dunnock was sitting out in the open and singing its spring song. Blackbirds, Chaffinches and Collared Doves were also about, and a Robin with a BTO ring on its right leg watched us from the hedge. Did the local Rangers ring it? 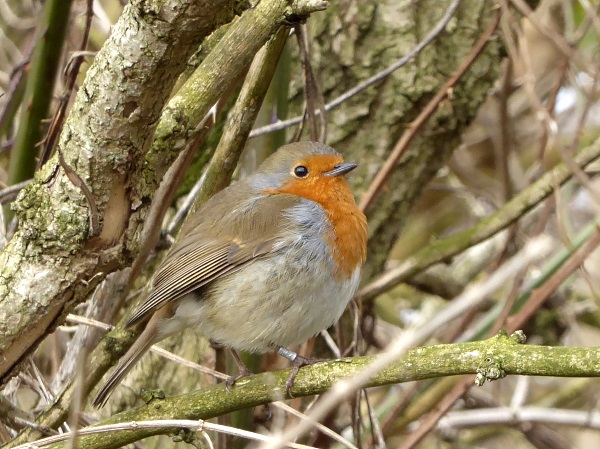 There seemed to be more Moorhens than Coots on this stretch of the canal, although the Coots were chasing them aggressively. A pair of Mute Swans were also getting territorial, with the cob chasing the Canada Geese. About a dozen Black-headed Gulls and some Mallards congregated where a family with a toddler was “feeding the ducks”. A Cormorant flew northwards, low over the water, in full breeding plumage. 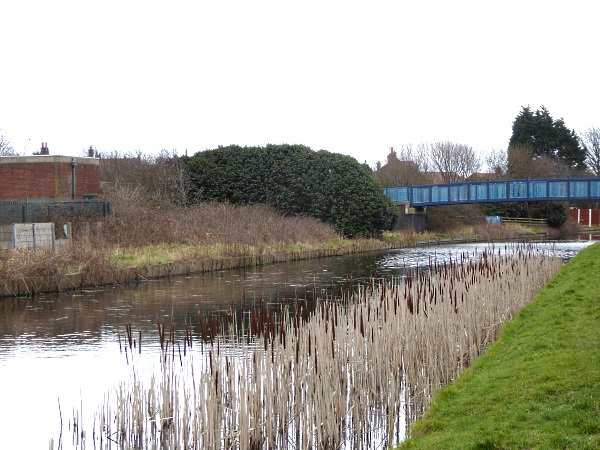 We had already seen some Hawthorn leaves coming out, but one aberrant bush was already just starting to flower. The blossom is called “May”, so this plant is two months early! 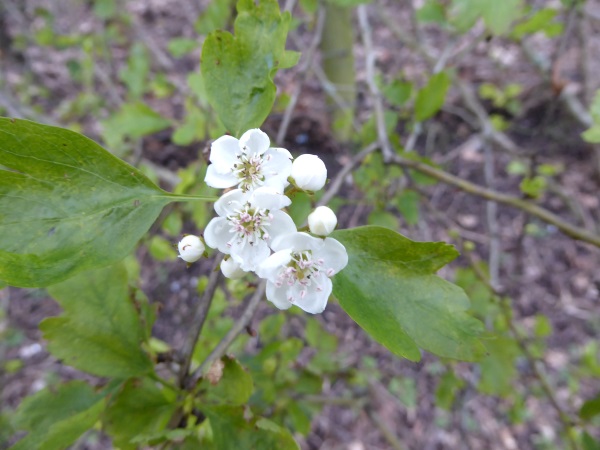 Our Tree of the Day was a European Larch Larix decidua in flower. The female flowers are crimson fireworks about 2cm (under an inch) high. They grow upright, of course, this one is at an angle because I pulled the branch down. The male flowers look like unripe blackberries about 1 cm (less than half an inch) across. They grow on the same tree, but branches bear either mostly male or mostly female flowers. 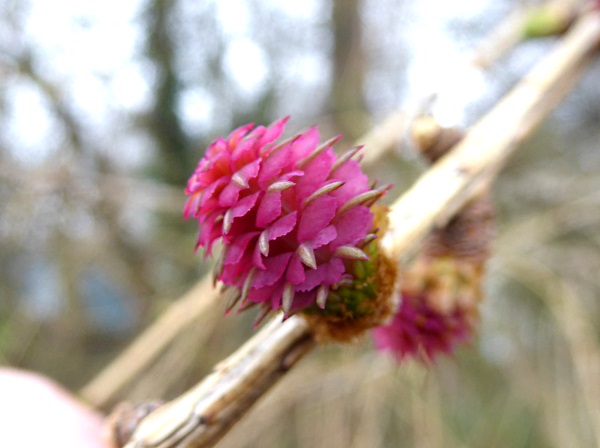 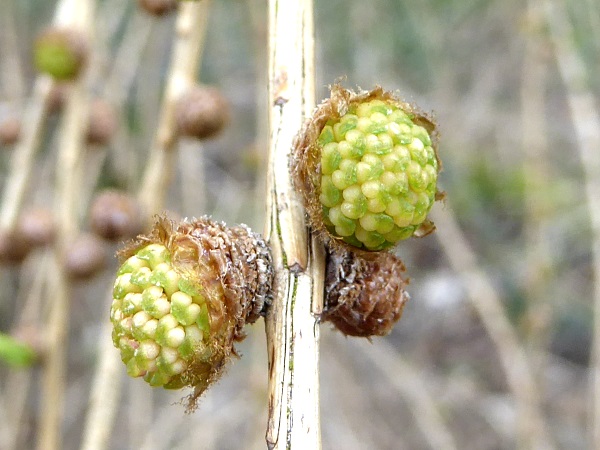 We amused ourselves on the way back to the Red Lion by admiring the decks and steps on the other side of the canal. Are they all legal? we wondered. One householder had decorated his fence like the side of a narrow-boat. 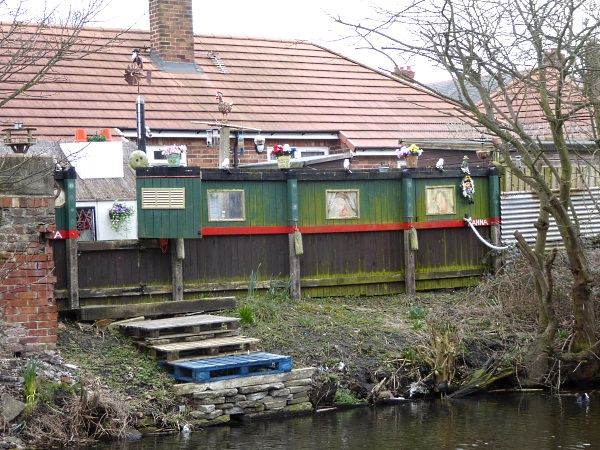 Public transport details: Bus 53 at 10.05 from Queen Square, arriving outside Seaforth and Litherland Station at 10.31. Most of us returned from Bridge Road / Linacre Road on the southbound 53 at 2.25, but I caught a bus in the opposite direction to get back to Crosby.