Chester FC were playing Tranmere in the Conference Premier league, which counts as a ”derby” match, so the train to Chester was very full and the station was teeming with yellow-jacketed policemen and women, one armed with a video camera. We walked down City Road, Russell Street and Dee Lane, and into the north-east corner of Grosvenor Park. It was cold and still with occasional brilliant sunshine. 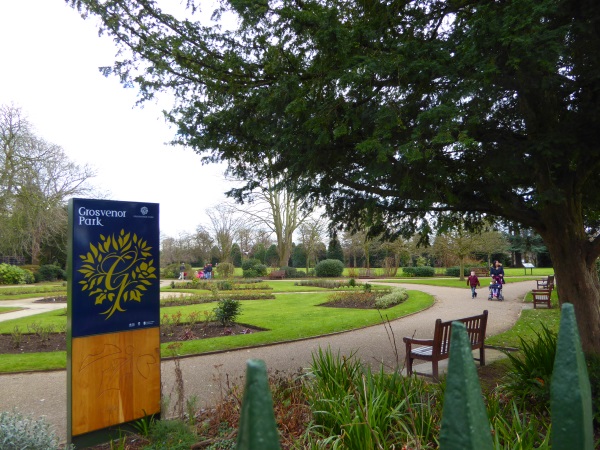 Birds spotted in the park were Blackbird, Song Thrush, House Sparrow, Wood Pigeon, Long-tailed Tit and Robin. Grey squirrels were all over the place. We heard a Great Spotted Woodpecker drumming and a Great Tit and a Greenfinch calling, but we didn’t see them. The best bird of the day was a Raven flying high overhead, which is the 46th bird species on our modest year list. There wasn’t much doing in the way of spring yet, although this blooming Quince was a welcome splash of colour. 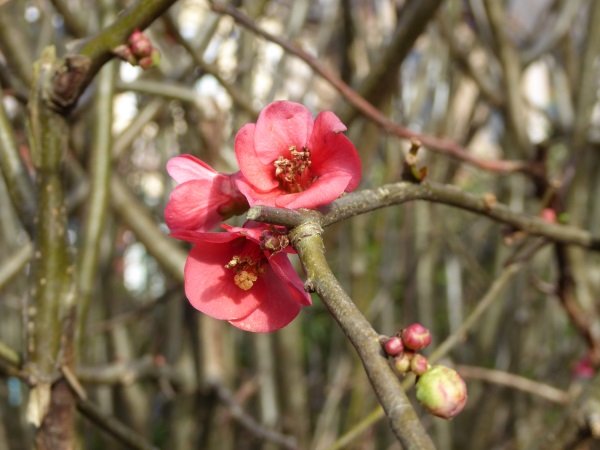 I stopped to look at this bush, which said “Alder” to me at first because of the profuse catkins. It caught my eye because of how tortuous the branches were. But of course it isn’t an Alder, it’s a Corkscrew Hazel Corylus avellana ‘Contorta’, also known as Harry Lauder’s Walking Stick. They have a special visitor direction sign for the one at Bodnant, but this one was just sitting quietly and uncelebrated beside the path. 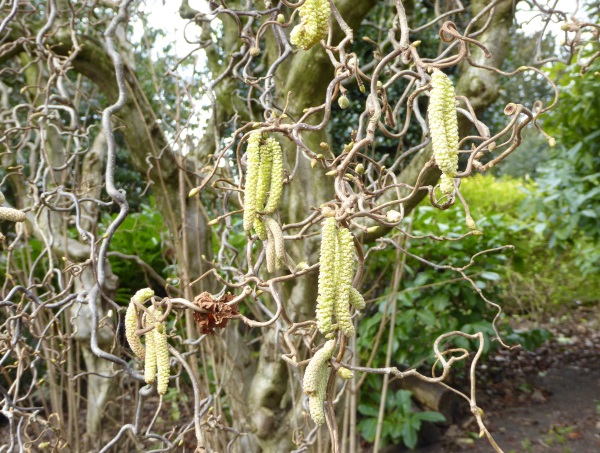 I also took a good look at the Yews. I know the male Yews are covered with obvious small globular male flowers at this time of year. Here they are. 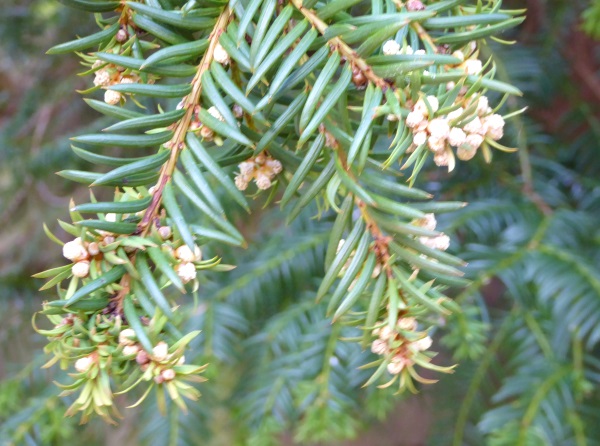 But what are the female flowers like? After much rummaging around the apparently bare trees, which must be the berry-bearing females, I found these inconspicuous little structures, rather like infant acorns, but only two or three millimetres across. 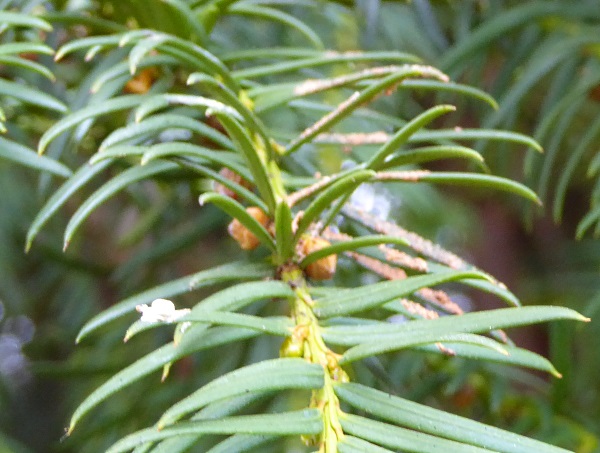 A large number of trees were pruned rather oddly into a tall narrow tufty shape. They had “sprouty” areas at the bases of their trunks, also carefully trimmed, so I think they must be Limes. They have a famous “Lime and Holly avenue” leading to the statue of the Second Marquis of Westminster, and you can see them in leaf on the Cheshire Now website.  It shows what the strange pruning is for, to give a double row of contrasting nicely-shaped trees. 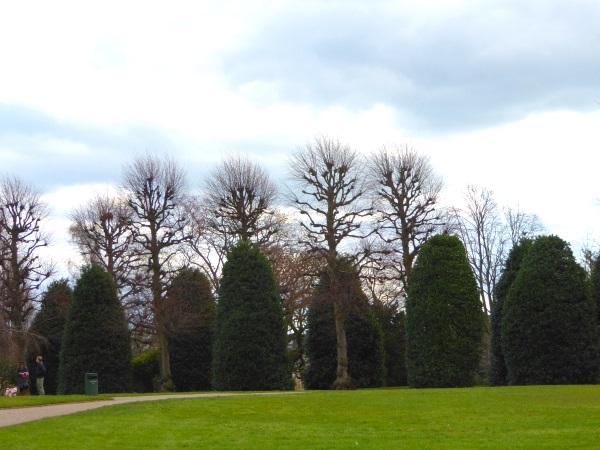 Other interesting trees were a Weeping Beech, several Blue Atlantic Cedars and a couple of Himalayan Cedars (Deodars). There’s probably a Cedar of Lebanon there too, but we didn’t come across it. This Deodar has a very complex branching heart, which must be a great temptation to climbing children. 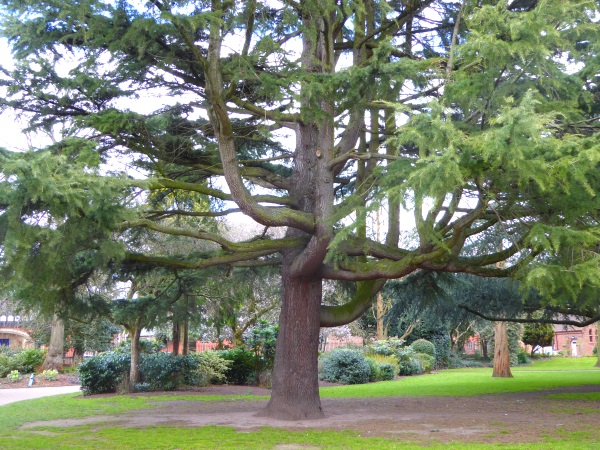 After lunch we strolled down to the River Dee and The Groves.  Nothing very exciting on the river – Black-headed Gulls, a Cormorant, a Moorhen, two Mute Swans, some Mallard, juvenile Herring Gulls, and this Common Gull posing on the prow of yacht. They are very like Herring Gulls but have greenish legs, not pink ones, a dark eye and a gentler expression. 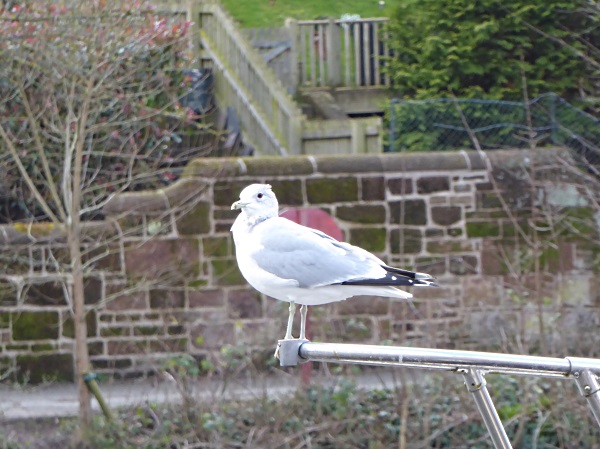 In the porch of St John’s Church stood the Chester Giant, set on a wheeled base and dressed in the livery of the Freemen and Guilds. It is used in their processions. 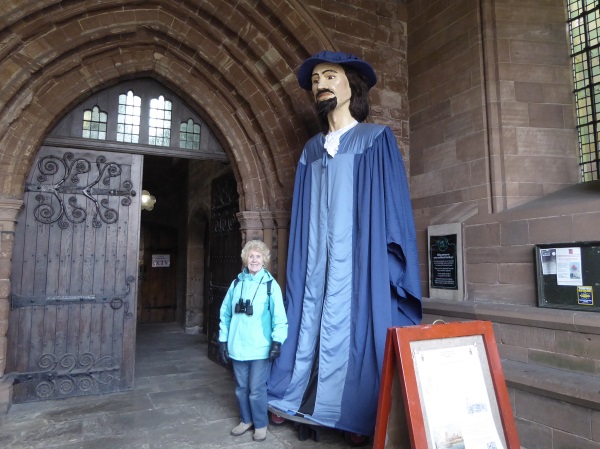 I tried to claim this Golden Eagle for our bird list, but was shouted down. 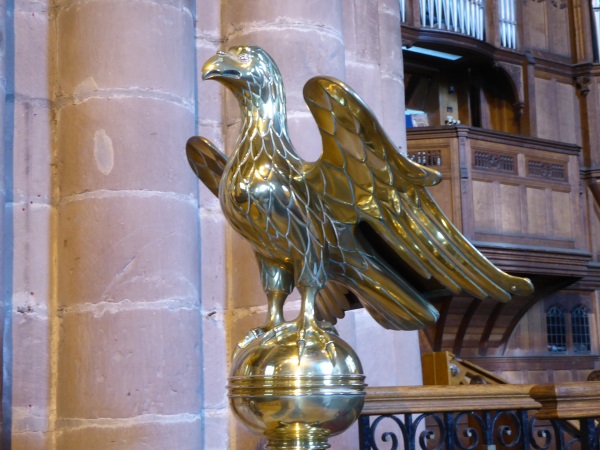 In Bath Street one of the houses appears to have a fruiting lemon tree growing outside its blue door. Is this another result of last year’s hot summer?  (And as a nod to Game of Thrones theorists –  here’s the evidence Lemon Trees DO grow in Braavos!) 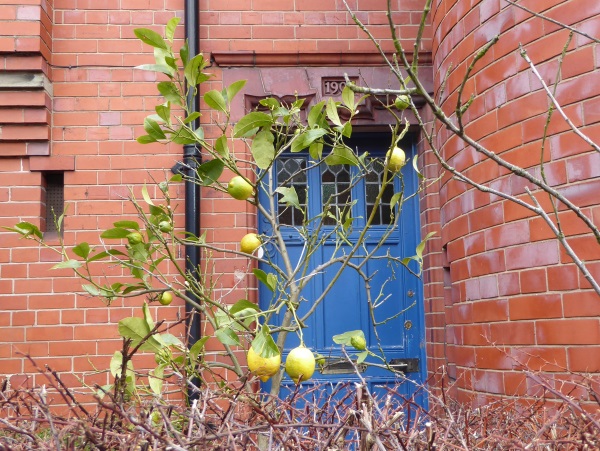