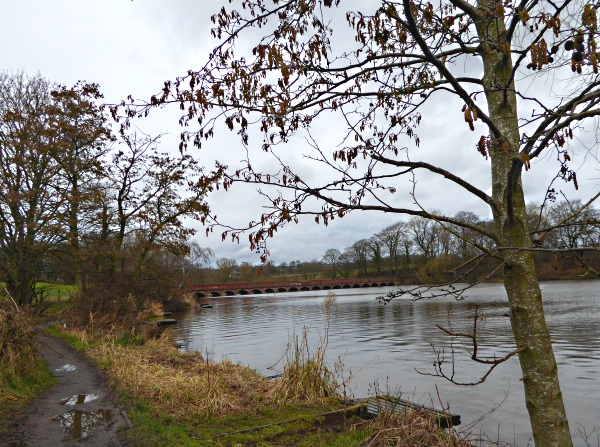 As usual at this time of year, it was muddy and squelchy underfoot but there was always a way around the mini-quagmires.  There were a few Snowdrops out, some wind-blow Daffodils struggling to bloom and the leaves of Wild Garlic were showing through. One very sluggish Bee was blundering about, perhaps just woken up by the surprisingly mild day. On the lake were Coots, Moorhens, Black-headed Gulls and many Canada Geese, parallel-swimming and honking. Are they males challenging each other or is this courtship behaviour?  The Great Crested Grebes were very far out, but we hoped to see some of them courting too, in the secluded bays. 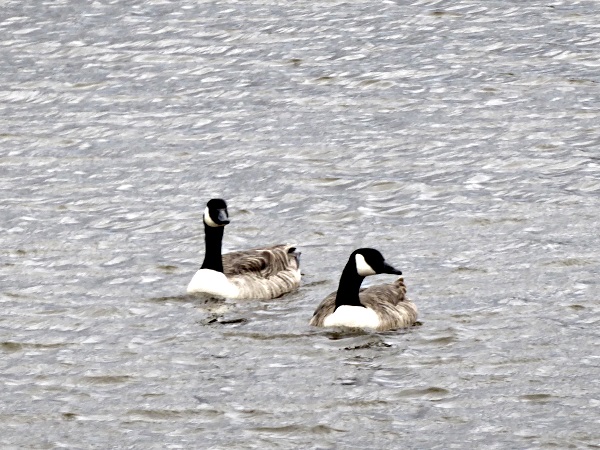 A tree had been very neatly cut down, showing the very dense wood and tightly-packed rings. It was at least 100 years old, the annual rings showing very clearly when magnified through the wrong end of binoculars. 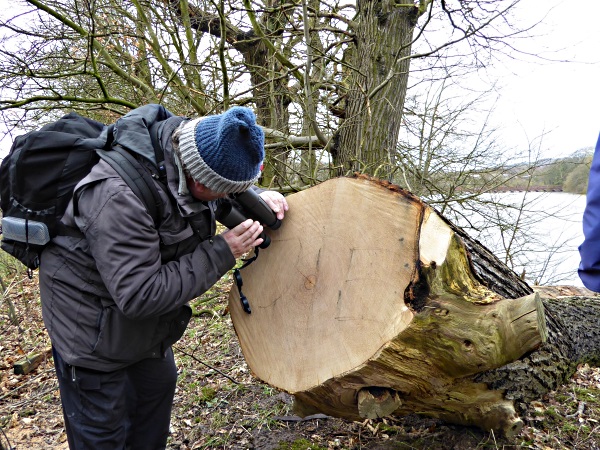 We lunched on the old railway bridge. A Chaffinch was pecking at some seed left out on the parapet, a Buzzard flew over and there was a Blue Tit in the shrubs. A juvenile Grey Wagtail perched briefly on a post then flew off into the bushes. We looked for a Kingfisher, because we often see one here, skimming low over the water, but had no luck. We met a couple later who said they HAD seen one there, probably just after we left. On the far side of the bay beyond the bridge were two Herons, one on the bank and one hunched up in a tree. 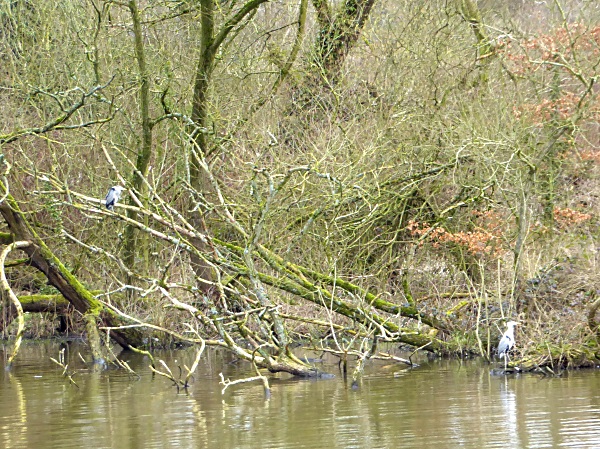 A lady had preceded us on our circuit, putting out bird seed here and there. In the swampy area where there is a bridge over the Goyt, Long-tailed Tits were coming to seed, as well as Great Tits and a Coal Tit. We heard a Nuthatch but it didn’t show itself. Below the bridge was a clump of Lesser Celandine. 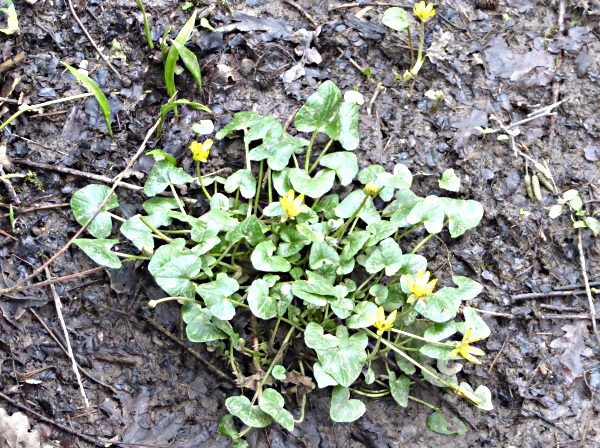 In the fields beyond, the Moles had been busy, leaving long trails of molehills. In a sheltered spot behind the Lancashire Powerboat Racing Club the first, very early Hawthorn leaves were out. 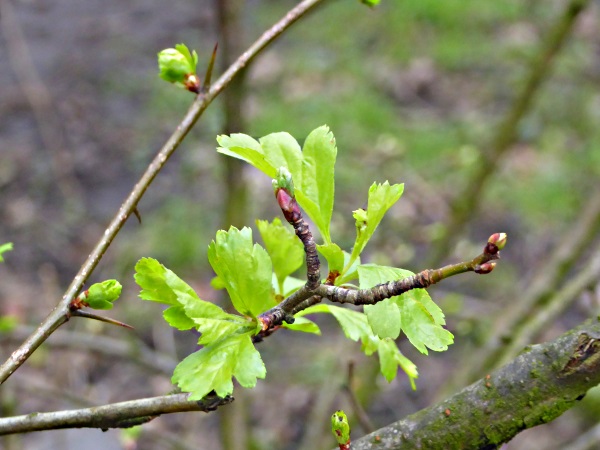 We spotted a Treecreeper on a tree on the embankment. 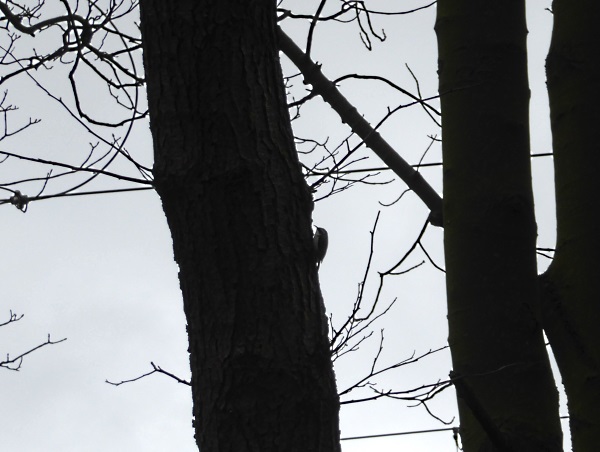 A Song Thrush was singing very loudly in the hedges, but we couldn’t find it until it stopped singing and flew away. There was a large carpet of Snowdrops in the front garden of the Powerboat Club. 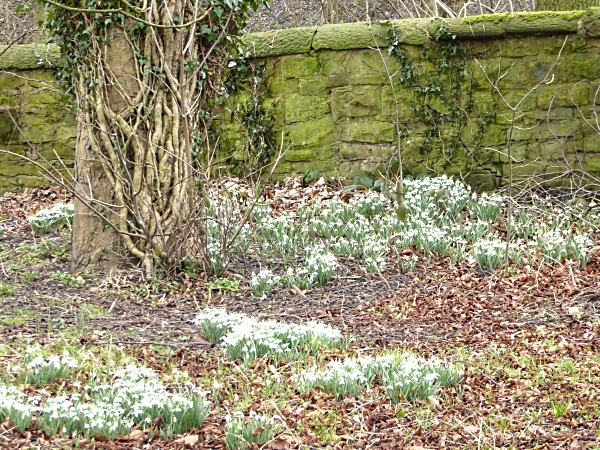 And the Great Crested Grebes? Many adults and juveniles were just mooching about in the middle of the lake, apparently not the slightest bit interested in courting or dancing. Disappointingly, we appear to have come too early. Perhaps the nesting pair we saw in Stanley Park last week were just randy scouse gits! 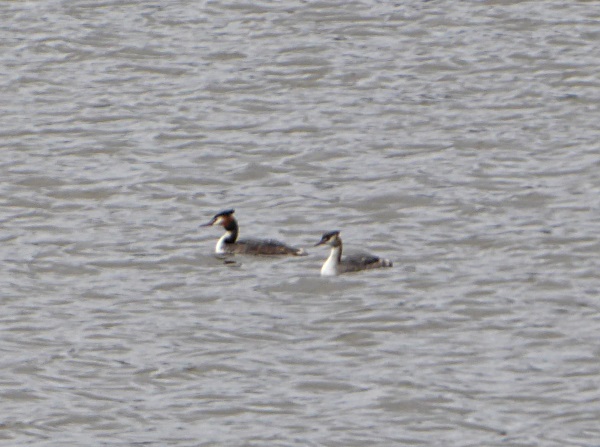