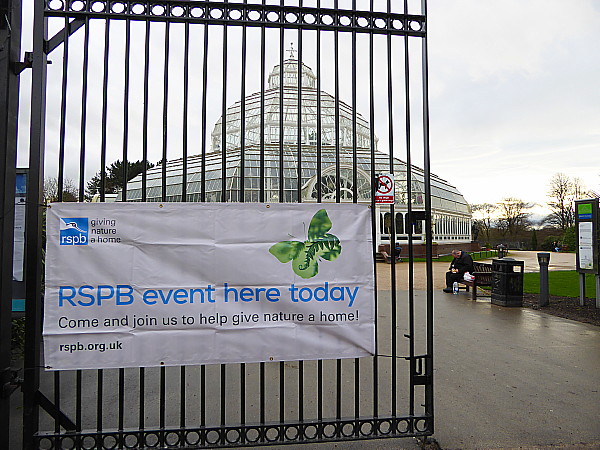 The RSPB were having a “Feed the Birds” day at the Palm House, which seemed like sufficient excuse to visit the park again. It was a very mild day, all of a sudden. What a change from last week’s freeze!

There is a fine group of youngish Italian Alders at the southern entrance, with large cones from last year, and this year’s catkins well on show. 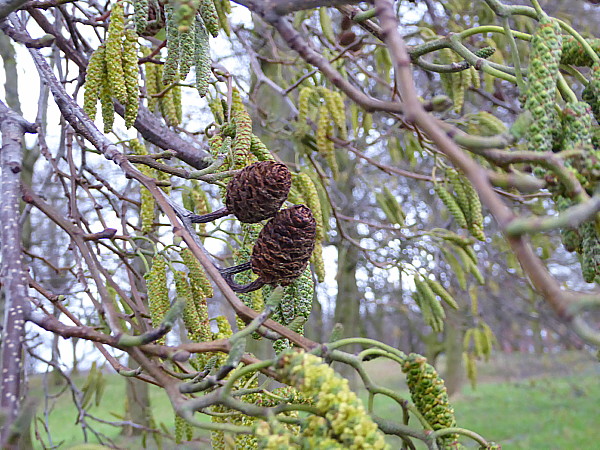 Lake (and lakeside) birds were the usual Canada Geese, Mallards, Coots, Moorhen and Feral Pigeons, with many Black-headed Gulls, one with a fully black head. We saw only two Mute Swans, but we saw the rest of the family later. All six cygnets are still hanging out with their parents, but it can’t be long now until they are driven off. There were a couple of Little Grebes on the water near the island. We noticed several groups of young Turkey Oak trees, perhaps five or ten years old. 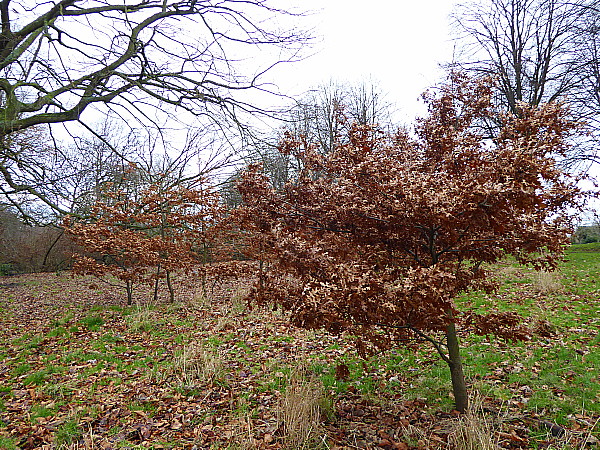 Their deeply-indented leaves were still thick on the trees, in the way of young Oaks, and they were positively identified by their whiskery buds. 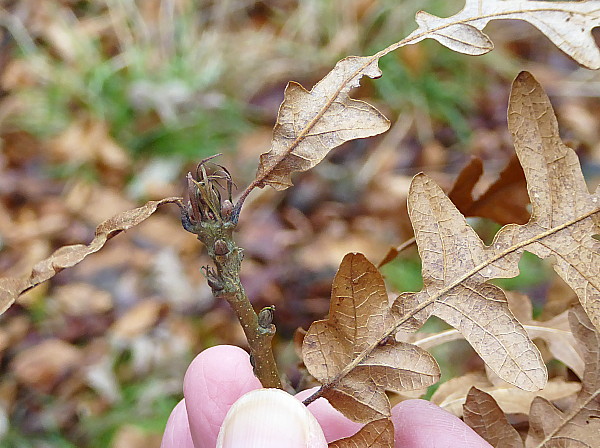 There are very many fine old trees in the park, which are possibly original 1872 plantings, but there are far fewer young ones. Will there be a tree crisis in Liverpool parks one of these days?

On the island next to the bandstand is a variegated Holly tree, with some dark green sections. Has part of the tree reverted, or is there another tree behind it? We found that the gate to the bridge was open, so went to look. Although multi-stemmed, it is all one tree, with yellow-margined and dark green leaves mixed together at the back. 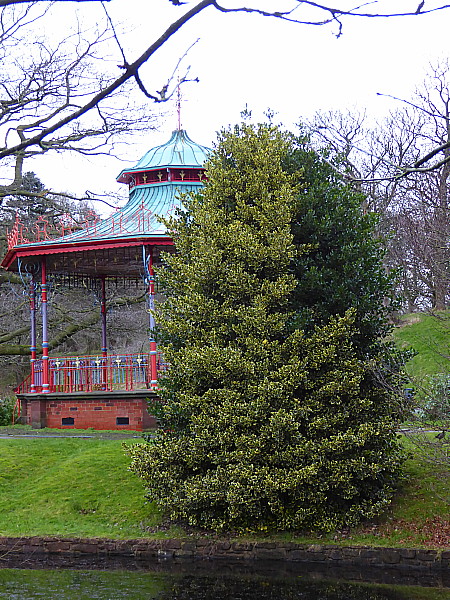 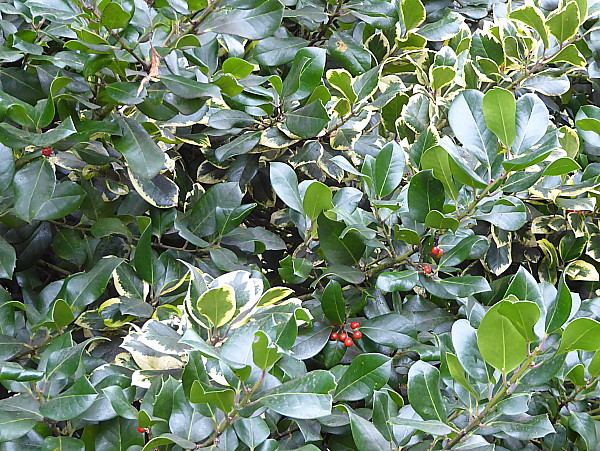 Nearby was a Weeping Ash, and on other side of the path a Witch Hazel (Hamamelis sp.) which was in spectacular bloom. It’s nothing to do with the ordinary European Hazel, it’s from a group of North American and Asian species. The old English name “Witch Hazel” was originally used for Wych Elm, and the early American settlers borrowed the name for the shrubs they found. 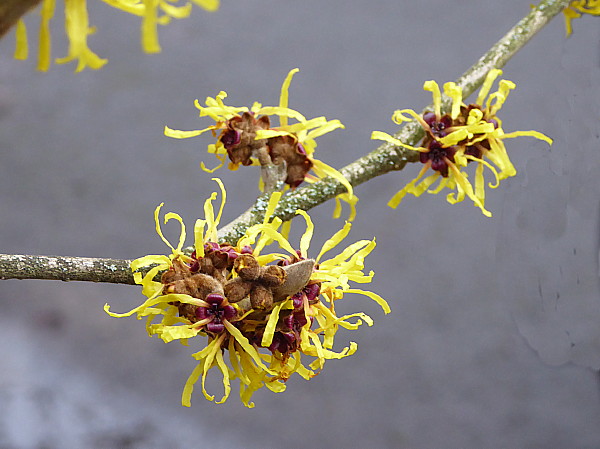 Near the old bowling greens John saw a Great Spotted Woodpecker, but it flew off before the rest of us could catch it. There were Magpies, Crows, and Buzzard, which flew into some dense trees and set all the Crows to cawing. After lunch outside the old aviary we walked northwards along the middle lake to look at the Dawn Redwood with the figured trunk. Then we spotted a weeping tree on the far bank, serving as a handy perch for BHGs and a Moorhen, but not apparently a Weeping Willow (it was grey not blonde) nor an Ash (no bunches of keys). We walked around to it, and it turned out to be the uncommon Weeping Beech, with a very few leaves still clinging on and slim buds just staring to swell. 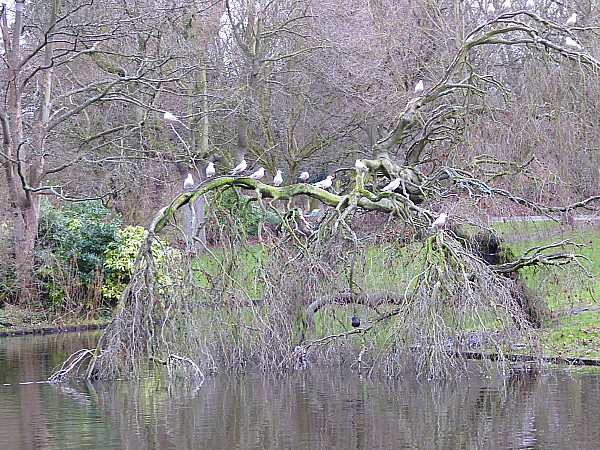 On that same east bank were some sections of a cut-down Beech, with lovely curly yellow fungi. 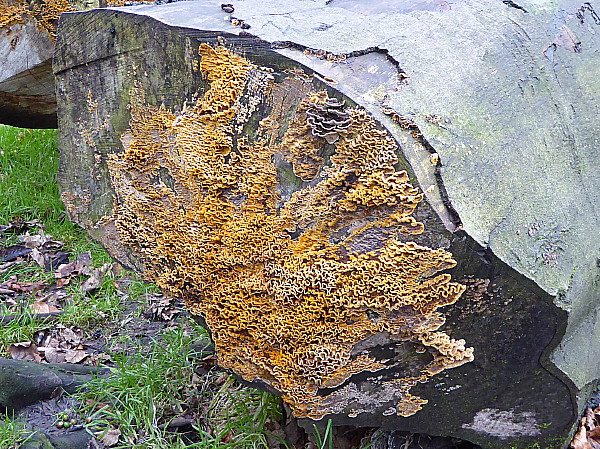 Then to the Palm House for the RSPB event. They had a table selling bird food, another with children’s activities. I was amused by the bug hotel labelled “Bugingham Palace”, and also when John agreed to model an Albatross mask. 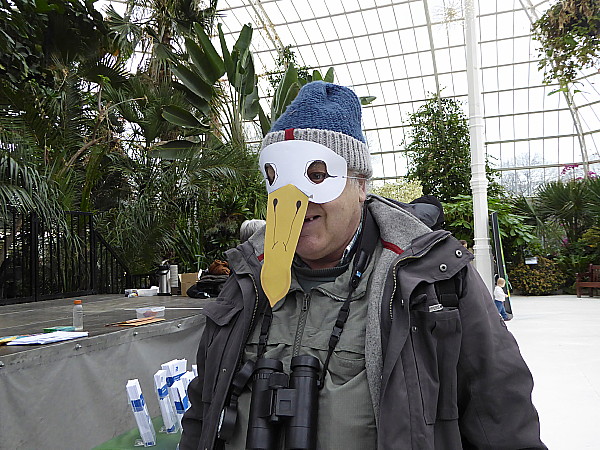 Another table encouraged membership, and was giving away cute cuddly Hedgehogs to new subscribers. I really wanted one, but I’m already a member and they weren’t for sale. I’ll have to look out in the shop at the next reserve I visit. 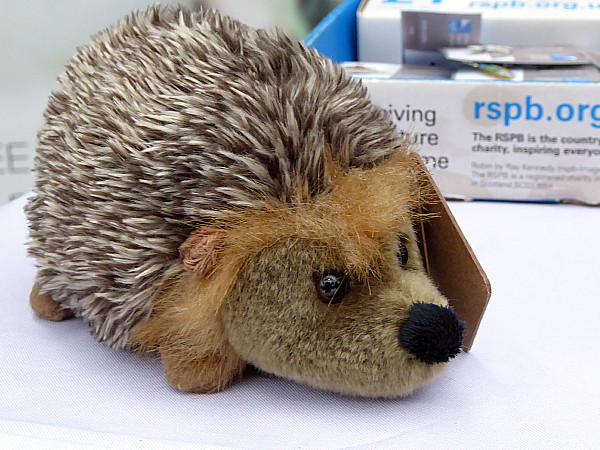 Outside there was a telescope at kid-height, trained on the bird table. We saw Nuthatch, Blackbird and Blue Tit there. There was talk of a Kingfisher seen in the Dell that morning, so we walked that way, noting some Common Gulls and Jackdaws on the big field. We waited near the bridge for a while, but no Kingfisher showed. 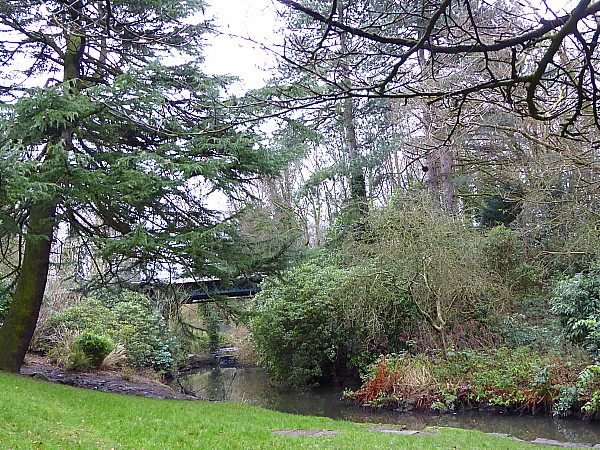 Along the stream there were Daffodils just about to break their buds. Near the bird feeding area we spotted a Long-tailed Tit, and then some Ring-necked Parakeets flew in, appearing to be uncharacteristically shy of going for the apples that had been put out for them. 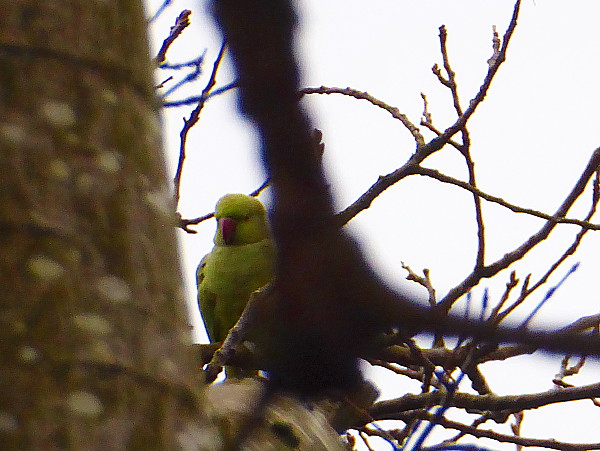 The RSPB’s Chris Tynan was also there with a party, and said that there are thought to be about 20 of the Parakeets in Liverpool. He also said he thought the BHG with the fully black head which we noted earlier had been a Mediterranean Gull. On the way back along the east side of the main lake we failed to see the possible Med Gull again, but we found the female Mandarin Duck, which is another good tick for our year list, now looking pretty good after only two Sunday walks.