There was a high tide of 8.73m due at 12.40, and it was “Wirral Wader Weekend”. Two MNA members, Christine and Seema, joined us for the event. It was a very windy day with squally showers but still very warm: 15°C at 9.15 near North Park, Bootle. 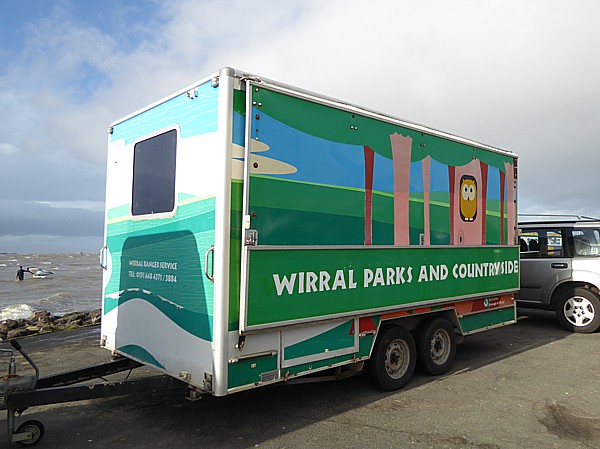 This warm weather has the flowers confused. I saw a Dandelion blooming in town earlier in the week, and my Himalayan Poppies are sprouting new shoots like it’s spring. Near Hoylake Station this Ivy-leaved Toadflax was blooming happily on a garden wall. 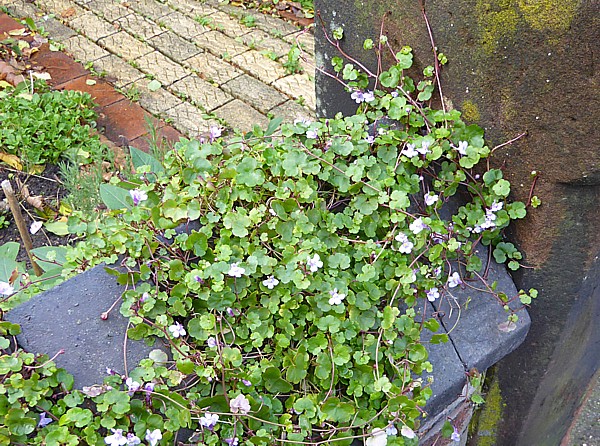 Along Stanley Road, amongst the rustling fallen leaves, we came across our Corpse of the Day, a squashed hedgehog on the pavement. 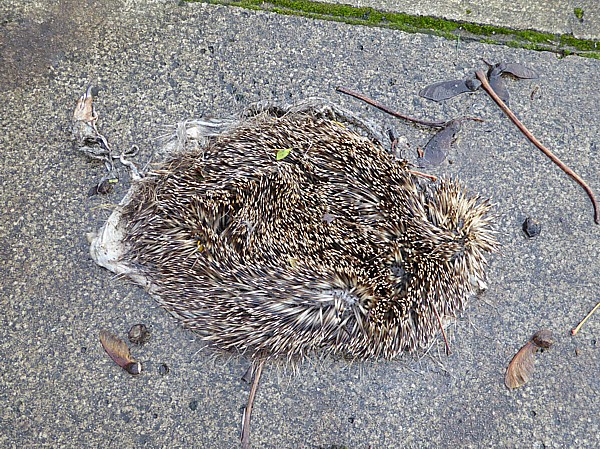 Cormorants were flying by the Red Rocks, but it was so blowy we set off along the coastal path towards West Kirby. The kite surfers were getting their kit set up and a Kestrel took advantage of the same strong wind to hover over the dunes. In the salt marsh we spotted a Curlew, and further along, a Little Egret. 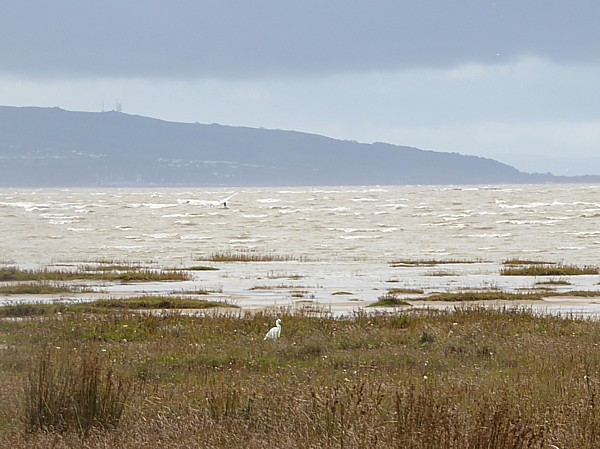 A short squall of rain soon blew over, and didn’t disturb the WEBS counters out with their scopes.  The waders were lined up along the water’s edge; Oystercatchers, hundreds of pale grey Dunlin twinkling in the air as they took off, Knot, a few Sanderling and some Brent Geese. Christine was on the look-out for a leucistic Oyk which she had spotted here on the previous day, then she found it again. I think it’s on the first picture below. Count the back row of Oyks from right to left, then between the third and the fourth, drop down.  There is a white head at the back of the front group of Oyks. 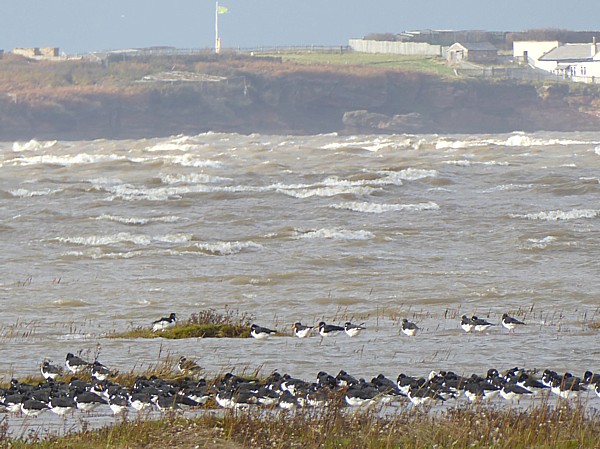 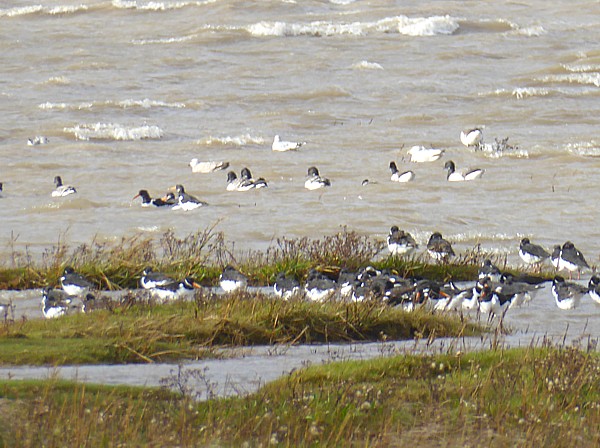 Near West Kirby Margaret went beachcombing in her wellies. She picked up this strand of weed with may kinds of bivalve creatures clinging to it. There was also the test (empty skeleton) of a small Sea Potato, Echinocardium cordatum, only about 6cm across. They live buried in the sand, about 10-15cm down. 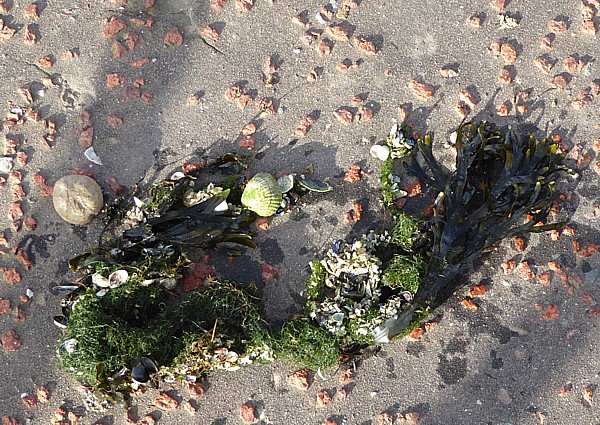 We lunched in the shelter of Sandlea Park, where a Pied Wagtail strutted across the path. Above the roofs was an amusing weather vane in the shape of a fox. 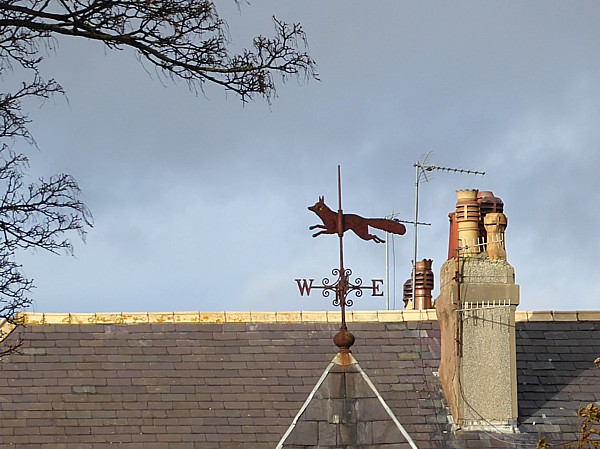 There were leaf miners in the Holly. They are the larvae of the fly Phytomyza ilicis, and there is no problem identifying them, because there is only one species which lives on Holly in the UK. Up to three larvae will mine from a single deposit of eggs, and this leaf seems to have three, possibly even four. The tunnels aren’t very long, though. Apparently some larvae will hatch through a small round hole, some will be attacked by a parasitic wasp and some will be pecked out by Blue Tits, which leave triangular beak-shaped holes in the leaf. Must look more closely next time! 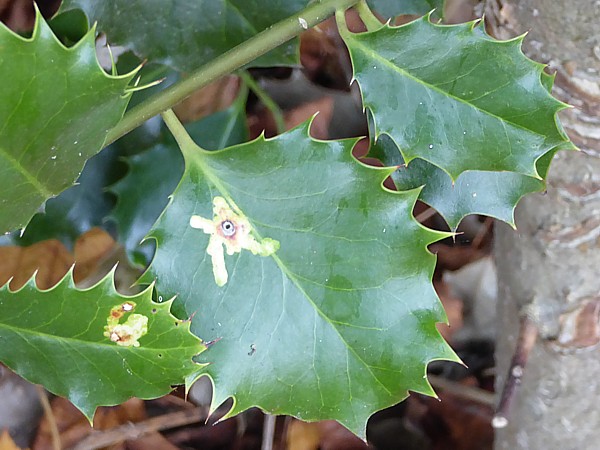 Some of us went back to Dee Lane Slipway to join a ranger-led walk, but the less hardy made for home.

Public transport details: Train from Central Station towards West Kirby at 10.05, arriving Hoylake station at 10.30. Returned to Liverpool on the 13.31 train from West Kirby, arriving Liverpool central at 2.05.