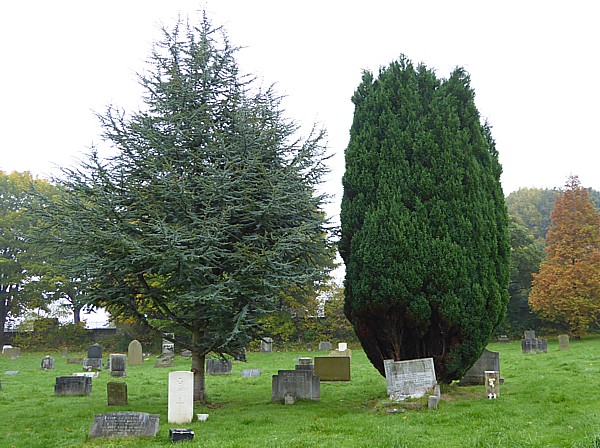 It was a very damp and misty morning. “A fine soft day” as the Irish say. Around the entrance off Boundary Road, on either side of the old chapels, is a large collection of Lime trees. Many are Silver Pendent Limes Tilia petiolaris, two of which are County Champions for girth. In the same area there are said to be both Large-leafed and Small-leafed Limes, which we were keen to identify and distinguish.  Large-leafed is supposed to have 5-ridged seeds but none of the candidate trees had any seeds at all, and all we saw were trees with little pumpkins, which I’d call 5-lobed, not 5-ridged, and which I think belonged to the Silver Pendent Limes. We did, however, identify a Small-leafed Lime Tilia cordata by the tiny orange tufts in the vein axils on the underside of the leaves. 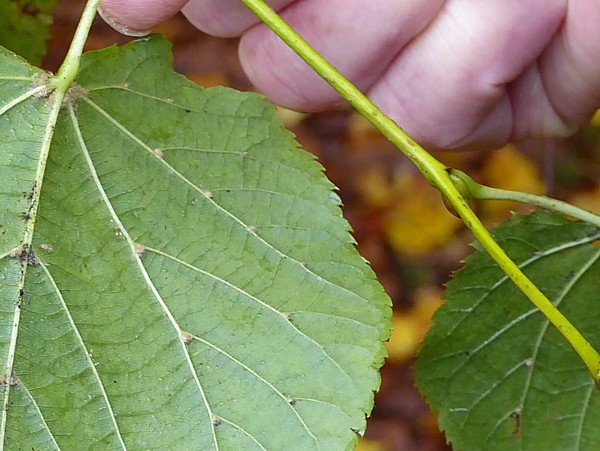 Next to Boundary Road, south of the chapels and probably in section NC6A, was a very dark purple-leafed young tree, with a sign saying it had been planted in May 2003 to celebrate the 75th anniversary of the Wirral Society. Sadly, it wasn’t identified, but it looks it could be a Copper Beech, variety ‘Rivers Purple’. (No, it wasn’t a Beech, it was a Purple-leaved Plum Prunus pissardi  ‘Nigra’. Thanks to John Moffat for putting me right.) 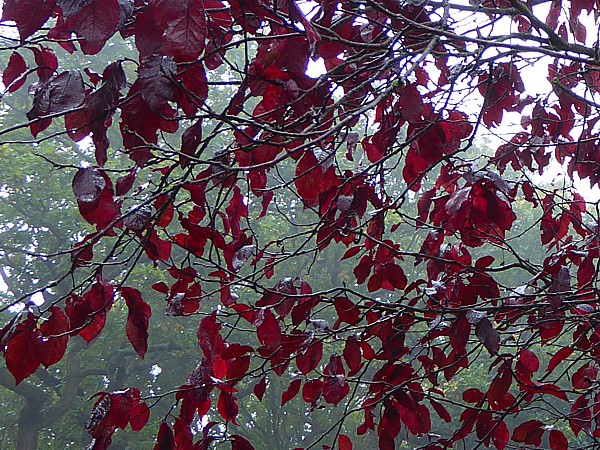 On either side of the main east-west path, at the east ends of sections NC2 and CE2 is the  magnificent pair of Cut-leaved Beeches Fagus sylvatica ‘Heterophylla’. One is the County Champion for girth. 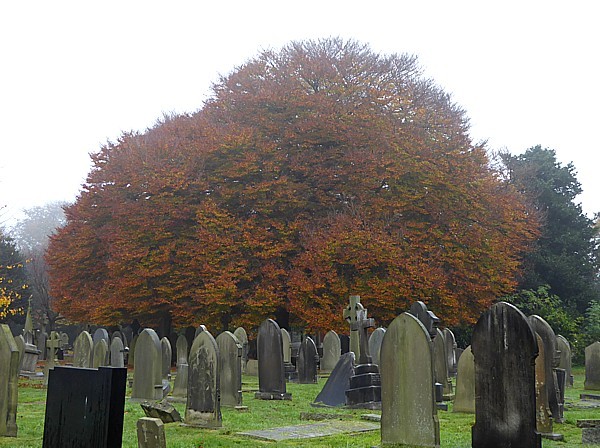 They are chimeras, with inner tissues of ordinary Beech overlaid by tissues of the Cut-leaved form. If a branch is damaged, ordinary leaves will appear. Bob Hughes told me once that someone had set fire to an abandoned car under one of the trees some years ago, and now that side has reverted. Both pictures below show foliage from the same tree, the cut-leaved and the reverted forms. 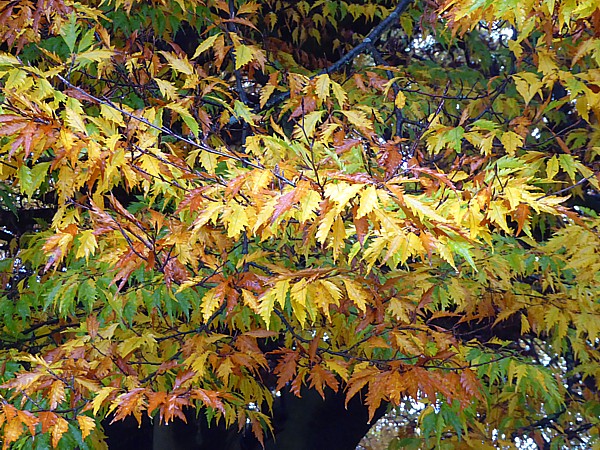 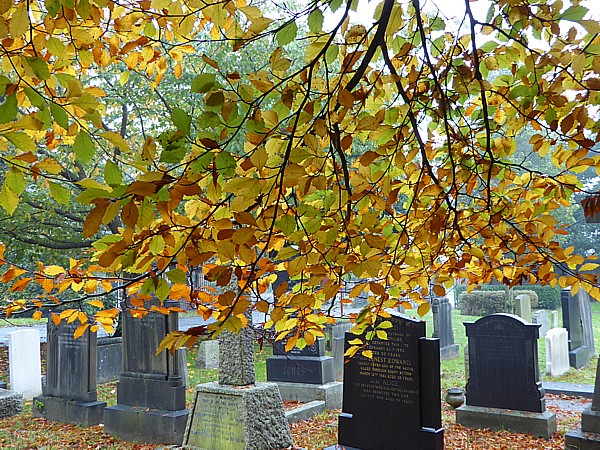 One Sweet Chestnut had a very good crop of fallen nuts, but none were really big enough to be edible. But while we were looking underfoot, we noted some bright yellow Waxcaps in the damp mossy turf.  Many of the tree stumps were covered in fungi, too. 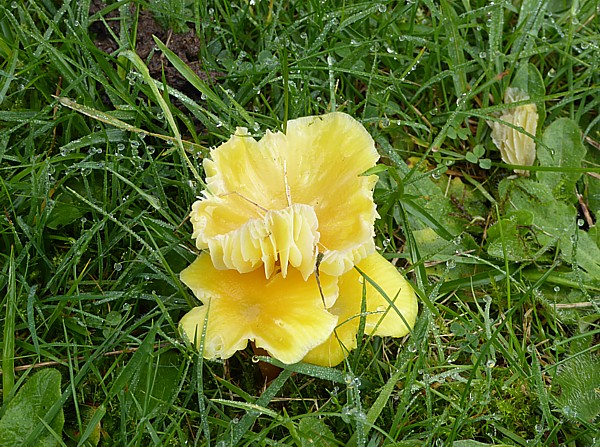 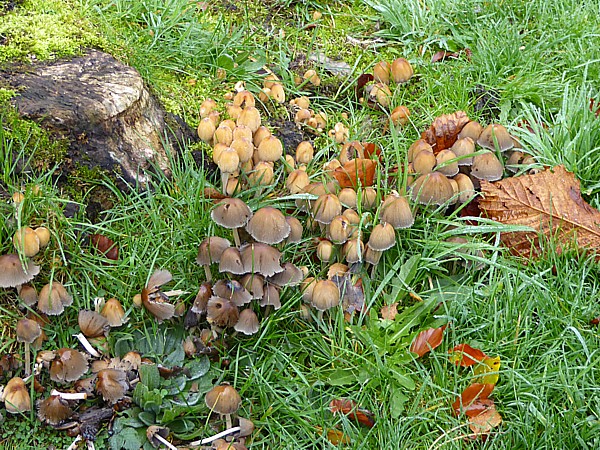 There weren’t many birds in the cemetery, just Blackbirds and Wood Pigeons. They were all at the bird feeders in Tam O’Shanter. We spotted Blue Tits, a Coal Tit, a Chaffinch doing its best to reach the food, although it’s usually a ground feeder, and a Nuthatch. 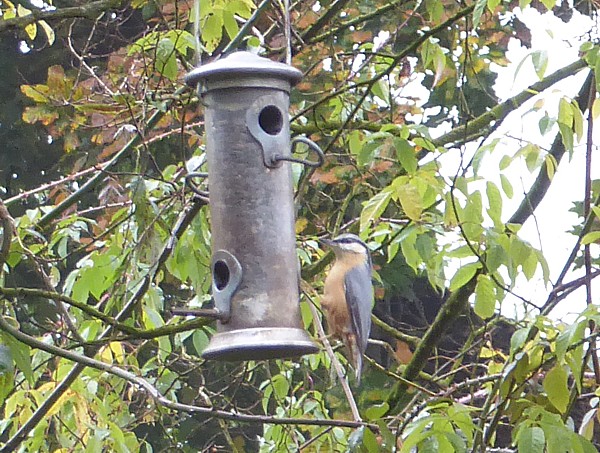 We put mealworms on a stump, and attracted Magpies and a Grey Squirrel, which is thwarted at the bird feeders by the serious baffles they have put up. It seemed happy to get an easy meal. 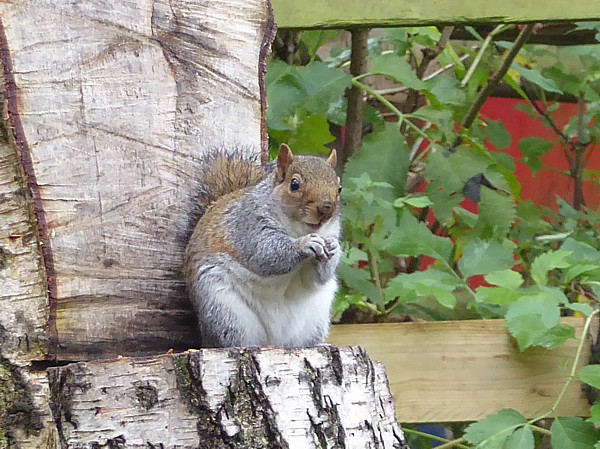 There was a display of rescued Birds of Prey, probably by the same people we saw at Southport last year. Some of the birds were the same – the Barn Owl and the European Eagle Owl looked familiar, but they also had a Harris Hawk, a Snowy Owl and a cute White-faced Scops Owl. 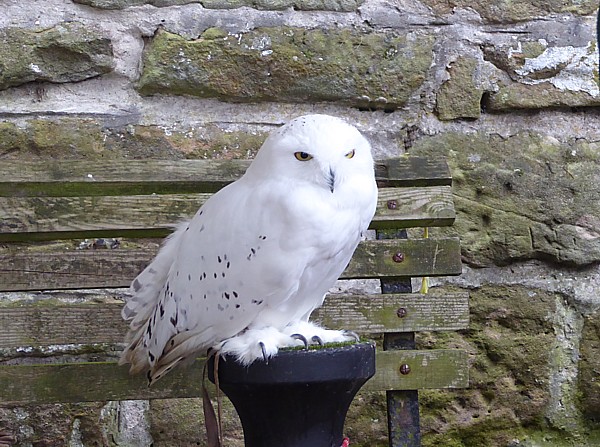 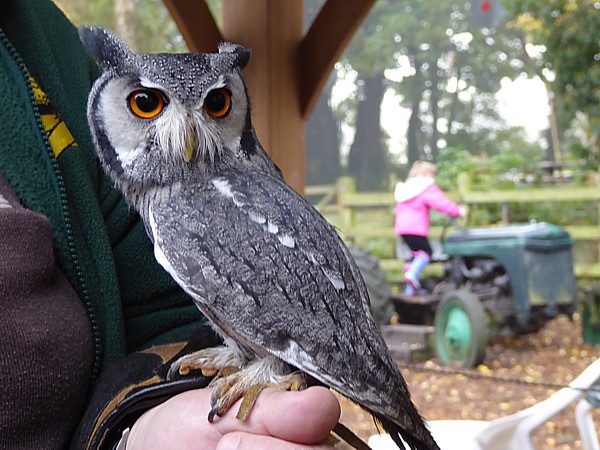 Back in Flaybrick, we finally found a Large-leaf Lime. Still no seeds on it, but the leaves were definitely large and “cabbagey”. 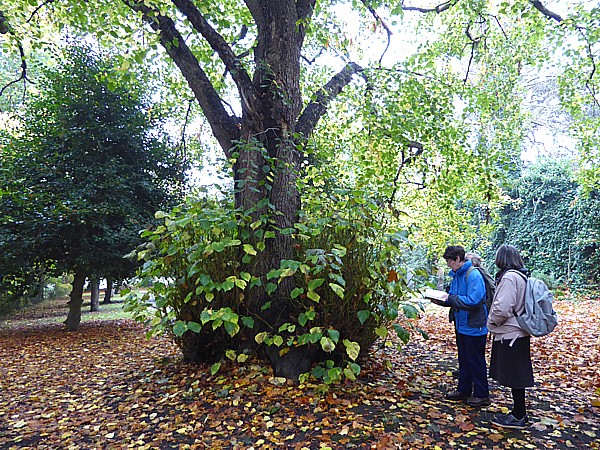 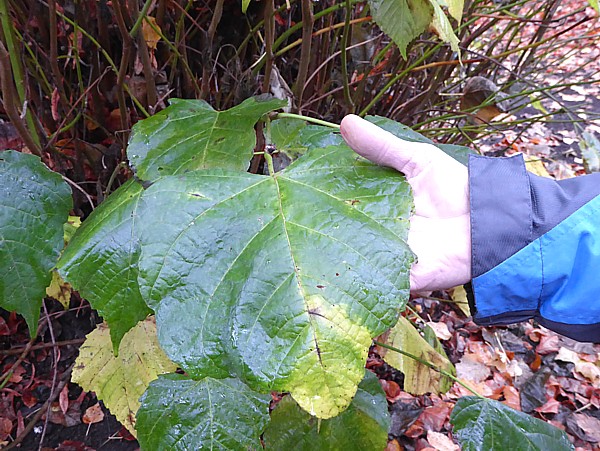 They have planted a “Sorbus avenue” on either side of the path between sections CE17 and CE13, with ten different rare Rowans and Whitebeams. I had hoped to see the white-berried Hupeh and Vilmorin’s Rowans, but there were only red-berried trees, although some had no berries at all. Perhaps they are still too young. In section CE17 there is a young Blue Atlas Cedar next to an Irish Yew, looking very smart indeed (see the picture at the head of this report). The supposed Black Walnut Juglans nigra marked on the plan in section CE14 looked much more like a Common Walnut Juglans regia with pale grey bark and leaves with seven leaflets. 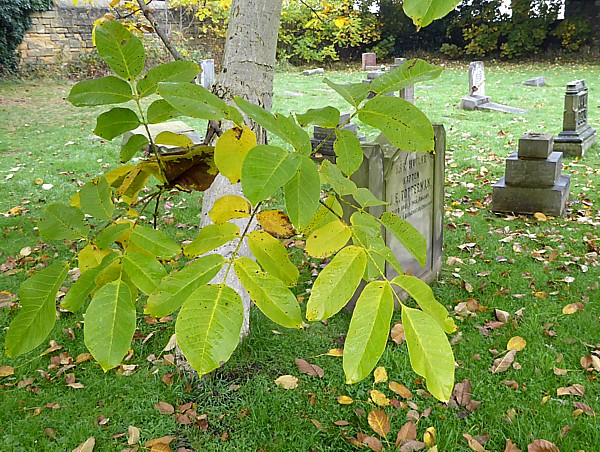 At the west end of section CE14 was a young tree that looked like a Maple at first sight, but the fallen leaves were aromatic when they were crushed. It was a Sweet Gum Liquidambar styraciflua. 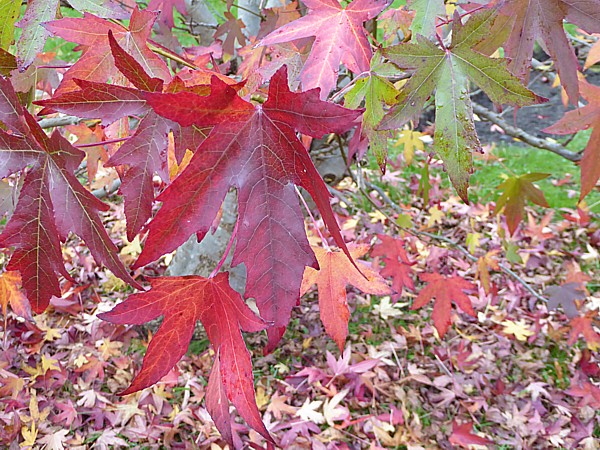 There was a genuine Red Maple Acer rubrum further on, which had lost most of its leaves, but they were a magnificent wine-dark red. 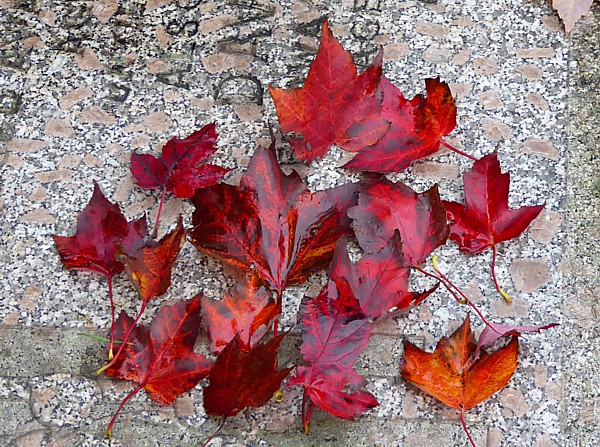 Opposite the Red Maple, on the south side of the path in section CE12 was a little glade with two lovely young trees. One remains a mystery and it isn’t marked on Bob’s plan. The foliage was like a Redwood or a pale Yew, but it had a broad shape with drooping branches. It was a lovely thing. (Added later, it’s a Swamp Cypress Taxodium distichum.) 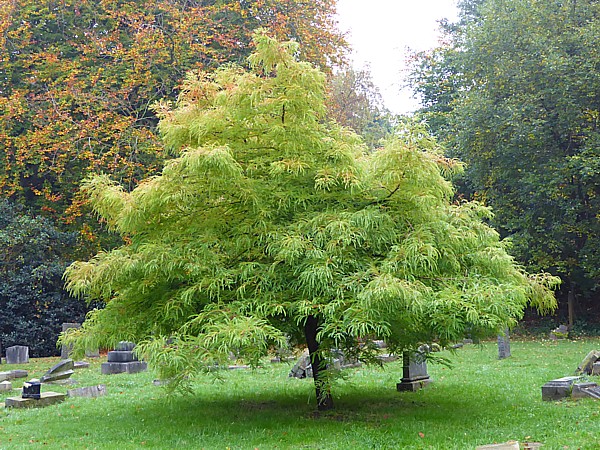 Next to it was our Tree of the Day, the wonderful Tibetan or Birch-bark Cherry Prunus serrula, with shining mahogany-red bark, peeling off in strips. It was planted in 1996 and is already the Cheshire county champion for height. 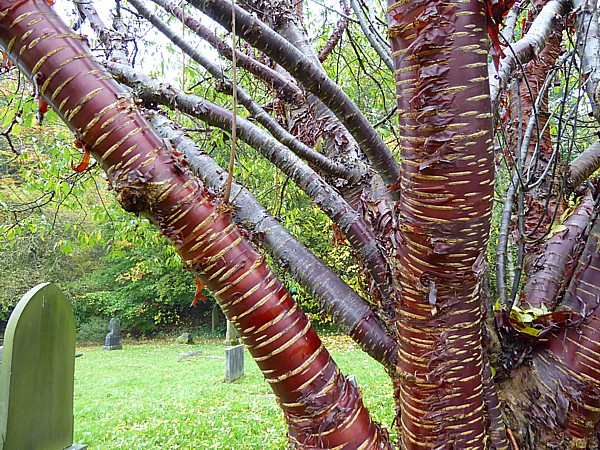 And the Tulip Tree Liriodendron tulipfera in section CE16A, was in very fine autumn colour indeed. 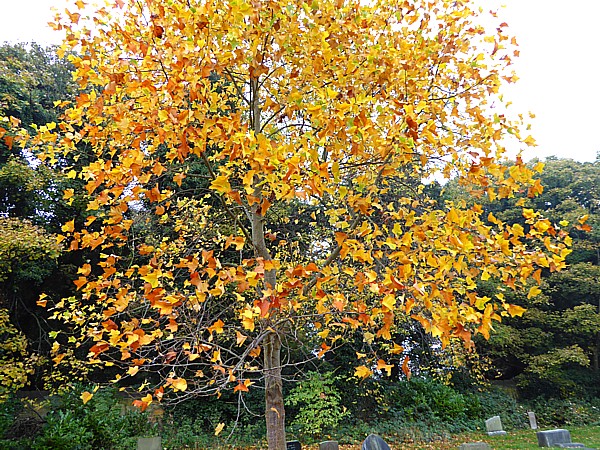 The north west RC section is wilder and darker, with mostly Holm Oak and Holly. There are two big Chilean Pines (Monkey Puzzles) Araucaria araucana. In France, it is known as désespoir des singes or ‘monkeys’ despair’. 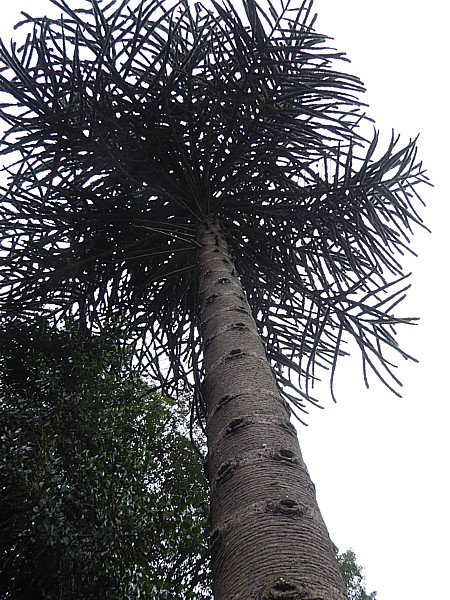 Public transport details: Bus 437 towards West Kirby from Sir Thomas Street at 10.03, arriving Upton Road / Boundary Road at 10.28. Returned on the same bus from the same place at 3.05, arriving Liverpool 3.30.