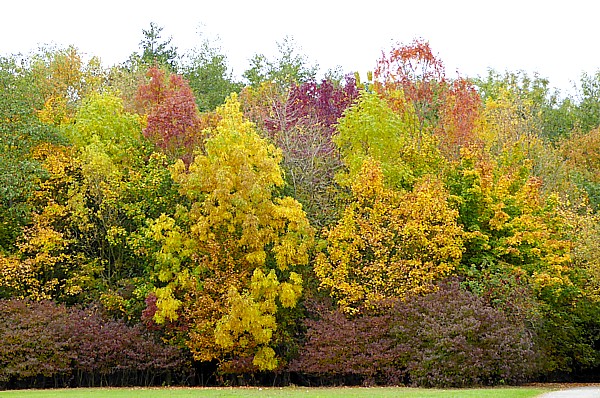 There was a late-blooming wild Rose in the hedgerow near Whiston Station, and five Mute Swans passed high overhead. Ivy was coming into bloom, already attracting Hoverflies, and one fence had a mass of flowering Russian Vine spilling over it. It is said to be invasive, but it also provides flowers quite late in the year. A tall aerial had a flock of about fifty Starlings, some making strange fluting calls, as if they were imitating something. 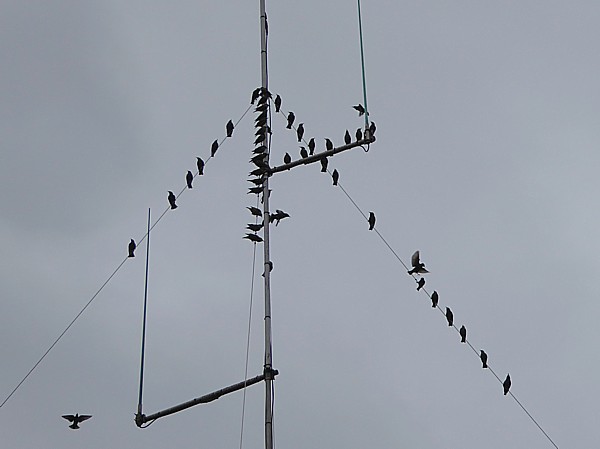 Other late flowers included the inevitable Ragwort, Bindweed, some late Bramble flowers, Himalayan Balsam, White Dead-nettle, an unidentified yellow Crucifer, what might have been Scentless Mayweed and masses and masses of Michaelmas Daisies. At the top of a hill in the park there was a huge spread of nearly-white ones, probably a single clone, showing starkly against a backdrop of Pines. 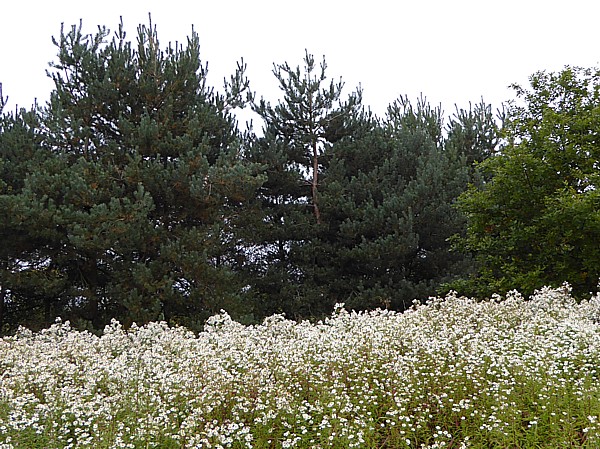 I collected sprigs of three colour variations, the usual lilac one on the left, a paler one in the middle and the almost-white one on the right. 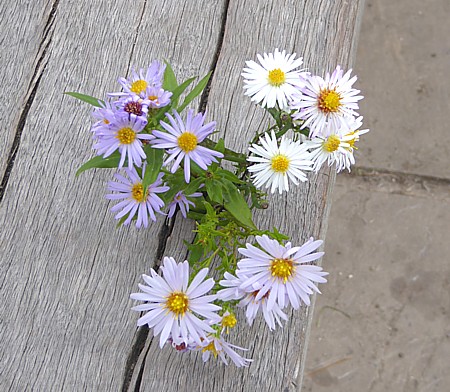 Near the Visitor’s Centre one tree in a group of young Oaks had died and was being consumed by fungus, perhaps some kind of Honey Fungus. 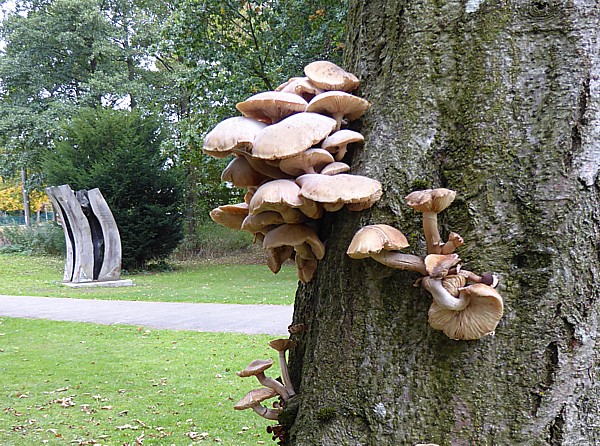 There were no exciting birds, just a Robin singing in the shrubbery, Magpies on the paths, and at Tushingham’s Pond the usual Canada Geese, Mallards, Black-headed Gulls, Moorhens, Coots and a pair of Mute Swans. 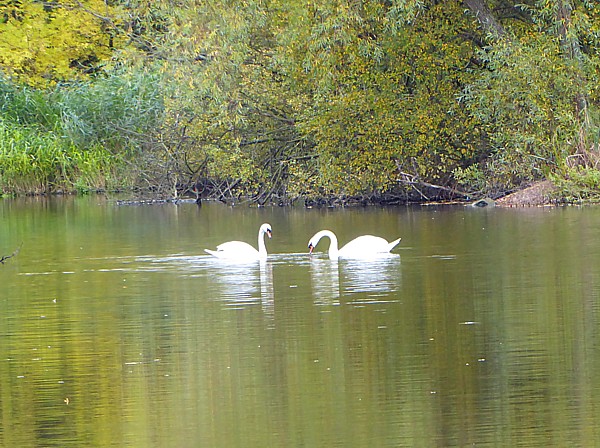 Tree of the Day was a Red Oak near the children’s playground, with its leaves turning yellow. Further on there was another that had turned completely, but they don’t go very red, despite their name, just tobacco-coloured. 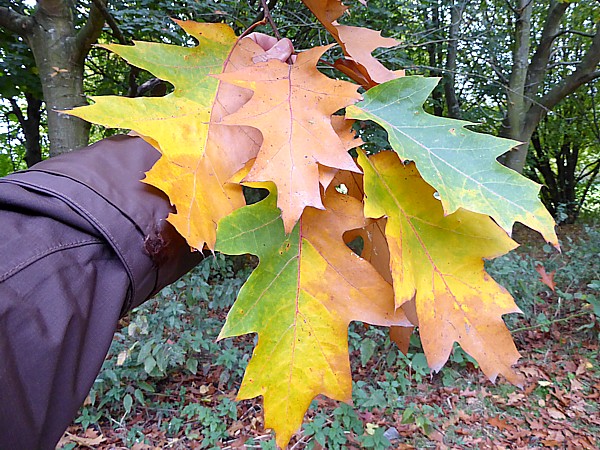 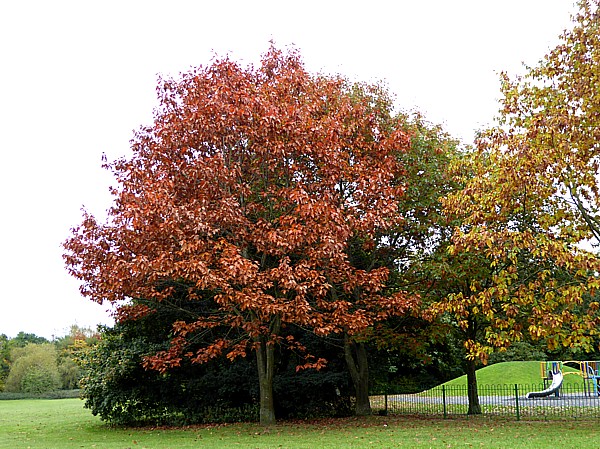 Before I started out I had a look in St John’s Gardens at the Indian Bean trees by the memorial to the French prisoners, and was surprised to realise that the three trees next to them, which I had previously thought were Ash, were in fact more Trees of Heaven. Here’s the Indian Bean Tree with its dark grey hanging pods. 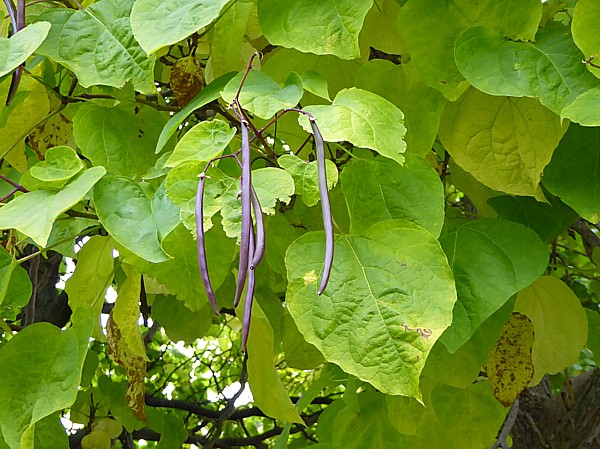 On Monday I saw some more unusual trees. North of Bootle Strand, on the west side of Stanley Road between Marsh Lane and Knowsley Road, there are two lovely trees flanking the entrance to a C-shaped OneVision housing development. They turned out to be Narrow-leaved Ash, with lovely feathery willow-like leaves, now turning a mix of gold and purple. (Added later: this is the variety ‘Raywood”, sometimes known as the Claret Ash.) 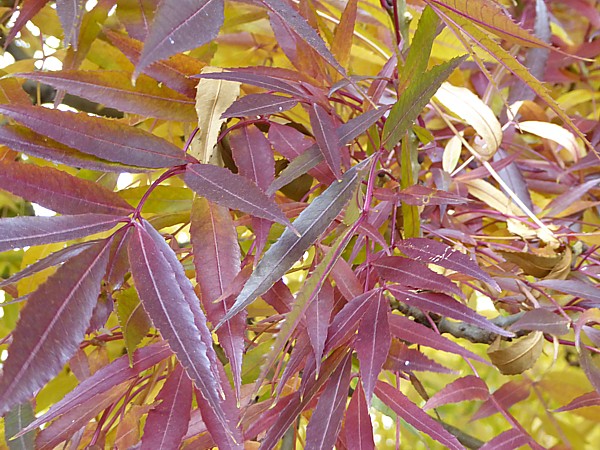 Further north on the same stretch of Stanley Road, at the southernmost corner of North Park, there’s a tree with huge roundish leaves, which are still green. It looks like another Indian Bean tree to me, but there were no seeds to confirm the identification. I will have to keep a look-out next year to see if it is characteristically late to come into leaf. 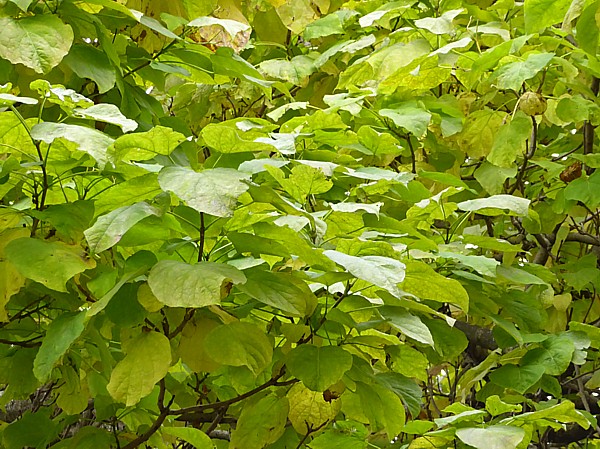 Public transport details: 10.15 Wigan train from Lime Street Station to Whiston, arriving 10.33. Right on Pennywood Drive, right onto the footpath by the school, left onto Dragon Lane, continue down Greenes Road, past the Post Office, then left into Paradise Lane where there is a park entrance. Exited at the Visitors’ Centre and got bus 248 at 1.35 at Pottery Lane / Dales Row, arriving Huyton bus station at 1.45, then the 15 bus at 1.50, arriving Liverpool City centre at 2.35.