It was a hot and sunny day, so a good one to walk another couple of miles of the Trail with its lush and shady greenery. 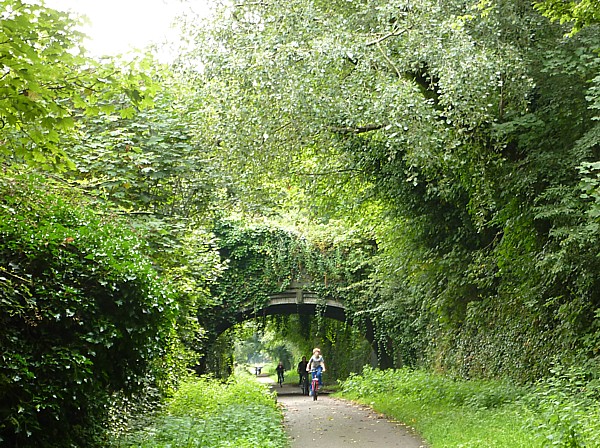 There aren’t many birds about in August, so interest was mainly in the plants and the butterflies. There was plenty of Ragwort and Rose Bay Willowherb, plus Yarrow, Tufted Vetch, Buttercups, Red Clover, Mugwort, Herb Robert, the garden escape Montbretia, Great Willowherb, and a smaller one that might be Marsh Willowherb. There was a big patch of Black Nightshade in one place and the leaves of Coltsfoot in another. Under the trees there were many seedlings of White Poplar coming up. We also noted several kinds of the yellow dandelion-like “Hawkish” plants, one of which might have been the Autumn Hawkbit. A new flower for me was Red Bartsia, growing in large patches. 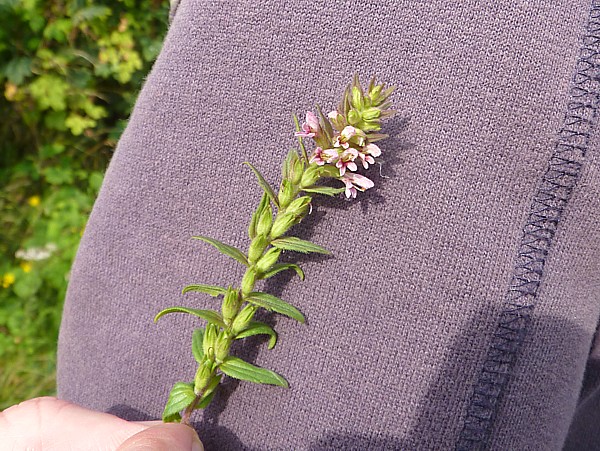 Several Grey Squirrels scampered across the path, dodging the people out on bikes. Signs of advancing summer included Rose hips turning red and the Sycamore leaves showing Tar Spot fungus. According to the First Nature website, the trees only get it when the air is relatively clean, which is good to know.  There were plenty of ripening Blackberries, but they aren’t very sweet yet. 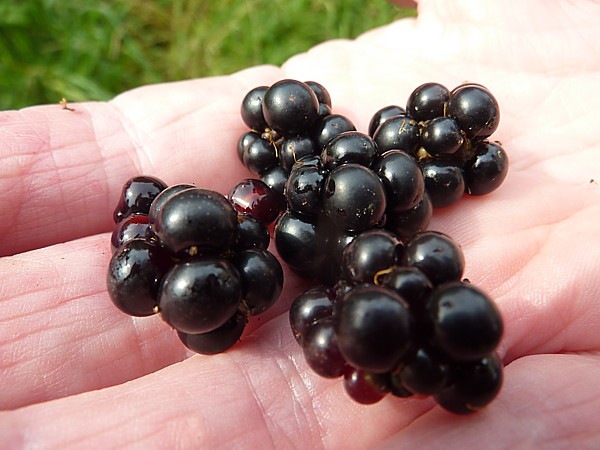 There were several big Buddleias but none had any butterflies on them. My Buddleia at home has been a disappointment this year, too. Ones we did see were a couple of Speckled Woods, a  Gatekeeper flitting around the Ragwort and this Blue one which sat for a while on the bare path, apparently tasting moisture or salt from a damp depression. There were scattered spots on its underwing, so I think it was a Holly Blue, despite them rarely being seen that low down. 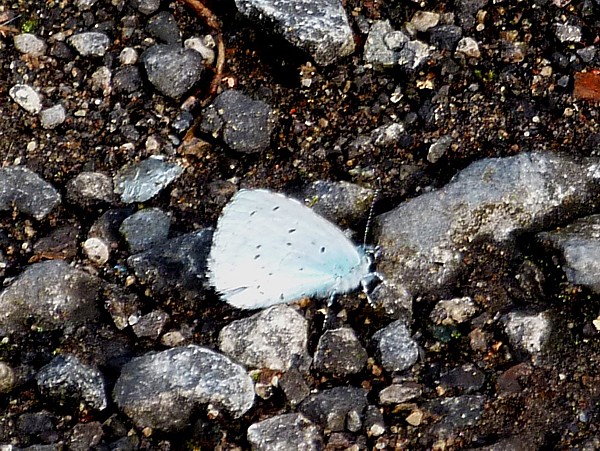 We heard Goldfinches twittering, and saw Collared Dove and Greenfinch. In a stand of Nettles we noticed a Bumble Bee climbing rather clumsily and sluggishly about the tip of the plant. It was a queen Buff-tailed, I think. Was it trying to climb higher and looking for a place to nest? Lay eggs? Hibernate? 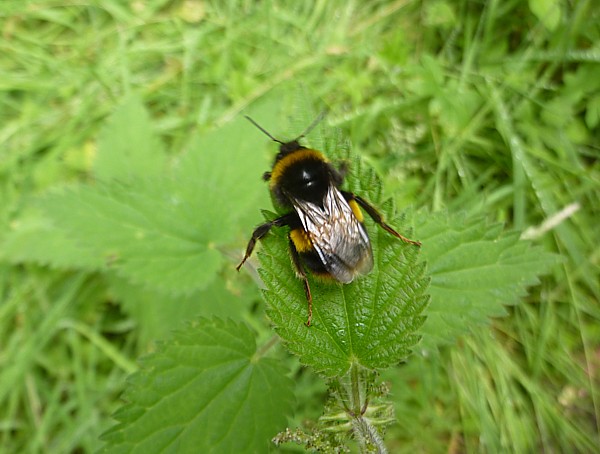 One patch of Ragwort had a few small Cinnabar moth caterpillars, but there are still very few of them about. Another stand of Ragwort had loads of smallish wasps or bees, probably after the nectar. There were areas of the verge where something had been cleared, perhaps Japanese Knotweed, but at the back of some houses just one surviving plant was growing like a small tree. 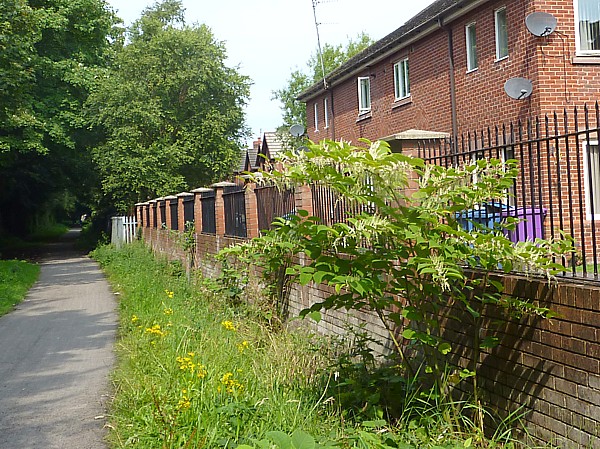 Near the former West Derby Station the walls of the cutting had Royal Fern growing. 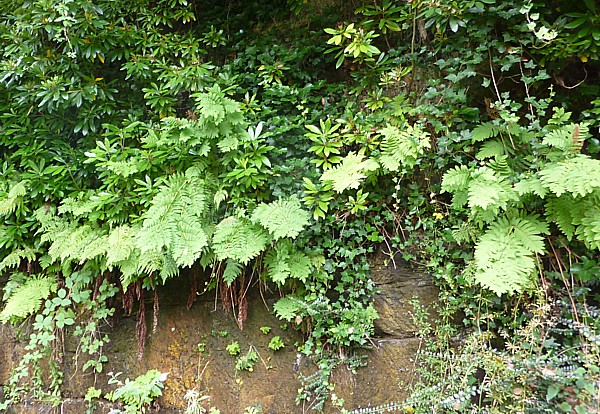 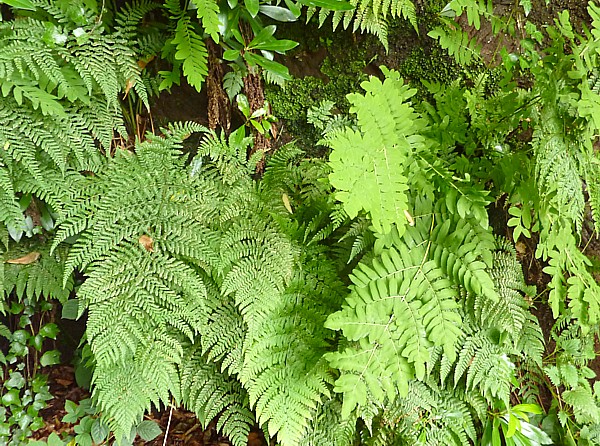 We lunched at the old station area, accompanied by a Robin, which was hopping about in the Ivy on the wall, clearly interested in us eating our sandwiches but not quite brave enough to come down, even when we scattered some mealworms.

Further southwards is a deep cutting, very damp and shady. There is Liverwort growing up the walls and the almost-permanent puddles on either side had a wet-loving member of the Speedwell family called Brooklime, with the improbable Latin name of Veronica beccabunga. In the section from Alder Road to East Prescot Road we added Enchanter’s Nightshade to today’s flower list.

Near Alder Road we took time out to visit Margaret’s garden. Her yellow Mexican Orange had a big spider on it, probably a Garden Cross Spider, but it wouldn’t show me its dorsal side to see the cross marking. On Golden Rod there were over 100 blue-green iridescent flies. Flies (Diptera) are very numerous and hard to identify, but they looked to me like one of the family Calliphoridae, perhaps Greenbottle flies. If so, they may have been a single brood which had emerged from some dead creature in a garden nearby. 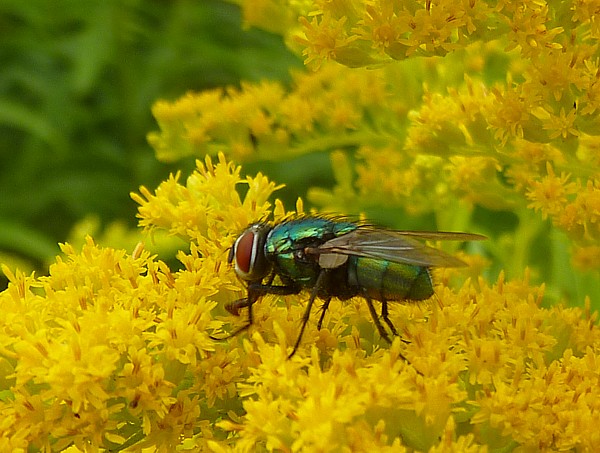 As we made our way along the last bit of the Trail to East Prescot Road the sky was darkening, looking like the promised rain was imminent. Just as we got on the bus the heavens opened, but it had stopped by the time we reached the City Centre. How very convenient!

On this eighth section of the Trans-Pennine Trail we walked a further 2 miles of it, taking us to 20½ miles from Southport.