It was a warm and humid day, overcast, with the promise of sunshine later. From Waterloo station we walked up Brighton Road, through the level crossing on St John’s Road and turned left into Somerville Road. Opposite Victoria Park, between Somerville Road and the railway, is some derelict land that a local group took over a few years ago. Some dedicated volunteers are gradually clearing it. It’s called Waterloo Community Forest Garden, and they are planting fruit trees, making woodland glades, and hoping for community allotments. There is known to be a fox living there. 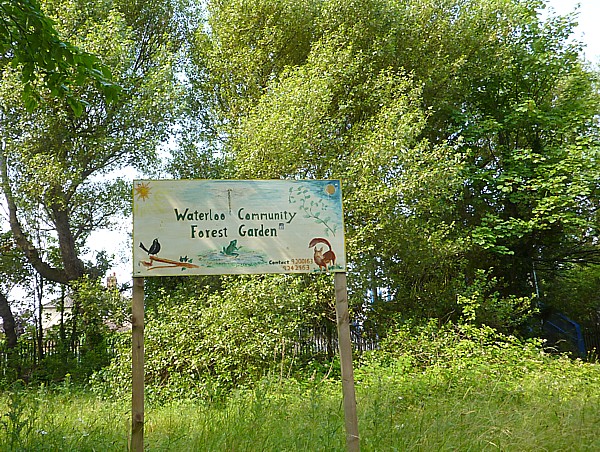 Then we crossed into Victoria Park itself. Since the cutbacks in Council funding some years ago, less work is being done in all parks, with some happy results. One consequence is that the Privets aren’t trimmed so often, so they were all blooming, filling the park with their lovely scent. 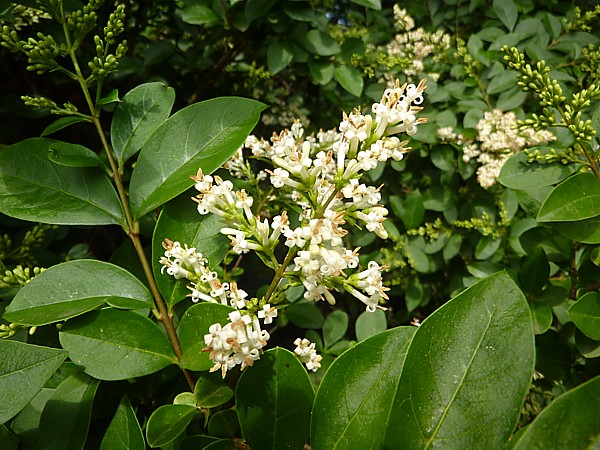 The usual park birds were there – Wood Pigeons, Magpies, a Robin singing out of sight and a group of Long-tailed Tits in the trees above. A Blackbird was basking in the sun next to some shrubbery, with its beak open. This is a rubbish photo, I know, but I didn’t want to get any closer and disturb its siesta. 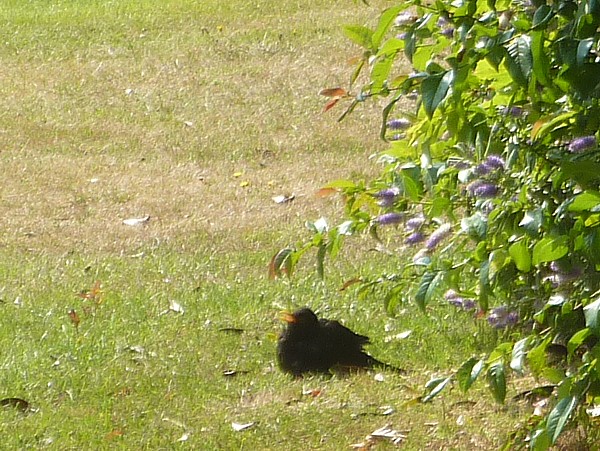 Less usual birds included a Mistle Thrush, lots of House Sparrows (there is a large colony here) and a very confiding fat pigeon in a branch right above us, which then flew onto grass, and we  realised it was a very young Wood Pigeon, probably just out of the nest. Some people wonder why they never see baby pigeons, but they are fully-grown by the time they emerge, and look just like the adults, apart from the detail of the plumage. 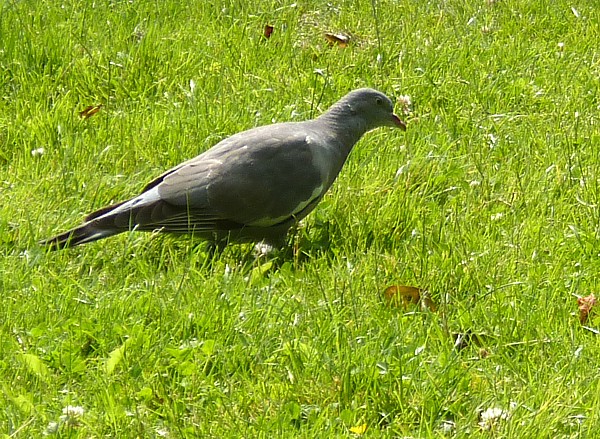 One large field was ploughed up and seeded as a wildflower meadow about four years ago. It looks very rough and unkempt from a distance, but it bears closer inspection. We found an orchid in there with unspotted leaves, and a tall, thin, dark purple flower, just going over. I wonder if it came in with the wildflower mix, whether it was always under the grass, just waiting for the mowing to stop, or whether it had come from a wind-blown seed? The rest of the meadow contained various grasses, plus Ragwort, Musk Mallow, Red and White Clover, Knapweed, Buttercups, Lady’s Bedstraw, Cornflower, Bird’s Foot Trefoil, Wild Carrot, and one delicate white frothy one we had to look up – probably Common Marsh Bedstraw. 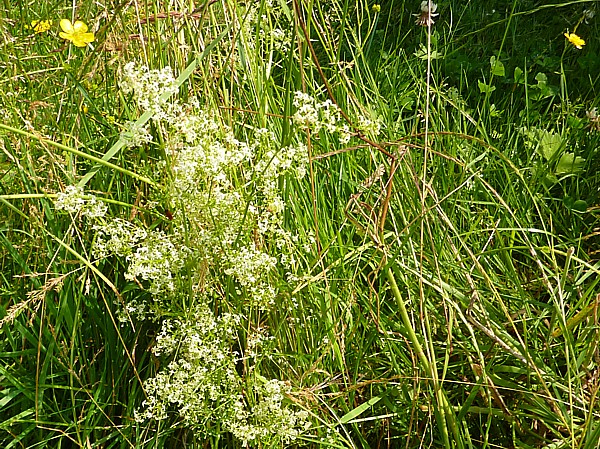 In another field they have halved the mowing job by only cutting in a spiral, so now it looks like a maze, or a spiral walkway. 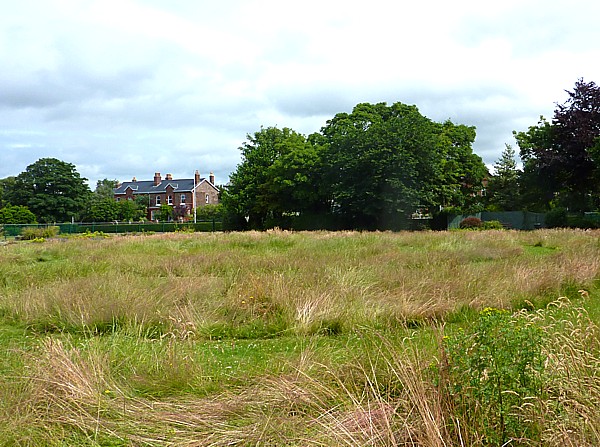 On a wooded bank there were more wildflowers, those typical of shady edges. Corncockle, Ox-Eye Daisy, Feverfew, Foxglove, Red Campion and lots of tall Garlic Mustard with seed pods. A couple of Grey Squirrels scampered about. Scattered all around are wood carvings on old tree stumps, with lovely detailed workmanship. 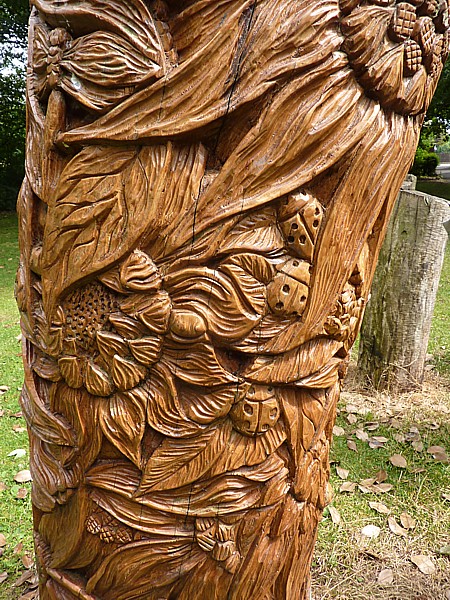 There used to be a “notable” tree here, because there was a marked map at one of the entrances and an explanatory sign next to the tree itself. I looked at them two or three years ago. However, the map and the marker have both now disappeared. The tree was notable because it was planted to commemorate a Royal event for one of the 20th century Georges. I think it was for the accession or coronation of George V in 1910 or 1911. We pottered around the trees in the right area and wondered if it was the Oak, revealed to be a Pedunculate or English Oak Quercus robur, by its stalked young acorns. It’s less common in the north west of England than the Sessile Oak Quercus petraea. That might have been the special tree, but there was also huge old Black Poplar Populus nigra, a species which is rarer now that Hybrid Poplars are planted so widely. The bark was wonderfully fissured and ridged and the tree itself towered over the adjacent Sycamore (half in front of it on the left) and the English Oak (behind and right). I wonder if that was the one? 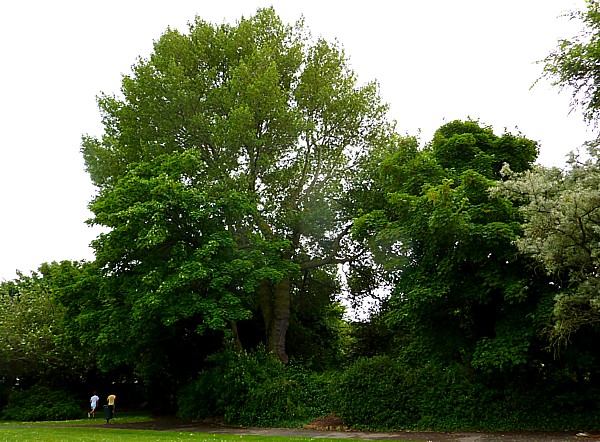 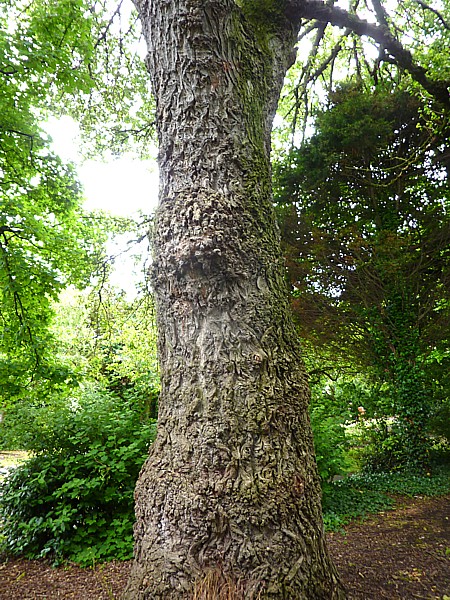