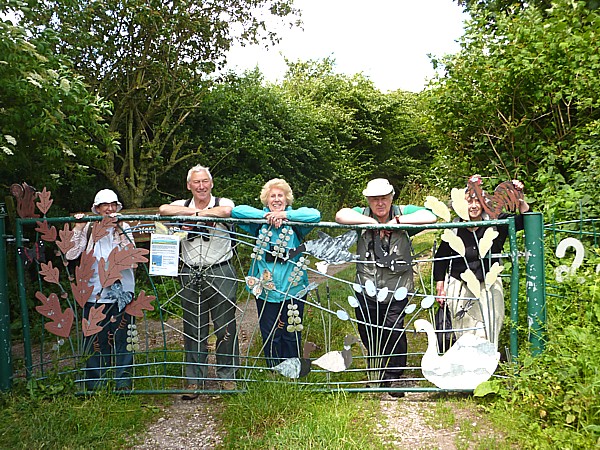 Another warm and sunny day, with thin cloud and high humidity, although rain was forecast for later in the day. From Aughton Park Station we turned right onto Long Lane, crossed Prescot Road, then crossed Liverpool Road at Christ Church Aughton, and took the footpath up to the Reservoir. There was a Dunnock on the ramp at the station exit and a young Swallow on the wire by the church. The hay has been harvested, and there were huge wheels of it on the skyline.

On the verges of the wheat fields we spotted a Small Tortoiseshell, some Meadow Browns and a  Red-tailed Bumble bee. A large dragonfly flew past – probably an Emperor. A Skylark was singing overhead and a Kestrel was hovering. Along the footpath to Holly Lane the Elder and Honeysuckle were blooming in the hedgerow. 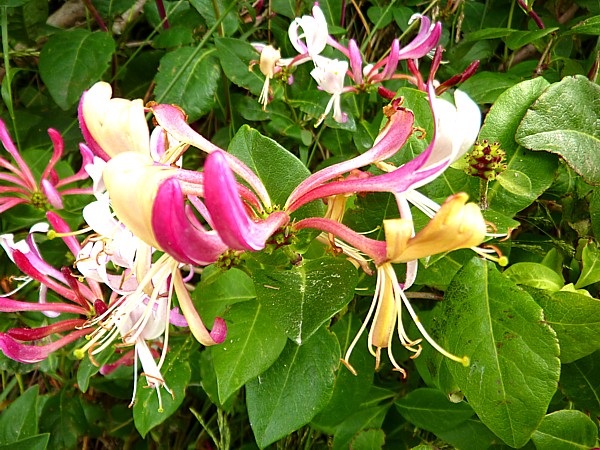 This summer, Gorse Hill is having open days on the first Sunday of each month. See their website and also their blog “Out and About at Gorse Hill” . They are particularly proud of having all three species of Newt on the site, and have built new ponds and connecting damp hedge lines to allow them to disperse. Along the sides of some paths they have laid flagstones with spaces below them to act as Newt shelters, and which are also used by beetles and spiders. 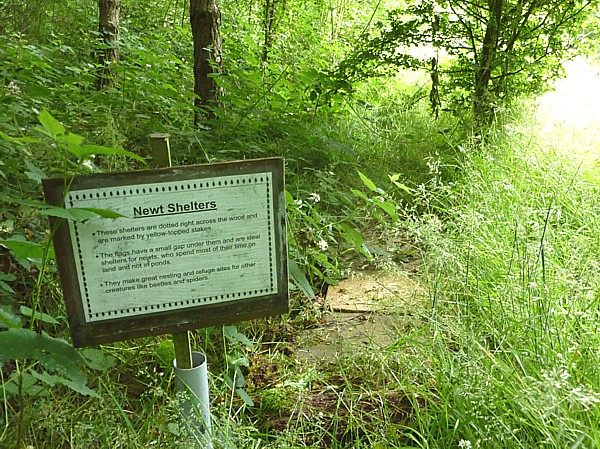 Other man-made homes for wildlife included small mammal piles, made from plastic tubes filled with hay, covered in carpet squares pegged in place, then covered with branches, They say they are popular nesting and refuge sites for mice, voles and shrews. 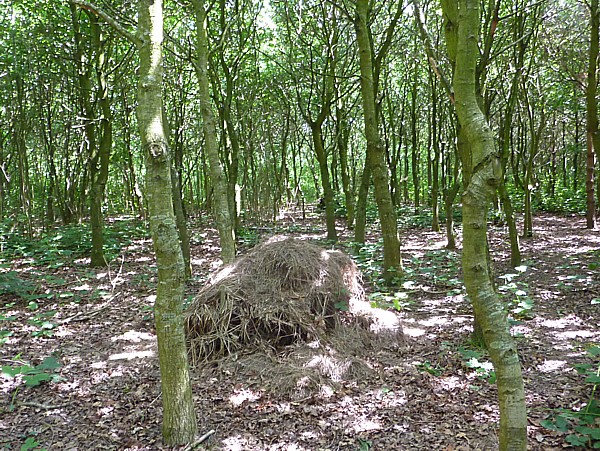 We were also impressed by the Bug Hotel with en-suite teapot! 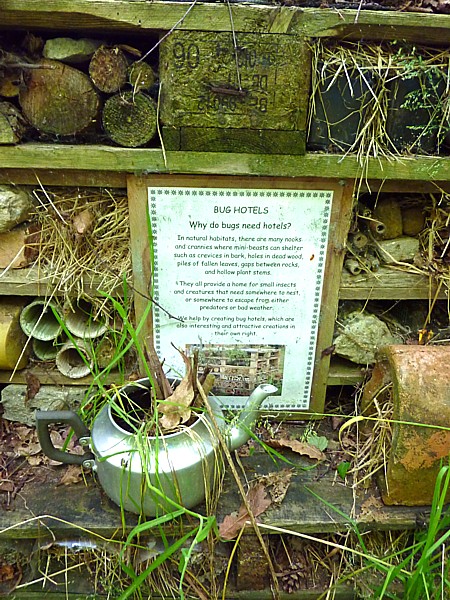 We lunched at the picnic tables alongside Seldom Pond. There were hundreds of Common Blue Damselflies, many paired and ovipositing in the water, others basking on the Bramble. 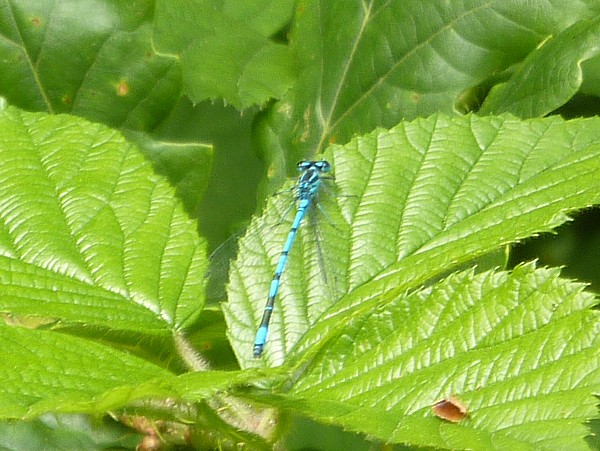 Tree Sparrows were visiting the bird feeders, and there were Blackbirds along the woodland edges. Several magnificent Teasel plants were towering over the plants at the water’s edge. 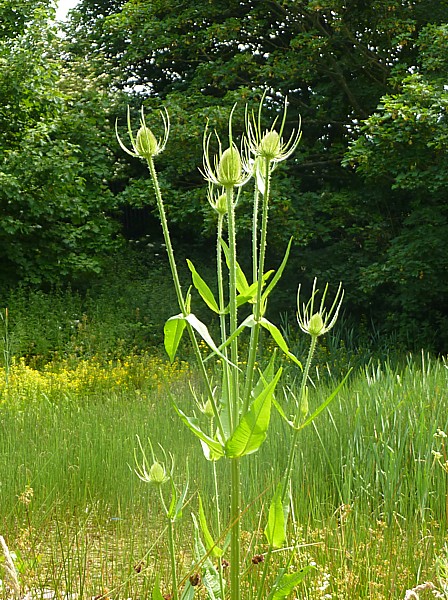 Along the other side of the wood many trees bore signs identifying the species, whether it was native or not, and what the wood is used for. Speckled Woods were dancing in sunny spots, we spotted one Red Admiral and we heard the song of a Willow Warbler. The reserve encourages children from visiting school parties to write poems about the woods, and some are on display. This one is beautifully illustrated by its author. 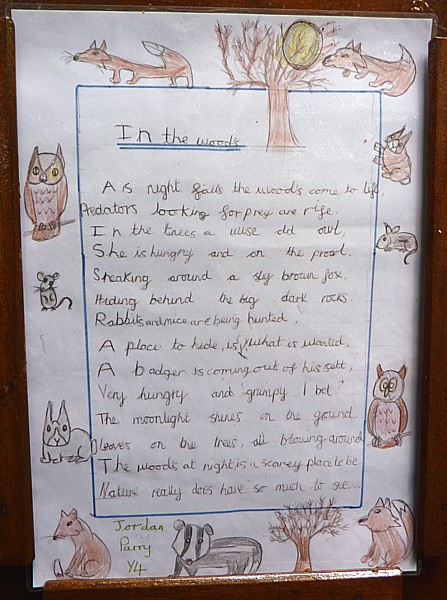 We climbed up Gaw Hill and saw one of the reserve’s specialties, a bright male Yellowhammer, singing from a favourite tall branch. There is a great view northwards to Southport and further on to Blackpool Tower. Then we headed back to the Visitor’s Centre, admiring the large stands of Foxgloves in the shady spots. 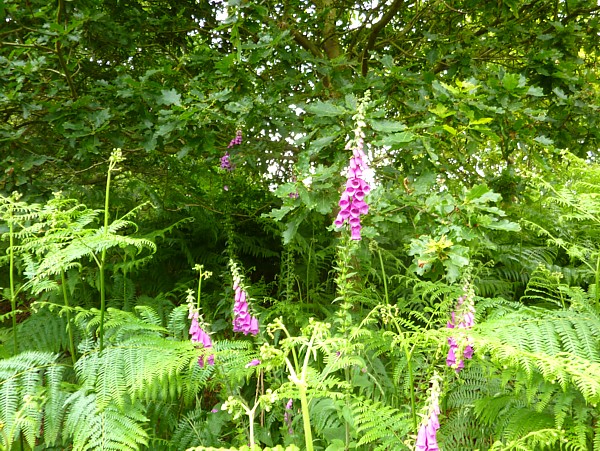 They sell tea and home-made cake (recommended) and there is a stall where they sell some of their own garden produce such as rhubarb, beetroot, strawberries, gooseberries and red currants. They also have an orchard growing heritage varieties of apples, which will be on sale in the autumn. Just as we sat down for tea the heavens opened. It rained heavily as we walked back to the station, so we were soaked for the first time in ages. Still, the gardens need it!