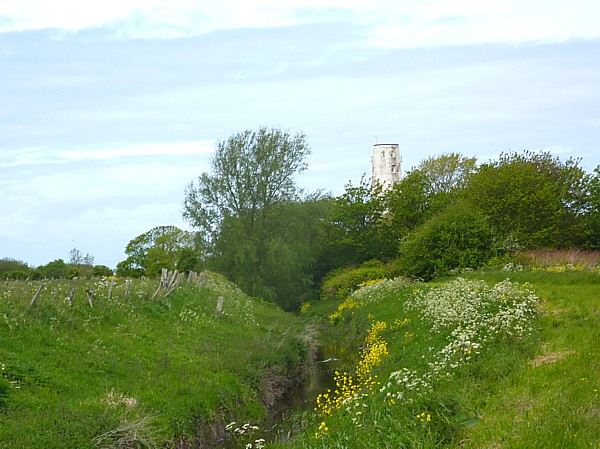 It was a blow-your-hat-off sort of day, and some of the group put on scarves and gloves, even though it was mid-May. From Moreton Station we walked north along Pasture Road and turned into the North Wirral Coastal Park and along the Birket. The banks were lined with white Cow Parsley and yellow  Rape, while the path edges had Garlic Mustard, Green Alkanet, Buttercups, Ribwort Plantain, Alexanders, loads of Goose Grass and the pink flowers of Honesty. 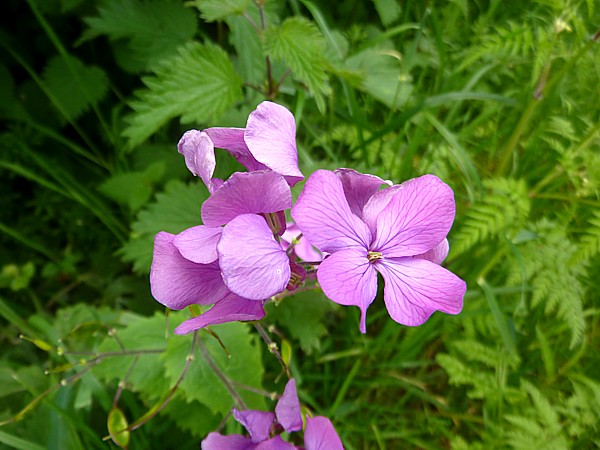 There were lots of Robins and Starlings about and a Whitethroat was skulking in the verge. There was a Mallard on the Birket, a Skylark and Swallows overhead, a Blue Tit flitting about, and we heard a Sedge Warbler. We could also hear something making short churring noises in the grass, not too far off. Despite the jokes about a Corncrake, nothing flew up when John walked that way. Was it a frog or toad? I have since checked the sounds of Common Frog, Common Toad and Natterjack, but it wasn’t any of them. It must have been an insect.

High in a tree a Crow was on its nest, standing still for a long time, with something white and fluffy at its feet. Did it have a newly-hatched chick and was it guarding it? 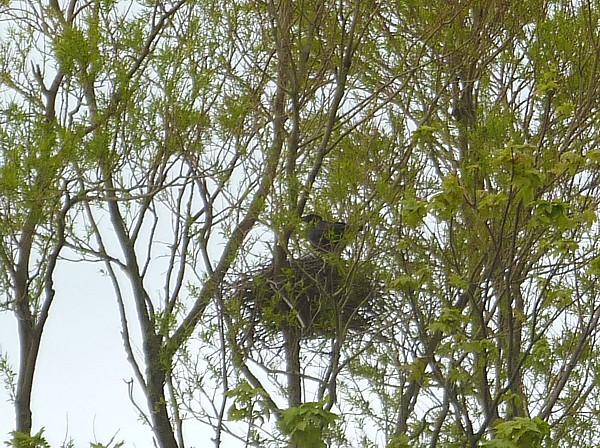 The Wych elms near the Lighthouse had bunches of young immature fruits, while the Sycamores had their flowers out, in the type of pendulous groups called panicles. 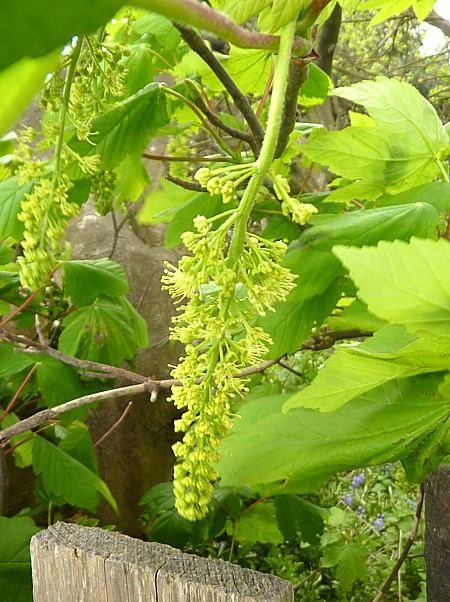 In the lanes west of the Lighthouse we were looking for a Turtle Dove, which had been seen here in the last few days. There were a few birders scouting about for it, including the fellow who first saw it, but there was no sign today. A local also told us there had been a Little Owl nearby but a fox got it. We had to be content with a Blackbird, two Greenfinches on the wires, Canada Geese in a field, a Mistle Thrush and three Wood Pigeons on the ground, and a Collared Dove. One area of verge appeared to have been recently cleared of Japanese Knotweed, but new shoots were poking through. 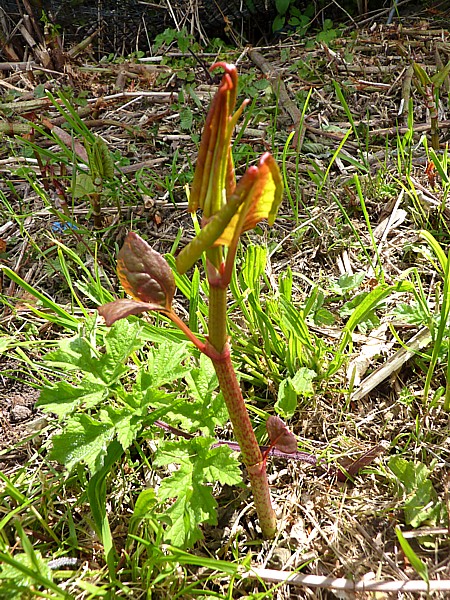 At Lingham Farm we looked at their raised pond / fountain, which was full of huge goldfish. Some of them were well over a foot long, and there were perhaps 30 or even 50 of them. They have a thriving colony of House Sparrow here too. 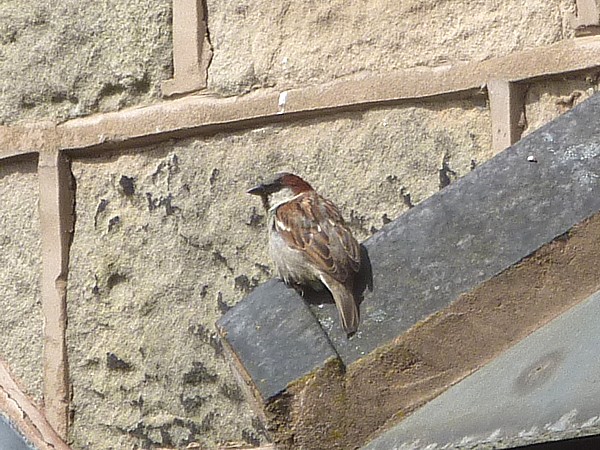 We lunched by the Nature Pond, which had Coots with chicks and some Mallards. A small bird flitted quickly across a gap in the reeds, which was probably a Sedge Warbler, although we never could quite see it. A Kestrel was hanging on the wind above and a Pheasant called. By the sides of the path along the horse fields, there were hundreds of Dandelion clocks, some perfect, even in the stiff breeze, while others blew away as we brushed against them. How do the yellow petals change into the white parachutes? Is it metamorphosis like the way a caterpillar turns into a butterfly? Some of the closed ones had yellow petal tips, while others had the white fluff showing.  This YouTube time-lapse of a dandelion clock forming shows that the petals don’t turn into the parachutes at all, the parachutes grow up from below while the flower is closed. 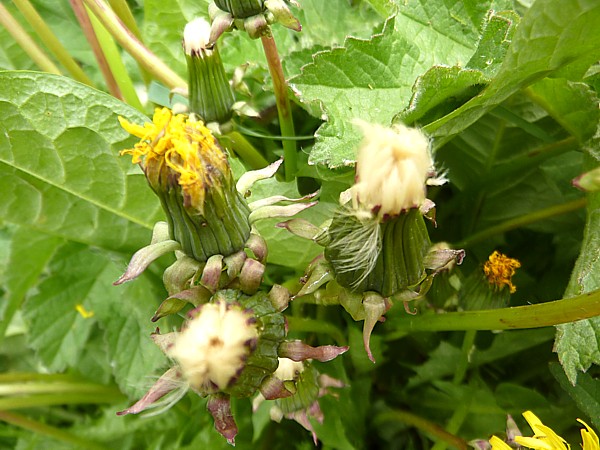 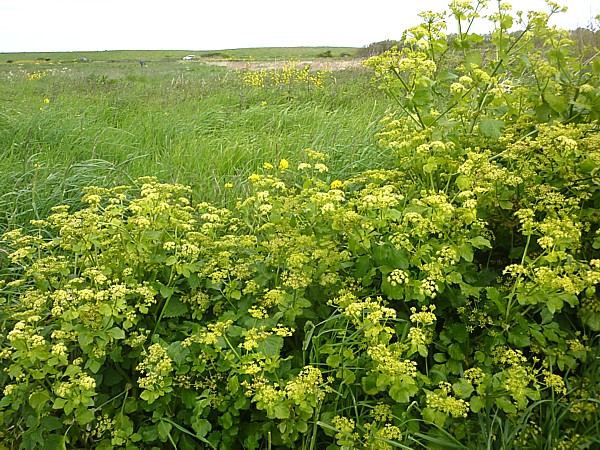 The tide was in and we could see the three Hilbre Islands. A Shelduck flew past, low over the water. There were Linnets on the grass and Cormorants standing on posts. On a small sandbank a Greater Black-backed Gull and a Lesser were waiting for the tide to turn. We turned back towards the Lighthouse, noting a Heron over the Nature Pond, a Carder bee on some Green Alkanet and the lovely lilac anthers on freshly-blooming Hawthorn. 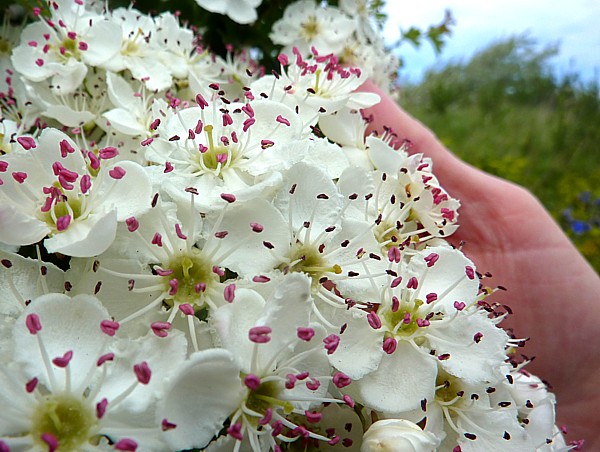 Public transport details: The West Kirby train at 10.05 from Central Station, arriving Moreton at 10.25. Returned from Moreton station on the 2.12 train, arriving Liverpool Central at 2.35