Two out of the last three times we have been to Taylor Park were on very wet days, but happily the rain kept off today. 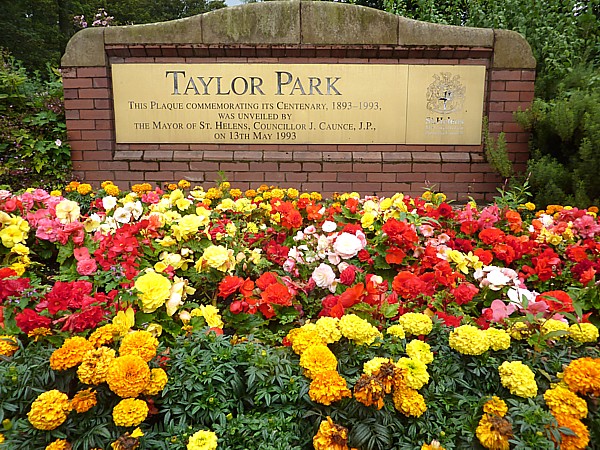 There were lines of molehills on the wet lawn, and under a Common Lime tree were several erupting clusters of fungi. Was it Honey Fungus? 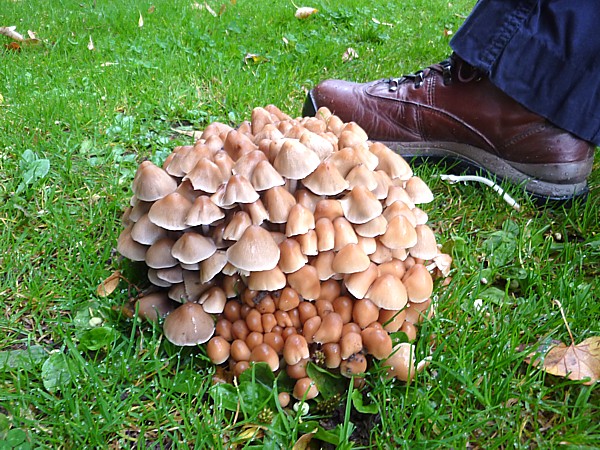 Nearby was a nice Hornbeam tree with ripening seeds. 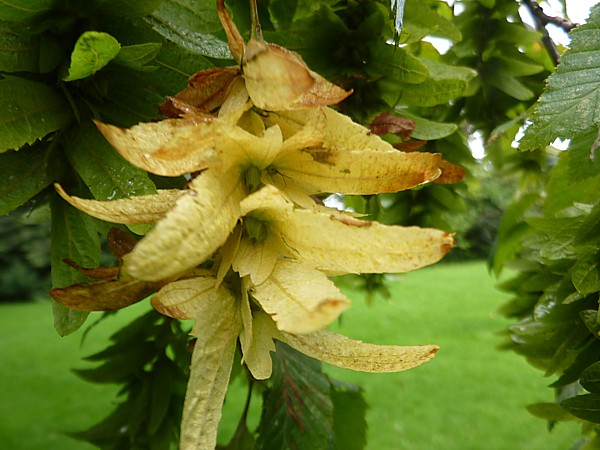 Magpies were chattering in the trees as we made our way to the lake, and there was a Pied Wagtail on the bank. On the lake itself were Mallards, Coots, Canada Geese, a limping Greylag and a few Lesser Black-backed gulls. Some Moorhens were skulking near the edges. There were lots of Black-headed Gulls, which have now nearly all moulted out their black heads, with just a few still having a faint shadowy cap. The Swallows flying over the lake were all young ones without tail streamers, so perhaps their parents have already left for Africa. A few House Martins flew amongst them. 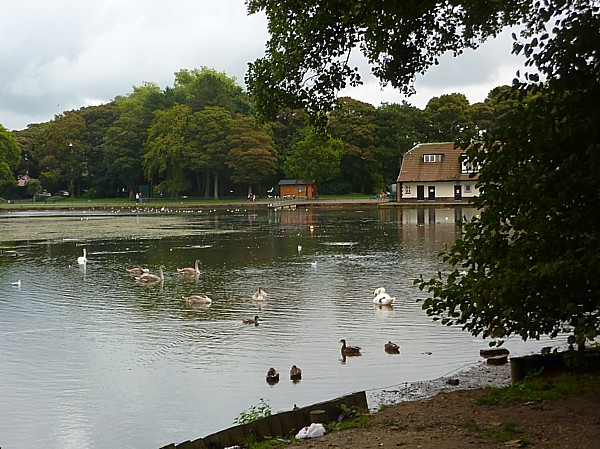 There was lots of weed in the lake, and there was a sign on the fence saying the Rangers believe it is starving the water of oxygen. They plan to dredge it out and leave it on the jetty by the boathouse so that all the invertebrates can get back into the water. After a few days they will send it off for recycling. Another sign advised that feeding bread to ducks is bad for them, and the message was reinforced by a child’s drawing of happy, healthy ducks and ducklings. 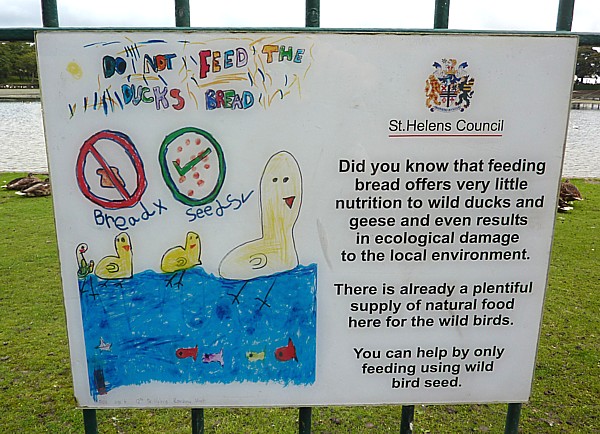 We stopped to examine a young tree in a cage by the boathouse bank. Its bark was mottled like Holly (which is “smooth pinkish-grey, freckled and striated” according to Mitchell). The dark glossy leaves weren’t spiny, though. Was it a Holm Oak? We spotted some rudimentary seeds which might have been undeveloped acorns, but the bark of a Holm Oak is supposed to be “brownish- black or black, shallowly cracked into small, square, thin, dry and often curling plates.” It didn’t look like that. We’d have liked to ask a Ranger but the Ranger’s office was closed. 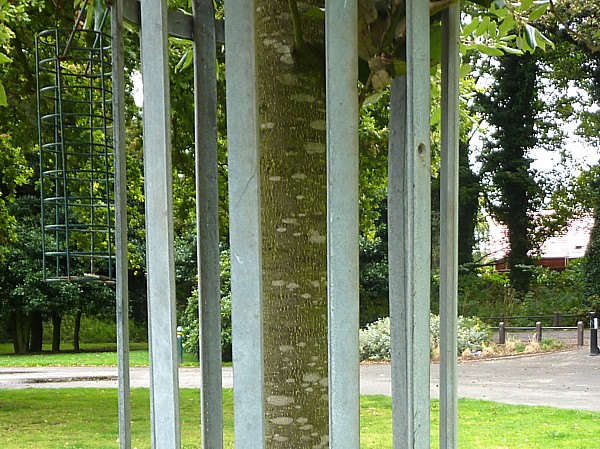 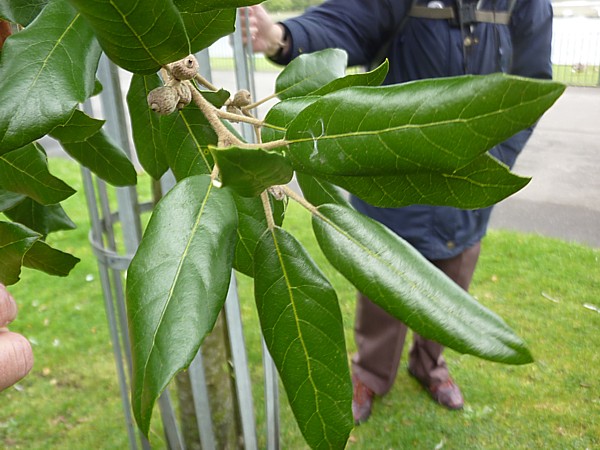 There was Purple Loosestrife growing on the water’s edge and ripe Elderberries in the hedges. On the far side was a Great Crested Grebe carrying quite a big fish. He or she went to a single humbug-headed juvenile, who grabbed it and swallowed it down in a single gulp. A Heron was hunting under trees and there was a pair of adult Mute Swans with five cygnets, but we saw no leg rings on them.  Two small fluffy ducks perched on a rock in the north corner of the lake, and we thought at first that they were Mallard ducklings, but they were probably Tufted duck, either juveniles, or adults in eclipse. 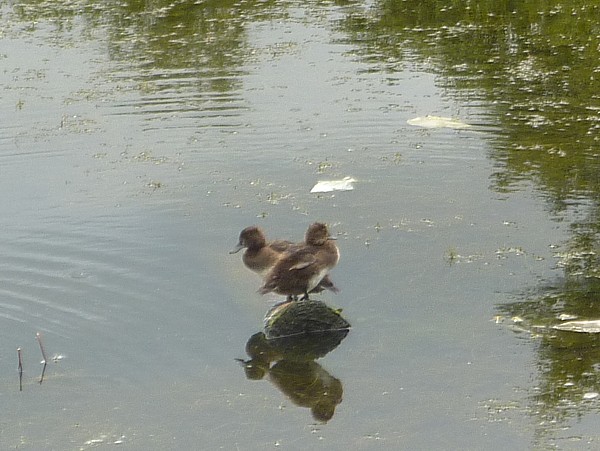 Near the Ranger station were two young trees with unusual scaly bark. Leaves were alternate, with a rough surface, and looked like Elms – uneven at the base of midrib, called “shouldered”. We though they might be Wych Elms, but Wych Elm bark is said to be smooth and silvery-grey in young trees, becoming finely cracked in black as they mature. The best match I can find is the hybrid Dutch Elm, whose bark is “distinctively cracked into shallow small flakes” and whose leaves are said to be “variable in size on the same tree and often buckled or puckered”. 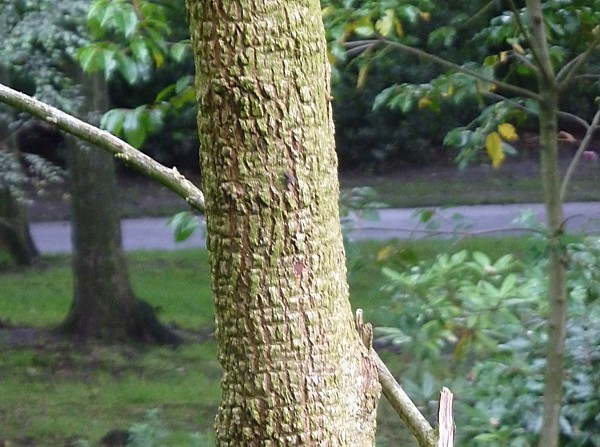 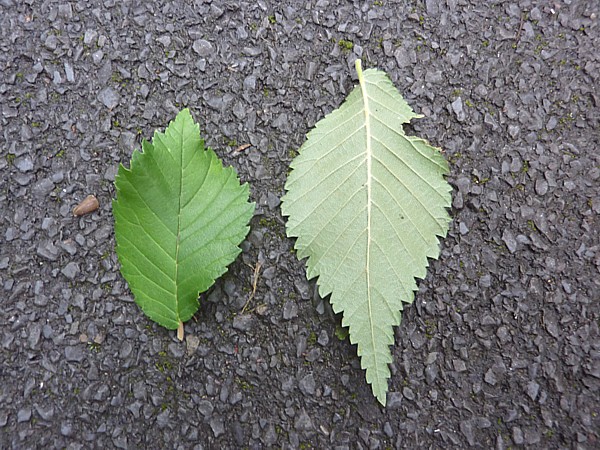 The Quarry Garden was damp, shady and ferny. The only birds were Robin, Wood Pigeon, Blackbird and  Blue Tit.  Amongst the shrubs like Heuchera and Mahonia was a young Chilean Pine (Monkey Puzzle) looking a bit sick and twisted, so perhaps it is in too wet and shadowy a spot for it to grow well, but I suppose the idea was for it to look “prehistoric”. On the collection of petrified wood were scatterings of small orange globules, perhaps a fungus or a lichen. 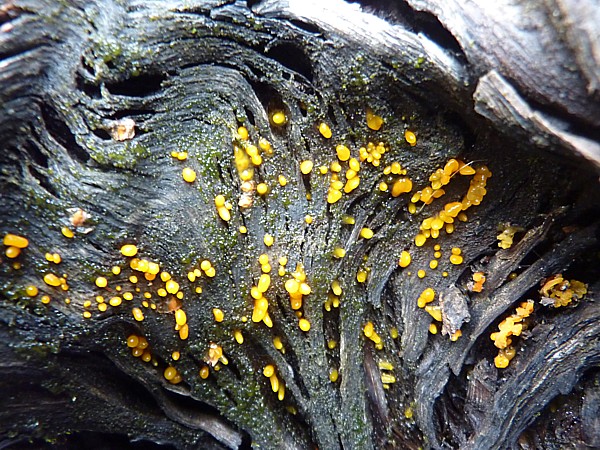 The cultivated form of Red Dead-nettle was attracting several small hovering insects and at least one Carder Bee, which foraged right into the flowers. 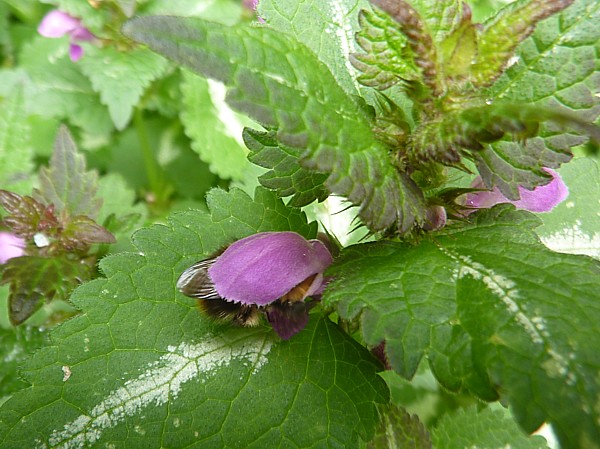 We climbed up to the viewpoint over to Billinge Hill, with Winter Hill further away to north east. Small parties of Canada Geese were flying eastwards and honking. All the trees in view were still green, there are no autumn colours starting yet, although the berries are mostly all ripe. We wandered back thorough the damper, wilder woody paths, looking for flowers, There is still quite a lot of Ragwort in flower, and Ivy-leaved Toadflax on the old walls. Elsewhere were Buttercups and Daisies in the lawns, some late Bramble flowers, Self-heal, Great Willow Herb straggling in the shrubbery and Bittersweet.