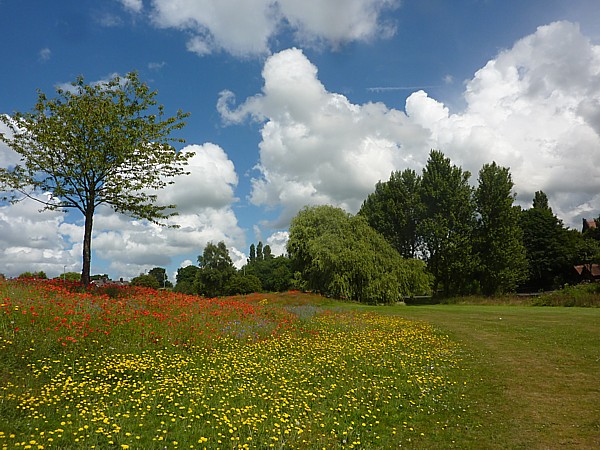 Another fine and sunny day, and off to Kirkby, where we hear Knowsley Council have planted masses of wildflowers. Our first call was into the little Lime Tree Woods off Valley Road, where we noticed a Speckled Wood butterfly with half of one wing missing, probably pecked at by a bird. 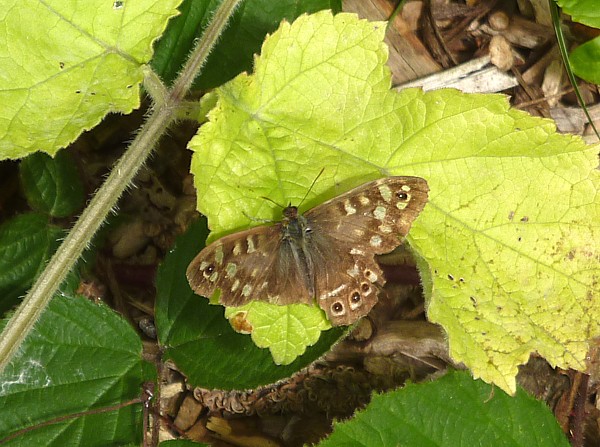 Once we had passed under the M57 motorway we saw the huge expanses of wildflowers on the eastern verge of Valley Road, stretching about a kilometre (over half a mile) along to Valley Park and St Chad’s. Different sections were planted with different mixes. Some had Corncockle, Poppy, Wild Oats and Ragged Robin. Another stretch had a lot of Yarrow, while a third had lots of Wild Carrot, Thistles and a tall plant that I think was Fat Hen [added later – no, it was Mugwort] .Sadly, most if it was past its best. We will make a note to come earlier next year when they are in their full glory. 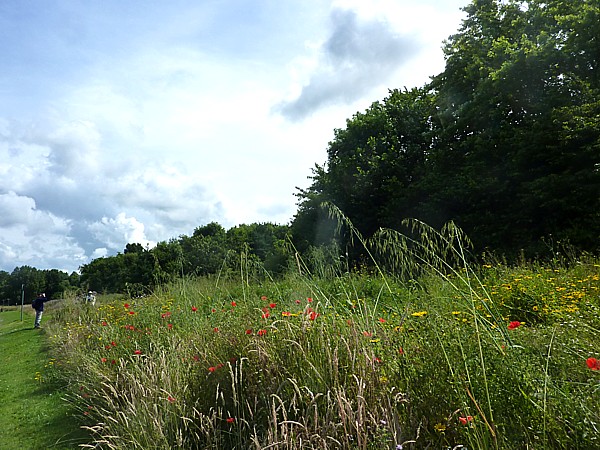 Amongst them we saw a Gatekeeper, a Meadow Brown, a tall Orchid past its best and a Rabbit, running off over the hill. Birds included Swift, Magpie, Blackbird and Wood Pigeon. As we approached Valley Park we were delighted to see some mounds with the Poppies, Cornflower and Corn Marigolds still out. 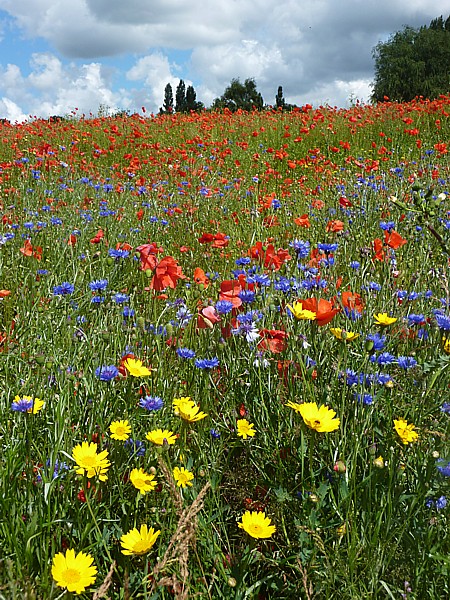 We had lunch in St Chad’s Gardens, where we met Chris F, who joined us for the afternoon. There was a Mistle Thrush on the lawn and Cut-leaved Cranesbill on the edge of a flower bed. We heard what sounded like the screaming of a bird of prey, or the calling of a juvenile for its parents, but we couldn’t see anything. One tall building did, however, appear to have a Wood Pigeon nesting on a ledge, an uncommon sight. St Chad’s churchyard has an unusual Great War Memorial Cross with some lovely words. “To the honour of the men of this parish who went forth in these years of war to fight for God and King, for justice and freedom, and in thankful remembrance of those who returned not again.” 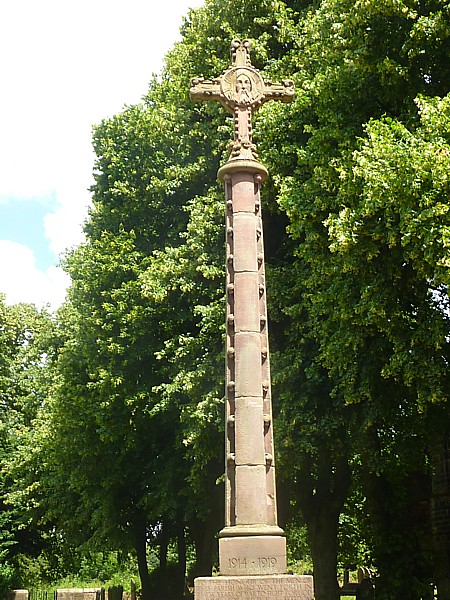 The churchyard had a long line of molehills, and many paths were edged with the Liverwort Marchantia polymorpha, which was throwing up its fruiting bodies. 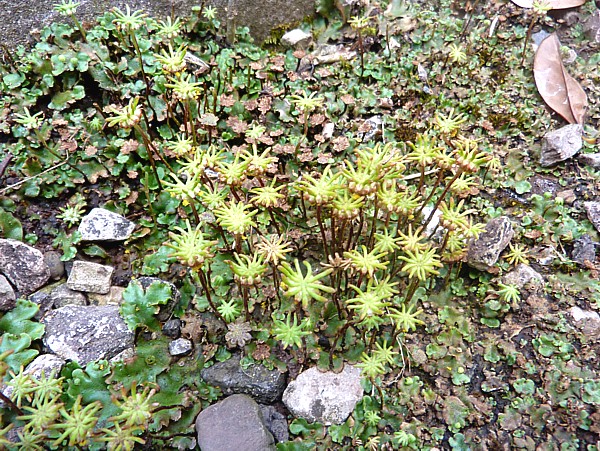 The hopper at the top of a drainpipe was surrounded by copious bird droppings. Was it an old Kestrel nest? CF rummaged in the grass and found several Kestrel pellets. 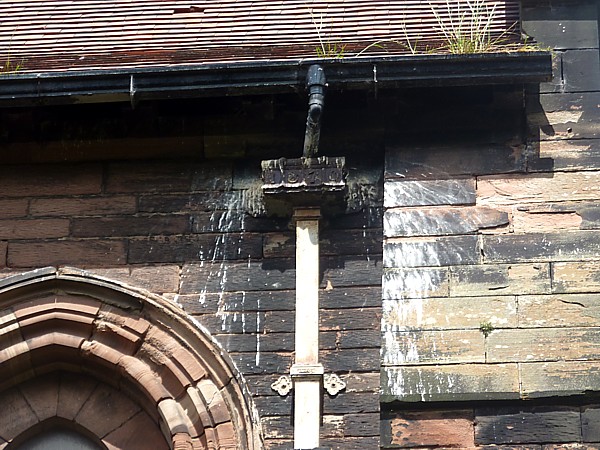 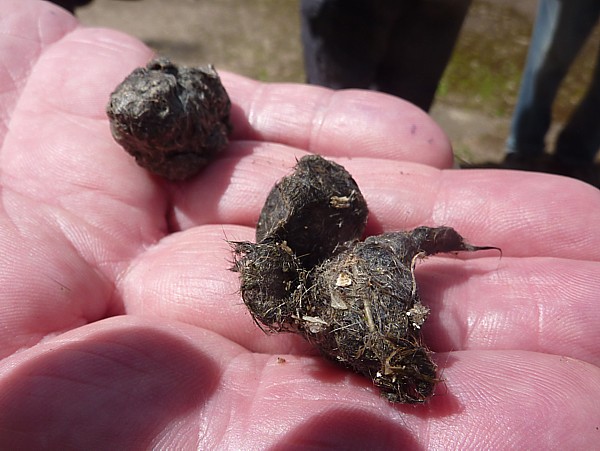 I took five of them home and took them apart. Mostly made up of matted black hair or fur, but there were a few small mammal bones – some tiny leg bones, a couple of bits of pelvis, possibly a bit of skull and some teeth. The picture below is the aggregated result from all five pellets. 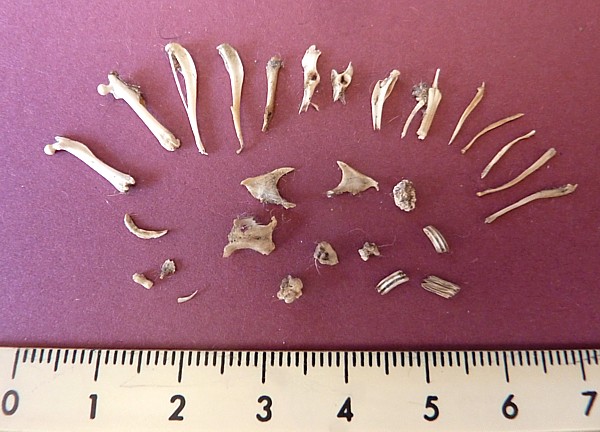 Behind St Chad’s is a wildlife area called Millbrook Park with a small wetland around Simonswood Brook. It’s only small, but the wildlife is excellent. There was a Whitethroat singing in an Alder and four young Moorhens on the pond. A Sedge Warbler was singing from the reeds. There were both kinds of Water Lilies – the big white ones and the yellow Fringed Water Lily. Masses of Field Cranesbill around the edge and Flowering Rush in bloom in the shallows. It’s fairly uncommon, mostly found in the south of England, and probably planted here. There were Water Boatmen, Whirligig beetles and a Four-spotted Chaser. Two Small Tortoiseshell butterflies basked on the path. CF noticed that the Iris plants had brown discolouration on the edges of their leaves and drew our attention to the Yellow Flag Sawfly larvae climbing skywards. 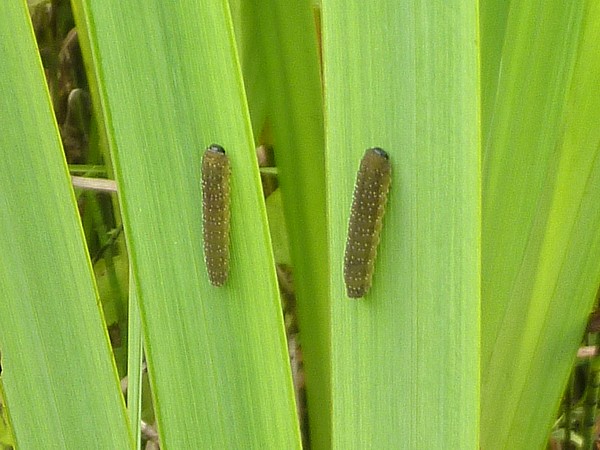 As we retuned to the Civic Centre for the bus home we saw Jackdaws and a Swallow. The Rowan berries have nearly turned red and it’s only early July!