We were joined by two MNA members today, Ron and Jim, who had been planning to visit Dibbinsdale at the height of the Wood Anemone season. 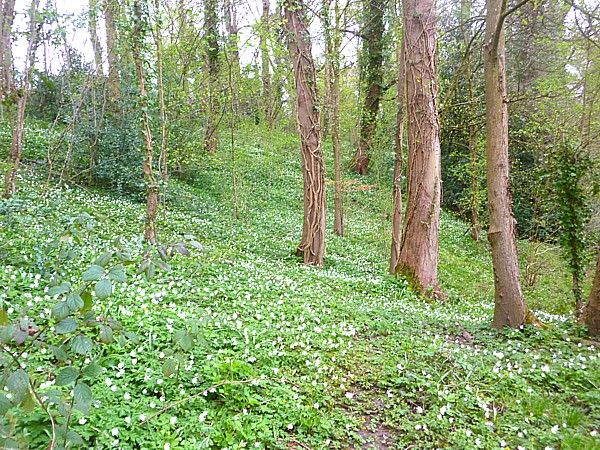 Dibbinsdale is a Site of Special Scientific Interest (SSSI) because it’s an ancient woodland. Wikipedia says it is thought to have formed part of the boundary in the 10th and 11th centuries between the Norse colony in Wirral, to the north and west, and Anglo-Saxon Mercia to the east and south.

We were greeted by a Robin at Bromborough Rake station, closely followed by a Great Tit and a Long-tailed Tit. As we started down the path into the woods we could hear a Great Spotted Woodpecker drumming. John used a stone and a fallen tree to reply, and the bird came to look at us from high in a tree. There was another one answering the drumming from a few hundred yards away. 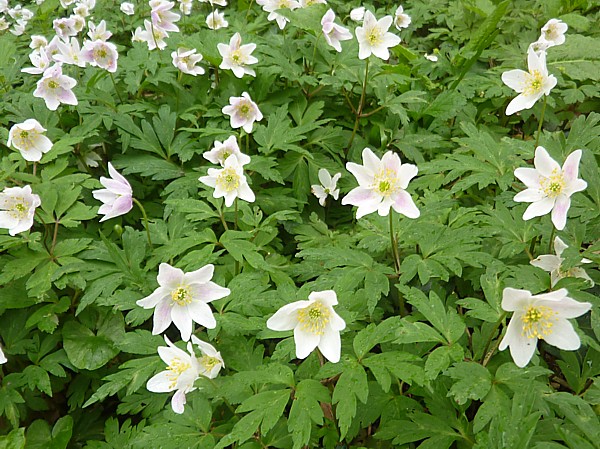 The carpets of Wood Anemones were a magnificent sight. They had Lesser Celandine amongst them, and the Bluebells were just starting to come out. They are mostly slim, and they droop to one side, suggesting that they are only lightly contaminated by Spanish Bluebells, and much purer-looking than the big bold ones in my garden!  We also noted some clumps of Dog’s Mercury, which is another indicator of ancient woodland. 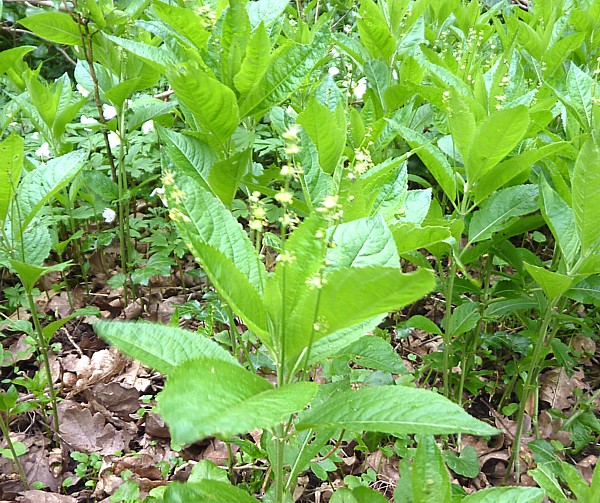 The sun wasn’t out yet, and there were a few spots of rain, but they didn’t come to much. Two Jays flew low in the woods and a Carrion Crow passed by. A Buzzard was overhead, circling and mewing. A Mistle Thrush sang, we saw Blue Tits, and there was a single Mallard down on the river Dibbin. A clump of Marsh Marigolds added a bright splash by the edge of a ditch. An Early Bumble Bee was foraging low in the undergrowth. Margaret spotted a big patch of the little flower called Town Hall Clock under a Birch tree. The flower head has “faces” on all four sides and one on the top. It loves damp, gloomy places, and is said to be common, although we rarely see it. 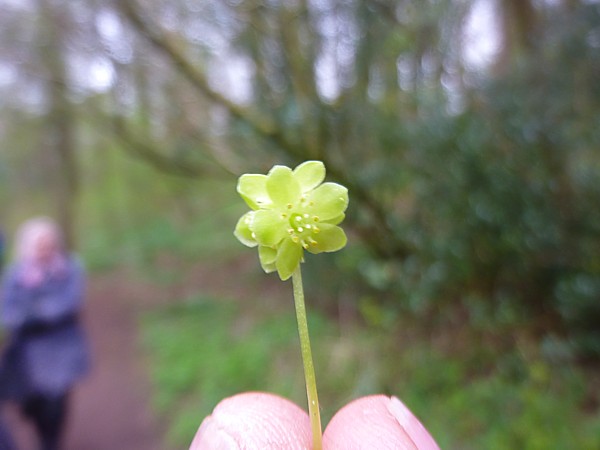 The sun came out briefly just before lunch, but not for long. We stopped to watch a Song Thrush in a gap though the trees, singing in various triplets. During our lunch stop John saw a Green Woodpecker fly over, but most of us missed it. We were looking out over the open field to the wood which was just starting to flush with green. 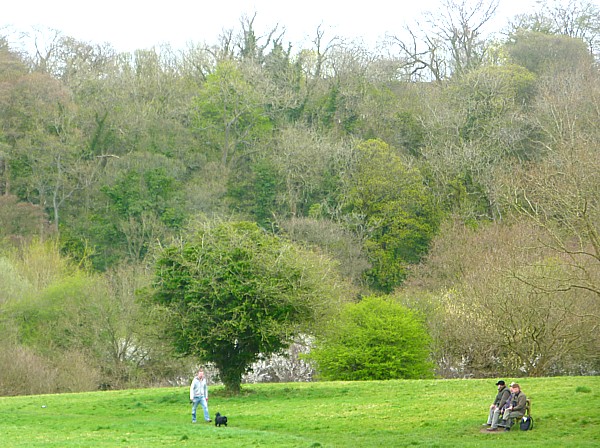 Two Dunnocks were sitting on the path and more Jays through the branches. In a damp spot there was a clump of Opposite-leaved Golden Saxifrage. 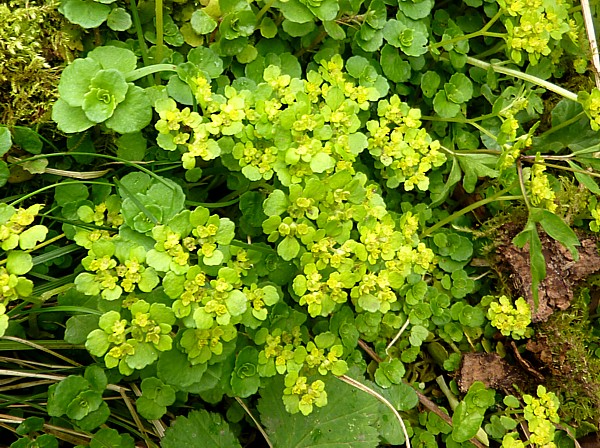 Some trees in the woods bore clusters of lime green flowers. The leaves looked like a Sycamore, but the genuine Sycamore leaves were much further out. It was some sort of Maple. 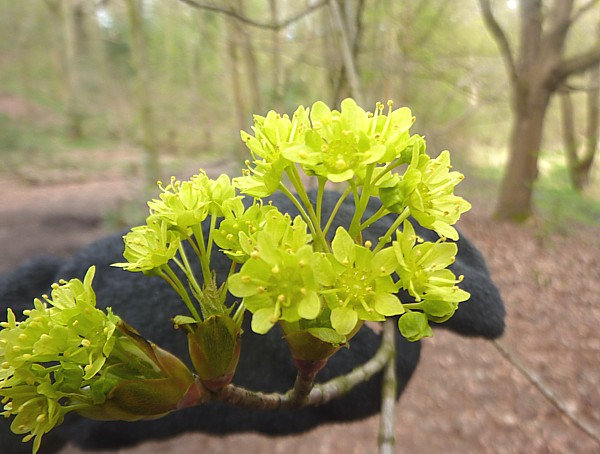 At the top of the steps we saw a Nuthatch, a Buff-tailed Bumble Bee searching for a nest hole and a Chiffchaff, which flew out giving us a rare good view. A Blackbird was softly repeating its alarm call in a high hedge. Sometimes that means there’s an owl about, but we couldn’t see anything. Finally, the sun came out properly, and on a sunny bank there were Daisies, Speedwell and Dandelions, several Ladybirds warming up, a Carder Bee,  a Peacock butterfly and another Bumble Bee, probably a Buff-tailed this time. I also took a picture of this insect, the size of a big wasp, but it’s probably some sort of fly. (Added later: Sabena tells me “it’s a species of hoverfly called a Tapered Drone Fly Eristalis pertinax. Similar to  E. tenax, this species has a more tapering abdomen in the male and it also has pale front legs that you can see in your photo. “) 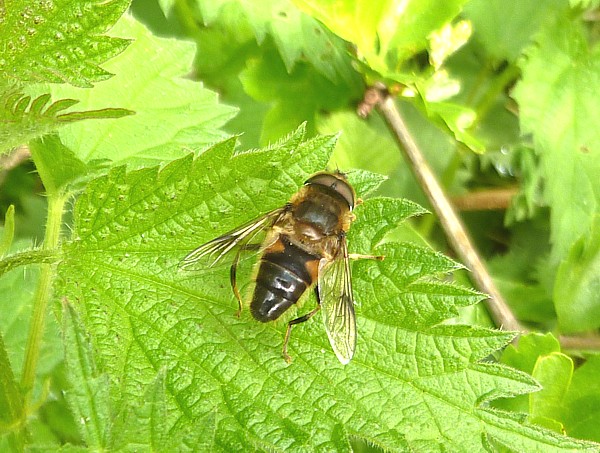 Bats hibernate in the boarded-up tunnel from October to April, and there is a sign warning that they are protected. On the other side of the brook was our first Garlic Mustard and at the other end of the tunnel there was more Marsh Marigold, reflected prettily in the water. 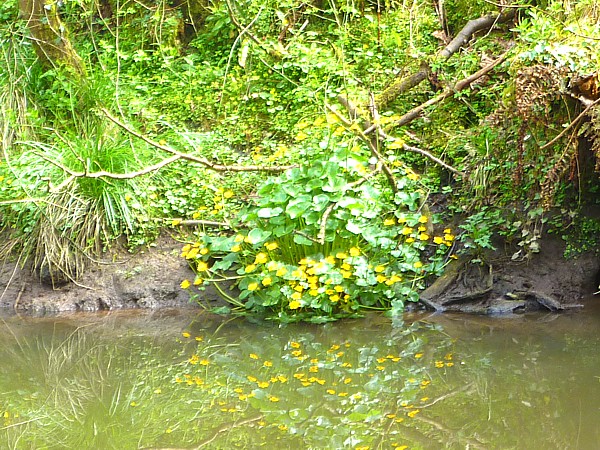 Cuckoo flower was blooming on several logs in the pools. Does it grow like that naturally or has it been planted?  It and Garlic Mustard are the food plants of the Orange-Tip Butterfly, so we started keeping a lookout for one. 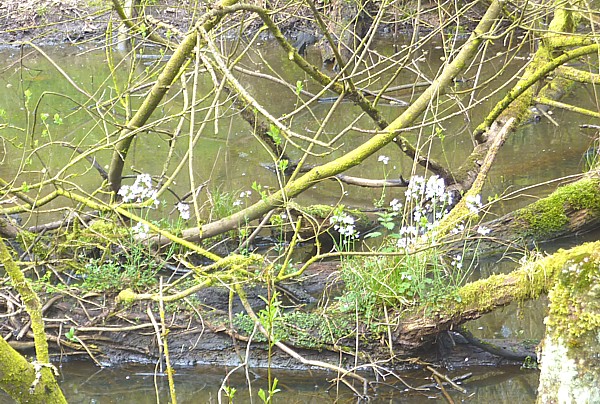 Confusingly, a Nuthatch was going up a tree like a Treecreeper.  By another prominent tree on the edge of the steep valley we could hear a pecking noise. We stopped and listened and it definitely seemed to be coming from the other side of the tree, almost in arm’s reach. Was it a Great Spotted Woodpecker pecking for food, or attacking a tree hole or nest box? There was another nest box visible nearby which had definitely been “got at”.

Woodslee Pond had a Moorhen on a nest, made where some tree branches dipped into the water. I don’t think I’ve seen a Moorhen’s nest before, just Coots. There were also some artificial floating islands, and a Mallard was sitting on eggs on one of them, which kept on rotating in the breeze. She at least had a constantly-changing view! 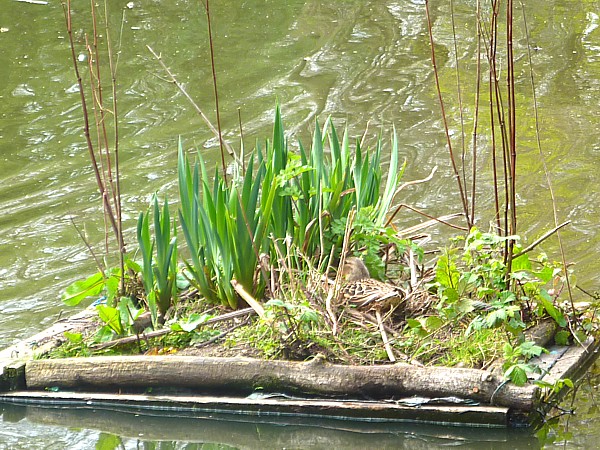 The Ranger Station had a sign up about Water Voles, saying they have a small population, although there used to be many more. The problem is habitat fragmentation caused by both flooding and drought. They are working on wetland restoration, and use local conservation students to do annual surveys. We left some MNA leaflets there, and admired their stuffed Hedgehog, the display of “replicated taxidermy” butterflies and a wall full of children’s paintings of wildlife. 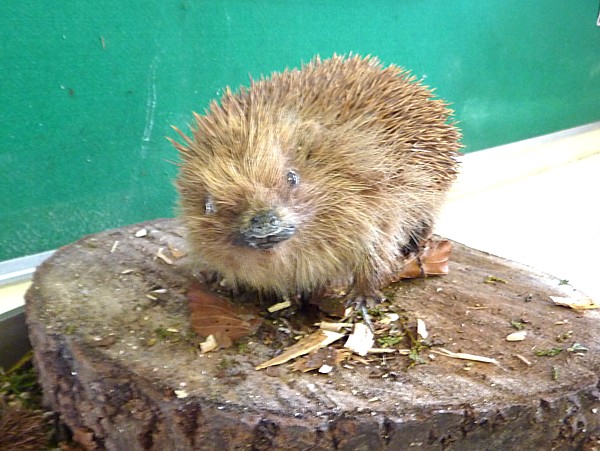 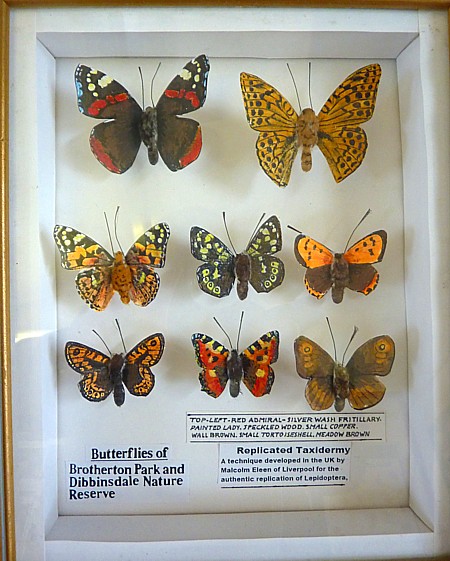 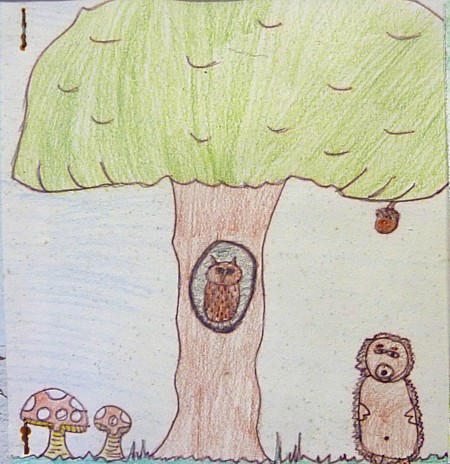 Their walled garden had a large patch of Cowslips. 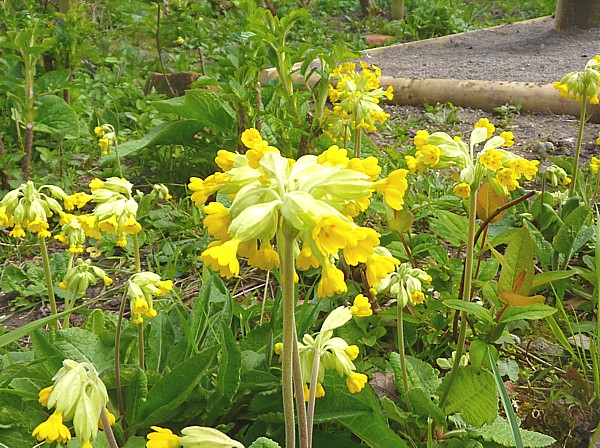 Near St Patrick’s Well  Wild Garlic was just budding, a Wood Sorrel was in flower and there was a patch of white Bluebells. At the back of the well Herb Robert was clinging to the vertical wet wall, above masses of Liverwort. Then Ron called – he’d seen an Orange Tip sunning itself on a leaf. It was probably newly emerged from its pupa and was a stunner. 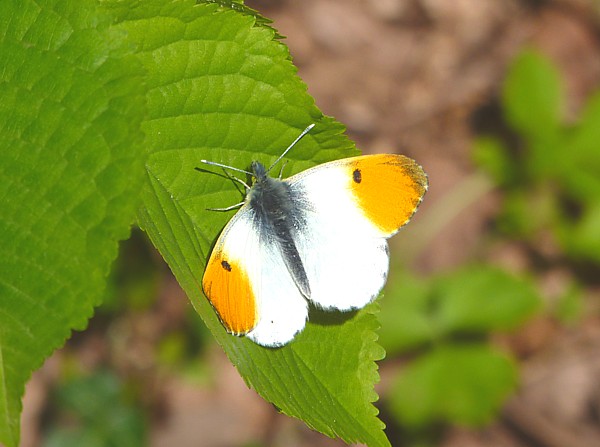 Then we walked up to Spital station, admiring the flowers and shrubs in the sunny gardens.

Public transport details: Chester train from Central Station at 10.15, arriving Bromborough Rake at 10.35. Returned on the train from Spital at 3.07, arriving back in Liverpool at 3.30.