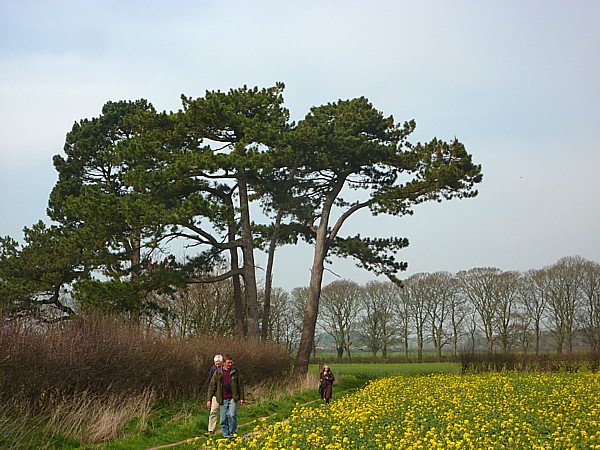 Today was much warmer, although it was overcast and hazy as we set out. From Thornton Hough we walked via Crofts Bank Cottages through field footpaths to Brimstage, then back a different way over half a dozen stiles. Most of the fields were planted with oilseed rape, with some not flowering yet and some just coming out. 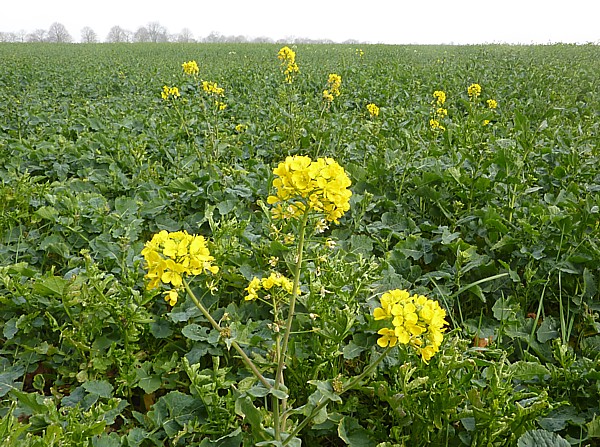 The sides of the paths were bright with Lesser Celandine, whose flowers opened fully when the sun eventually came out. The number of petals on the flowers is very variable, and we counted between 8 and 14. 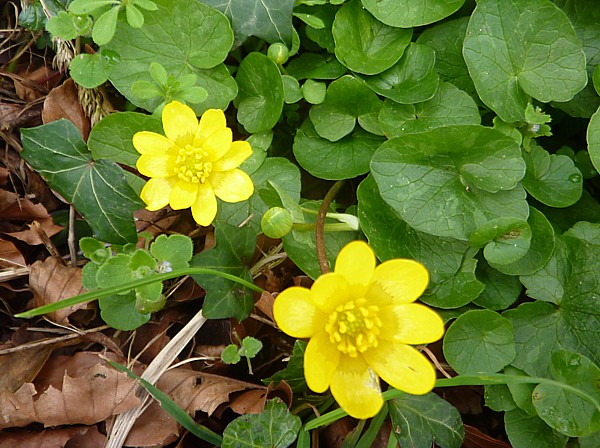 Along the edges of the crops a pretty little Speedwell was growing, probably Common Field Speedwell. Also spotted were Red Dead-nettle and the orange seed clusters of Iris. 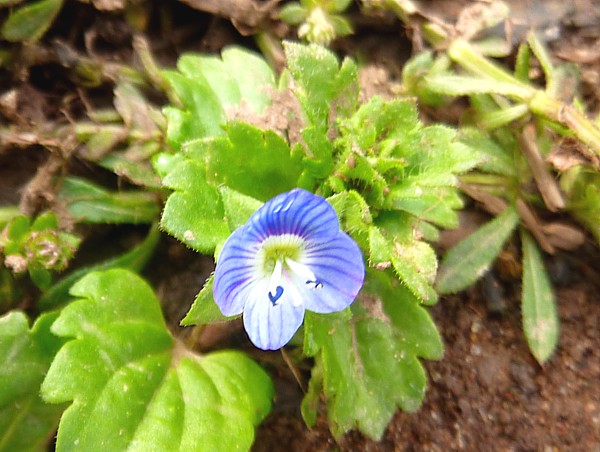 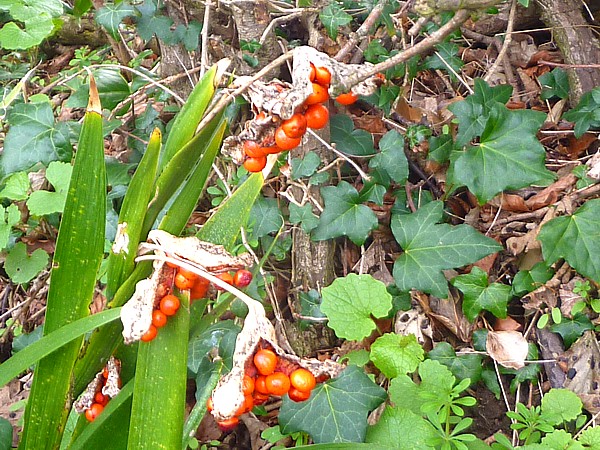 Rooks were cawing from the rookery by Thornton Hough church, a Buzzard flew low over a field, Chaffinches and a Song Thrush were singing. We saw a Wren, Blue Tits, a Heron, a few Tree Sparrows, a Dunnock and about three dozen Fieldfares in a far tree. Skylarks were pouring their hearts out overhead and John heard a Yellowhammer along a hedge.  A Magnolia tree was just starting to flower in a farm garden. 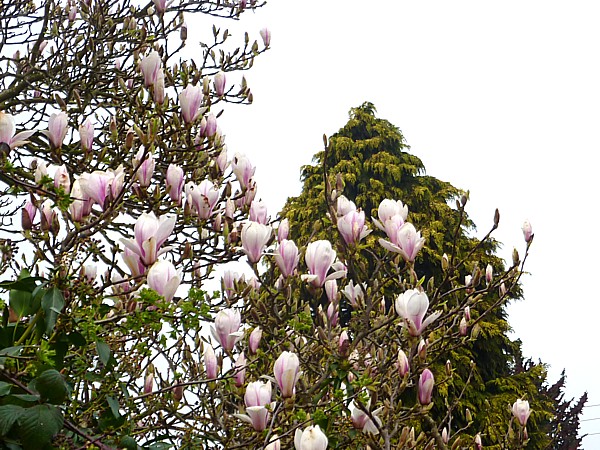 Along a path near our lunch spot there was Hawthorn on the left, the new foliage showing bright green, but no flowers yet. By contrast, on the other side was a Blackthorn, all flowers and no leaves. There was a Honeybee on one of the flowers and a Chiffchaff was calling overhead. 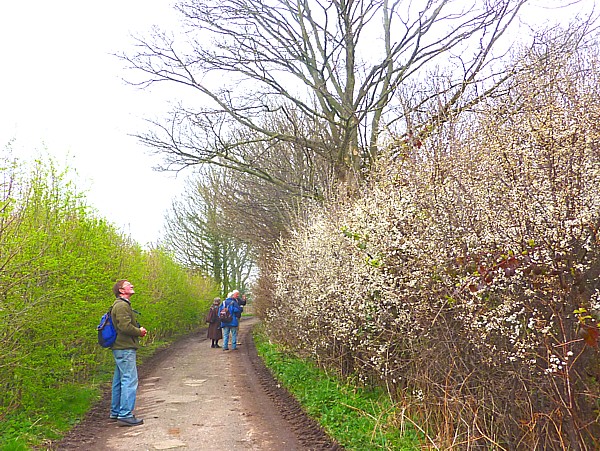 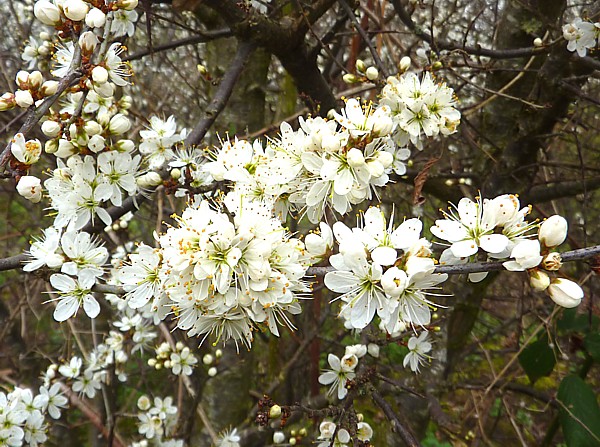 Out of the back of the trees flew a Great Spotted Woodpecker, and we heard the creaky call of a Pheasant. By the side of the path here is a great mound of bare red earth, higher than our heads, with beehives on the top. In the flanks were holes of various sizes. Some might have been rabbit holes, but one was bigger, possibly made by a Badger. 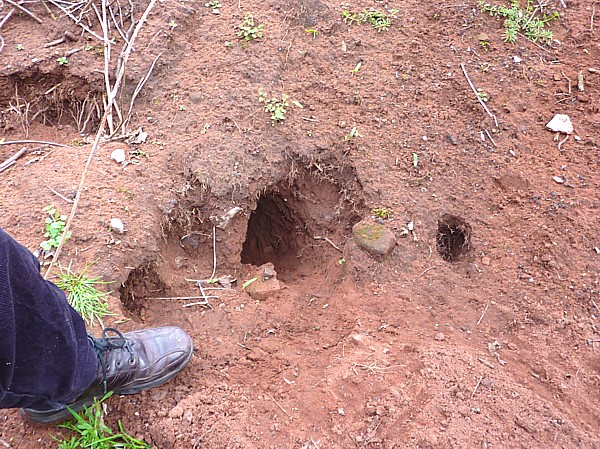 On the earth below was a single pawprint. Badger? We couldn’t see any claw marks, so it probably wasn’t a dog. 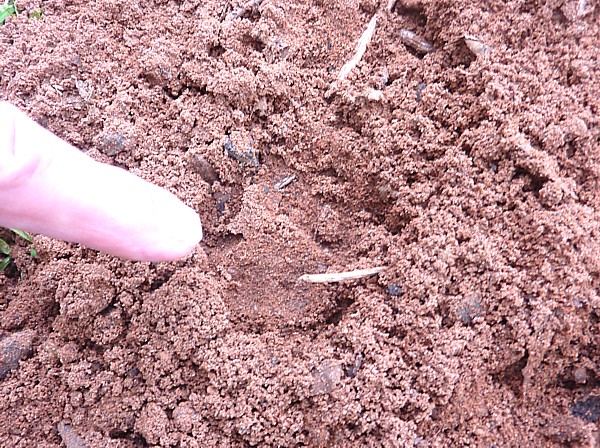 We had lunch perched on two huge tractor tyres. A Blackbird and some Long-tailed Tits passed by us and a Chiffchaff was calling long and persistently. There were Carrion Crows investigating a muckpile. By now it was really hot and sunny, and we had to remove some layers. 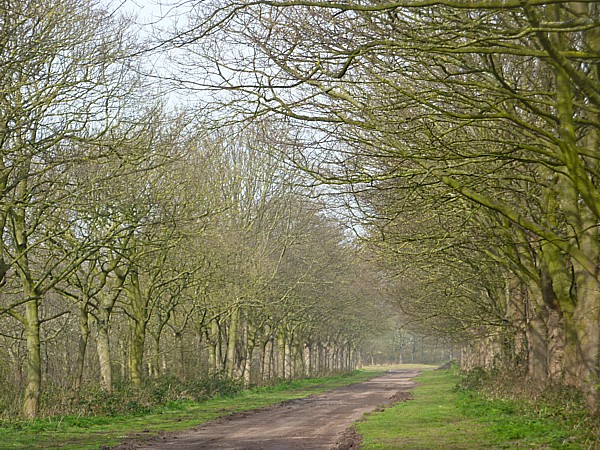 On the way again, we noticed that Small Tortoiseshell butterflies were about, and there were parties of Linnets flying in front of bare trees. A bird was going wheep, wheep, wheep, which puzzled us for a while, but as usual with an odd bird call, it turned out to be a Great Tit. When it changed to teacher, teacher we recognised it, and then we saw it.  Half a dozen Wolf Spiders were basking by a field margin, but they all scurried away before I could take a picture of them. Towards Brimstage we heard a Greenfinch and there was a Pied Wagtail on the roof. Disappointingly, there were no Brown Hares today in their usual fields, but we were compensated by the most interesting sighting of the day – a great cluster of 7-spot Ladybirds, perhaps 40 or 50 of them, on cut branches of lichen-encrusted trees. A few pairs were mating, but most were torpid and basking in the sun. 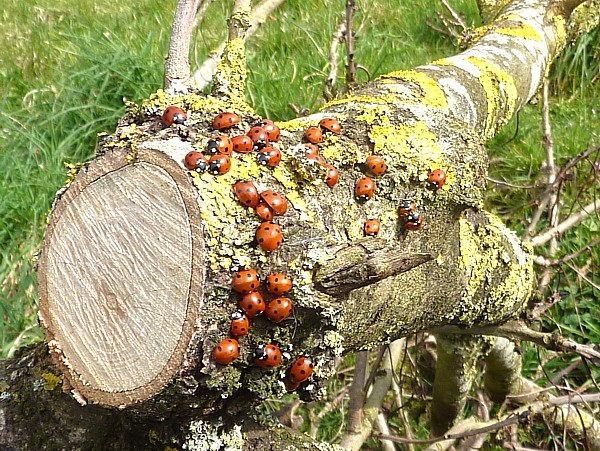 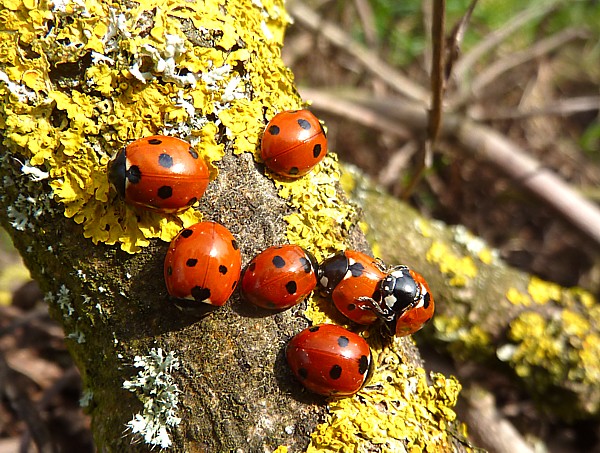 Close by Brimstage we noted a Nuthatch, and there were Jackdaws on the roofs. It was too early in the year for Swallows to be nesting under the archway. Around the back someone had put out a basket of free-range eggs for sale on the “honesty” system. All the eggs were gone and there was money in the pot. 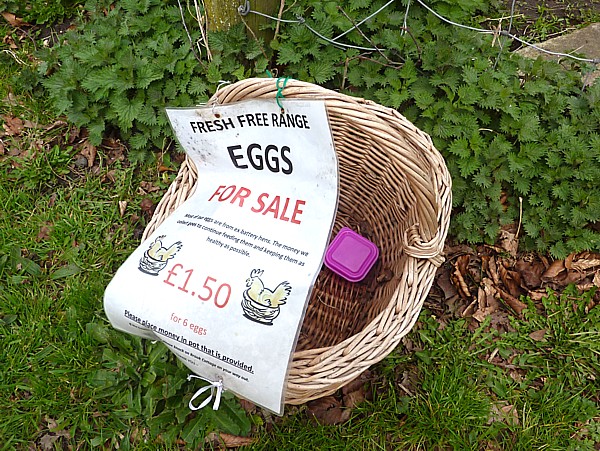 The bridleway leading back to Thornton Hough is damp and shady, with a water-filled ditch on the right.  Near the base of a big old Ivy-covered Beech there was a huge bracket fungus. It was about a foot across, nine inches deep and very dark. Despite it’s blackness I think it might be a very old Artist’s Bracket, Ganoderma applanatum. Plantlife says it’s often found near the base or on the stumps of old Beech Trees, which would fit. 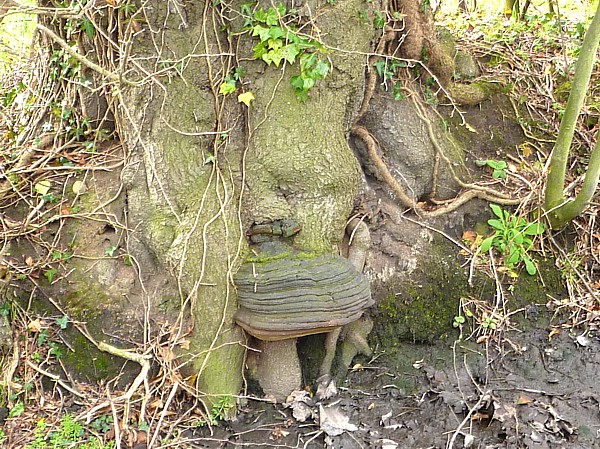 A small moth was fluttering in the water of the ditch, trapped and drowning, so we fished it out with a stick. David B said he thought it was a Noctuid Moth, but as there are 35,000 known species, there’s no chance of me identfying it. All I can say is that it was a plain pale brown moth. 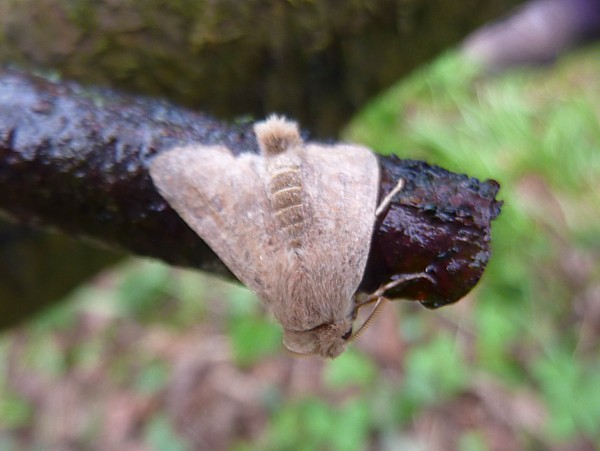 There were lots of people walking dogs. One man seemed to have about twelve of them with him! Maybe that’s why we saw no Brown Hares today. David B reckoned that we’d heard five different Chiffchaffs singing along our route, one from a pine tree, which is unusual. Near Thornton Hough there are two big Eucalyptus trees, one on each side of the path. 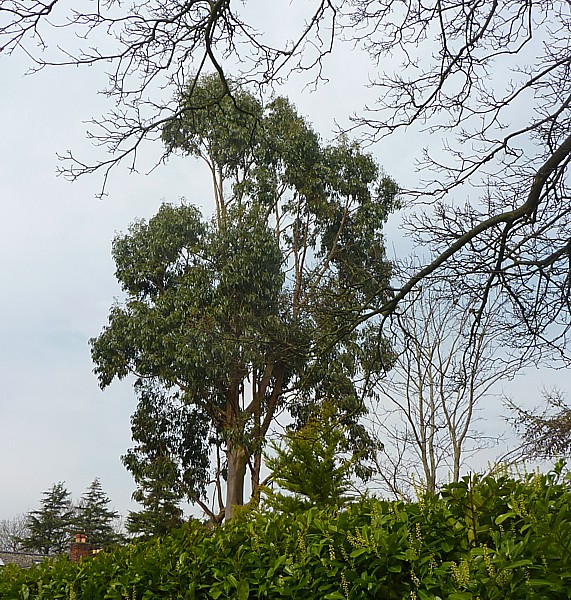 In the farmyard we came across a Peacock butterfly sunning itself. 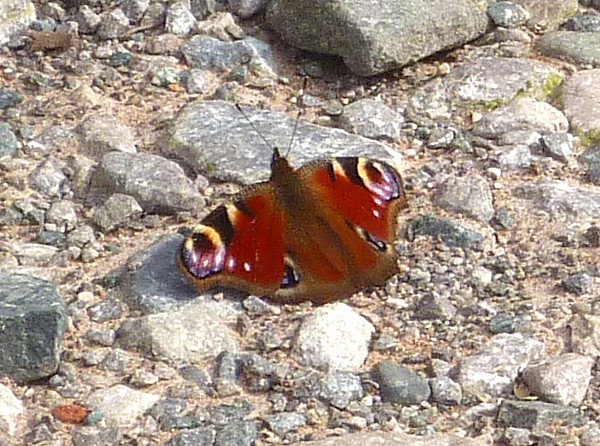 Over the barn roof there was a glimpse of the huge mature Chilean Pine (Monkey Puzzle), next to the Rookery in the tall trees around the church. 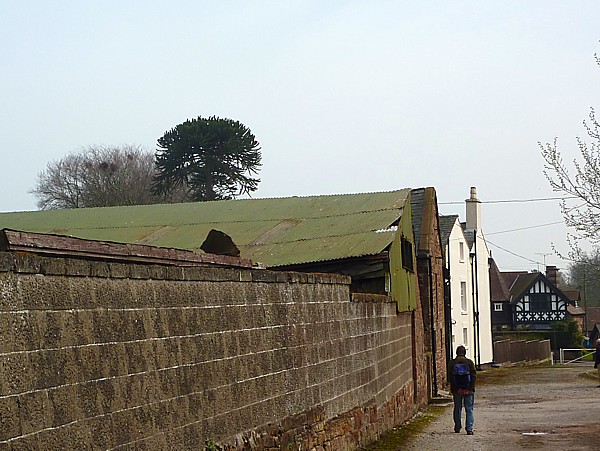 Then we sat in the sunshine outside St George’s United Reformed Church, waiting for the bus.