Another sunny day, which may be the last fine day before the autumn starts in earnest. We went to Eastham Village to see the old Yew tree there, which is probably the oldest tree on Merseyside. 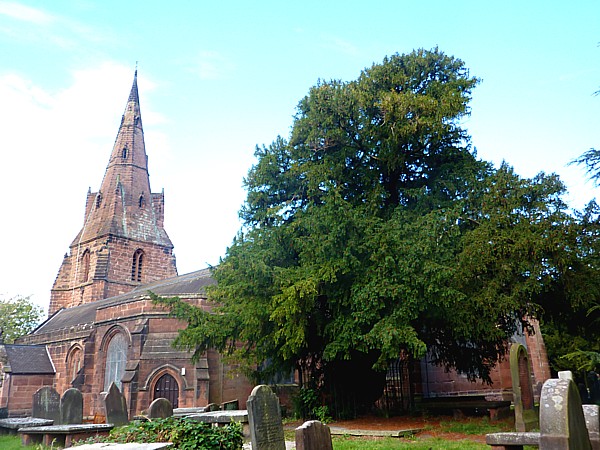 Believed to be about 1600 years old, it may once have stood beside the earliest wattle-and-daub church and may have germinated soon after the Romans abandoned the north west of England in 383 AD. When the manor of Eastham changed hands in 1152,  the villagers asked the new owners to “have a care of ye olde yew”, which was then about 750 years old. It is a female tree and still fruiting vigorously. 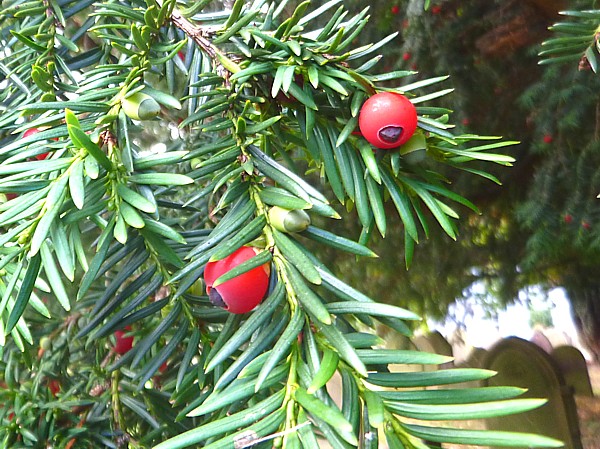 Eastham churchyard has many other fine old trees, and one notable younger one. A plaque notes that this small Yew was planted on 21st June 1887 to mark Queen Victoria’s Golden Jubilee. It appears to be a Golden Yew, which is appropriate, and it’s now 126 years old. 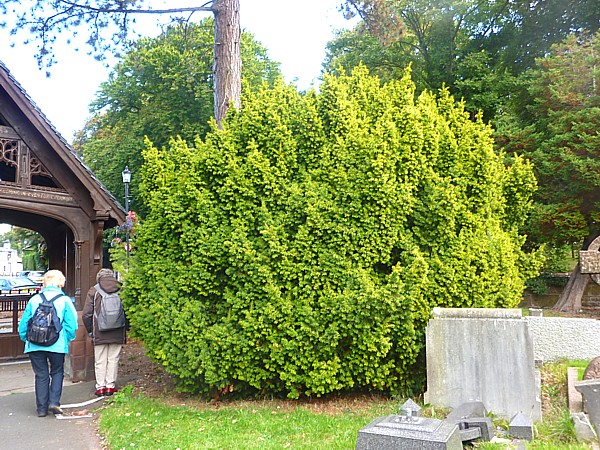 Despite being momentarily distracted by a Sparrowhawk overhead, we were delighted to find a Horse Chestnut tree full of ripe conkers in the park off Ferry Road. They were falling all around us and we started to behave like kids, picking up the best and brightest of them and stuffing our pockets! 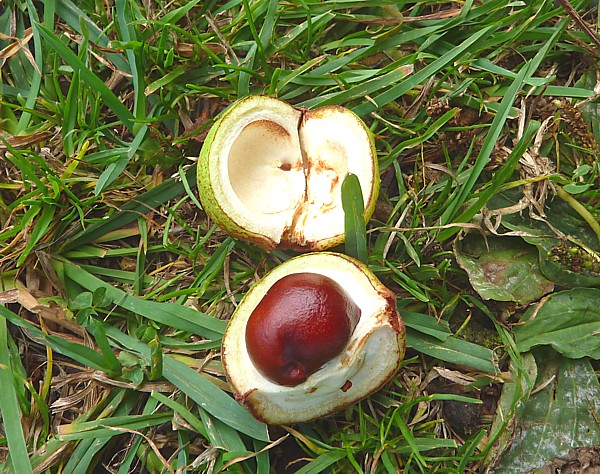 It’s a very good year for all tree seeds and nuts. As well as the conkers, there were ripe brown acorns falling in Eastham churchyard, and as we walked past the Golf Club we crunched over Beech mast on the pavement. 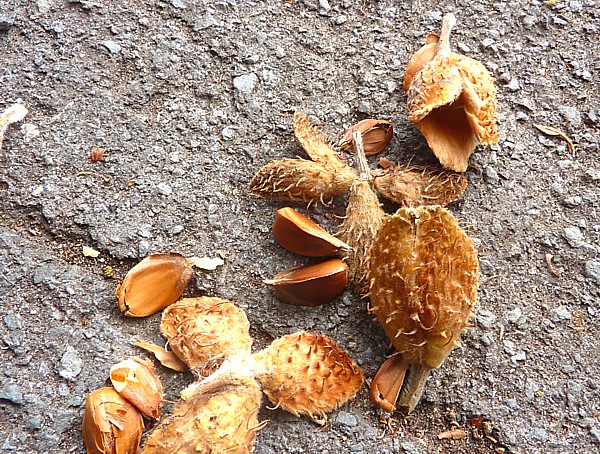 Unusually, the Beech nuts have formed this year, instead of being merely empty brown skins. We are having a “mast year”. The word “mast” comes from the Old English word “mæst”, meaning the nuts of forest trees that have accumulated on the ground, especially those used as food for fattening domestic pigs. Mast years are thought to be caused by a good spring and an abundance of pollinating insects, although it may just be a strategy by the trees to ensure some of their seeds survive. See this article in the Telegraph (from after the paragraph about strawberries, when it starts to say more about nature and less about farming and gardening.)

We lunched in Eastham Country Park then went to check the bird feeders at the back of the Visitors’ Centre. They were unusually quiet, with just Chaffinch, Great Tit,  Blue Tit and Dunnock. Perhaps it has something to do with the current abundance of natural food. Then we hunted down the “Great Oak” on the far side of the car park. At first we thought it might be this one, but it’s far too young – this one is about 250 years old and in its prime. 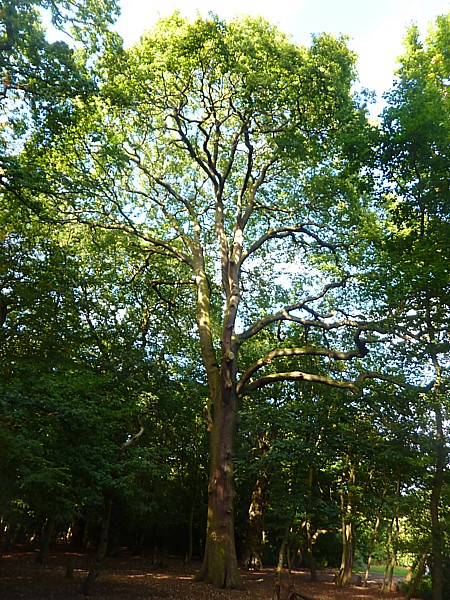 The Great Oak is a few yards away. It’s the biggest Oak on the Wirral. In the early 1990s its girth was 17 ft (5m), and we measured it at 17 cm more than that, so it’s still growing. A bore test has shown it is over 500 years old, so it was young in the early years of the Tudors. It has lost a big lower branch recently and seems to be nearing the end of its days. 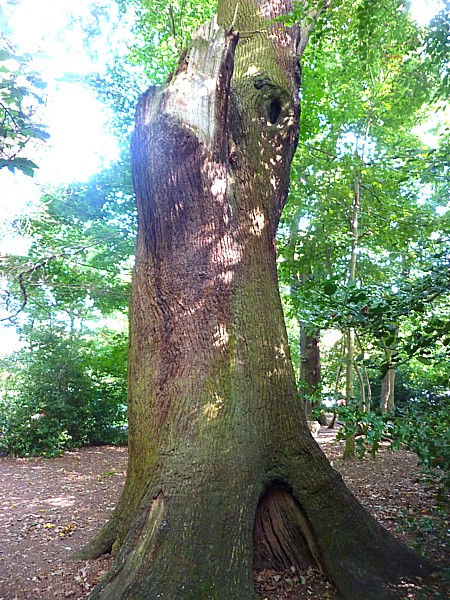 Nearby is this collection of wood sculptures, a Teddy Bear’s Picnic. 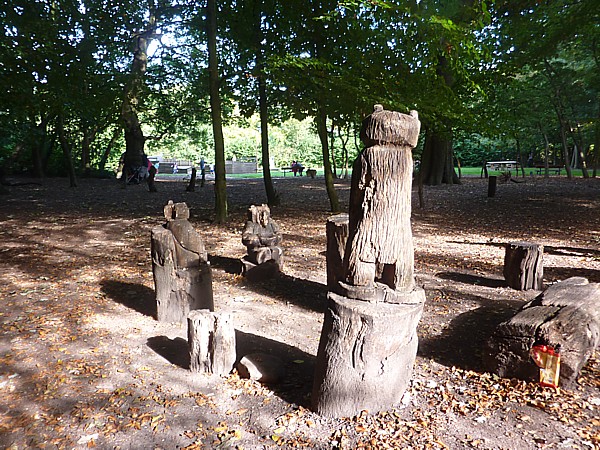 At the junction of the paths on the north side of the Leverhulme sports field is the ruin of what was once Wirral’s largest tree, a Beech which was 80 ft high (24 m) at the end of the 20th century, but is now a great dead stump with fallen branches all around. It’s being left to rot to enrich the woods. 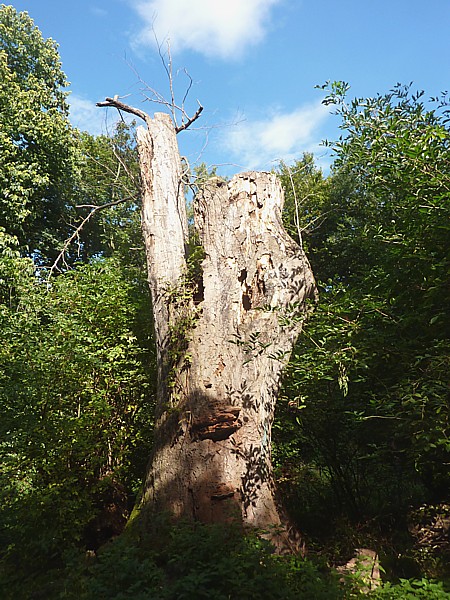