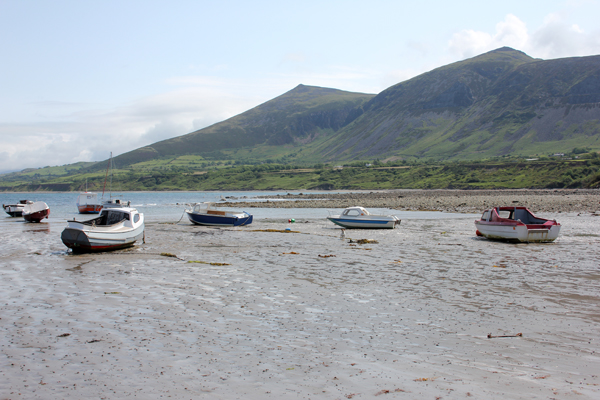 Escaping from work for the day Richard Surman kindly drove Dave Bryant and I to the Llyn Peninsula in Gwynedd, North Wales. Our first stop was the small fishing village of Trefor. The tide was out leaving the fishing boats resting on the wet sand beside the harbour wall. 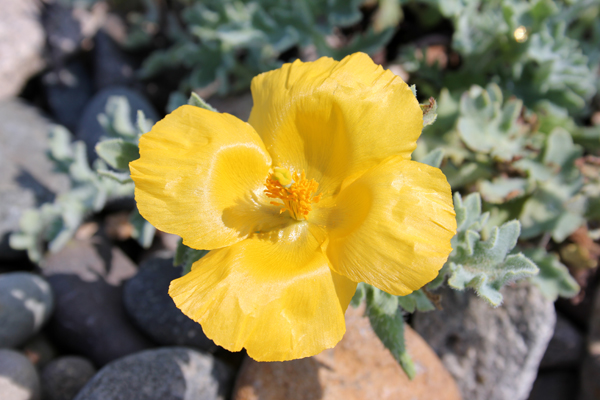 A small meadow area held a few Butterflies with Common Blue Polyommatus icarus and Meadow Brown Maniola jurtina along with half a dozen Six-spot Burnet Zygaena filipendulae including a mating pair. 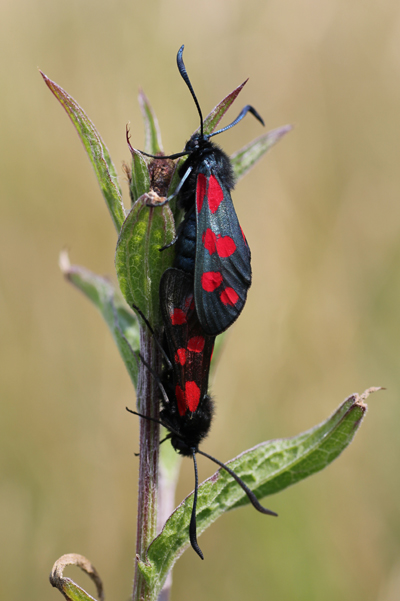 A gathering of Herring with a few Great Black Backed Gulls was on the beach and a few close Gannets flew by on the sea. Blackcap and Chiffchaff were singing and Greenfinch uttering their wheezy call from bushes on the path, a Rock Pipit was noted, Jackdaws were chacking and House Martins circling over the village. 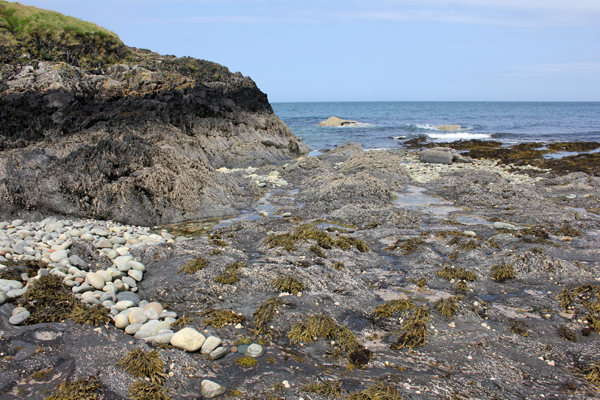 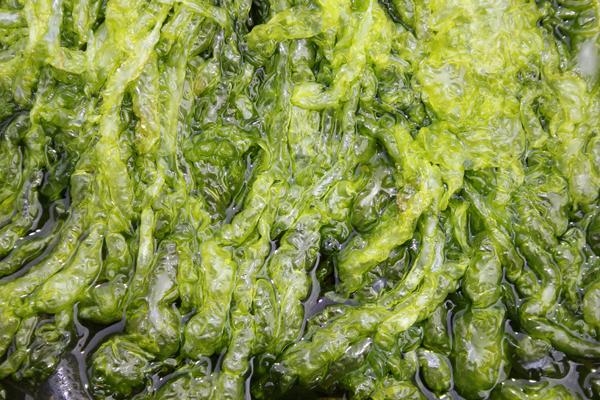 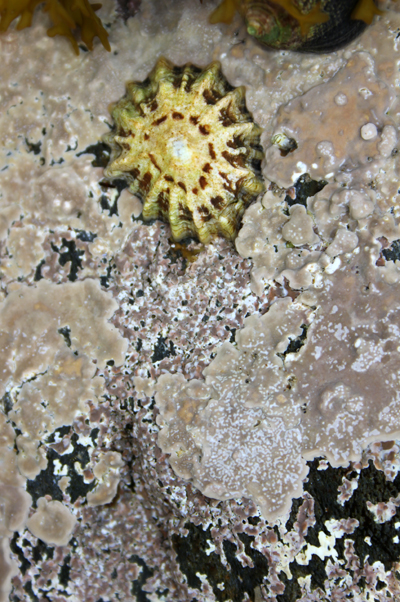 Black-footed Limpet on Bed Of Lithothamnia 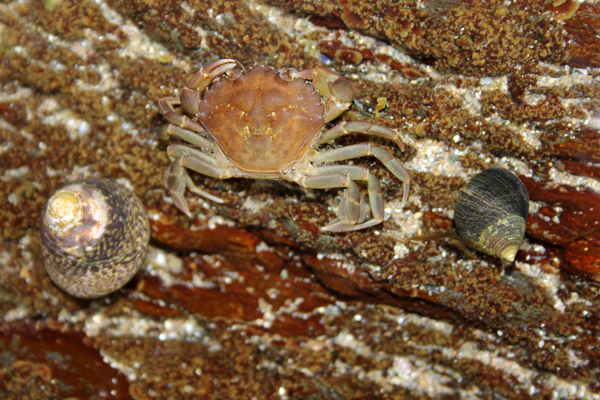 Our next stop on the Llyn Peninsula was at Pistyll, close to Nefyn. We wandered down to St Beuno’s Church – the original church was established here by St Beuno in the sixth century with the present building completed around the twelfth century and was popular with pilgrims as a stop-off on their way to Ynys Enlli – Bardsey Island. The floor of the church was strewn with rushes and sweet smelling wild herbs and pots held Red Valerian Centranthus ruber. 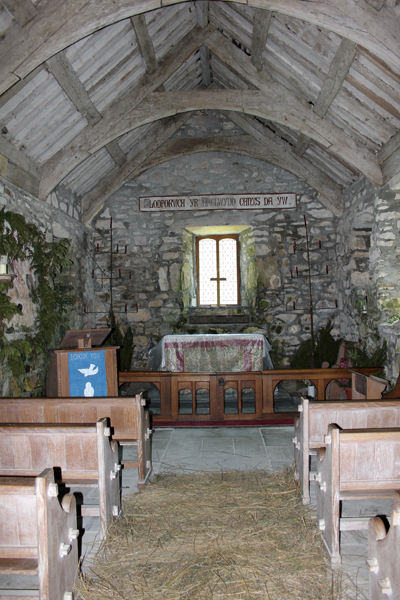 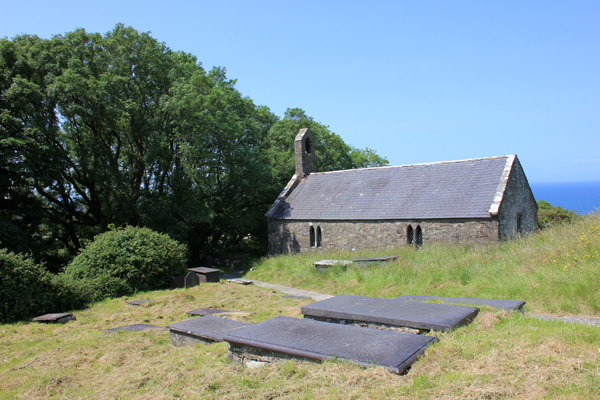 We ate lunch in the graveyard with stridulating Common Green Grasshoppers Omocestus viridulus in the grass, a few Meadow Browns Maniola jurtina and a lone Ringlet Aphantopus hyperantus proving camera shy. A few Goldfinches were twittering in the trees, a Buzzard was circling and House Martins were zooming around.

We wandered along the Wales Coast Path, crossed through a field of sheep and exited a gate before descending down the steep cliff path to the beach below passing a wind-sculpted Hawthorn bush Crataegus monogyna and watching a few Pied Wagtails in the stream. 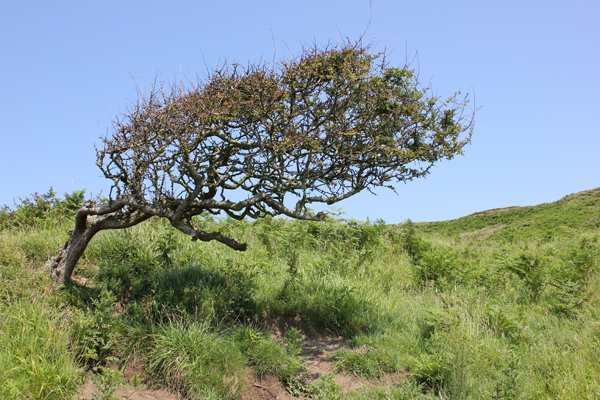 The shingle beach comprised of some quite large pebbles at the top that were graded down to smaller pebbles close to the waterline – these were slightly easier to walk along – only just! 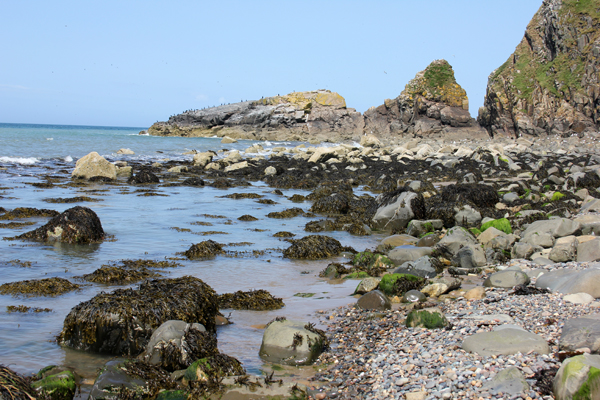 We stumbled along the beach towards Birds’ Rock ‘Craig yr Adar’ – the majority of the cliff adjacent to the beach was composed of Boulder Clay and there had been a few large landslips.  Even larger boulders as stepping stones as we approached Birds’ Rock – Herring Gulls and Great Black Backs took off from the beach and the Cormorants on the main rock headed to the water. 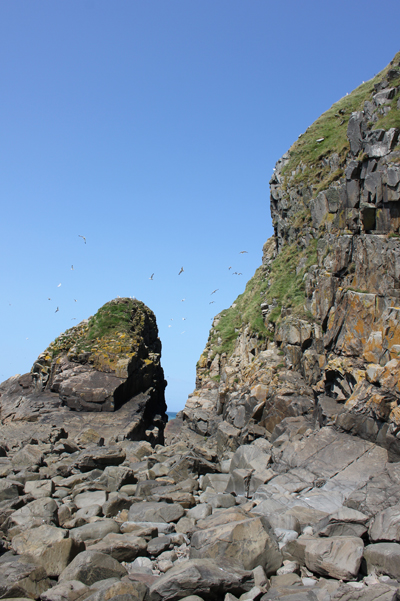 It was a bit too dangerous to clamber over the rock to view the main seabird cliffs round the corner so we had to be content watching the continual passage of Razorbills and Guillemots to and from the cliffs through our bins. A mooch around the rock-pools revealed a scattering of Beadlet Anemones Actinia equina and similar species to those at Trefor: Grey Topshell Gibbula cineraria, Common Periwinkle Littorina littorea, Common Limpet Patella vulgata etc. 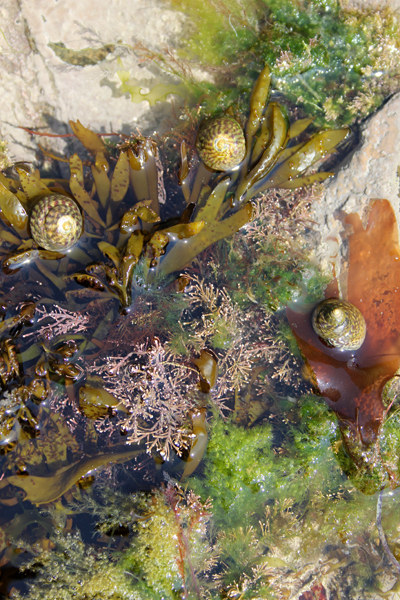 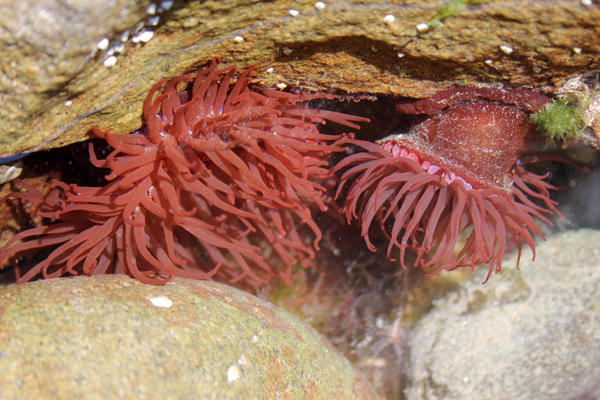 As we headed back along the beach we found a huge specimen of Furbellows Saccorhiza polyschides with undulating wings on the bottom of the stipe and a bobbly looking that attaches the Kelp to boulders in the sea.holdfast . There was also Sea Belt Laminaria saccharina this Kelp has a distinctive frilly undulating margin along the long fronds. 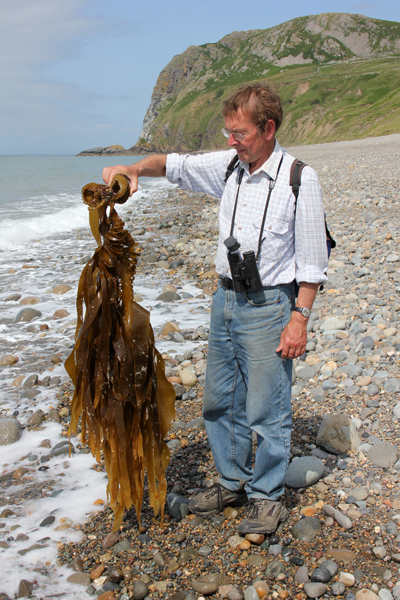 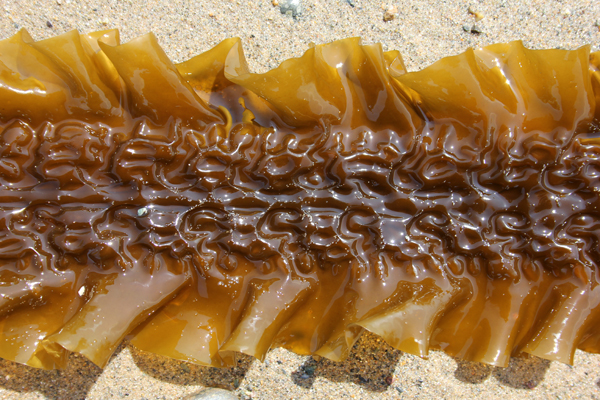 We climbed back up the cliff and again followed the Coast Path passing some rather confident sheep with their grown lambs that we had to shoo out from nestling in the field gates in order to pass through. 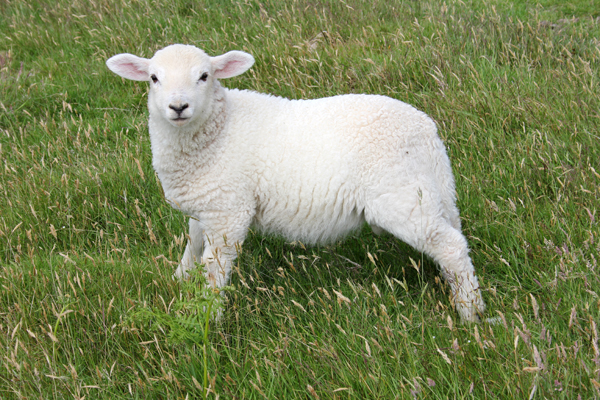 A Peregrine cried from its perch on a scree slope and a few Ravens croaked overhead. The stone wall that meandered its way adjacent to the path provided a vantage perch for the numerous Wheatears numbering over thirty individuals – it was encouraging to see that many of these were juvenile birds. There were also a good number of Stonechats, Whinchats and Linnets perched on the walls and Meadow Pipits were still indulging in their parachute display flights. We watched a male Dor Beetle Geotrupes sp. hopelessly chasing after a female – pausing only briefly to examine a pile of cow dung. A smaller than usual Small Heath Coenonympha pamphilus was noted along with a mini Common Red Soldier Beetle Rhagonycha fulva. A good find of a Bird Pellet – shimmering blue-black from the numerous Beetle elytra (the hardened outer wings) it contained.  Little Owls regurgitate pellets containing obvious Beetle elytra but this pellet was too large to be theirs measuring 4.5cm x 1.5cm. 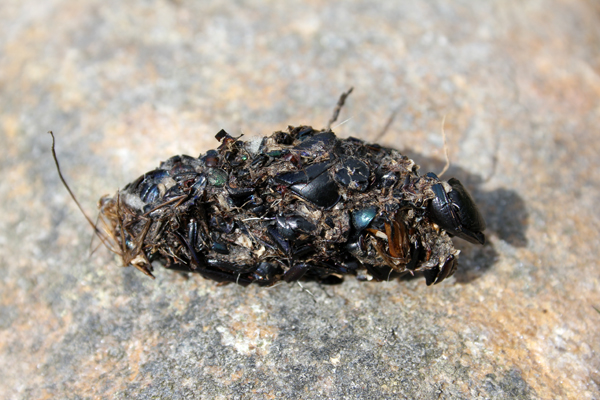 Three Choughs flew over uttering their distinctive call – DaveB went off-roading and observed a pair – one of which was colour ringed – feeding a loudly begging youngster and also saw a sun basking Common Lizard Lacerta vivipara. 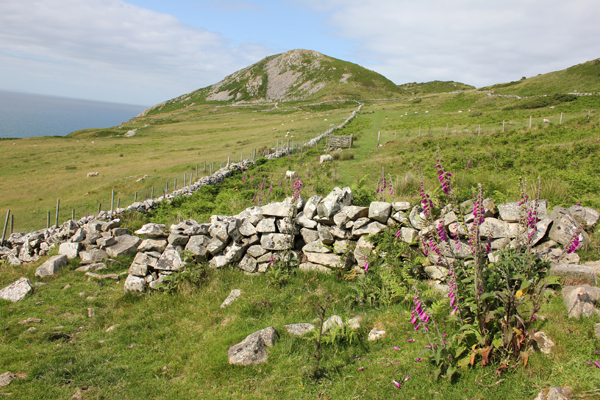 We re-traced our steps back along the Coast Path watching a flock of ten Mistle Thrushes taking flight from some Hawthorn bushes, two Choughs feeding on one of the Yellow Meadow Ant Hills Lasius flavus and as a finale four Magpies – unusual in these parts in a field beside the car and five distant Chough tumbling in the air.

A hedgehog slowly ambling across the road close to DaveB’s house was a nice end to the day.  The hog is known to one of DaveB’s neighbours and will even curl up with her cat. 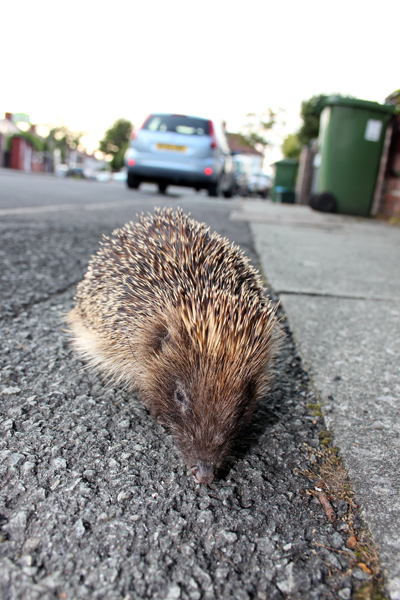 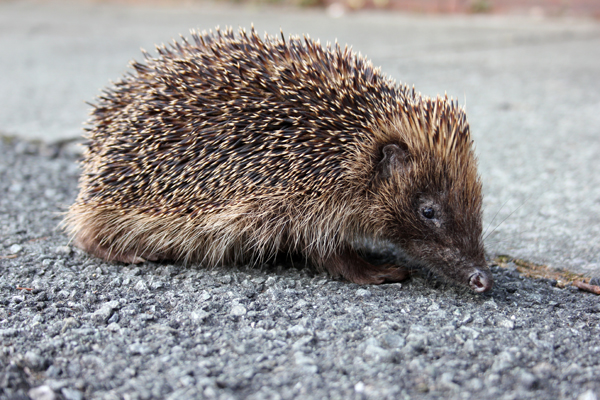